Well, I’m finally back home in Chicagoland after a journey around the world from my teaching gig in Korea.  I’ve finally found some time to sit down and pound out some classic Mastication Monologues posts that all of you have been missing.  This post is the beginning of a trip to Ulsan.

The best place to go for lunchtime would be around Daegwangam beach since they had women divers who ventured out into the water, brought their  still wriggling catch to their cooking shack, and prepared it with sushi chef like precision. 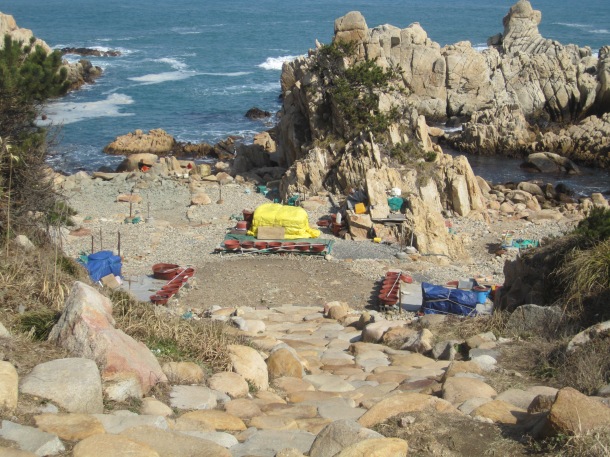 Unfortunately, they seemed to be closed and too busy bobbing about in the sea.  Thankfully the area had some breathtaking views. 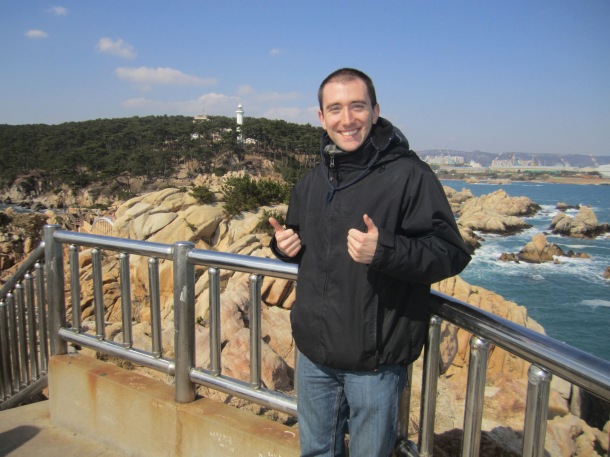 After having a brief constitutional on the beach, we made our way to Ulsan city proper to a fish restaurant that specialized in whale.  Given that I had already tried whale in Japan, I wanted to have something else that the restaurant did well.  They recommended I get maeuntang and mulhwoe which I naturally agreed with since I’m just the waygookin (foreigner).  Before the main entrees came out, they supplied me with typical side dishes, but a couple were different like a plate of peanuts. 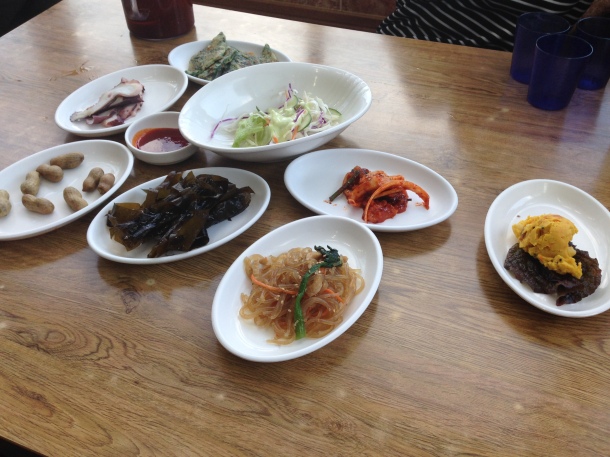 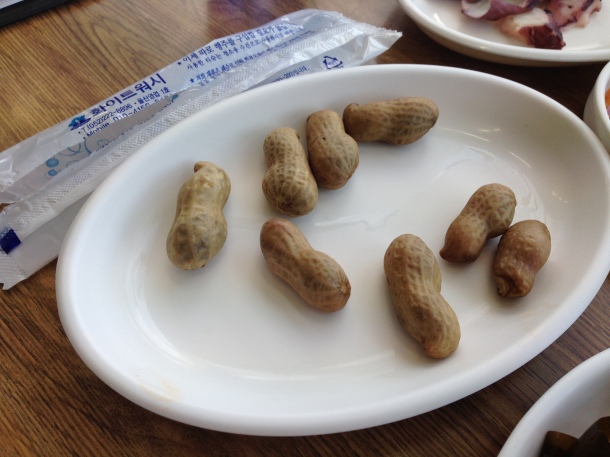 I didn’t think Koreans ate peanuts since I’ve never seen them being sold in the grocery store, but these were different from what I was used to since they were boiled.  I knew other cuisines like some African recipes and even some parts of the American South eat boiled peanuts, but this was a first for me.

They were oddly purple and slightly soft.  I think I’ll stick to the traditional crunchy ones.  The dishes eventually came out which didn’t scare me as much as her description of the main dish as sushi mixed with bibimbap.  I’m not a huge fish fan, so I was surprised when I found I really enjoyed both choices.

My mulhwoe consisted of a big bowl filled with pink, tender slices of fish, sesame seeds, an avalanche of radishes or some sort of root vegetable, and a hefty helping of green onions.  Similar to bibimbap, it came with a side of gochujang or chili sauce that I slathered on my fish molehill, but this one was a bit different compared to the sauce served with warm bibimbap in the sense that it was thinner in consistency and sweeter. 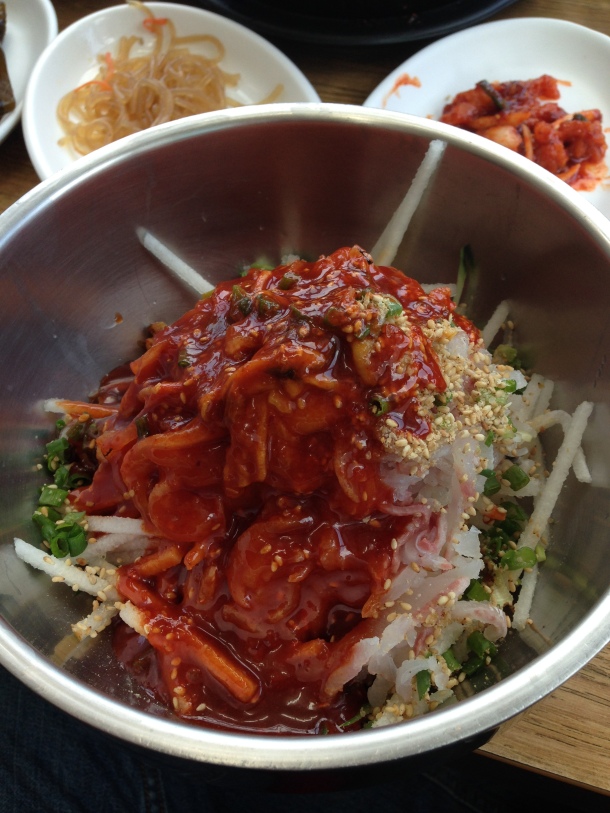 As for the maeuntang, it lived up to its name in Korean as a spicy soup that was filled with large chunks of flaky white fish pieces with the bones still in per usual in Korean cooking and lots of onions and peppers. 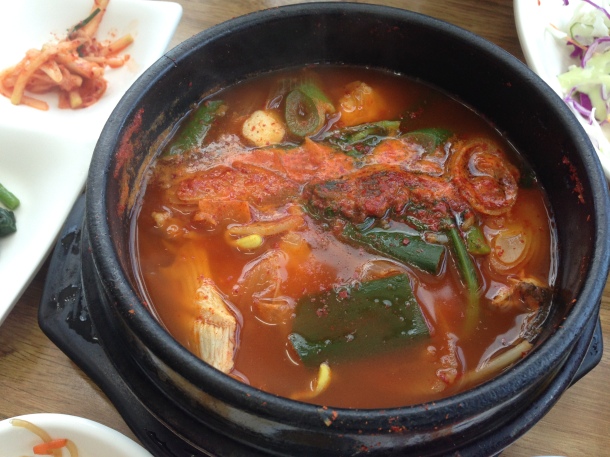 It warmed my mouth and my stomach in the best way possible, and the broth was thankfully not too salty.

Dinner was at a small, unassuming place off the main avenue by our apartment.  They’re famous for the soju promotion where if each person in the group drinks a bottle, you only have to pay 500 Won or roughly 50 cents for the drinks.  Now, I don’t care too much for soju since it’s like a weak version of vodka with a sweet aftertaste, but I wouldn’t mind getting lots of drinks at dinner for less than a dollar.  As for the food, I ordered kamjatang (pork spine soup) and possam (sliced, boiled pork).  This was definitely more my kind of meal since I prefer all other types of meats over fish, and I was not disappointed.  The liquor was flowing and food was going fast. The soup consisted of a similar spicy stock to the maeuntang, but there were different vegetables waiting to be enjoyed like spinach and hot red peppers. 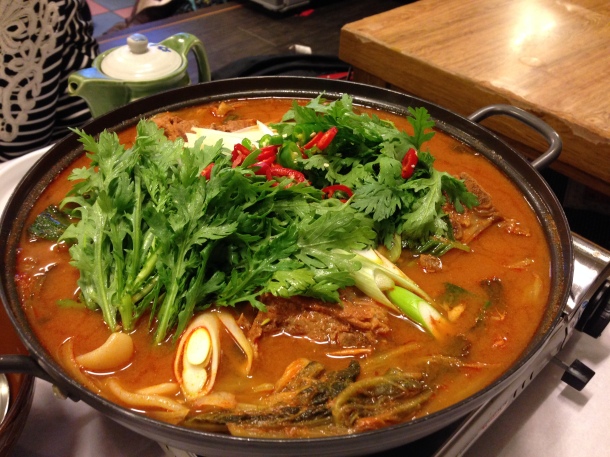 I felt like the luckiest guy when I got the biggest bone with the most pork on it. 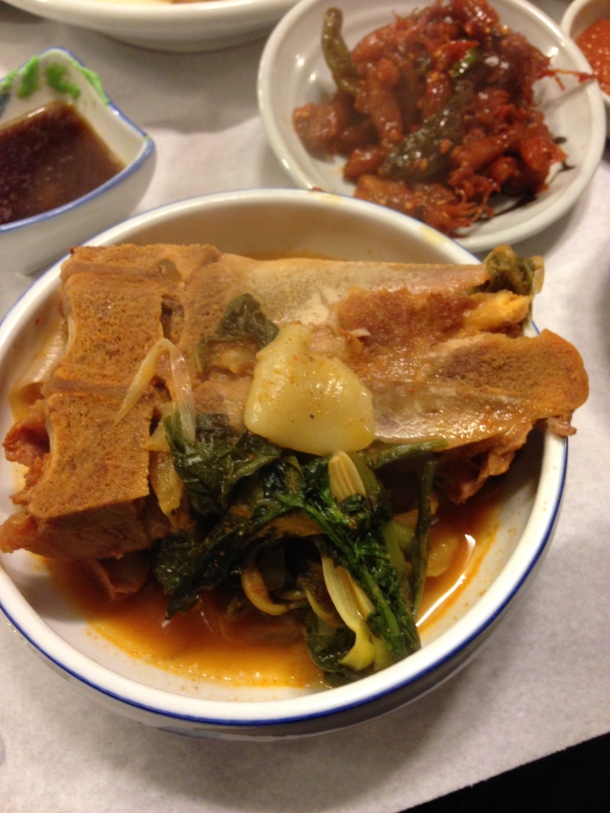 I had a bone to pick with this meal.

The meat was succulent and spicy, but it was semi-difficult to get the meat off the bone sans knife.  As for the possam, it was a superb side to the soup since the pork pieces were firm and succulent with a perfect meat to fat ratio. 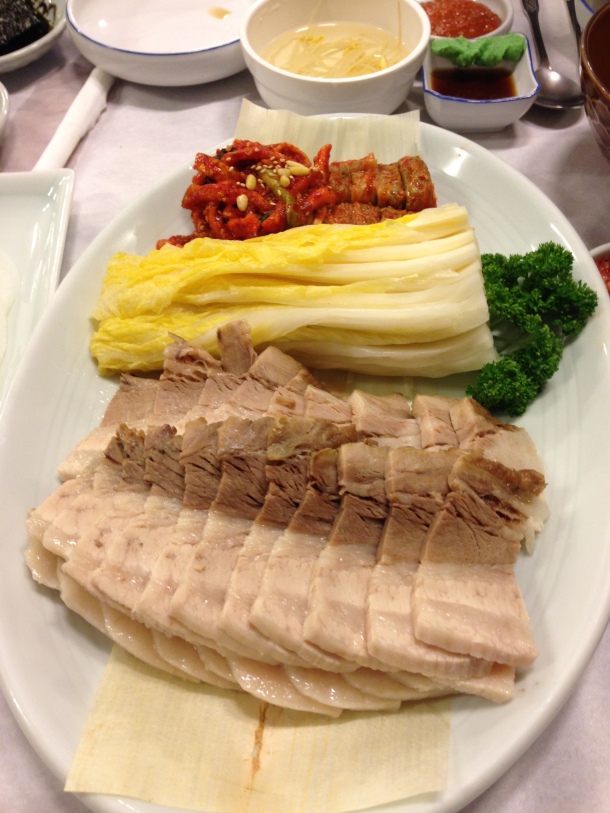 The side vegetables were steamed or slathered in chili sauce and were average in taste, but I took all of it and put it in a lettuce leaf to make a mini-package to deliver the food from the plate to my mouth.  It was a similar experience to my ssambap dinner.   Overall, I would highly recommend trying kamjatang and possam if you have the chance and want a hearty meal that is healthy as well.