Hello to everyone out there to another edition of Mastication Monologues! This is part one of two for my Easter weekend in Incheon/Seoul. This past week has been way too crazy for its own good at school with losing one of my coteachers to sickness, so I was intent on making the most of this weekend to put my worries behind me.

So after a semi-wild night on Friday in Bupyeong, I was planning on meeting up with some friends at this barbecue festival in Seoul, but due to some detours they took, somehow they were over an hour late. I got tired of waiting in the cold and semi-drizzling outdoors, so I went downstairs at Magpie Brewery to get my southern style barbecue to find a line that was all the way out the door and not moving. I waited for probably ten minutes and called it quits.

Never meant to be

I’ve had my fair share of barbecue, and I’m pretty sure this wasn’t going to be like the real thing I’ve had while in the Dirty South. Instead, I made my down to a restaurant right around the corner that I saw on the walk over to the brewery: The Poutine Factory. Now, I remember during my childhood we took a trip to New York/Canada, and we stopped in Canada at a McDonalds for a bathroom break. Naturally, I wanted to see if they had anything different on the menu, and I saw that they had something that looked like fries piled high with cheese curds and gravy with the word “Poutine” next to it. I didn’t really know what it was back then, but that image always stuck with me. So this place, Poutine Factory, seemed to be a perfect place to finally try that mysterious Canadian food I saw many years ago.

It wasn’t the cheapest meal I’ve had here, 12,000 won, but I went with the KB fries with a side of chili sauce. The decor of the place was not too kitschy with little Canadian souvenirs everywhere along with different books in a little bookshelf with different facts about Canada. I saw the guy also freshly frying the fries in the back, so I was expecting a great meal. They were all finished, and I was salivating just looking at the Poutine from afar. Then the chef tripped and spilled it on the floor…luckily I got a discount because of it. He whipped up a brand new order, and I was face to face with my Korean Poutine. 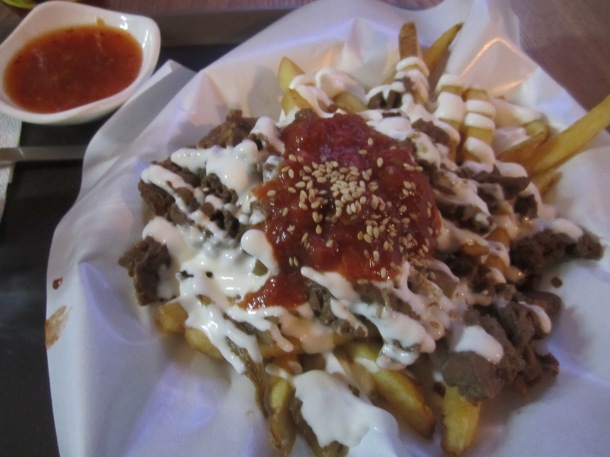 It was a mini mountain of freshly fried fries topped with kimchi, marinated bulgogi, chili sauce, sesame seeds, and sour cream. Plus, I had a side of sweet chili sauce and a bottle of Sriracha just to keep things interesting (as if they weren’t already). To start, the fries were perfect with a golden-brown hue and a fluffy white interior. Plus, they were not greasy or over salted. The bulgogi was really good with the gochujang chili sauce and sesame seeds. There was a good amount piled on the fries, and the meat was very tender. The only downside to this dish was the kimchi. Now, I’m not a kimchi expert/Korean, but this kimchi was very bland even though it had been mixed in with the gochujang. I thought that the sour cream drizzle brought more to the table as a cooling element to the savory/spicy elements of the meal than the limp contribution of the fermented cabbage.

Overall, Poutine Factory is a bit pricier than a normal Korean restaurant, but you get a substantial portion of very hearty food. It was a tasty tribute to the spirit of the Quebecois. Bon Appetit!