Take A Look At These Patatas (Cafe de Sevilla)

Hola a todos! Welcome to another addition of Mastication Monologues, and I hope you are ready for an international recommendation. This past Spring Break, I wanted to go on vacation somewhere overseas. So I ended up planning a trip to southwestern Spain with my home base in Sevilla. I had previously travelled to Andalucia when I was living in Barcelona, but this region called me back with its charm and all things people normally associate with Spain, i.e. flamenco, bull fighting, and soccer. It was definitely different culturally and linguistically from Catalunya. Today, I would like to talk about my experience at Cafe de Sevilla located on the corner of Paseo de Catalina de Ribera right next to the Jardines de Murillo (Murillo Gardens).

As I was exploring the city’s many different tourist stops like the Catedral de Sevilla and the Plaza de Toros, I was also on a hunt for my favorite tapa: patatas bravas. If you’ve never had them, they are kind of like the Spanish version of French fries. They are diced and fried potatoes that are served often times with a mayonnaise-based sauce with some type of tomato element and black pepper. However, here stateside I have yet to find a tapas restaurant able to recreate this seemingly simple dish. I don’t know if they are trying to make it fancier for American diners, but I have seen some interesting variations. Anyway, while I visited many different restaurants and cafes in Sevilla, I found that it was nearly impossible to find my patatas bravas on the menu when in Barcelona they were quite popular. This all changed on a walk back to my hostel when I decided to go to a restaurant right by the Murillo Gardens. 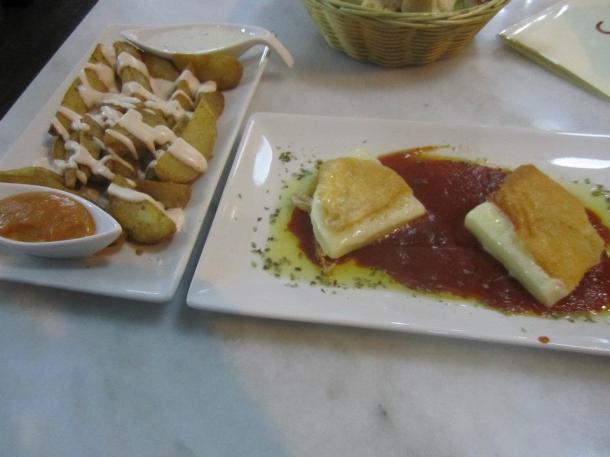 It has both al fresco and indoor dining. For my last meal in Sevilla, I dined outside on the patio, and it has a classy ambiance with their wooden tables and canvas umbrellas. It was a perfect night for a refreshing Cruzcampo (Sevillanos are more known for their beer than wine consumption strangely enough), a plate of patatas bravas, and bull tail. I even had a funny interaction with the waitress because apparently I used the Spanish word for tail, “rabo”, that only old people in the country use instead of the more modern “cola”. Once I established myself as being an old country bumpkin, I was excited for my last Sevillian meal.

The patatas and the bull tail came out at the same time with the bravas having a much more exquisite presentation than the no-nonsense approach to the bull tail. The potatoes were perfectly fried with a slightly crunchy outside and soft, white interiors. They were drizzled with the classic, only-in-Spain patata sauce which was a bit spicier than the other varieties I have tried in other cities in Spain. However, these were special since they also came with blue cheese sauce that was not too overwhelming with the cheese chunks floating in it, and a spicy tomato sauce that may have had saffron in it as well. As for the bull tail, it did not look like they just took a tail from a freshly killed bull in the plaza de toros and slapped it on a plate, but rather there were three moderately-sized hunks of meat served in a beef based gravy along with a side of potato wedges. 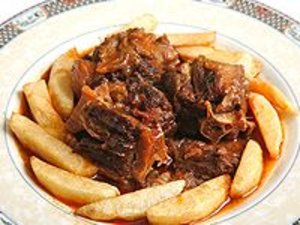 Un”bull”ievable (I just went there)

The meat itself was very tender, almost like brisket, and I didn’t even need a knife to cut any of it off the bones. As for the gravy, it went very well with the meat since it seemed to have some spicy undertones to prevent this dish from being mediocre. As for the potato wedges, they were thrown in with the gravy which I didn’t really care for since they ended up just disintegrating into the rest of the meal. Nevertheless, it was quite filling, and I was thoroughly satisfied with my meal.

So the next time you are in Sevilla and want to try the best of something traditional or be a little more adventurous, the Cafe de Sevilla has a dish for everyone’s’ personal preferences. However, this city has many great establishments to dine at in its tiny, winding streets, so follow the advice of a popular Spanish saying, “El perro que anda, hueso encuentra” (The dog that walks, finds the bone). This is only part one of two on places to go to eat in Sevilla. Part two involves gelato, so get excited!