Welcome one and all to part deux of Restaurant Week on Mastication Monologues!  If you’re not sure what Restaurant Week is in Chicago, then I highly recommend reading my first post at Hub 51.  Today’s post is somewhat in the similar but even classier vein of high end dining for low low prices.  While I’m all about trying new and exotic foods, my meal at Capital Grille in Chicago was classic steakhouse dining at its finest.  While it’s not one of the old stalwarts of steak in the home of the dearly departed Union stockyards, I really enjoyed my experience at this establishment.

While walking to Capital Grille, I saw that they had valet parking which is a great deal in a part of down that isn’t known for cheap/free parking.  The outside was just a hint of the regal interior inside that had all the pomp of a classic steakhouse down to the dark wood bar and portraits of random white guys sporting some facial hair that would make any modern day hipster proud. 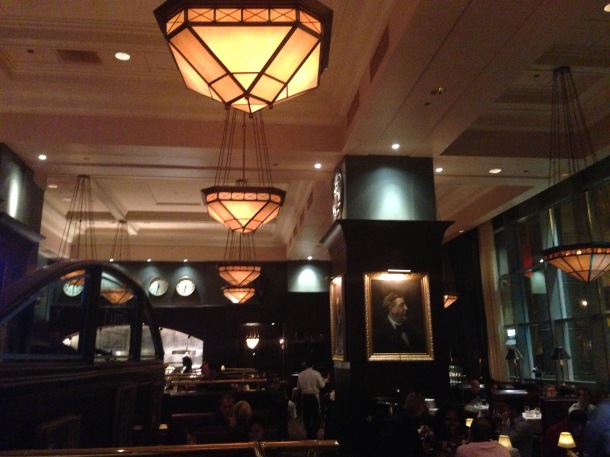 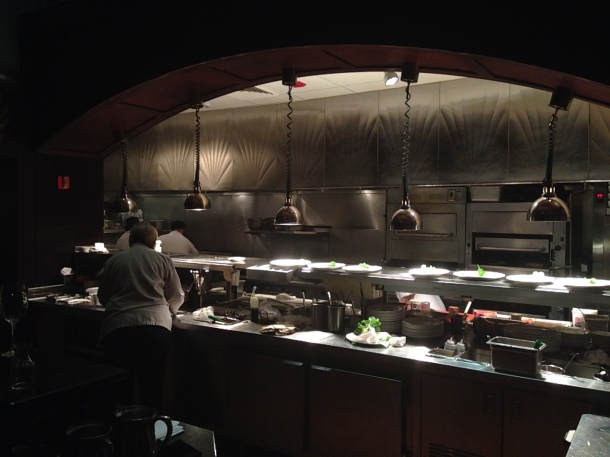 Capital Grille even has personal wine kiosks for clients who are willing to pony up the cash for their pinot noir, but the coolest thing I thought was that they even had a cabinet for wine for what seemed to be for anyone who is or has served in the armed forces.

I was quickly led to the table for our guys night out that quickly became a double date plus two dudes.  Still, it was a good time had for all as we kicked off the dinner with some drinks.  I got a glass of the Jameson 12 year Reserve. 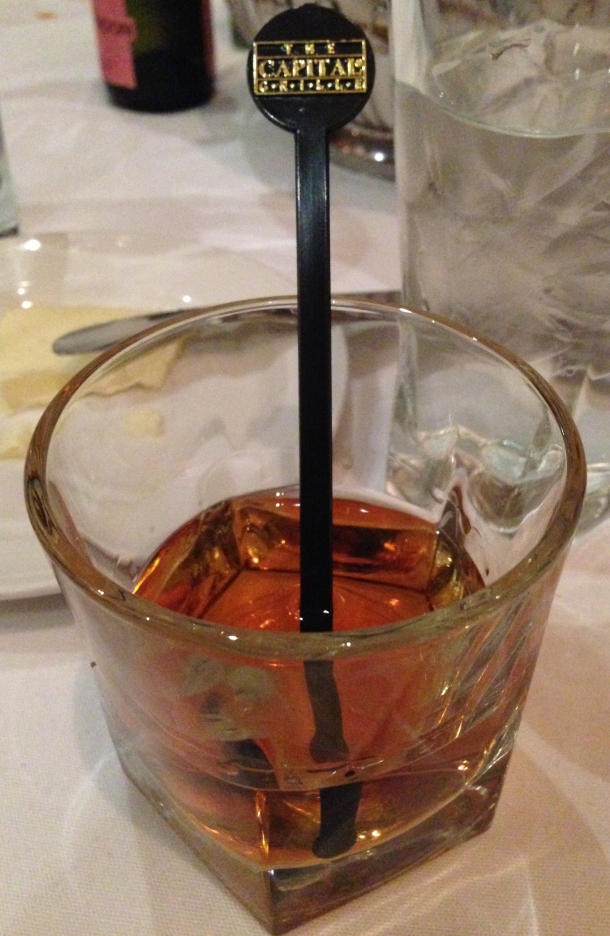 This drink was smoother than James Bond and Ron Burgundy in a velvet room.  It was the perfect compliment to the free bread basket that was filled to the brim with crisp flatbreads, warm slices of black rye bread, and rock hard rolls (not a fan, personally).

So, since it was Restaurant Week, I went with the accompanying $33 menu which was a bargain for a three course meal.  For my first course, I went with the wedge with blue cheese and applewood smoked bacon.  Initially, I had to ask the waitress what a “wedge” was since I was curious what this wedge consisted of, and she sarcastically answered that it was a type of salad.  When it came out, it all made sense.  Looking at it, it seemed like the laziest salad ever created. 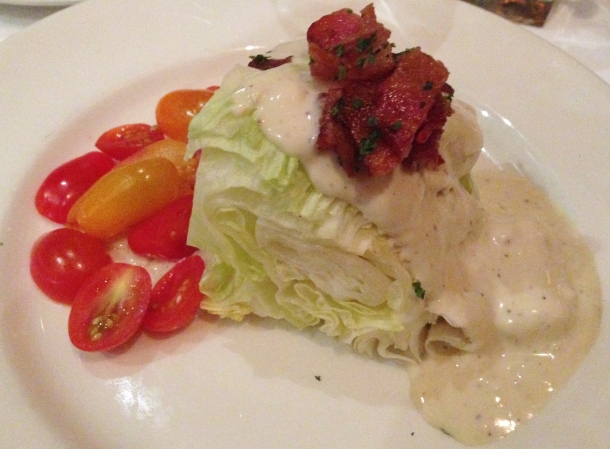 It literally was a quarter of a head of lettuce with dressing and bacon pieces adorning it and sliced tomatoes placed at the foot of this odd looking dish.  So, I proceeded to sliced the lettuce piece to bite-sized pieces along with mixing it up with the extremely decadent ranch, blue cheese chunks, and bacon.  It was the Paula Dean of salads given how fattening it was yet oh so tasty with the tangy dressing mixing with the salty bacon and pungent blue cheese.  It was only a prelude to the epic entree that came out soon thereafter in the form of the 14 oz. bone-in, dry aged sirloin steak along with a side of mashed potatoes and french beans with heirloom tomatoes.

Funnily enough, the girls at the table got the smaller, 8 oz. filet mignon, but that didn’t take away from its quality. 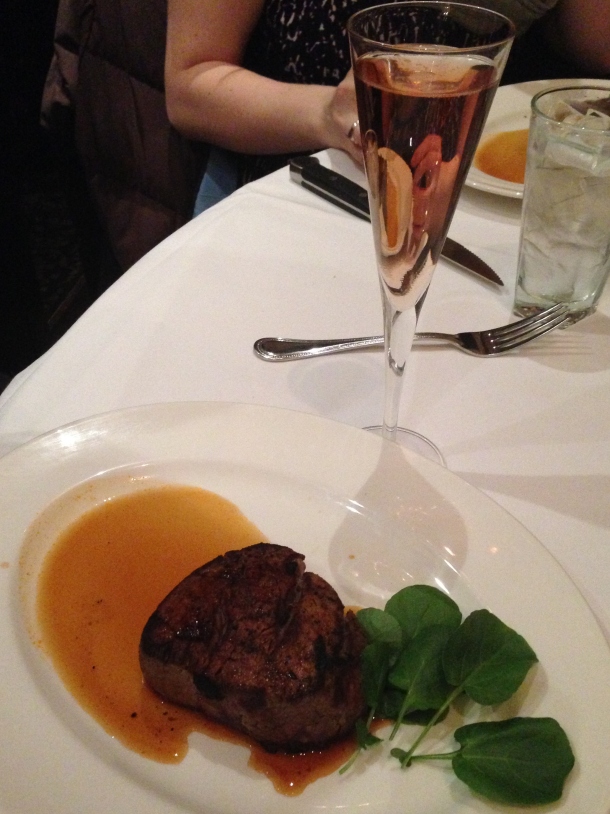 When I dug into the sirloin, it was heaven in meat form.  I got it medium rare which meant that it still was a bit bloody but well done enough to keep in all of the juicy flavors.

It was superbly succulent, and a generously sized piece of steak for the price.  The sides were equally exquisite.  The mashed potatoes were creamy and buttery, and the beans were neither too firm nor too soft.

Then there were the desserts…lord, the desserts.  First, I got the flourless chocolate espresso cake.

It was like a slice of fudge that wasn’t as sugary and not as crumb based as a typical slice of cake.  This texture combined with the intense dark chocolate flavor with coffee hints in each forkful made it hard to beat, and the raspberry sauce was the icing on a cake without equal.  My other dining companions tried the creme brulee which looked lip-smacking good, but sadly I didn’t get to try it.

However, based on their gleaming white bowls at the end of the dessert course, I could only assume they liked it!

So if you want to try a slice of Chicago’s steak culture in the heart of the city, check out Capital Grille.