Hello to everyone out there again in the blogosphere to another installment of Mastication Monologues! I will attempt to keep this post short and sweet since I am fighting off the effects of a food coma from a delicious grad school graduation dinner. I ended up going to Wildfire located at 232 Oakbrook Center Oak Brook, IL 60523.

Wildfire is a Lettuce Entertain You establishment and has created a reputation as one of Chicago’s/Chicagoland’s premier American eateries. When walking into this restaurant, it has the ambiance of a bygone era where you would expect to see the Rat Pack at the bar and the maitre d’ to offer the female patrons a cigarette to calm their nerves and keep a slim figure (For those non-smokers, thankfully the smooth, bold flavor infused part of that aforementioned bygone era is gone). Anyway, we sat down at a booth that had a perfect view of the dining room, and we were immediately welcomed by our waitress with a complementary plate of breads. One mini-loaf was an airy, buttery poppy-seed and onion concoction that was delectable, and the other, more globular loaf was a dark pumpernickel with both light and dark raisins. Personally, I preferred the onion bread to the pumpernickel, but the latter tasted more like a dessert type of bread due to the presence of fruit and nuts in the bread. Either way you cut it, they both were the best thing since sliced bread. 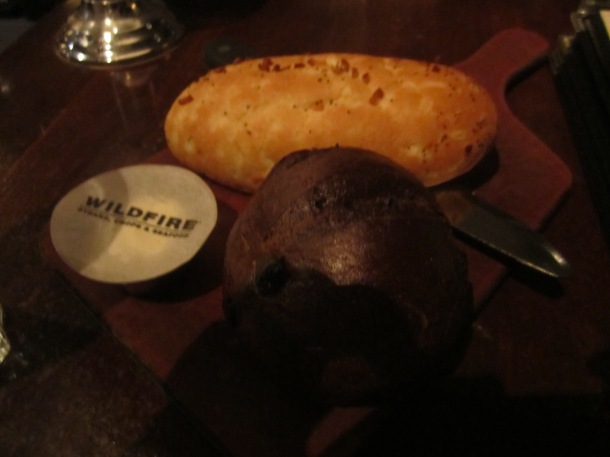 As for my main course, I went with the Eight Hour Barbecue Platter. It was the Dinner Special for Wednesday nights, and I feel like the name comes from the amount of time it should take a normal person to finish all of the food. However, I usually am hungrier than the average bear, so I naturally destroyed my meal in no time.

Now I know that the picture does not do the meal justice since it isn’t the most aesthetically pleasing plate, but it truly was a meal of kings. I started off with the pulled pork (right hand side, in front of the corn muffin) that literally melted in my mouth with a smoky, southern twang aftertaste. After I finished that mini-mound of pork paradise, I moved on to the sliced brisket (left side of plate) which still possessed a similar savory personality but was a bit on the dry side. The baby back ribs were a mere afterthought at this point, but the meat was perfectly seasoned and fell of the bone which made eating them a breeze. I’m not the biggest fan of beans in general, and the beans they served me were no exception to my dislike. They weren’t terrible since they were simmering in the same barbecue sauce they used for the different meats, but they really did not bring anything different to the meal aside from a change in texture. Nevertheless, I was glad that I left the cornbread muffin for last because it was a sweet, bright yellow beacon of fluffy goodness shining through the shadows of the barbecue smoke. For dessert, we ended up getting an apple crumble which made my inhibitions crumble as I proceeded to tear down its caramel coated ice cream dome and combine it with its graham cracker and apple pie filling like some sort of confectionery hungry Godzilla. If you love apple pie or apple/cinnamon anything, I highly recommend this dessert, but remember to save some room for this monster.

So if you’re looking for a classy restaurant for a power lunch, a special dinner, or just a great place to catch up with friends and colleagues, check out Wildfire!