Well, the weeks in October are just flying by.  I can’t believe that October is almost finished, and Halloween is a week away.  My Game of Thrones costume idea has hit a snag, but I’m sure I’ll figure it out in time.  If not, I’m really in for a scare.  However, one eatery that is anything but scary is Rose Angelis in the Lincoln Park neighborhood in Chicago.

Chicago has a mountain of Italian eateries that run the gamut from bare bones like Bombacigno’s to high end dining like at RPM, so choosing one is an easy task.  However, finding one with high quality food at low low prices is often times a difficult task.  Enter the aforementioned Rose Angelis.  I had never heard of this place before I was being whisked away to it with my girlfriend for her bday din din with her girlfriends.  The outside was simple yet elegant, and the inside was just the same.  As we walked through the establishment, it was furnished with paintings of Italian landscapes and small white lights.  The Christmas light motif was continued outside on the patio which set the scene for the perfect date night if you’re looking to do one next year (let’s be real, there’s nothing romantic about eating outside in the middle of a Chicago winter).  They were strewn overhead from one end to the other as we took in the atmosphere and the menu.  After ordering a bottle of rose and chianti, we got an order of antipasti in the form of the melanzane miniature alla parmigiana ($7.95) and the caprese roll. 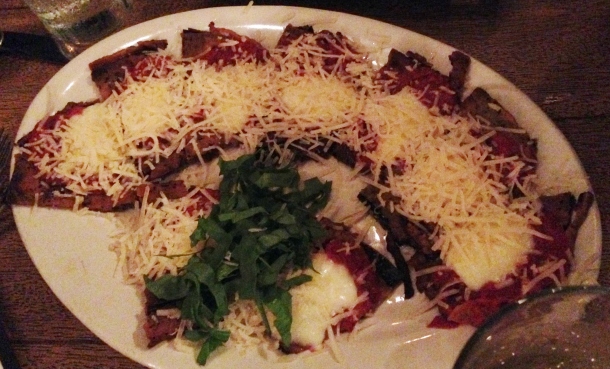 The former translated to inglese is just eggplant Parmigiana or bascially baked slices of eggplant topped with marinara sauce and fresh mozzarella cheese.  While there was plenty to go around, I personally wasn’t wowed by this dish.  It was mostly well done aside from the eggplant which I thought was kind of on the mushy side instead of being firm yet tender.

I was more of a fan of the caprese roll since it combined fresh and slightly chewy buffalo mozzarella that then contained molto thin pieces of salty prosciutto and topped with basil leaves and a tart vinaigrette.  Then for my entree I ordered the pollo Florentino (chicken Florentine) ($19.95).  This dish was the embodiment of the abbondanza Italian food culture, i.e. lots of food=lots of love. 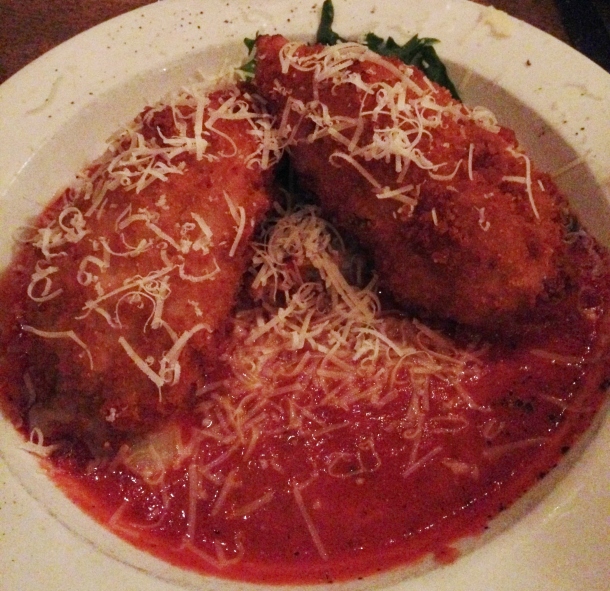 The two hulking panko-coated chicken breasts were napping on a puffy bed of risotto surrounded by semi-spicy marinara sauce.  When I cut into these giant piece of poultry, the provolone and spinach flowed forth like a rich artery-clogging river of deliciousness.

It was quite decadent, and if you aren’t super hungry, don’t expect to finish this meal in one sitting.  You will need a doggie bag…or two.  However, even though it was a giant plate, that doesn’t mean that the quality suffered.  The chicken was high quality and the risotto was delectable when combined with the marinara that had more of a smoky flavor than spicy.  As if that wasn’t enough, since it was my girlfriend’s birthday, they brought out a slice of cheesecake to celebrate.

I had a tiny forkful, but it was molto bene, i.e. just the right amount of creamy and cool cheese with crumbly but firm cinnamon infused crust.

In closing, Rose Angelis is one of those small Italian restaurants you’ve never heard of but with plenty of larger than life flavors and portions for great prices.  I highly recommend Rose Anglelis to anyone who loves Italian food and/or is looking for a romantic dinner date place.