Once, during Prohibition, I was forced to live for days on nothing but food and water.

W. C. Fields
Chicago is truly a world-class city with amazing attractions and a truly intriguing history.  Whether that be the foundation of the city by a black pioneer to the Great Fire to the legacy that is Ditka and Da Bulls/Michael Jordan, but nothing is more iconic than the era of Prohibition.  While New York may have been known as a rough and tumble city up until recently, Chicago has been filled with gangsters, murders, and crooked politicians from day one until now.  They don’t call it Chiraq (Chicago + Iraq) for nothing. 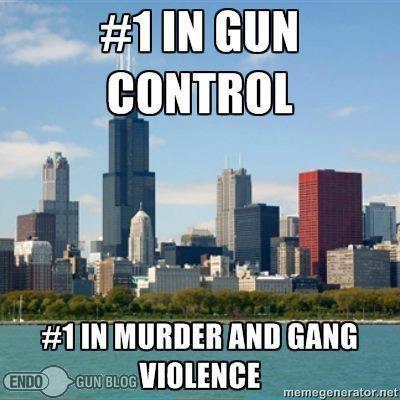 While the small gang block squabbles today have been tearing apart communities on the West and South sides, Al Capone infamously instilled a wave of fear throughout the city utilizing mental and physical intimidation.  It speaks volumes about the man’s influence given that there are still tours highlighting his hangouts, Valentine’s Day Massacre site, and his numerous speakeasies.  One such former speakeasy still exists in Chicago in the form of Twin Anchors.  While the actual building dates back from 1881 and the restaurant from 1932, the food and brews served there are timeless.
The facade of the building is extremely inconspicuous, but surprisingly it was the favorite hangout for Frank Sinatra and even was used in the Dark Knight as a scene with Two Face (you can see the same anchors in the windows). 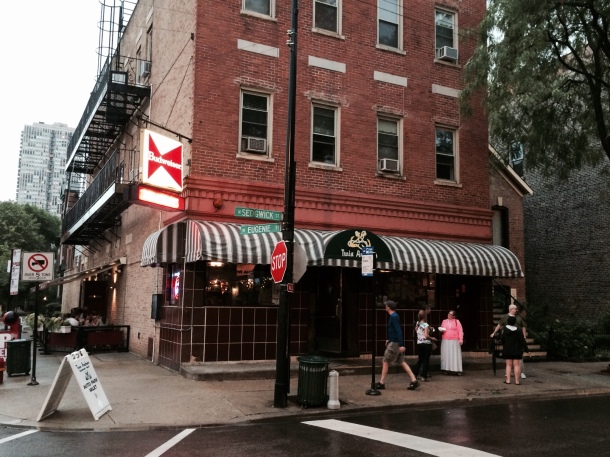 While Janice and I didn’t expect to see Ol’ Blue Eyes or Harvey Dent meting out his unique form of justice during our visit, the bar was hopping just like during the “dry” era of Prohibition.

There was a twenty minute wait, but suddenly we got a table right at the entrance in the dining room after a two minute wait.

It didn’t look like the interior had changed since the 1940s or 1950s, and it really was a no-nonsense sort of place with their “Positively…no dancing!” sign above the entrance. 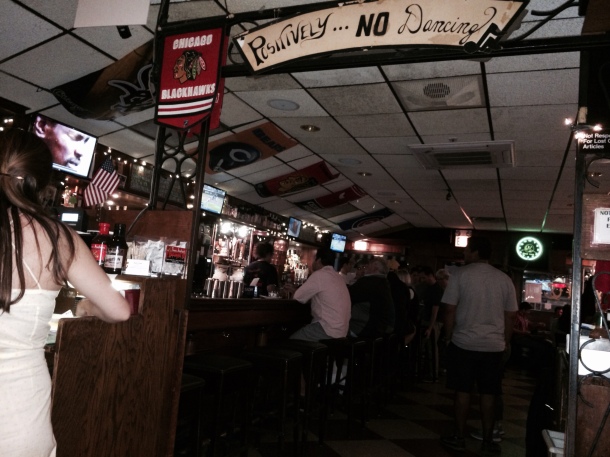 The modern touches were mainly all of the signs from modern tv programs that have interacted with this wonderful eatery including the fitting period series Boardwalk Empire.  While I wasn’t sure what to order since I had never been there, and I was feeling the effects of some day drinking, Janice helped me out.  We split a full rack of their famous ribs ($23 or $16.50 for half) and picked our complimentary sides:  onion rings for me and baked beans for Janice.  To drink, I got an Obsidian Stout.  If you’re not into ribs, they do have other forms of meat like steaks, shrimp, chicken or sandwiches or salads if you’re taking it easy on the old cholesterol.  Before the ribs arrived, we got a basket of crackers, small packages of sesame breadsticks, and big slices of black rye bread with butter on the side.  It was like being at one of the South side family restaurants but on the North side.  I half expected a free cup of soup to come along with the meal, but unfortunately it didn’t happen.  The rye bread was great though since it was fresh, hearty, and earthy with plenty of caraway seeds.  My beer came out first, and it wasn’t anything that grabbed my attention.

It was a solid, chocolate and coffee tinged porter that also had a hoppy bite that proved to be the ideal partner for the culinary experience I was about to undergo.

Eventually the ribs came out, and they didn’t look like anything new or special.

However, Janice informed me that they were slathered in their Prohibition sauce which was to die for.  I asked her if it was because like Prohibition it was spicy and illegal, and my prediction was correct.  Apparently, it is a smoky sauce infused with cracked black pepper, brown sugar, and a hint of the dastardly hot ghost pepper.  I have tangled with the ghost pepper before in a challenge and won, and it didn’t put a damper on this dinner either.  I have to say that these were, sauce-stained hands down, the best ribs I’ve ever eaten.  Not only was there plenty of meat on every rib, but it literally fell off the bone when I gently picked each piece up.  The sauce to meat ratio was ideal since each piece was at least 90 percent coated with a thin layer of the sweet, smoky, and spicy marinade.  I could swim in it though since it was that lip-smacking good.  Lord, there was a minimal amount of fat on these ribs, and my plate looked like the remnants a summer feast at Hannibal Lecter’s house. 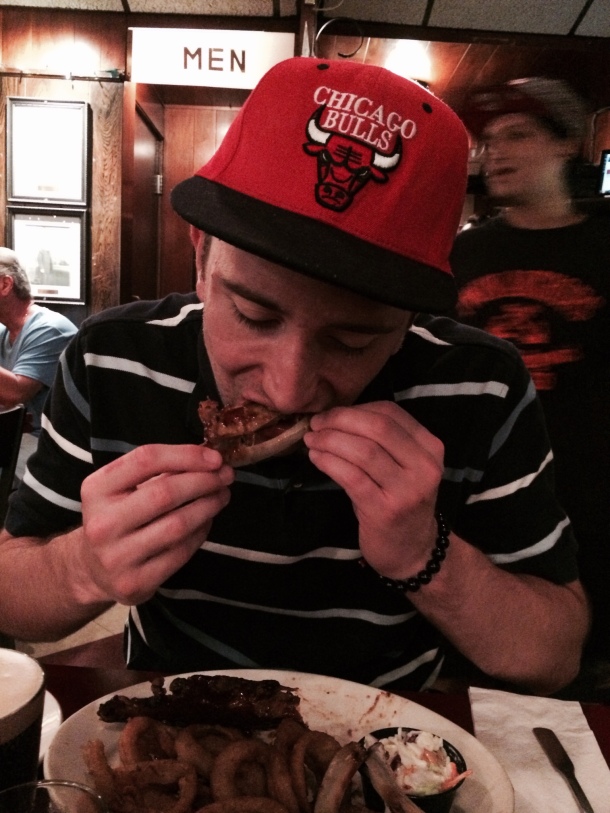 My face and hands looked the part by the time I was done as well.  Janice said she never saw someone eat ribs so fast as well.  The onion rings were scrumptious, but I was simply in awe still from the ribs.  I tried some of Janice’s baked beans too which had pieces of shredded pork in it.

It was a great twist on a classic bbq side.  I could only get one forkful in since I was ready to keel over.  To say I was merely satisfied with the meal, would have done the chef a disservice.

Long story short, if you enjoy history, bars with character, and/or food that is out of this world, sail off to Twin Anchors!