Welcome one and all to Mastication Monologues where I review restaurants and bring you some of my food adventures throughout Chicago and the rest of the world!  This post is the final installation of Chicago Restaurant Week, and sadly it doesn’t live up to other great days that were filled with spicy plates and savory treasures.  Today’s review deals with the brand new eatery Knife and Tine that opened in 2014 in the chic Lincoln Park neighborhood in Chicago.

The outside of the restaurant was modern and clean with flagstone from corner to corner, and the inside was like most modern American gastropubs:  dimly lit and dark accents. 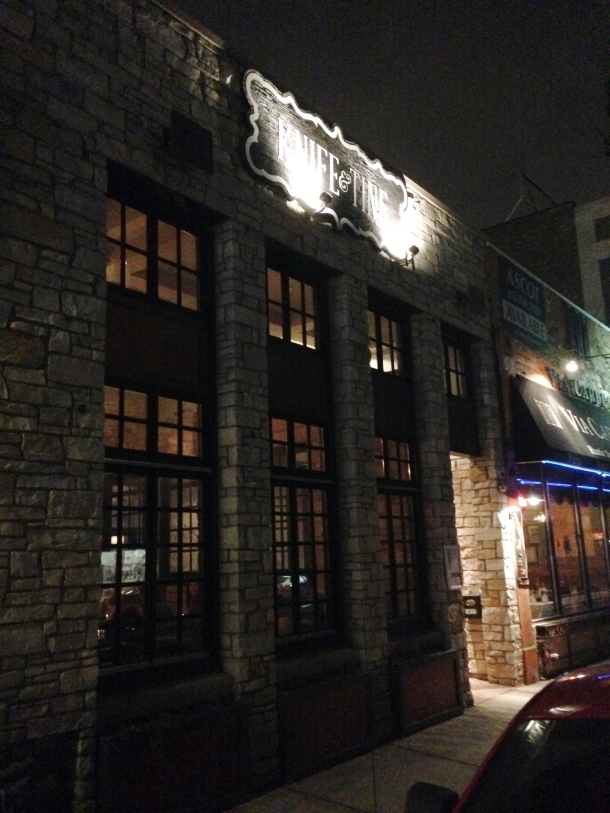 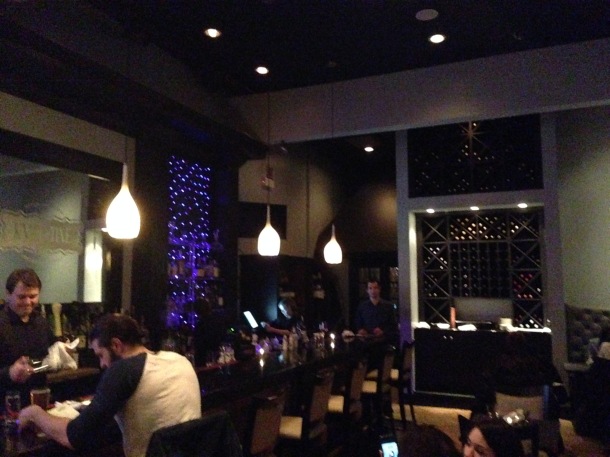 Upon sitting down, we were supplied with our Restaurant Week menus.  It was like most other restaurants that allowed for diners to try a three course meal for the low low price of $33 dollars, but Knife and Tine also had a $44 souped up menu that had more decadent options.  The complimentary bread that started it all off wasn’t decadent.

The pimento cheese spread that came on the side was a bit too salty for my liking, but it was slightly spicy that salvaged my taste buds.  To start, we got an order of the spoon bread and the pear salad.  The former actually didn’t involve any bread, rather fried pieces of whipped cornmeal. 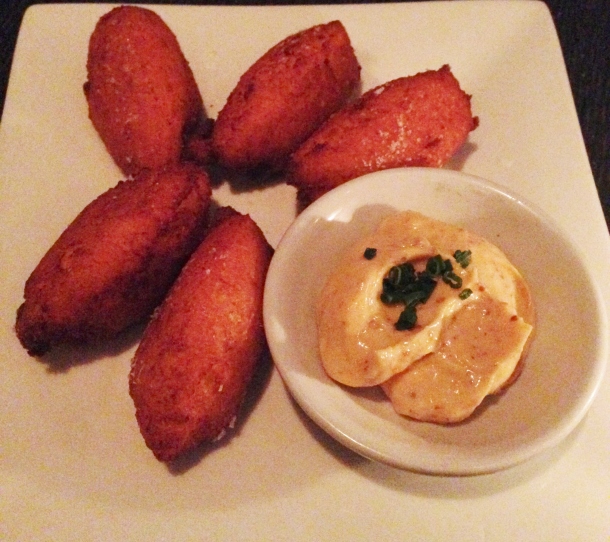 This staple of Southern US cooking left much to be desired on their own.  They were quite bland, and the batter had no character whatsoever. 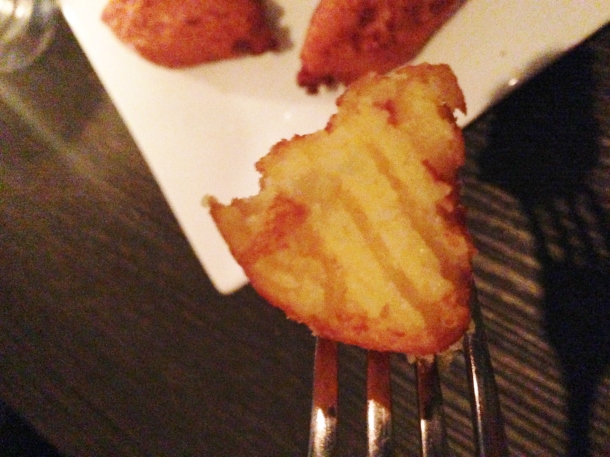 They came with a hot sauce bacon aioli (dipping sauce) that might as well have been called “cream of salt with a dash of bacon”.  On the other hand, the pear salad was light, refreshing, and balanced in terms of the earthy baby arugula, sweet pear slices, and salty Parmesan flakes that were liberally strewn about the salad.

Then there were the arancini which are a Sicilian dish allegedly being invented in the 10th Century A.D. during Arab rule.  As for the name, it comes from the Sicilian word “arancine” meaning orange since these fried rice balls are shaped like their fruit namesakes. 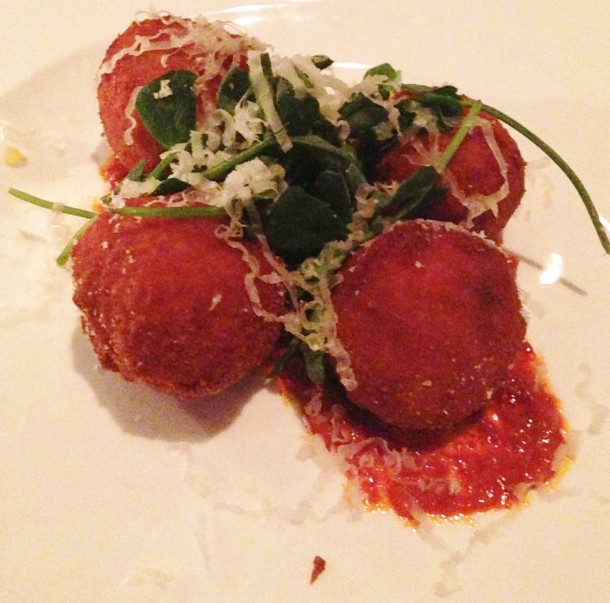 It was fried like the spoon bread, yet a lot more flavorful than the cornmeal stuffed bites.  Unfortunately, it was a matter of quantity over quality in terms of tastes as the pimento cheese and cheddar took over this plate, and even then it was more salty than savory.  As we moved from snacks to the main entrees, I tucked into my chicken and dumplings platter.  It looked ok, and when I had my first bite, it was a let down.

While the crispy skin gave the chicken a satisfying crunch, the meat was greasy, and the ricotta dumplings were bland and semi-soggy soaking up the au-jus.  As for Janice’s beef cheeks, I actually preferred the brussel sprout salad that had a tangy vinaigrette over the over roasted meat. 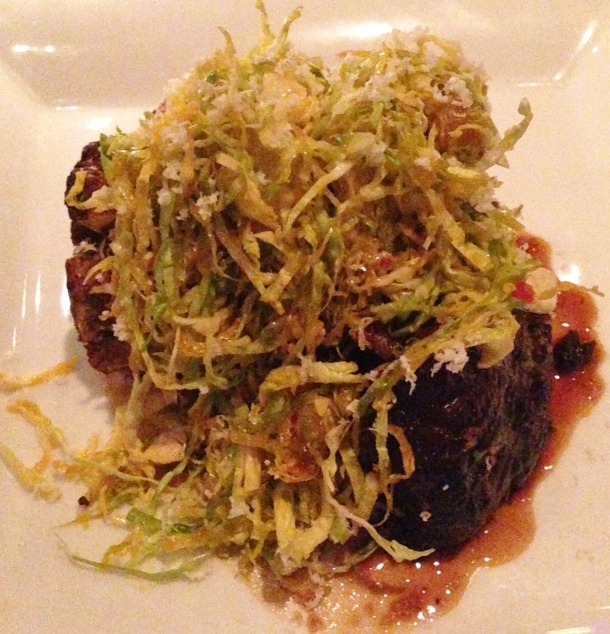 I’m sure if you really like pot roast or other really stewed meats, this would be the dish for you.  It’s not quite my cup of tea.  The bone marrow bread pudding (on the left below) was confusing since I felt like the bread part overshadowed the spreadable goodness that is bone marrow.

It was a case of gilding the beef cheek in this case.  I was extremely impressed with the desserts, and this isn’t just my sweet tooth talking.  The denouement of our dinner took the form of coconut lime panna cotta and a super brownie.  The panna cotta (Italian for “cooked cream”) was coated with a blueberry coulis or thick sauce and topped with sesame tuiles (French for “tiles”) or a wafer of sorts and candied ginger. 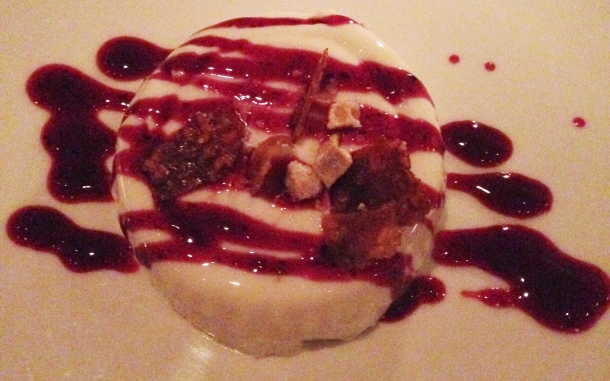 This Italian version of flan was also infused with a bit of coconut and lime juice with gave it an interesting tropical feel.  My favorite part were the toppings like the crispy sesame bits that brought a savory side to a sweet dessert and counteracted the sweeter pieces of ginger.  As for the super brownie, I might as well have slapped an “S” on it and called it, “my hero”!

It consisted of a blondie brownie buried under more brownie bites, whipped cream, chocolate sauce, and candied walnuts.  On top of this avalanche of chocotastic flavors and crunchy walnuts, it was slightly warm that left me in a food coma and drifting off to dreamland.

While many diners have raved about Knife and Tine on Yelp and Urbanspoon, I honestly don’t know if we were eating at the same place.  Based on my experience and Amy Cavanaugh of Time Out Chicago’s, don’t go to Knife and Tine unless you like overpriced and salty food.