Hoo doggy!  It’s heating up in Chicagoland right at the end of summer, and today’s Mastication Monologues post is a real firecracker.  If you’re looking for a fun new bar that has a giant photobooth to document a crazy night or a beer pong table to relive old glory days in college, then check out D.S. Tequila Company!

It is a restaurant that has plenty of attitude in terms of its decor and events that are held every weekend that range from trivia to bingo.  The inside is quite modern in design with mostly metal, exposed brick, and dark wood accents.  However, my favorite part of the restaurant is the patio. 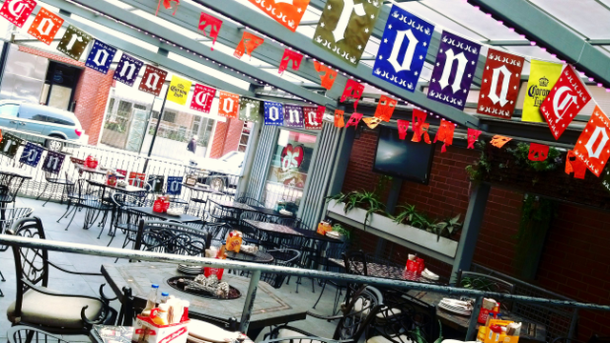 Both times I’ve been there, it was nice weather, so it was packed with partiers and diners.  In this post, I’ll just be talking about my second time there when I went with my girlfriend for lunch.  She had been raving about their nachos there, so I couldn’t say no to a Tex-Mex and personal favorite.  We sat on the patio on the oddly humid/on and off drizzing day around noon.  Due to the precipitation, we got to see their retractable roof on the patio in action, so no worries if it’s raining.  You can still get your groove on outside.  This lunch experience  was the complete opposite of the first time I went there on a rowdy Saturday night.  There were patrons calmly talking over their meals, and we proceeded to do follow suit when the menus were placed in front of us.  We started with ordering drinks.  D.S. Tequila lives up to its name with their own homemade brew ranging from blanco to anejo which you can purchase in the restaurant if you are completamente loco for the Mexican mezcals.  I ended up getting one of their frozen mug drinks ($8 for a glass/$32 a pitcher): the black and green.  It was an intriguing drink since it came out in a large beer mug, but it looked like a root beer slushy.

Turns out that the darker liquid was the Negra Modelo Mexican beer, and the slush was D.S. Tequila’s original margarita.  It was like an inversion of a margarita I had at Gusto Taco in Seoul.  However, I think I preferred this inverted beergarita since the full bodied lager enveloped the sugary slush, but the citrus zest made each sip really pop.  While imbibing this innovative icy beverage, Janice ordered the regular sized Texas Trash Nachos ($9.89).  I was confused why she thought that this would suffice for someone like me with a giant appetite.  I was looking at the other options on the menu like their tacos, burgers, salads, or soups, but she assured me that this would demolish even the biggest of stomachs.  She was totally right.  The nacho equivalent of Mount Doom was placed in front of us with an ominous, heavy clunk on the tabletop.

I didn’t know where to start.

Guess which one of us is intimidated?

Dive headfirst into the ingredient-rich top layer or play it safe with the unadorned chips around the borders of the plate?  I took the bull by the horns, and rode that toro through chunks of succulent steak, chunky guacamole, cool sour cream, two layers of cheese, pickled jalapeno slices, and acidic pico de gallo.   Needless to say, that they all came together in one of the best nacho platters I’ve had.  The only problem, as with most nacho platters, is the refried beans foundation that often times results in soggy chips towards the end of the meal.  That would be my only complaint with the dish, but at that point, I didn’t really care because I was really hungry.  We ended up finished the entire thing, and it was a great bargain for less than five bucks a person.  I’m scared to think how big the “family size” nachos would be.

Overall, I’d recommend D.S. Tequila for a great patio experience or just a rocking good time on a weekend.  Their drinks are strong, and their portions are huge.  What more could you ask for?