Welcome one and all to another edition of Mastication Monologues!  It has been too long since my last post where I celebrated this blog’s five year anniversary in the most food-filled way possible.  Unfortunately, the little issue of being in a very intense graduate program for speech pathology has kept me from being the best blogger I can be, but that doesn’t mean that it has prevented me from sampling great meals across the currently chilly and snow-covered Chicago.  Today’s entry comes from another Andersonville staple establishment in the form of Big Jones. 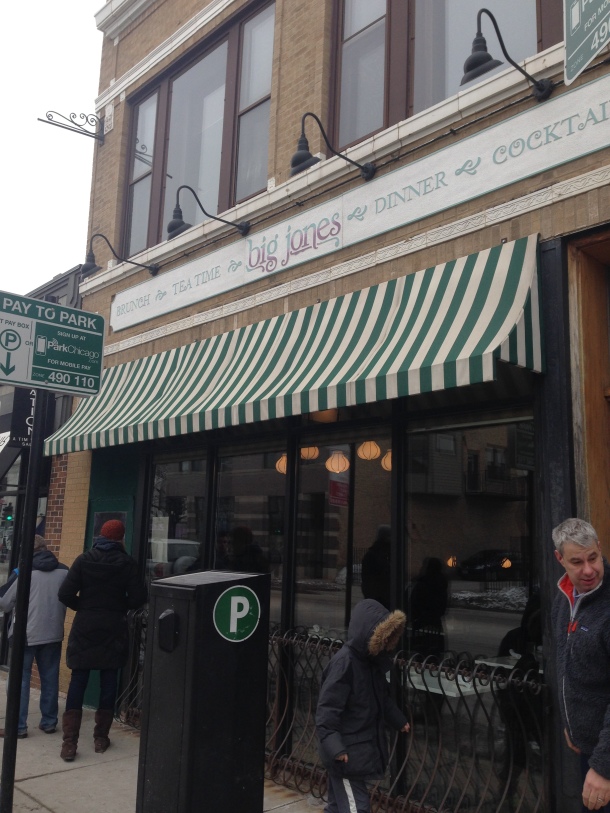 In regard to Andersonville, I am well versed in both their traditional Swedish fare as well as the more colorful installations that reflect the more modern side of the neighborhood.  Janice had always played up the delicious plates the Southern American cuisine eatery offered, but I was skeptical they could truly recreate the funky, soulful, and simple nature of some of the original comfort food from our nation’s early history.  Southern American cuisine has an extremely diverse history based on the various ethnicities that came for a better life  or perhaps had been forced into slavery, contrary to Dr. Carson’s interpretation of that chapter in American history.  African slaves brought their cooking styles from Africa and made the most they could with the ingredients we were given.  This gave rise to such staples of Southern cuisine like collard greens, fried chicken, and barbecue in conjunction with the Native American’s lending some of their smokehouse know-how.  It also helped that the English and Scotch-Irish colonists brought their deep frying skills literally to the fledgling American dinner table.  As time went on and Southern Americans made their way north during the first half of the 20th Century looking for jobs or freedom from segregation, these Southern staples made themselves at home in the culinary fabric of cities north of the Mason-Dixon line, including my town Chicago.  Coming back to our dining experience, Big Jones can be reached either by public transportation or parking on the street.  The restaurant overall had a warm interior with a certain flair that reminded us of our trip to Charleston.

Looking over the menu for a drink, I saw that they stayed true to their Southern roots by having a wide variety of cocktails in addition to the Big Jones Bourbon Society.  Given that I’m not one for drinking early in the morning, I found another southern beverage that caught my fancy:  sweet tea.  Tea has always been a part of America’s history.  Boston Tea Party, anyone?  However, I never knew the history behind this drink.  According to Wikipedia, it was originally an expensive drink due to the then costly ingredients of sugar, ice, and obviously, tea.  What’s even more interesting is that pre-WWII, it was actually made with green tea, but due to anti-Japanese sentiments, the government forbade green tea imports.  Thus, Americans came back to the motherland by drinking English black tea after the war.  Either way, I was loving this refreshing glass to start my brunch off right. 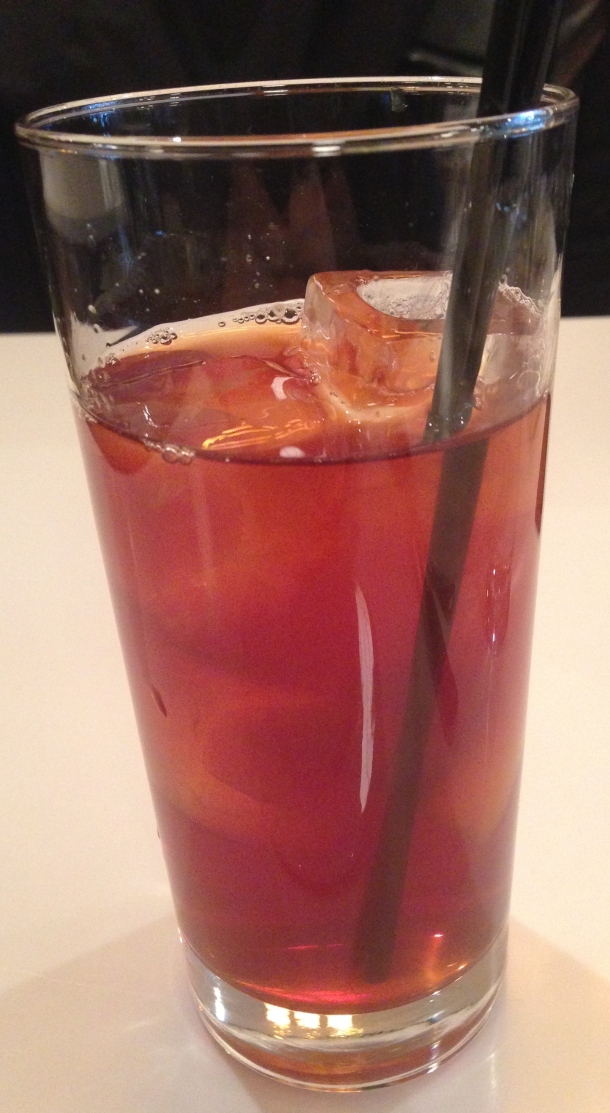 It was especially satisfying after having sweet teas at other establishments (read:  McDonalds) that boast a sweet tea which is actually unsweetened iced tea.  Big Jones does it right with plenty of sugar that indulged my sweet tooth.   Drink in hand, we were ready to sample the best Big Jones had to offer us Yankees.  First, they brought out some complimentary boiled peanuts as well as beignets.  This was definitely a nod to Southern cooking as well as a New Orleans staple.

The beignets were just as fluffy and powdered-covered as the treasures my parents and I destroyed at Cafe du Monde in NOLA.  The word “beignet” literally means “bump” in French, and I’m sure if we had enough of these rich pastries, we’d have a few more bumps than when we walked in.  While we were savoring the fried bread, we decided to split the andouille platter ($6).  Then I ordered the corn griddle cakes ($12), and Janice ordered the caramel apple French toast.  The andouille (pronounced “an-doo-ee”) sausage is a carry over from French immigrants who decided to make it part of Cajun culture.  Big Jones’ sausage is all hand-made on site, and this particular type consisted of pecan-smoked pork in beef casings.  These cold cuts were accompanied by warm rye bread, garlic aioli, and another southern staple, chow-chow 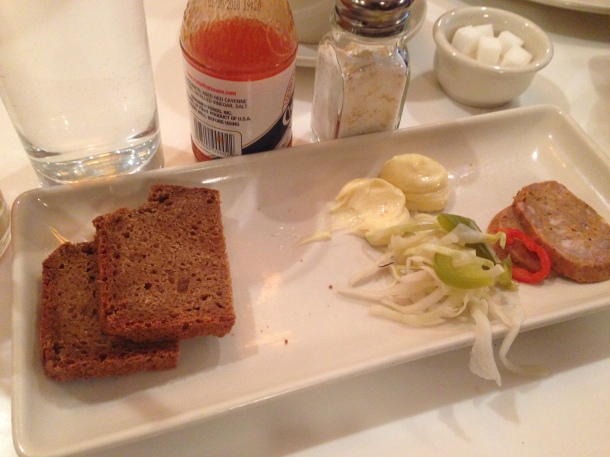 .  This amusingly named condiment/side has a mysterious origin ranging from Acadian immigrants in Louisiana to Chinese rail workers in the 19th Century to even Indian immigrants.  The name is just as obscure with some contesting it comes from the French word for cabbage “chou” while others advocate for the Indian origin story since one of the ingredients, chayote, is known as chow-chow in India.  Wherever it is from, it wasn’t the highlight of the plate since it seemed to just consist of pickled cabbage and peppers.  Other varieties are more diverse including onions, cabbage, red beans, carrots, asparagus, and cauliflower.  The bread, on the other hand, was hearty, flavorful, and the perfect foundation for an open-face andouille sandwich.  The aioli spread had a good amount but not overpowering level of garlic, and then there was the actual sausage.  It was ok but not great.

I think that if it was smoked over a sweeter wood, it would bring a different dimension to the sausage beyond just the spiced pork flavor.  Before we knew it, our plates were being placed before us.  Janice’s place looked picture perfect complete with golden brown bread slices, cinnamon whipped cream, almond slivers, and a heavenly caramel sauce. 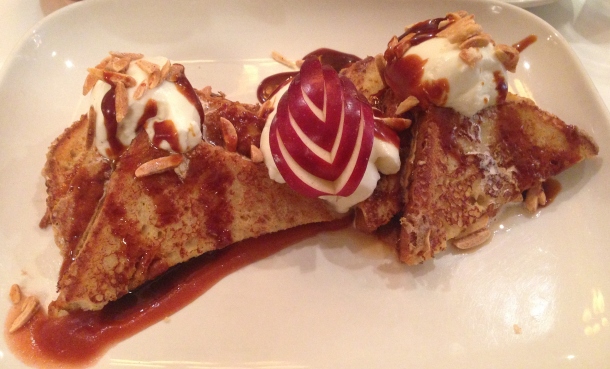 The exquisitely carved apple was the jewel on this crown of a dish.  Unfortunately, it isn’t there all the time due to their rotating seasonal menu, but if it is available, definitely give it a chance.  As for my choice, the corn griddle cakes, it was everything Janice made it out to be.  Their origins reach back to the Algonquin tribes on the East Coast and Cherokee and Choctaw tribes in the Southern USA, and they taught European settlers how to prepare cornbread.  As compared to its more plain Civil War counterpart, the Big Jones version also added Spanish and Mexican flair to it with black beans, salsa, avocado, and sour cream.

These savory pancakes were filling but not too much.  It was the best of both worlds since I love pancakes more than omelets, but the two individual elements combined to make one mouth-watering and appetite-pleasing plate.  I highly recommend them if you’re looking for something beyond shrimp and grits.

Overall, I would highly recommend Big Jones’ for great Cajun food.  It might not be as well known as Heaven on Seven or Pappadeaux, but the line out the door every Sunday would tell you otherwise.  This hidden gem provides generous portions of delectable Cajun fare for reasonable prices, especially if you’re Jonesin’ for just a great glass of sweet tea.  See you next time, y’all!