Hello and happy Fall to all (or Autumn for the international crowd)!  It has been way too long since my last post, about a month to be exact, and I’m planning on changing that fact right now.  If you’ve been wondering why the silence on the foodie front, it’s due to my path to speech pathology grad school.  However, that hasn’t extinguished my passion for tasty morsels and bring all the best recommendations to you, the readers.  Today’s post focuses on the Chicago diner cornerstone Ann Sather.

I’ve heard every opinion of these diners ranging from sheer ecstasy when talking about their famous cinnamon rolls to ambivalence to the opposite end of the spectrum with upturned noses looking for greener brunch pastures.  Instead of turning my interest away from this supposedly inferior diner to other, more modern establishments, it only intensified my curiosity when Janice, Michael, and I visited the Broadway cafe location, but there are other locations on the northside Chicago with one on Belmont and another on Granville.  Now, with a name for a restaurant like Ann Sather, you can safely bet that there is a story.  According to their website, Ann Sather was a real woman who bought the original restaurant over 70 years ago on Belmont from the previous Swedish owners of the property.  She was a stickler for quality, simple food made from scratch with a mix of American breakfast staples, Swedish classics, and a bit of Ann’s ingenuity. Ann eventually passed the baton in the mid 1990s to a southsider named Tom Tunney who actually is a Chicago alderman as well.  Even with the changing faces in charge, their decades of quality food and service shone through during our visit. 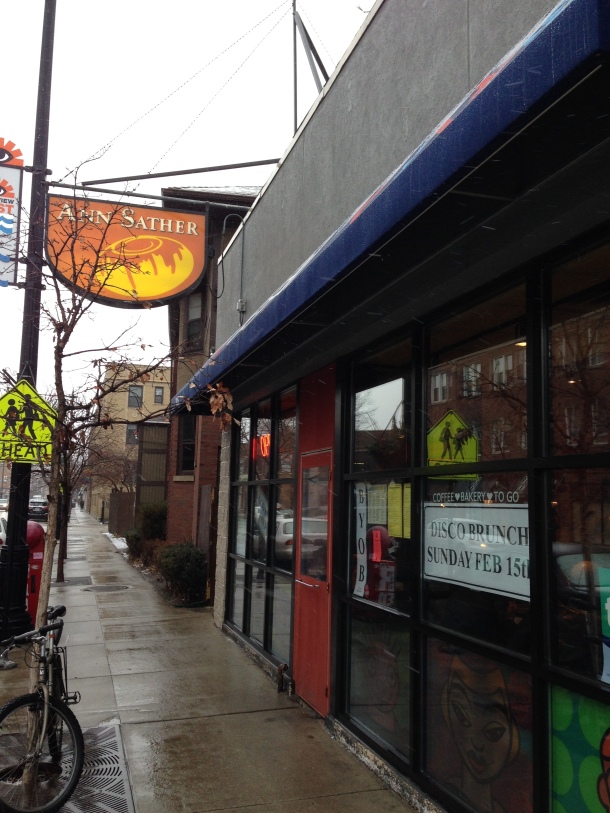 The Ann Sather cafe had plenty of personality on the inside with lots of Swedish inspired artwork which brightened up a rather gray and drizzly day.  I don’t know if it was my sweet tooth on a rampage or the warm orange/yellow motif, but I knew I needed to get some of their famous, daily handmade cinnamon rolls into my belly.

When they came out, they looked like the best $3.50 I spent.  When I sunk my teeth into one of these rolls, I was transported to culinary Valhalla on a boat of soft, cinnamon spiced dough covered in a rich, sugary sauce with a vanilla hint.

I wish I could have had an entire pan of them, but I knew I had to slow my roll (see what I did there) because I needed room for my actual breakfast entree.  Perusing the menu, I didn’t know where to begin.

Their wraps and omelets looked way to good to just pick one, but I couldn’t jump off that sugar train after taking down those cinnamon rolls like a great white shark to a seal.  Sadly, I don’t have a week on the Discovery Channel or the Food Channel devoted to me yet, so I got to keep practicing with more great eats like what I ordered next.  I finally settled on the daily special which was their cinnamon roll French toast ($7.50).  It was an interesting transformation of the dulcet treats I just devoured.  Instead of being doused with the sticky, soupy icing, a sprinkling of powdered sugar covered the plate and rolls like the semi-flurries that were fluttering past our window outside. 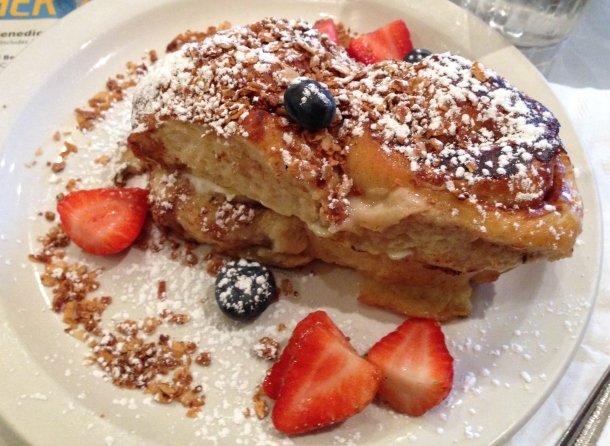 The fine white covering was punctuated with bright raspberries and blueberries and a tan layer of granola that blended into the rolls’ surface.  However, I didn’t know that the magic of the dish lie in wait for me because when I cut open the meal for my first bite, 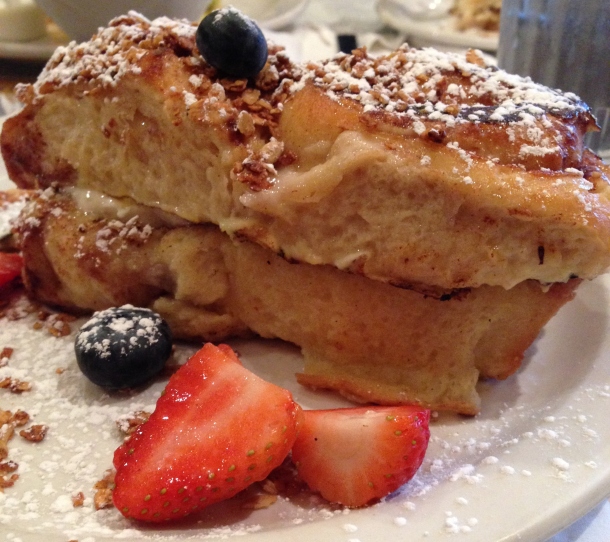 I was greeted with a cream cheese filling.

It wrapped the plate together to perfection.  The French toast transformation of the cinnamon rolls replaced an overwhelming pool of pure sugar with more subtle, nuanced elements that complimented each other to make a Swedish-American original.  The berries, treading the fine line between sweet and tart, provided a contrast to the powdered sugar and sweet, but not overwhelmingly so, cream cheese filling.  I actually liked that the cream cheese centers were not too chunky or heavy but instead whipped to keep the rolls from turning into a culinary quagmire.  Plus, let’s not forget the granola, dude!  It was just enough to form a thin, rough coating to provide a satisfying and groovy crunch to the majority of the squishier ingredients, and the honey coating on each piece of the granola made me feel like these rolls and I were meant to bee.  I highly recommend this daily special if they have it available, and I have to note that my fellow diner’s choices were great as well.

In closing, I have to say that my visit to Ann Sather’s quashed all of the negative publicity with their food that is clearly made with plenty of care and quality ingredients along with a very affordable price tag in a brunch town where some prices are just plain criminal at times.  So, if you want to get a piece of Chicago’s breakfast history, roll on down to Ann Sather!