Yesterday, a blurb came up on my Facebook stalker feed that the annoying people from Eat Your Kimchi (an expat Korea blog) went to a gastronomic ice cream parlor in Hongdae called Fell + Cole that sold really off-the-wall flavors. So I decided to give it a shot since it’s blazing hot out in Korea, and I had a taste for something cold. Here’s the easiest way to get there: 1. Go to Sangsu Station (line 6) and take Exit 1 and just walk straight. 2. Turn right on your first street, it’s not a big main road, it’s just a side street. 3. The street will split left and right but just stick right and you’ll hit Fell + Cole. 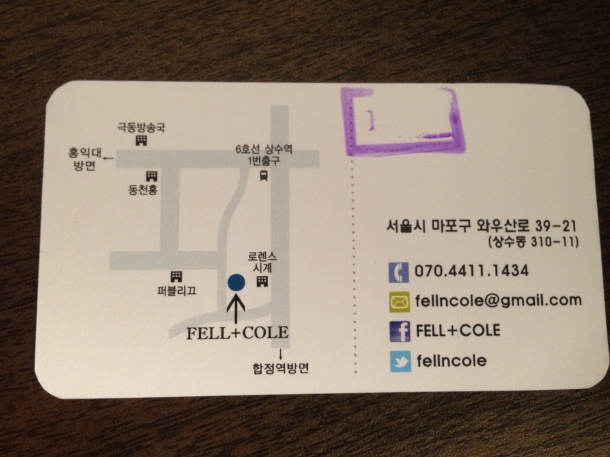 If you’re curious, the name comes from the intersection where the owner lived in San Francisco while studying for his MBA. When I walked in, it was a lot smaller than I anticipated, but it was very well decorated with a laid-back Cali vibe. 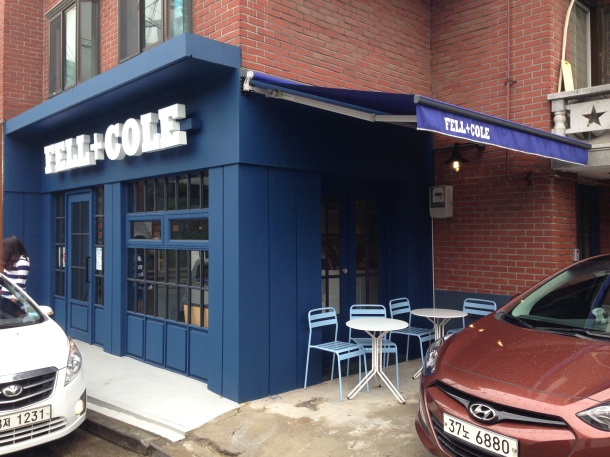 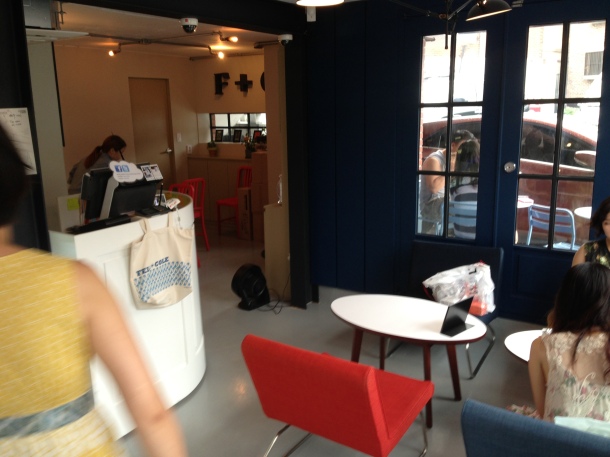 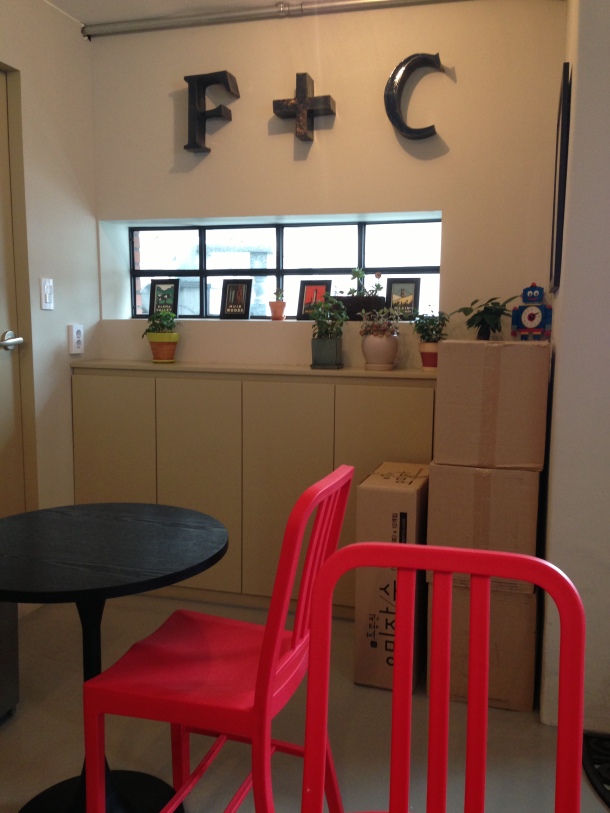 The owner was very friendly and allowed me to sample some of the flavors. I settled for the double cup (8,000) of Makkeoli (rice wine) ice cream and mango hibiscus sorbet. He gave me two pretty decent scoops, and I was definitely blown away by both of the flavors.The mango was on top, and I greatly enjoyed its tropical sweetness that was paired with a slight floral undertone. 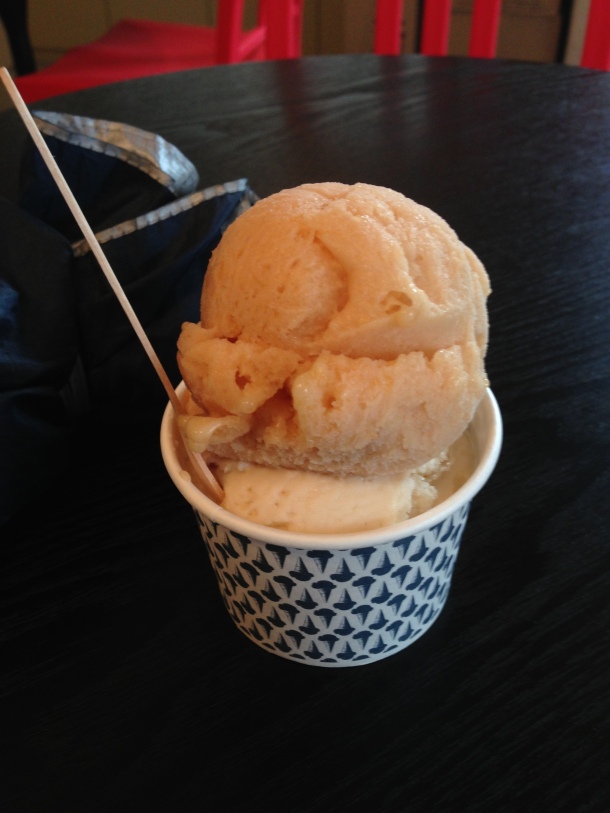 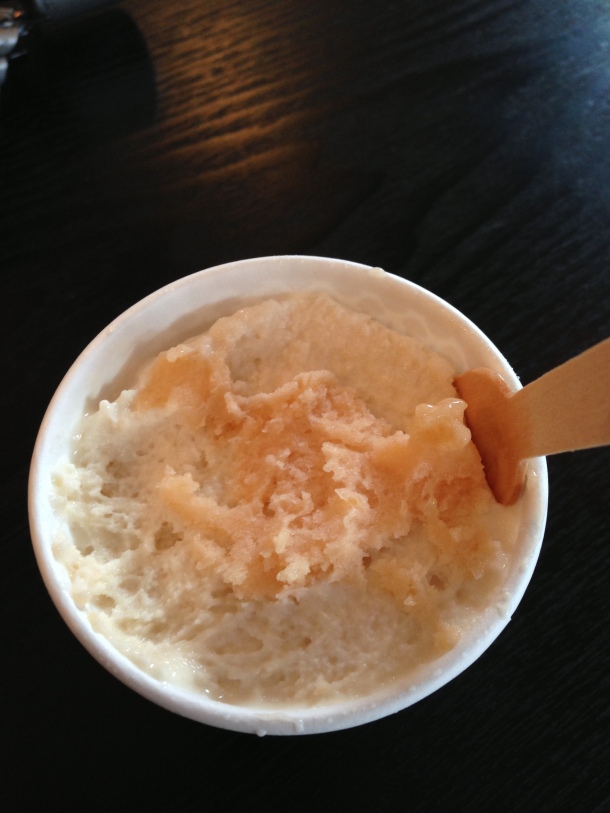 Sadly, they didn’t have their bacon ice cream or their Sichuan pepper cream or their perilla leaf ice cream, but now I have three more excuses to visit this hip and modern boutique of icy delights! I highly recommend this place to anyone looking for a place to beat the Korean heat.

Today they had the type of ice cream that I was expecting from the Cali transplant. I got a double with a scoop of perilla or sesame leaf ( 깻잎) leaf ice cream and then a scoop of All Black which was a mix of Guinness and chocolate. 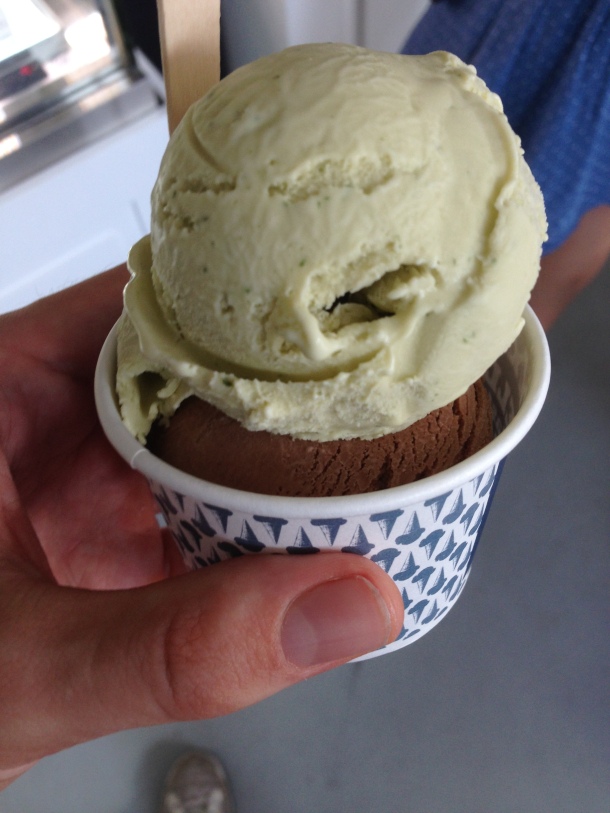 The perilla leaf came first, and I can definitely say I prefer them deep fried instead of in ice cream form. If they’re eaten deep fried or in ssam bap form (raw), they have a strong, almost peppery flavor, but this dairy version made it taste like I was eating frozen sharp cheddar. I do love my cheese, but it is a bit unexpected and almost unwanted when you’re eating it as ice cream. Once I soldiered my way through that pastel green semi-abomination, I once again stumbled on buried treasure. Just like in my last post, Nosh Pit, the alcohol infused ice cream was better not just because it had a bit of alcohol in it. I love Guinness beer to begin with, so I might be biased. Nevertheless, the bold, black coffee cloak of the Irish classic enveloped the milk chocolate which somehow made my tastebuds do a Riverdance of joy. It was like a run-of-the mill chocolate ice cream that had a boosting agent that both complimented and intensified the cocoa element of the creation. If they ever have the All Black flavor, get it and you will thank your Lucky Charms you tried it.

I just want a quick Fell and Cole blurb about two new ice cream flavors I tried:  red wine/Sichuan chili pepper and Love Potion No. 6.  For other flavors, see Nosh Pit and Where Everyone Should Bee. 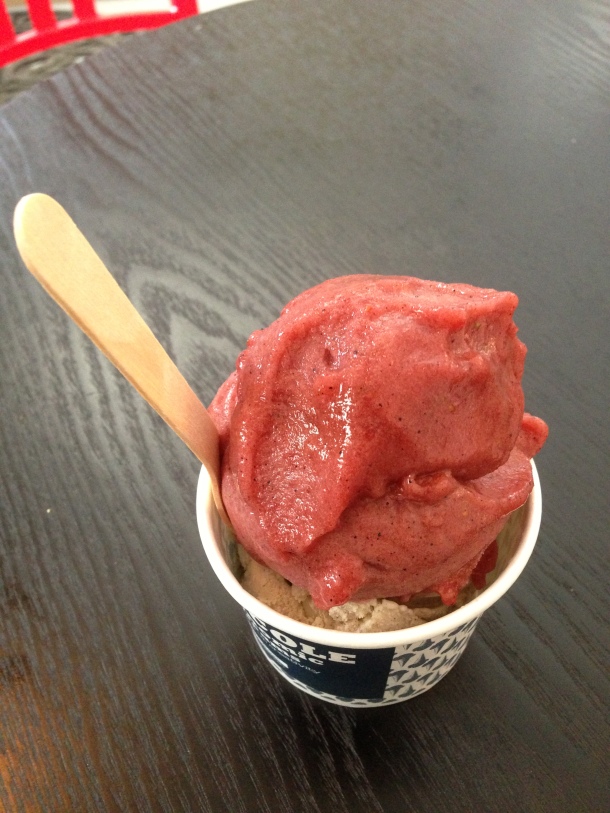 First off, the red wine/Sichuan chili pepper ice cream was very novel yet disappointing in certain aspects.  While it had a strange tartness that persisted after each spoonful, I was crestfallen that it didn’t fulfill its potential to be a really spicy ice cream.  The chili element seemed to have been neutralized and instead used for textural support as I could feel the crunchy chili flakes running over my tongue as I slowly savored the cold wave passing over my palate.  Perhaps the cold neutralized the signature Chinese heat.  As for the second flavor, Love Potion No. 6, it was made of black rice, black beans, black sesame, and kelp. 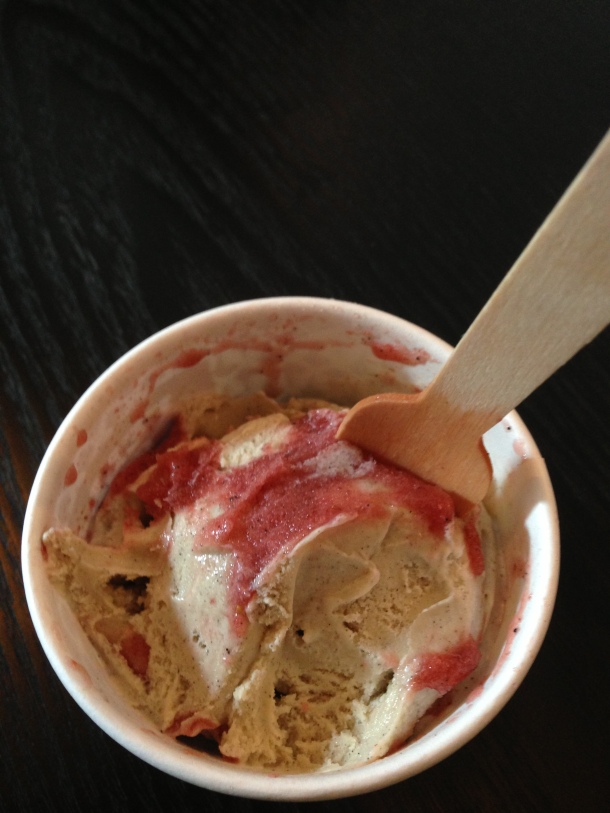 Why all the black stuff you ask?  Well, this ice cream is supposedly referring to a Korean belief that ingesting these foods can roll back the years.  Hence, your grey hairs will turn black again.  I’d personally prefer more hair on my head, but I was genuinely surprised by this flavor.  I was expecting it to taste like garbage, but instead, it had a sugary taste peppered with earthy notes.  I could only liken it to the conservative flavor of a sugar cone, but every so often I could detect the light caress of the salty kelp.  If I had to choose between the two flavors, it would be hard, but I’d go with the Love Potion because its flavor wasn’t as intense as the bold combo of alcohol and crunchy pepper flakes.