Italy is a country known for many cultural exports that range from supercars, beautiful people, political corruption with a real flourish, and a culinary legacy without equal.  From my own backyard to the other side of the world, I have seen variations on some well known Italian specialties like pizza along with some new inventions like the Italian beef sandwich.  A new food superstore called Eataly arrived in Chicago a few years ago and is the figurative baby of famed, Croc-donning chef Mario Batali.  There are currently locations all over the world in Chicago, NYC, Japan, Istanbul, Dubai, and of course, Italy. I had previously spoken with friends and family about their experiences within the establishment, and I heard nothing but rave reviews.  After waiting way too long to finally see what all the hubbub was about, I finally made the trek with my lovely girlfriend, Janice.

It was overwhelming right from the beginning as we walked through the monstrously large glass doors.

Not only that, but Eataly was dedicated to the one and only Ernest Hemingway.  Apparently Papa spent a good amount of time in the Veneto region of Italy which is known for its bountiful food and drink. 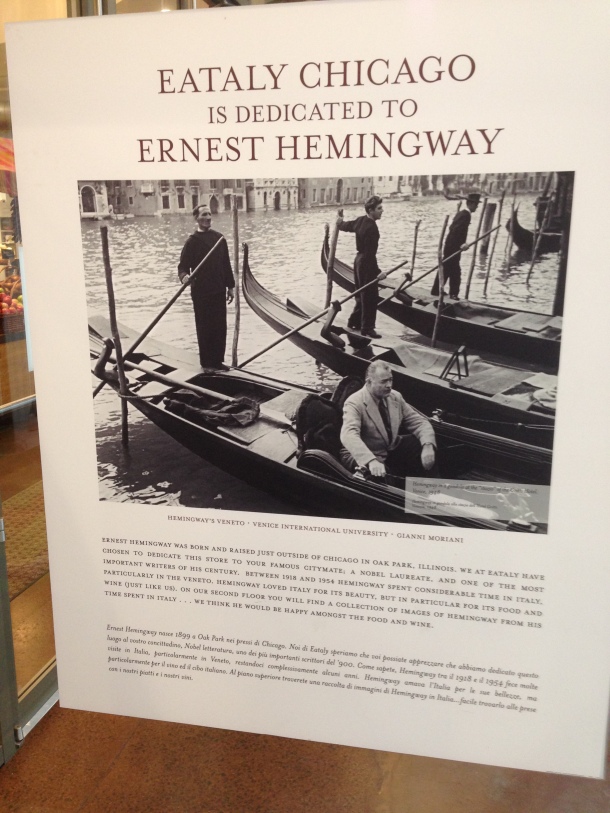 Then again, it made me think of the litany of restaurants and watering holes throughout the world that try to cash in on Hemingway’s legacy. 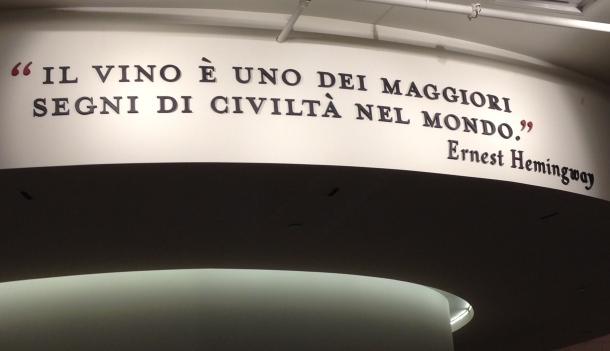 Oh well, I don’t think Eataly was having many problems with business as hordes of people were streaming through the doors and buzzing about the interior as I looked in awe at the cathedral of food that towered before me.  Fresh plums and nectarines lay in front of me as we passed them to the escalator to start on the second floor.  We passed each section that was devoted to a certain part of the Italian culinary landscape like pasta, fish, fried food, bread, cheese, meat and wine.

It looked like all of the produce was kept to the first floor while the second floor was solely devoted to the restaurant portion of the store.  It was like an elite food court where you could go from counter to counter and pay for top notch service and foodstuffs, way too many to enumerate here.

So, I’ll just tell you about what Janice and I tried during our visit.  We settled on the popular pizza and pasta section of the second floor and were immediately seated in front of one of the expansive windows over looking Rush Street.  It was a perfect seat for our date, so hint hint to all you couples out there. 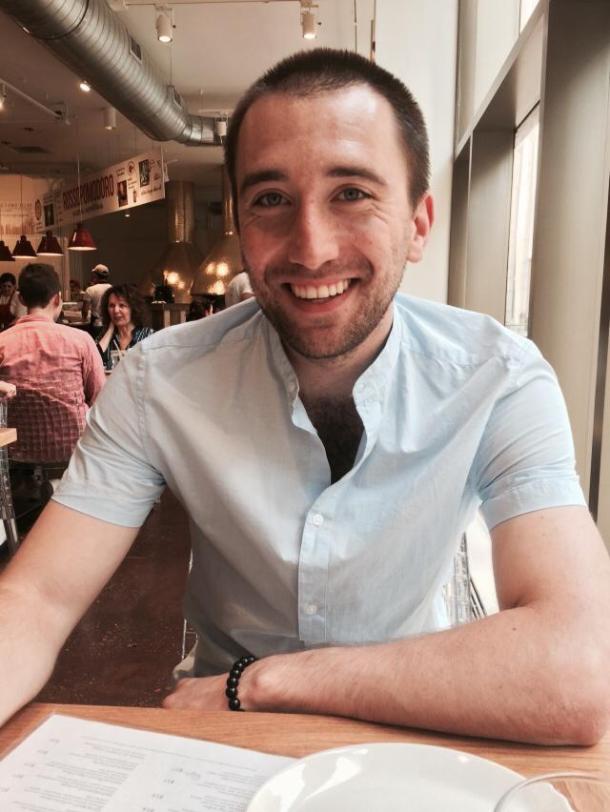 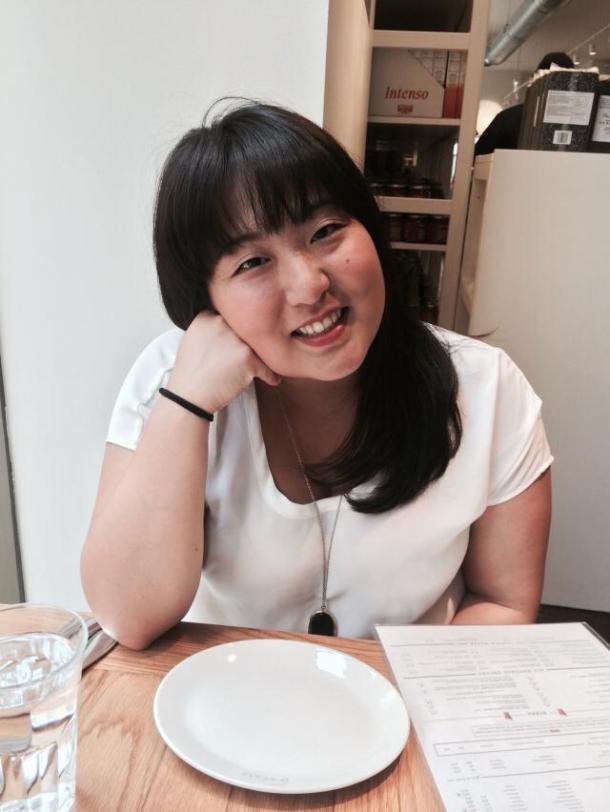 Our waiter was quite helpful in explaining the menu options while supplying us with complimentary pieces of bread and a plate of olive oil.

This definitely wasn’t Papa Joe’s in terms of the pre-meal munchies, but the bread was delicious.  The edges were crusty and crunchy, and the dough was pliable and had a slightly nutty flavor.  The olive oil was quite smooth on the palate.  I wish they brought out some balsamico as well.  After looking over the menu with lots of deliberation, we settled on sharing the Genovese pizza ($18).

According to the website, at Eataly they only utilize Neapolitan pizza making techniques that one can watch before it comes to the table.  We decided to take in the view instead before as our 12″ pie was delivered to our table.

Looking at it, it was more reminiscent of the pizzas I had in Italy or even New York.  Our waiter said that due to the delicate crust, it was recommended that we use knives and forks to consume the mouth-watering looking pieces.  So we naturally obliged, but we still thought you could eat it with your hands if you don’t feel like putting on airs.  Regardless of others perceptions, we tucked into our meal.  The dough was delicate but with plenty of artisanal flour flavor with a slightly buttery hint.

As for the toppings, there was a generous layer of mozzarella cheese across said crust and topped with a mix of the aforementioned olive oil, tidbits of salty and slightly fatty Parma ham, rich and zesty pine nut pesto, bits of aromatic basil, and diced garlic cloves.  All of these elements came together to make one of the best thin crust pizzas I’ve ever tried.  I normally don’t like crusts, but this pizza’s end pieces were light and chewy which I prefer over their crunch counterparts (this also applies to my cookie affinities).

Once we finished that, we moseyed down to the first floor for dessert at, where else?, the Nutella bar. 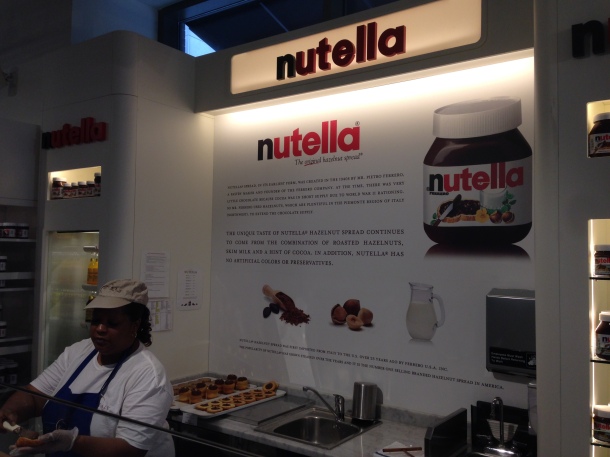 If you don’t know what Nutella is, it’s the choice snack spread of the gods.  While the British have marmite and Australians have vegemite, once again the Italians outcook them with this sweet, molto chocolately, hazelnut-based topping for bread, toast, and other items.  We could have gone for the gelato or candy counter, but the Nutella bar landed us with their large tubs of the dark chocolate nectar and circular griddles for nutella stuffed crepes.

They had a good amount of Nutella inspired items, but I knew what I wanted:  il bacio di dama ($4.80; literally:  the lady’s kiss).  Fitting for my date.  Janice got the saccottino con Nutella ($3.80).  When we got our individual noms, we couldn’t find a spot to sit down since it was so jammed, but luckily a guy who reminded me of Bill Cosby offered to scoot down so we could sit at the communal tables.  My plate consisted of two hazelnut cookies with a thin layer of Nutella in between.

From the first to last nibble, it was a flavorful pleasure like shifting through the gears on a Murcielago through the hills of Tuscany.  The cookies were soft, fresh, and nutty which balanced out the sweet innards.

As for Janice’s saccottino, it was a pastry made with croissant dough that had an extremely thick schmeer of the hazelnut topping that bordered on the obscene.

I’d recommend they cut down on the Nutella, or you get a drink to go with this dessert.  Perhaps that is all part of their scheme for you to buy more merchandise since half way through it it felt like I was eating a ball of glue coated in chocolate.  It was tasty nevertheless.

In summary, Eataly is a wonderful place for foodie and tourists alike, but it’s not the cheapest place in the world to experience all of Chicago’s culinary potential.  That is not to say though that you will be ripped off since everything is extremely high quality for the price.  I finally visited it, but I don’t know if it will be a regular haunt on my food list in Chicago.