Welcome one and all to another molto bene Mastication Monologues!  Today’s entry deals with a food that has recently been linked to the epidemic of childhood obesity:  pizza.  Sadly, kids may love this cheesy treat, but it doesn’t love them back.  Still, who can honestly admit that they don’t enjoy a fresh slice right out of the oven with your favorite toppings from your favorite spot without any of the fuss of shopping, cooking, and then cleaning dishes?  This wonderful feeling of culinary satisfaction can be found at a local pizza spot by me called Zazzo’s Pizza in Darien, IL.

While I have had my fair share of different types of pizza from different parts of the globe, Zazzo’s is one of the front runners for a great thin crust pie.  I had never really paid it much mind as I went about my business to the the various stores in the area, but one day my parents had a coupon for it.  Thus the legend was born in my knowledge of all things food.  So, I decided to bring my girlfriend to the local eatery for dinner.  I was surprised to find that this pizzeria bought out the empty storefront next to it to build a new bar and dining room which essentially gave them ten times the capacity for revenue.  They’ve come a long way from the three tables along the front windows.  The new digs had a basic sports bar vibe, so no need for any sort of fancy attire. 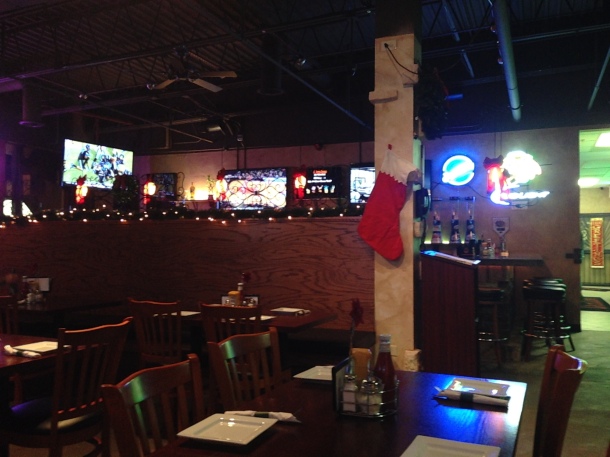 The menu had the same no-frills approach as they focused on bar food and Italian cuisine. 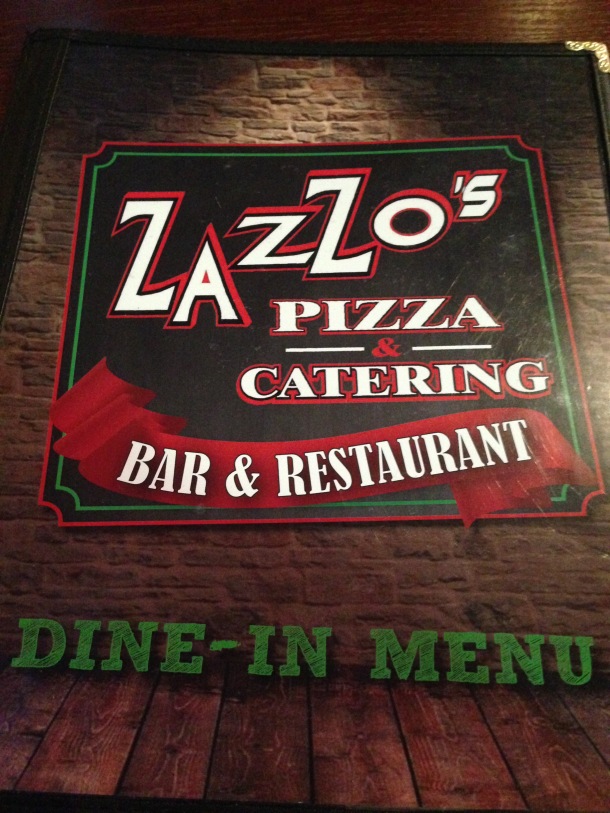 We started the meal by sharing an order of spinach artichoke dip ($9.95).  This was a great appetizer since it came with both hot, crust Italian bread along with warm pita bread triangles. 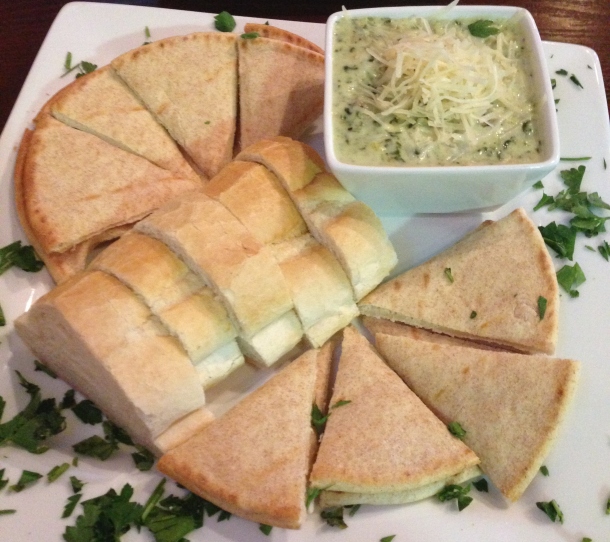 The dip was also warm with a nice sprinkling of fresh Parmesan cheese that gave the artichoke chunks a slightly salty and nutty aftertaste. 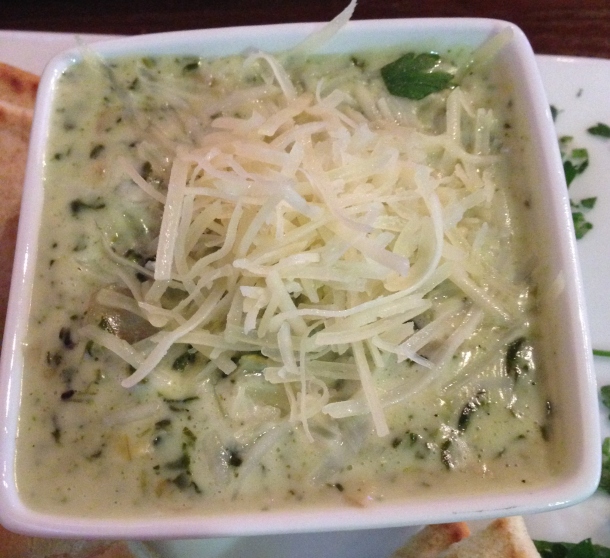 We then went for the 14″ Veggie Special thin crust pizza ($21.10).  Now, it serves three, but when I’m hungry, I can really throw down, especially when it comes to Zazzo’s.  When it came out, it was just as good as I remembered it. 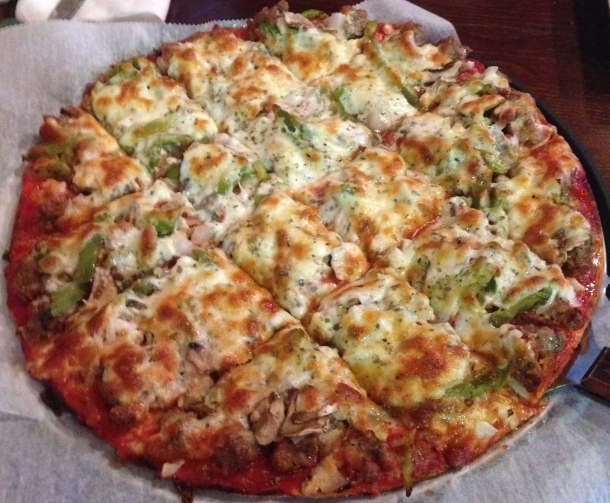 It was large and in charge with an enticing smell that immediately tells you that you’re in for a treat.  The Veggie Special consisted of an adequate amount of mozzarella combined with mushroom, green pepper, onion, and fresh tomatoes. 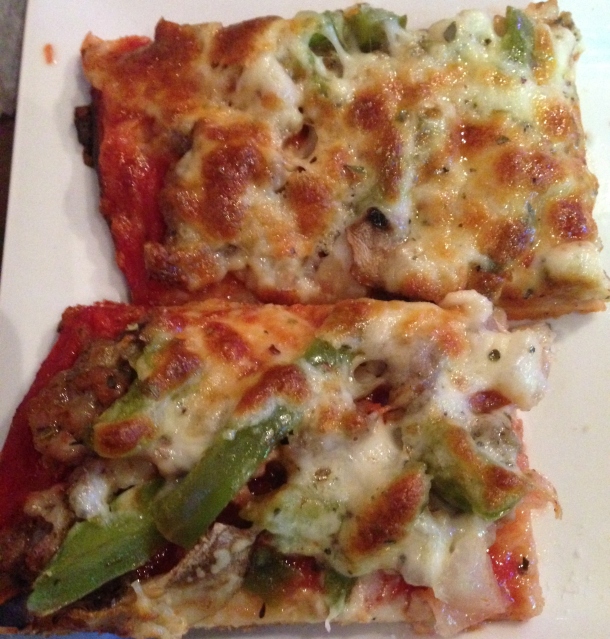 Each ingredient was as plentiful and fresh as the next.  As for the sauce, it was just the right amount where the crust wasn’t dry, but it also wasn’t gushing out with each bite like you’re doing your best Jaws impression (the killer shark, not the killer giant from the James Bond series). 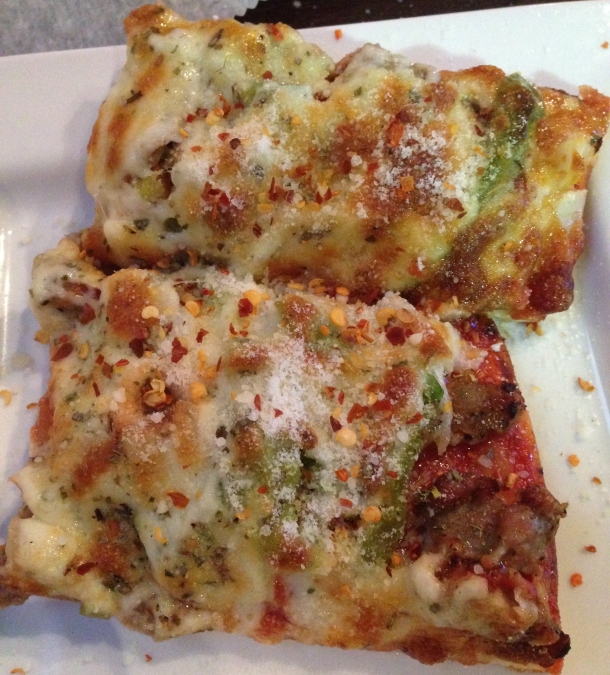 Then there was the crust.  I believe that this foundation of the pizza can either make or break the dish, and in Zazzo’s case I love their thin crust.  It’s not super NYC thin but not deep dish thick.  It has a light powdering of flour on the edges, and it has an almost airy like texture with a crunch that doesn’t hold back.  All of these elements make it one of the hidden gems of the pizza world in the Chicagoland area.

So if you are looking for a great pizza place in the western Chicago suburbs and don’t want to visit one of the big pizza chains like Giordanos or Uno’s, check out the pizzeria with a lot of pizzazz:  Zazzo’s Pizza!