Pigging Out In Hongdae (Beale St.)

Hello and bonjour everybody!  The summer is slowly but surely floating along as I’m struggling to cope with this unbearable heatwave that has struck Korea.  Energy-draining and lung-flattening humidity aside, I finally managed to make it out to a new restaurant in Hongdae in Seoul.  Now, I’ve been perusing a food blog or two trying to find newly opened places or niche cuisine eateries, but my friend’s birthday party turned me on to a pretty standard restaurant with some offbeat choices.  I’m talking about Beale St.  located at 363-28 Seokyo Dong Mapo Gu.  It’s right next to Burger B, the original establishment we were going to check out.

When I saw the name of the restaurant, Beale St., I was brought back to one of my most enjoyable vacations to Memphis, Tennessee.  I went with my family to Memphis to see Elvis’ Graceland and of course, taste that delicious barbecue.  Beale St. is the main thoroughfare in downtown Memphis.  Check out my other post that I wrote about another burger joint in Memphis with absolutely mammoth, mouth-watering onion rings (Click Here For The Post).   Naturally, I saw that the walls in Beale St. were festooned with various types of American kitsch like old gas advertisements, instruments, and even a Graceland sign. 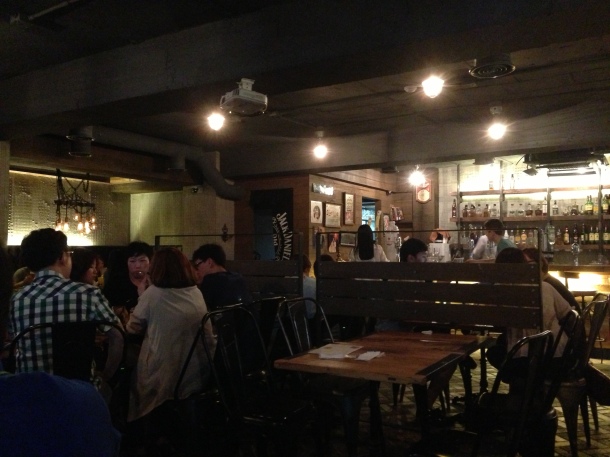 Anyway, to the food.  Looking over the menu, I saw that they were staying true to Memphis’ barbecue legacy with a laundry list of classics like a half/full rack of ribs (23,000 W/43,000 W, respectively), burnt ends (16,000 W), and their chicken “boobs” (10,000 W) that apparently are bbq chicken breasts (tee hee, you so funny, Beale St.). They have a great beer and liquor selection that would be rare to find in other restaurants in Korea.  They also have the menu from Burger B next door, so you can order a burger like almost everyone else in my party group did.  I heard they were pretty good based off their reactions, but I went for two off-beat choices from Beale St.:  chicharron popcorn (4,000 W) and boudin (pronounced “boo-dahn”) ball (5,000 W).  They were both washed down with a heavenly vanilla-caramel milkshake (7,000 W).

First, there was the chicharron popcorn.  Most people know what popcorn is, but I’m pretty sure no one at my table knew what the slightly bizarre items were on top of the popcorn.  Growing up in the Chicago area where we have the 4th highest population of Mexicans in the USA, I was exposed at an early age to the different foods of that culture like chicharrones.  While the chicharrones may look like some sort of puffy rice cake, they are actually pieces of pork skin that are seasoned and deep fried in order to make a tough, inedible piece of the pig edible.  So when they came out, it was a basket of popcorn loaded to the top with chicharrones.

Normally when eating chicharrones, you’d like to put some hot chili sauce on them to give them a bit of a flaming zing, but Beale St. thought of that for me.  They managed to put a semi-sweet glaze over each curled piece, and then doused them with a perfect amount of dry chili rub.  The popcorn was prepared in the same fashion that really was a change of pace from your typical butter laden bucket you’d find at your local movie theatre or at home.  As for my other mini-entree, I was intrigued to see how they interpreted the Cajun boudin balls.  For those who don’t really know that much or anything about Cajun cooking, let me explain.  The Cajun culture arose from French-speaking Acadians who immigrated from Canada to what is modern day Louisiana in the USA back in the 1700s during French and British hostilities in the Seven Years War.  The Acadians created their own ethnic and cultural enclave that has left an indelible mark on Louisiana especially on the music scene with zydeco, their own variety of French still spoken today, and especially the food realm with their rustic French inspired dishes.  This leads me to what boudin is.  It’s a pork sausage that can be made with blood (boudin rouge) or without (boudin blanc) and stuffed with ground pork, Cajun spices, and dirty rice (Cajun rice cooked with pieces of liver and gizzards).  The balls, however, were made by rolling this filling into small spheres and deep frying them.  Given this explanation, I was a bit confused that they had Cajun food like gumbo, jambalaya, and boudin in a restaurant focused on cuisine from Tennessee.  Maybe they mixed up Memphis’ Beale St. with New Orleans’ Bourbon St..  Either way, I was satisfied even though the balls really could have been bigger for the price.

The bread crumb shell was a beautiful golden brown while the inside was a bit too mildly seasoned for proper Cajun cuisine, but they tried to make up for it by using a spicy Korean gochujang-based sauce that was drizzled over these tasty nuggets.  The overall quality of the rice and pork melange was superb though.  I assumed the Korean owners would get right these parts of the boudin right since they’re two staples of the Korean diet. 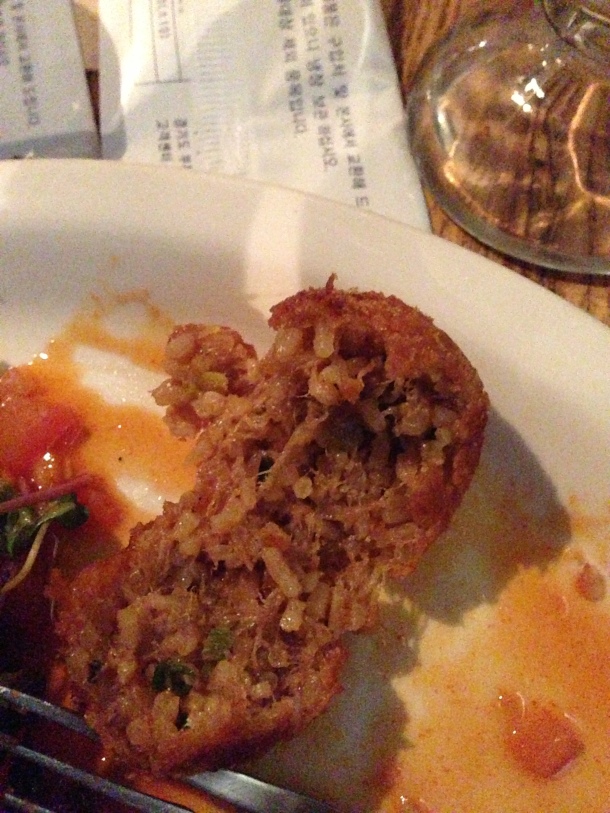 On the side, there was a lovely clover salad that was gingerly dressed in a sweet vinaigrette that provided a light balance to the dense, meaty richness of the boudin.  Finally, there was the milkshake…lord, the milkshake.

It was simple in presentation, but flavor-wise it was quite elaborate.  Whilst the buttercream element of the vanilla started off each sip, there would be a lightning bolt of sugary caramel that would flash across my palate and hit my pleasure zone every time. I would recommend this twist on an ice cream shop classic to anyone.

Overall, Beale St. has a slight identity crisis with the items on their menu, and they are a bit on the expensive side.  Regardless of the price, if you want well made burgers, barbecue, and Cajun cuisine, you will not be disappointed.  To quote the immortal Cookin’ Cajun, Justin Wilson, “I guarantee!“.