RSS Feed
← What Can Brown Do For You? Answer: Delicious Food
Multum In Parvo →

Everytime a Cowbell Rings a Devil Gets His Wings

WARNING:  If you think jalapenos are spicy or if this (see 0:40 and on)happens to you when eating dry chili flakes or do not have a stomach for spicy food in general, do not try this eating challenge!!

Hello to everyone out there in the blogosphere!  I am writing this post after a very eventful and historic day in my eating adventures.  Now for those who know me/read my (amazing) blog, they can tell you that I am not one to shy away from eating spicy foods.  In fact, I seem to revel in the challenge to see how much fire I can eat in one sitting.  One day a certain Man vs. Food host in conjunction with the Travel Channel highlighted a Chicago hot-spot for getting some of the fieriest chicken wings in the nation which I will be reviewing today.  The place in question is Jake Melnick’s located on 41 East Superior Street  Chicago, IL 60611.

I checked out their website to see what exactly these XXX wings were made of, and I found out that they used both the Ghost Chili and the Red Divina which is an extremely spicy strain of Habanero.  Now, the actual heat level of the peppers can vary depending on where they’re grown due to various factors such as rainfall, elevation, and sun exposure.  However, I did the Scoville unit math according to Wikipedia’s page, and their combined spiciness is equivalent to standard issue law enforcement pepper spray.  Somehow this didn’t stop me, so I went there to test my mettle.

My bell and my brew (IPA, fyi)

This action would lead to the staff bringing out a “cool off” tray which consisted of a glass of milk, a cup of sour cream, and some white bread.  Little did they know I had the eye of the tiger to finish off the wings. 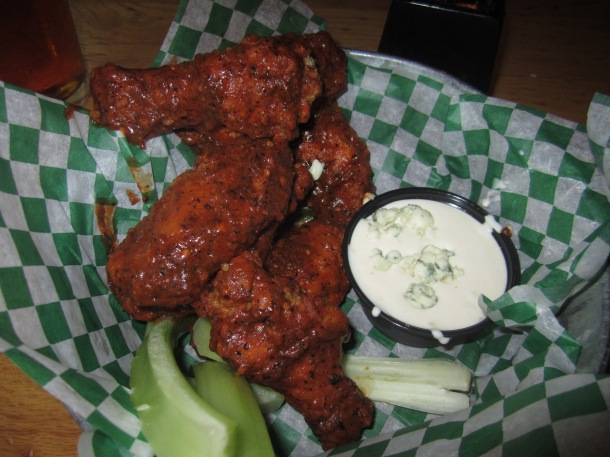 Hell in a hand basket

When they were presented to me, I was intrigued by how they looked since they weren’t glowing or smouldering or looking like pure evil.  However, I did notice a particular pungent aroma when I moved my face closer to them lying upon each other like eight little red smouldering coals nestled in a little hibachi.  I also got a side of blue cheese just in case I couldn’t handle the heat, and the celery was complimentary.  So I started off with the first wing, and I was expecting to get punched in the face with a fireball of spice.  Surprisingly, I was greeted instead with a savory and slightly garlicky heatwave that just spread the proverbial gasoline on the inside of my mouth. 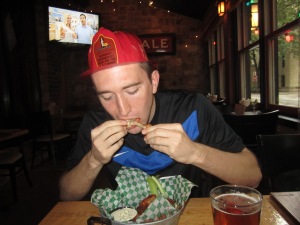 The first wing goes down for the count

The next four to six wings decided to have a firework party while playing in the aforementioned gasoline a la Zoolander.  At this point, the back of my throat was quite scratchy and almost numb.  My lips and the surrounding area on my face just felt like it was touched up by a flamethrower, and I had a good sweat going on the whole time.  Plus, I kept in mind a key element to eating any sort of spicy food with your hands:  don’t rub your eyes even if you have an itch anywhere around them. I did try a wing or two in the superbly made blue cheese sauce that had whole blue cheese crumbles in it which was so much better than the blue cheese sauces I’ve sampled at Hooters and Buffalo Wild Wings.  While all of this was going on, my waitress kept coming by expecting the cowbell to be ringing out for mercy, but I just kept on truckin’ (like I’d ever stop truckin’ in the first place).  By the last wing, I downed it with gusto as my nose began to run slightly.  Perspiration aside, I knew that I had done something impressive especially judging by the shocked reaction from our waitress.  So I ended up getting my picture up on the digital Wall of Flame and the knowledge knowing that I had survived one hell of a challenge.  Unfortunately, they did not let me celebrate in true Will Ferrell fashion with adding more cowbell to the victory.

I'm a food lover who would like to share my many adventures throughout the culinary and geographical world. A good meal or snack can unite people from all walks of life, and new stories can be created from meetings around a table or face to face in a quiet cafe. In this blog, I will share various experiences I've had over the years, and hopefully you'll adventure outside your usual gastronomic choices to try something new and unusual. Bon Appetit, Buen Provecho, and Buon Appetito!
View all posts by Mark T »
← What Can Brown Do For You? Answer: Delicious Food
Multum In Parvo →