Nothing says, “Fall is here!” better than pumpkin spice lattes from Starbucks, football, and chicken wings, right?  Well, actually that last one is always good year round, but it could make the terrible Bears season we’re experiencing a bit less sucktacular.  Am I right?  So today I’d like to recommend a little slice of comfort food heaven in Evanston called Buffalo Joe’s.

We went to this small eatery on a balmy summer night, and it was simply furnished inside and outside.

This no-frills diner translated to a walk up and order type of restaurant.

Their menu consists of plenty of bar food even though it’s not a bar per se, so expect plenty of burgers, hot dogs, Italian beef sammiches, salads, gourmet baked potatoes, chili, and of course, the wings.  I love my chicken in general and the spicier the better.  So, we got a double order of wings ($14.59), half tossed in mild sauce and the other half in the suicide sauce.  We also got an order of the Buffalo Chips ($2.89). 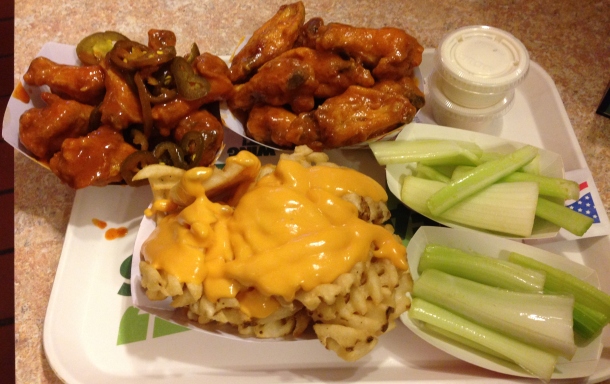 After a bit of waiting, they shouted our order was ready, so we grabbed the grub and found an open booth.  It was like a fast food restaurant that somehow wasn’t one since they had the signature mid-90’s Burger King seats made with thick slats of wood, but there wasn’t a paper crown in sight.  Buffalo Joe’s made up for the decor with the Simpsons on the tv along with some delectable looking food.  I started on my wings which I got at least 10 to my order.

While they were neither as enormous as the wings at Hooters nor as hellish as the ones at Jake Melnick’s, they were good pieces of chicken.  There was ample meat on bony wings that could have had next to nothing, but I thought they had a fair amount of meat for the price.  As for the “suicide” sauce, I think it might have been hazardous to most diners’ health, but my taste buds and stomach are far from new to consuming fiery meals.  Ergo, I found their suicide sauce to be almost like a typical buffalo sauce with a vinegar kick and a bit more spice than normal that was amped up with the sauce-slathered jalapeno pepper slices.  I think the mild wings were a bit better since the vinegar tinged flames gave way to a more buttery/savory/smoky flavor that was enhanced with the ranch dressing on the side.  Then there were the buffalo chips.  Even though their name means something a bit more repugnant than some fried potatoes (buffalo poo), the flavor and appearance were much more appeasing to the senses.  I can never say no to waffle fries, and the super fake nacho cheese were the icing on the cake (or perhaps the dairy on the tater). There were only two downsides to this side.  First, there was the soggy factor that happens in any sort of nacho cheese situation.  While the top chips were crisp and coated, but bottom ones were drowned beneath the yellow waves.  That was the other bad part of the side was the cheese itself.  I think that they overdid it a bit because I felt like I was swimming in a squeeze cheese pool by the end of of the meal.

So if you’re tired of scantily clad waitresses or ten billion tvs blaring sports stats at you STAT!, check out the laid back atmosphere of Buffalo Joe’s!

I'm a food lover who would like to share my many adventures throughout the culinary and geographical world. A good meal or snack can unite people from all walks of life, and new stories can be created from meetings around a table or face to face in a quiet cafe. In this blog, I will share various experiences I've had over the years, and hopefully you'll adventure outside your usual gastronomic choices to try something new and unusual. Bon Appetit, Buen Provecho, and Buon Appetito!
View all posts by Mark T »
← Everything’s Coming Up Roses
Bro-ing Out with the Apple of My Eye →