RSS Feed
← Where’s the Kimchi?
A Slice of the East →

I See A Bowl of Noodles, I Want To Paint It Black

Hello to everyone out there in cyberspace.  Today on Mastication Monologues, I am going to tell you about a Korean dish that I heard about very briefly in reference to Black Day in Korea where single people come together to hangout (kind of like an antithesis to the much commercialized Valentine’s/White Day) and eat a meal called jajangmyeon.

I actually had it today for lunch with my coteachers at my new elementary school.  They initially told me they were going to be ordering “Korean Chinese” food.  I knew that Incheon had the largest Chinatown in Korea, but I didn’t know what exactly they meant by this fusion term.  I asked for clarification, and they said, “You can get fried rice or black noodles.”  Done.  I was going to get the bizzare sounding black noodles.  Originally I was thinking that they were going to be black due to the addition of squid’s ink, but what faced me was very different. 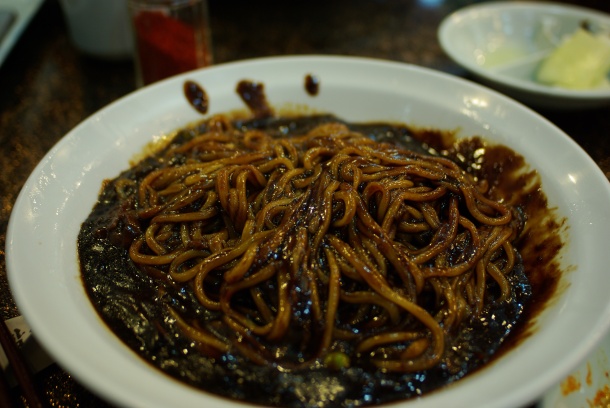 It was a massive mound of wheat noodles staring back at me in a dark dark brown sauce.  I found out that it is nearly identical to the Chinese noodle dish zhajiangmian (fried sauce noodles) hence the teachers basically telling me it’s a Chinese dish that the Koreans adapted to claim it as their own. It wasn’t an ideal dish to eat with chopsticks, but I managed to eat it all.  It wasn’t the prettiest thing, but the savory taste of the noodles was spectacular.  It was semi-sweet in nature with a salty pork taste permeating every noodle laden mouthful.  There were also onions in the sauce that kind of gave it a nice zing on occasion.  On the side, there was the ever-present Kimchi, but I had some bright yellow, pickled radishes that I never had before.  It actually tasted like a pickled cucumber back home.  I didn’t touch the raw onion since I was at work, but the black fish sauce added a potent, semi-jarring element to the sweet noodle sauce.  I also sampled some Korean deep-fried dumplings that looked like Chinese pork empanadas.  They were fresh but semi-pedestrian.  Of course, I washed it all down with a cup of Coca Cola.  Hooray for globalization!  This was definitely a cool look into Chinese-Korean relations in regard to food, and I’d probably get these black noodles again.  Maybe I’ll do so during a trip to Incheon’s Chinatown.  To be continued…

I'm a food lover who would like to share my many adventures throughout the culinary and geographical world. A good meal or snack can unite people from all walks of life, and new stories can be created from meetings around a table or face to face in a quiet cafe. In this blog, I will share various experiences I've had over the years, and hopefully you'll adventure outside your usual gastronomic choices to try something new and unusual. Bon Appetit, Buen Provecho, and Buon Appetito!
View all posts by Mark T »
← Where’s the Kimchi?
A Slice of the East →