Bacon, Potatoes, and Pinapples Oh My!

Hello everyone and welcome to another installment of Mastication Monologues!  So I’ve officially been in Korea for one month, and it seems like it has flown by even though every day felt like it was moving as slow as molasses.  When it comes to culinary adventures, however, it has been quite a whirlwind tour.  I’ve had a plethora of Korean specialties and so many different types of rice cake that they could probably fill a phone book.  However, today I will be relating my experience of trying Korean pizza for a second time.  In comparison to the first time trying Korea pizza from Pizza Maru in my previous post, “A Slice of the East”, the pizza from Pizza Etang was delicious yet peculiar in wonderful way. 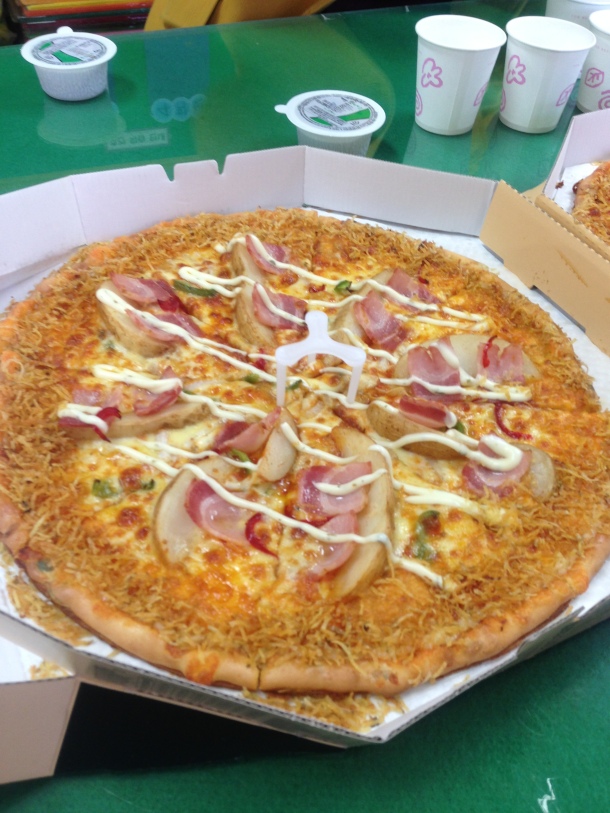 First, there were the circumstances in which I consumed said meal.  I had just finished a day of teaching 5th grade, and everything went quite well aside from witnessing some intimidating Korean teacher discipline after the bell rang in one class.  After eating a large Korean lunch of random rice dishes and a soy sesame sauce that was way too salty for its own good, a delivery man came into our teacher room in with a bottle of Coke.  I went back to work in my cubicle thinking nothing of it, but next thing I know, I’m being invited over for a group meal of pizza and Coke with my co-teachers.  Turns out my 5th grade teacher ordered it to celebrate my first month in Korea and because she was angry at students (I think that was lost in translation haha).  Anyway, the first pizza I tried was the potato and bacon pie.  It was very decadent since it combined fatty meat, starches, and a ranch sauce.  The bacon was on the chewier side and had little to no seasoning (neither smoking nor encrustments).  Crunchy bacon lovers look elsewhere if you’re getting this pizza.  It was like having a loaded baked potato sans sour cream on a pizza because there wasn’t the traditional layer of tomato sauce underneath the cheese.  I’ll comment on the crust at the end since it’s unlike anything I’ve ever had. 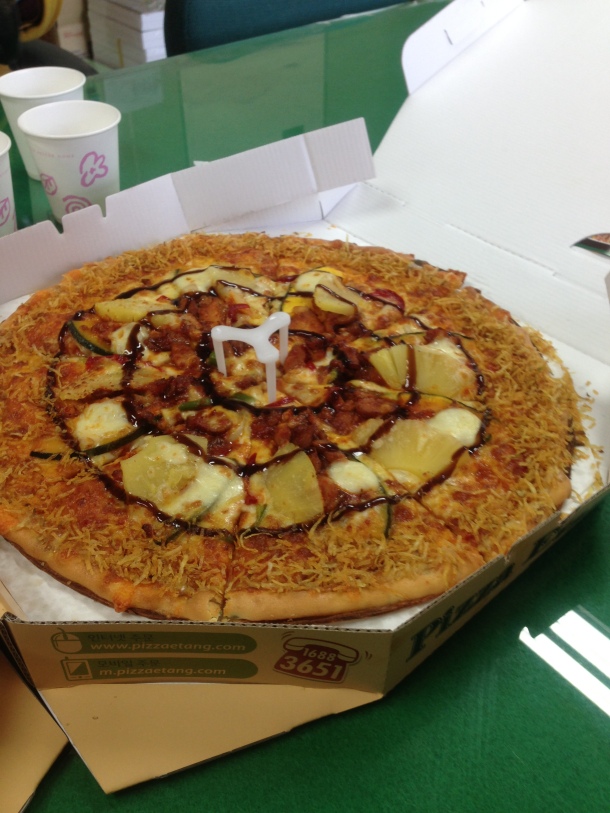 The second pizza consisted of the same crust and was sporting not just cheese but zucchini, sausage, and pineapple.  The cheese and lack of sauce was similar to the previous pie, but the other toppings were surprisingly tasty together.  Now I, along with one of my heroes, Anthony Bourdain, think that Hawaiian pizza is one of the worst creations in the world.  I mean, who puts ham and pineapple on a pizza?  Blasphemy, I say, but with this Pizza Etang pinapple pizza, it somehow changed my mind in regard to pineapple’s status in the hierarchy of pizza toppings.  I think that it helped that the sausage crumbles it was paired with had slight bacon and herbal tones to lessen the saccharine overtones of the pineapple pieces.  The zucchini also managed to contribute a complimentary, earthy springboard from which the previously mentioned flavors could fully express themselves on my palate.  As the first pizza had a drizzling of ranch dressing in a spiral pattern, this pineapple pizza had barbecue sauce.  This savory element with the pork sausage and pineapple made it taste like I was at some sort of Hawaiian luau.  Take notes American pizza chains!  Now to the oddest part of the pizza:  the crust.

Coming from Chicago, I’ve seen my fair share of pizza crusts from the worst frozen cardboard disks to deep dish wonders of flour and buttery perfection.  Now that I’m in Korea, some of the creations I have tried have been complete game-changers.  Pizza Maru promoted their healthy dough that contained green rice and black Korean rice, but Pizza Etang went in their own direction with the actual construction of the crust that seemed to be flour based (I wouldn’t be surprised if it was rice-based, though).  Right after the cheese/toppings ended on the slice, I entered an area that was somewhat amorphous with the actual crust handle of the slice.  It was dusted with minuscule, toasted potato shavings and beneath it was an extremely thin layer of Korean sweet potato baked into the crust.  I had to closely inspect a slice to see what was causing the crust to taste so scrumptious, and when I found the lurking tubers, it made sense why the crusts provided the perfect semi-sweet flourish to each slice.

So if you’re looking to try some pizza with a unique crust and fresh toppings in Incheon and probably Seoul, try Pizza Etang!

I'm a food lover who would like to share my many adventures throughout the culinary and geographical world. A good meal or snack can unite people from all walks of life, and new stories can be created from meetings around a table or face to face in a quiet cafe. In this blog, I will share various experiences I've had over the years, and hopefully you'll adventure outside your usual gastronomic choices to try something new and unusual. Bon Appetit, Buen Provecho, and Buon Appetito!
View all posts by Mark T »
← A Dirty South (Korean) Classic
It’s a Good Day to Fry Hard →