RSS Feed
← On Top of Mt. Everest, All Covered With Cheese….
Egg and Rice That’s Really Quite Nice →

Hello everyone and welcome to another edition of Mastication Monologues!  Today I will be talking about a Korean dish that is another adaptation of a “Japanese” dish:  shabu shabu.  First, even though everyone thinks that shabu shabu is Japanese, its roots stretch all the way back to Mongolia, and the meal was made popular in Japan after WWII.  Then Korea acquired it through Japanese occupation and made it their own.  Which brings me today when my principal and vice-principal treated all of the teachers to a celebratory dinner before the midterm exams at Yoree Shabu Shabu in Incheon.

I already knew that shabu shabu involved putting raw pieces of meat in boiling water, and then swishing them about to cook them.  Hence the name, “shabu shabu” which is supposed to be the onomatopoeic representation of the meat moving about in the bubbling cauldron of water.  So, when I sat down to enjoy the meal, I suddenly had a moment of deja-vu.

I think we’ve met before.

Looking at the mini-mountain of beef bales and the steaming pot of broth, assorted greens, and enoki mushrooms, I was brought back to the Chinese/Taiwanese hot pot dinner at my friend David’s house (Part 1 and Part 2).  However, it was different because the broth was on the milder side instead of boasting bold Sichuan spices, and Yoree Shabu Shabu also allowed us to help ourselves to their buffet.  I’ll describe that later, but first, the shabu shabu.  Once I found some pieces of beef that were fully cooked, I gingerly took them out and placed them in the side dish of soy sauce, vinegar, and wasabi. 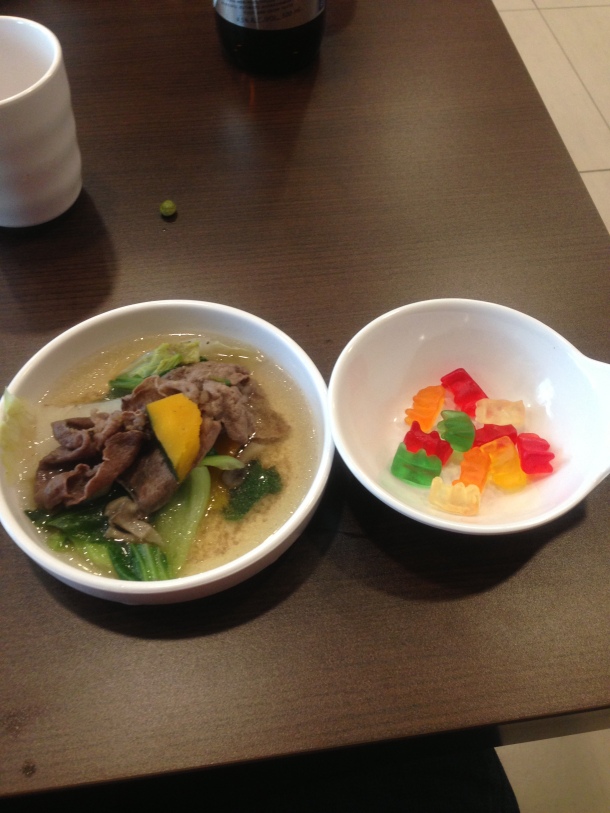 Yeah…I got a side of gummi bears with my shabu shabu.

The meat was succulent and flavorful, but I personally wasn’t a fan of diluting the potent kick of the wasabi by putting it in the soy marinade.  I even noticed that there were a couple of pieces of orange squash that were bobbing about in the soup, but they didn’t have much flavor aside from the beef I was enjoying.  I did like the mushrooms and the greens though because they added some body to the meal, especially the kale leaves with their semi-bitter bite.   Shabu shabu aside, the buffet at Yoree was fantastic.  Not only did it have Western classics like bread that isn’t filled with sugar, Cinnamon Toast Crunch, and Caesar salads, but they even had pretzels filled with peanut butter and…gummi bears.  Yeah, I had to restrain myself from attacking the whole plate, but needless to say I was overjoyed at seeing gummi candy towards the end of the dessert table.  When I say “dessert” table, I just mean that there was fruit, not cake or anything like that.  They also had standard Korean dishes like different types of rice cake, apple salad, cucumber salad, and kimchi, per usual.

So overall, I had a great time at Yoree Shabu Shabu, and I recommend this place to anyone who wants to try a Korean twist on a Japanese classic or is missing some Western food but doesn’t want to go all the way to Itaewon to get some guilty pleasures.

I'm a food lover who would like to share my many adventures throughout the culinary and geographical world. A good meal or snack can unite people from all walks of life, and new stories can be created from meetings around a table or face to face in a quiet cafe. In this blog, I will share various experiences I've had over the years, and hopefully you'll adventure outside your usual gastronomic choices to try something new and unusual. Bon Appetit, Buen Provecho, and Buon Appetito!
View all posts by Mark T »
← On Top of Mt. Everest, All Covered With Cheese….
Egg and Rice That’s Really Quite Nice →