Well, back to Korea again after another wonderful adventure overseas.  This time it was to the Land of the Rising Sun a.k.a. Japan.  Now, I know Japan has left quite a Godzilla-sized cultural imprint on the world with technology, car manufacturing, and maddeningly-cute cartoons like Hello Kitty and Pokemon.  In these posts, like all the others, I will be showing you a gastronomical glimpse of the land that has brought sushi, tempura, and sake to a wider audience.  Naturally, there is much more to Japanese cuisine than just these three components, and I hope to demonstrate this through my Tokyo food series.

After touching down in Narita, I was bracing myself for the train system which is the most complicated metro system I’ve encountered on my travels not due to its size but rather due to the number of private train companies that operate different lines which in turn affect fares, travel times, and how one manages to get from point A to point B based on which line and exit they take.  After a long time with the train info lady and making the sojourn to my hostel, I explored the neighborhood a little bit before heading back to my hostel to get some dinner ideas.  I talked to Hiromi at the front desk while showing her my handy-dandy personal guide I normally write up before I go places.  Thank you, Wikitravel!  I asked her about one restaurant, Torafugu Tei, and she immediately lit up with excitement.  It was probably because fugu is a Japanese deliciacy which involves making sushi out of an extremely poisonous blowfish.  Chefs have to have a special license in order to even serve the fish on the premises.   Roughly five people a year still die from this goofy-looking fish whose vital organs are deadlier than cyanide, and it’s the subject of one of my favorite Simpsons episodes where Homer thinks he’s going to die from ingesting improperly prepared fugu.  So I liked those odds for my first dinner in Tokyo.  Hiromi also recommended the sperm sacks which apparently were a winter specialty and her favorite part of the fugu since they tasted like cheese.  Turns out there are multiple locations in Tokyo, and I went to the one closest to my hostel located at 2-14-15 Nishi-Asakusa, Taito-ku, Tokyo.  Mind you, they’re only open from 5 p.m. onwards.

I got a picture of the floating pufferfish, mouths still agape, while thinking this might be my last meal. 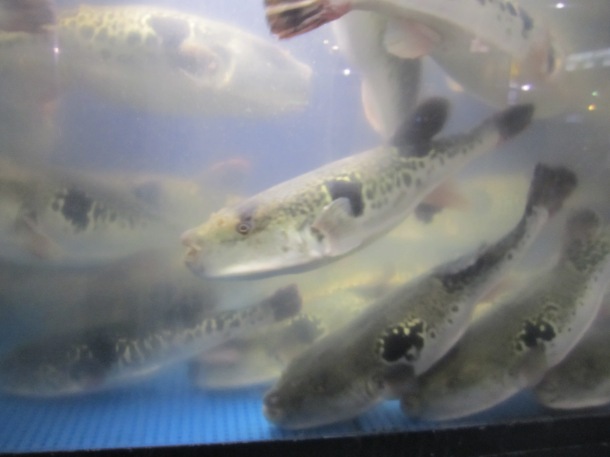 I’ve had it before during my trip to Busan in South Korea in soup form and survived, but this was raw fugu in the heartland of Japan.

Eventually I came in the restaurant behind some old Japanese businessmen, and the waitress thought I was with them for some bizarre reason.  She told me to take off my shoes, but as soon as the leader of the old men gave me the ‘What you doin’, gaijin?’ look, I was out of that room.  No one spoke English there, so it was just a humorous episode of confusion.  I was seated in a cosy wooden room, and I went for the fugu sashimi, the sperm sacks, and Hoshuku sake from the Nara prefecture served warm.  They brought out the sake first in a petite flask with an even tiner cup.  It was smaller than the cups I used to drink with my Kindergarteners.  However, it was a smooth, warm elixer with a bit of an acidic, alcohol-tinged bite to the end of each sip.  Eventually, my sashimi came out complete with a sumptuous presentation of each translucent slice arranged around sliced fugu skin, wasabi, green onions,  and a perrilla leaf. 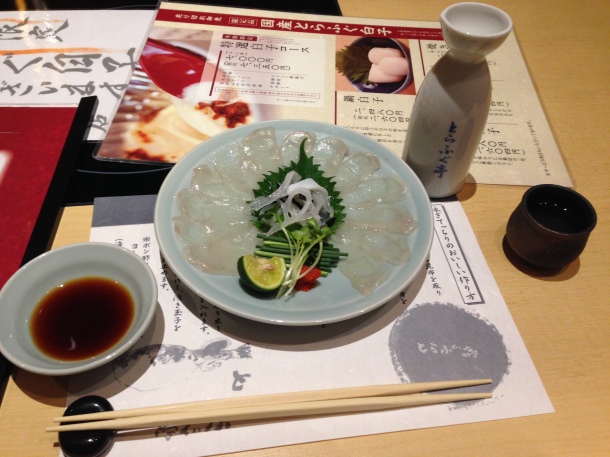 The waitress motioned for me to squeeze the lime to coat all of the fugu pieces which I subsequently did.  She then imitated making mini fugu tacos and dipping them in the soy sauce on the side.  I summoned all of my chopstick skills which was a bit hard since the pieces were sticking to the plate and were extremely delicate.

Eventually I got the wee concoction into my mouth, and it was glorious.  The lime with the subtle richness of the fugu went well with the bolder wasabi and onions.  After eating most of the dish, I noticed my lips were slightly tingling which made me brace myself to hit the floor while being asphixiated, compliments of the poison, but it never happened.  The sake was also a nice palate cleanser to segue into the plat du jour:  the fugu sperm sacks.

They were served in a small porcelain bowl which I uncovered to find four golf ball-sized orbs that seem to have been roasted based on the char marks. 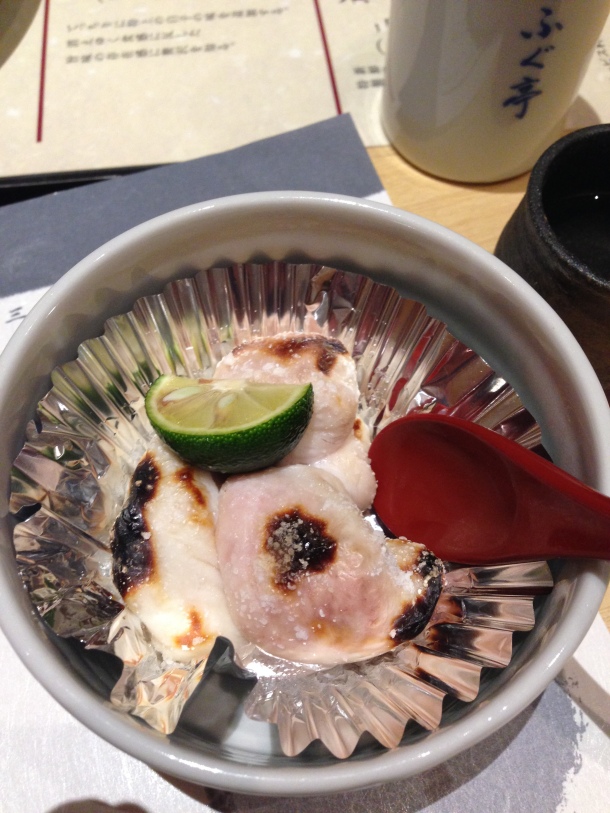 I decided to just take a bite out of one of them, and I was greeted with a piping hot stream of fugu semen.  Even though I was semi-injured due to my tongue being burned and quasi-violated based on what I was eating, I soldiered on after letting the sacks cool off.  I used the spoon that was provided to actually taste the semen, and strangely enough, like Hiromi told me before, it tasted like cheese.  I’d liken it to a cheddar flavor.  When the last drop of sake left the cup and my bowl was empty, I didn’t feel like I was full, but the meal amazingly kept me satiated for the rest of the night.  I guess the danger factor fed my adventurous soul along with my adventurous stomach.  I’d recommend it for anyone in Tokyo looking for a twist on your typical sushi experience.

I'm a food lover who would like to share my many adventures throughout the culinary and geographical world. A good meal or snack can unite people from all walks of life, and new stories can be created from meetings around a table or face to face in a quiet cafe. In this blog, I will share various experiences I've had over the years, and hopefully you'll adventure outside your usual gastronomic choices to try something new and unusual. Bon Appetit, Buen Provecho, and Buon Appetito!
View all posts by Mark T »
← Beijing (Day 5)- Bruce Lee and Me
Tokyo (Day 2)- Whale of a Tale/Silent But Delicious →