RSS Feed
← All About My Cheddar
Ribbed For My Pleasure →

The DMK: The Most Flavorful Border in the World

Burgers, burgers, and more burgers.  What is more Amurikan than a hamburger?  It is one of our quintessential exports among many other items across the globe, and I don’t blame other countries for imitating our homegrown culinary creation.  One of the reasons why I think that hamburgers are so popular is that they are simple.  A slab of meat (or vegetable matter for you vegans or Hindus out there) between two pieces of bread?  It’s the biggest thing since mankind figured out how to slice said bread.  While many would consider something simple to not be worthy of their time, herein lies the genius of the hamburger.  The basic makeup of the hamburger allows plenty of artistic licence for cooks around the world to leave their culinary fingerprints on this common menu item.  While I’ve had burgers in the Memphis, Seoul, and Pyongyang (or at least what I thought was a hamburger) to name a few locations, DMK Burger Bar in Chicago made one of the best ones I’ve had in my life.

I had tried to go to DMK for dinner before, but there was a two hour wait.  So I went there during the lunch hour with Janice, and it was easy enough to get a table.

She had been there before, but I was curious to see what made this burger joint so popular.  Their menu had your basic burgers and sides like fries, but they went above and beyond the standard fare like sliders, bison burgers, and fried okra.  I eventually settled on the number 6 burger ($9), and we split an order of the small cheddar fries ($4).

Our food came out, and I needed a towel with how much I was slobbering.  First, there were the cheddar fries. 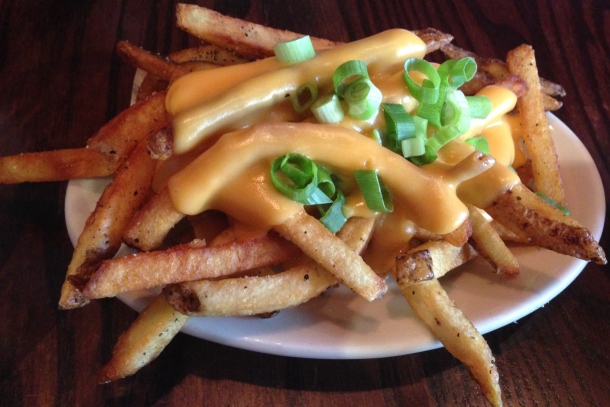 While the cheese wasn’t oozing down every nook and cranny of the fry pile, I think it helped the dish since it didn’t cause the fries to become a soggy mess.  The potato sticks were nicely fried with a pinch of salt which harmonized with the silky smooth cheese and sprigs of flavorful onions.  A prelude to the glory I subsequently experienced in the form of my burger. 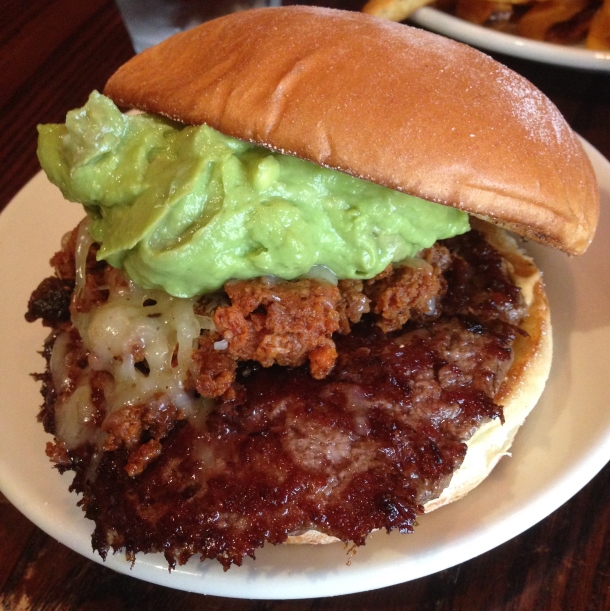 I didn’t know whether to cross myself, grab a napkin, or bow down to the masterpiece of beef, bread, and Mexican flair sitting across from me.  After admiring my meal, I slid the buns together, I could see a bunch of guacamole peaking out from the bread.  It coated my mouth from bite one, and it was full of the zesty, cilantro tinged flavor I know and love.  The beef patty was thick, juicy, and flavorful with seasonings which were further magnified by the spicy pepper jack, piquant Mexican chorizo sausage, and creamy yet intriguing chipotle mayo.  However, the best part, I thought, was the bun.  I don’t know what it was about it, but it was semi-crunchy, fluffy, and substantial.  All qualities I dream for in a hamburger bun.  I also tried part of Janice’s veggie burger that had a fried, vegetable-based patty that had a spicy kick compliments of the red peppers.  For a meat lover, I still enjoyed this greener alternative.  If you thought my meal was done there, think again, n00bz!  I pushed DMK to the limit by getting one of their signature milkshakes ($5).  I couldn’t say no to the peanut butter flavor while Janice got chocolate.  Both of them were enticing from their chocolate swirls to the thick ice cream that filled the ice cold glasses. 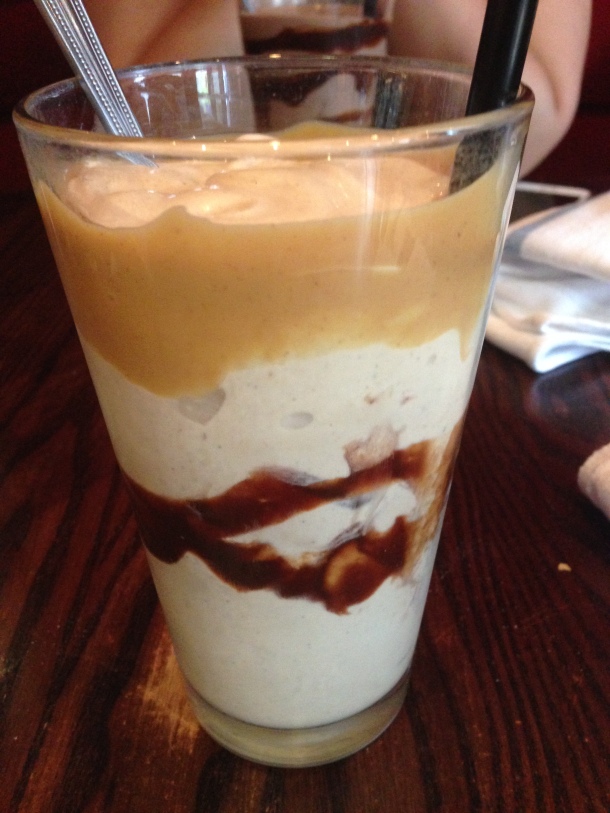 My peanut butter shake was filled with plenty of nutty goodness, and upon tasting Janice’s shake, I felt like Augustus Gloop attempting to swim in Willy Wonka’s chocolate river.  An even better innovation was when we combined our shakes to make our own frozen Reeses peanut butter cups.  It was an all-American meal that red, white, and blue us away.

So if you want some innovative burgers and even better shakes at good prices, hit up DMK Burger Bar!

I'm a food lover who would like to share my many adventures throughout the culinary and geographical world. A good meal or snack can unite people from all walks of life, and new stories can be created from meetings around a table or face to face in a quiet cafe. In this blog, I will share various experiences I've had over the years, and hopefully you'll adventure outside your usual gastronomic choices to try something new and unusual. Bon Appetit, Buen Provecho, and Buon Appetito!
View all posts by Mark T »
← All About My Cheddar
Ribbed For My Pleasure →