Man, what a summer.  Just when I thought it couldn’t get any better with the weather improving and the World Cup around the corner, I finally made it out to Chicago’s famous Ribfest.  While there is another similar festival out in Naperville, the Chicago one apparently is the best in the entire city for the summer.   That really means something since there are ten billion street fests in Chicago for every type of cuisine, ethnicity, and music genre.  Why so many?  Oh, let’s just say when the winter hits Chicago, you don’t want to be anywhere outside, especially this past winter.

Ribfest is typically a three day event complete with music, games, and oh yeah, the food, including an amateur rib eating contest!  Perhaps this video could give you a good idea of what it’s like to be there minus the crushing claustrophobia Janice and I experienced on the wonderful Sunday afternoon we spent there.  We could see rib vendors from all over the Chicagoland area and the USA.  After dodging millions of the food zombies slowly grazing and ripping apart various foodstuffs while shuffling slowly down Lincoln Ave., we ended up at the Mrs. Murphy and Sons Irish Bistro tent.  We had to try it since it has now won best ribs at the fest for the fifth year running.  We got a sampler, and it was absolutely finger-lickin’ good.

The whiskey laden sauce coated every inch of these fall-off-the-bone tender ribs.  The sauce was smoky yet quite sweet, but the only downside was that I felt that there could have been more meat on the bones for the price. 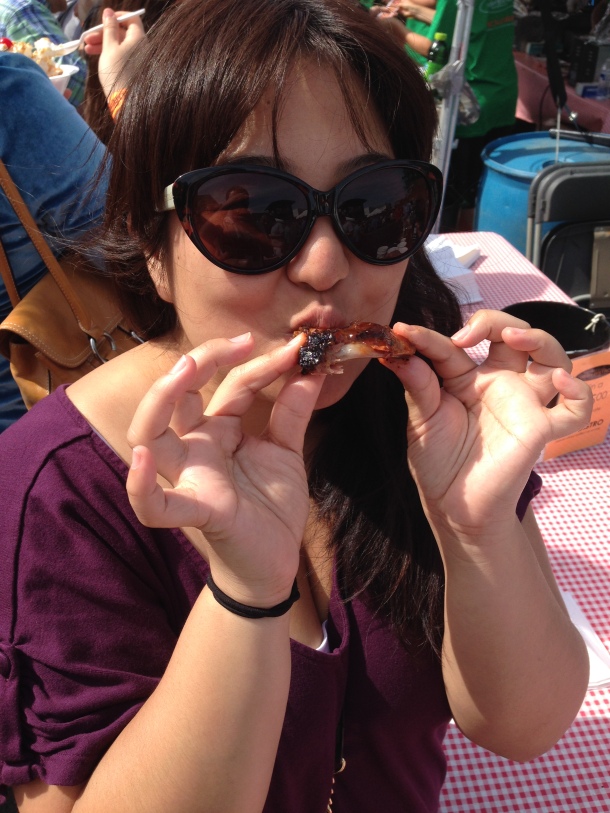 After those tiny but tasty buggers, we moseyed on back to the Texas Thunder BBQ tent because you can’t mess with Texas!

Not only did we splurge for a rib sampler but also a side of the sweet cowboy cornbread.  I was much more satisfied with these bad boys since everything definitely was bigger in Texas.

These Flintstone-sized ribs were more my speed since they had plenty of meat along with a spicier sauce that had hints of cayenne pepper.  Not only that, but the cornbread was the best cornbread I’ve ever had.  Not only was it sweet, but it was moist and spongy which allowed them to soak up some of the bbq sauce to create a spicy and sweet treat.  It was a great day. 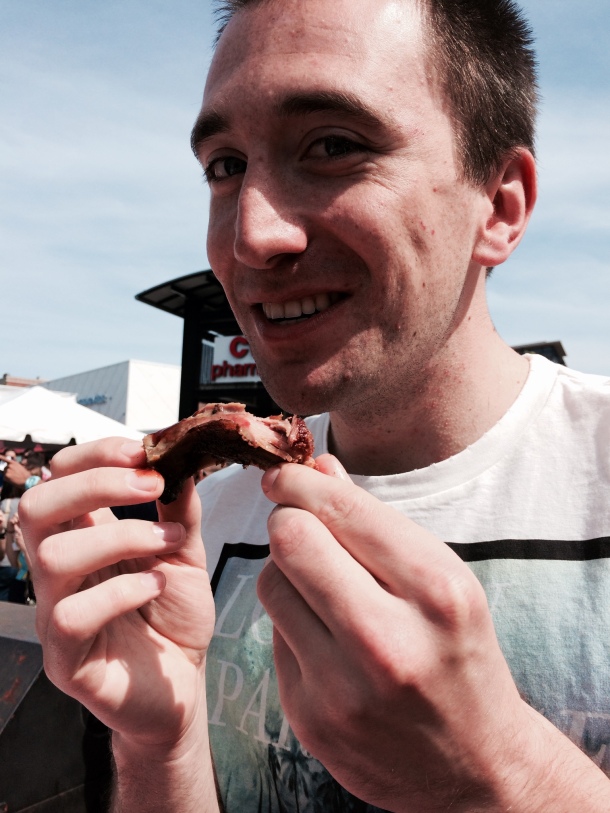 I'm a food lover who would like to share my many adventures throughout the culinary and geographical world. A good meal or snack can unite people from all walks of life, and new stories can be created from meetings around a table or face to face in a quiet cafe. In this blog, I will share various experiences I've had over the years, and hopefully you'll adventure outside your usual gastronomic choices to try something new and unusual. Bon Appetit, Buen Provecho, and Buon Appetito!
View all posts by Mark T »
← That’s a Wrap!
Raising the Bar →