What says summer more than a barbecue?  Burgers, beers, and brats abound as Americans across the country congregate in their backyards around a sizzling grill as our ancestors have done since the beginning of time.  While we’ve gone beyond grunting at each other and digging into fresh hunks of mastodon, the love for grilled meats is still going on strong as I found out at Rocks in Lincoln Park.

The previous night we had spent a good time enjoying some bodacious burgers and brews at George Street Pub, so we ended up at Rock’s since they had some delicious brunch options.  It didn’t strike me as anything novel in terms of decor or concept upon walking into the establishment though.  A high end pub with wood and stone accents that focuses on beer and whiskey…yawn.

Since it was already noon, I was in the mood for something a bit more on the lunch end of things.  They had a fair bit of appetizers, sweet plates, sandwiches, and burgers (including a four pound burger challenge).  Plus, they had a litany of beers along with plenty of whiskeys; hence the name, Rocks, as in the ice cubes.  Continuing in the trend of the weekend, I looked over the burgers and tried to find something new and interesting.  Enter El Gordo or “The Fat” ($10).  I could then choose a side from a mini list of intriguing options, but I went with the Greek fries.

When the burger came out, I was taken aback with how it was presented with all of its toppings bared to the world like a sorority girl at Mardi Gras. 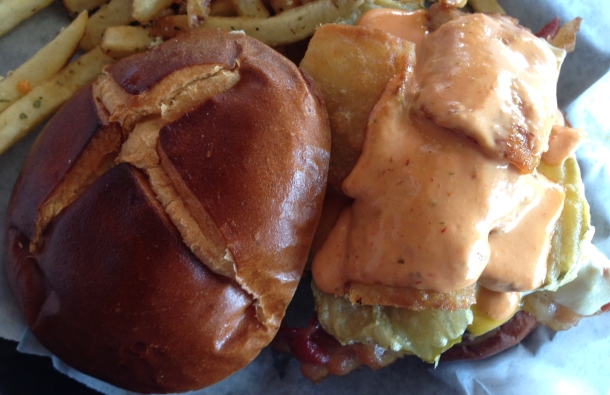 I could see the half pound beef patty topped with pepper jack, cheddar, and provolone, three strips of bacon, pieces of onion rings, deep fried pickles, and a coating of spicy 1,000 island dressing.  I was having the meat sweats just looking at this mountain of a meal, but I put the pretzel top bun on and got ready to rock.

The first bite was quite intense as I cut through the gooey layer of cheese, juicy meat, crispy bacon, and sour layers of fried vegetables.  I personally thought they were gilding the rose though with this burger.

While I’d recommend it to anyone, it seemed like a bit too much was going on in regard to the flavor profile.  The pickles overwhelmed a lot of the flavors including the supposedly spicy 1000 island sauce.  Thankfully, the pretzel bun managed to keep all of the contents between my fingers, and I’ve found the pretzel bun to be the sturdiest variety of bread utilized in burger construction.  Good old fashioned German food engineering at work. What I was more entertained with were the Greek fries.

While they were similar to some taters I’ve tasted in Oregon, they were a Hellenic treat complete with actual chunks of seasoned Feta cheese.  I’m loco about my queso, and these fries fit the bill.  The creamy and crumbly pieces of goat cheese were pungent and transported the oregano coated potatoes to a cut above the rest.

So if you’re looking for another bar that serves ridiculous burgers alongside brunch items with a touch of class, roll on over to Rocks!

I'm a food lover who would like to share my many adventures throughout the culinary and geographical world. A good meal or snack can unite people from all walks of life, and new stories can be created from meetings around a table or face to face in a quiet cafe. In this blog, I will share various experiences I've had over the years, and hopefully you'll adventure outside your usual gastronomic choices to try something new and unusual. Bon Appetit, Buen Provecho, and Buon Appetito!
View all posts by Mark T »
← Something Old, Something New, Something Fried, Something Brewed
The Saint Baby Back Rib Day Massacre →