Sweden.  It is a country with many different faces.  While they are more well known for their vikings, gorgeous women, and a certain incomprehensible Muppet chef, Swedish cuisine in general isn’t very well known or as popular as other European countries’ foods like Italy, France, or Spain.  The reason being, I think, is that Sweden’s food culture reflects the cold and often times harsh environments the various Nordic tribes originally encountered when emigrating to modern day Norway, Sweden, and Denmark.  I mean, the frigid winters aren’t going to cut any slack to a Swedish farmer who wants to emulate his Spanish neighbors by planting an olive farm or attempting to emulate the wine culture of the Mediterranean.  However, that is not to say that Northern European cuisine is worse than the rest of Europe, it just has different ingredients that might not agree with such a wide array of palates.  Historically, the Swedish people have emigrated en masse to America especially to the Northern Midwest region, and today they still have their own little corner of the homeland in Chicago in the Andersonville neighborhood.  You can find plenty of blue and yellow flags flying in front of storefronts, and of course there are diners offering Swedish fare.  Enter Svea’s, an 80 year old diner that is a symbol of the shrinking Swedish community that once was the second largest in the world outside of Stockholm.

Before walking in, the proprietors invoked their links to old Sverige with the three crowns of the royal coat of arms along with a tall ship that could have fit in with King Gustavus Adolphus‘ navy.

After going through their screen door, I was greeted with a small but cozy diner.

Surprisingly, it wasn’t too busy in the morning for breakfast, so I got to sit wherever I wanted. 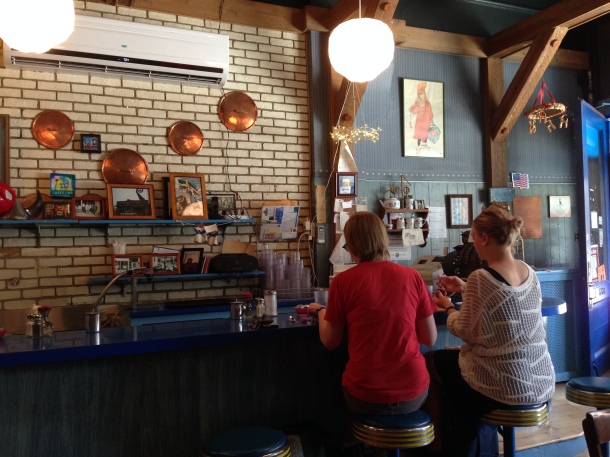 All around I could see little Swedish knicknacks and artifacts like horned viking helmets, a “God jul” or “Merry Christmas” sign on the kitchen, and a horse patterned table cloth that took me back to when I visited Stockholm. 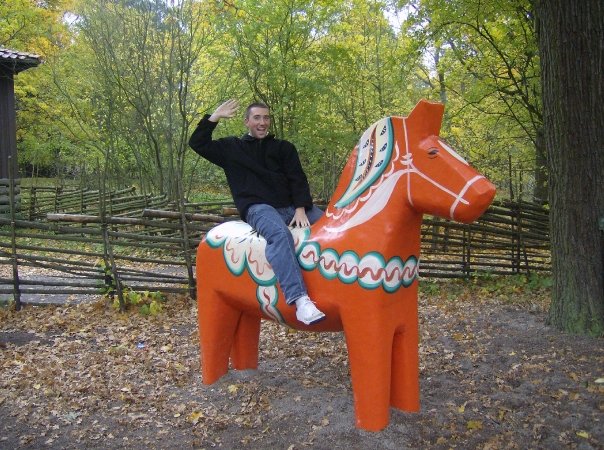 A typical day in Stockholm

I looked over the menu with the left side sporting more American selections like omelets and bagels, but then there were Swedish options like smorgasar (open face sandwiches), the famed “Viking” breakfast, and my choice:  Swedish pancakes with imported lingonberry sauce ($6) with a side of salt pork ($3).  The prices overall ranged anywhere from $5-$10 which is a bargain compared to other brunch places in the area.  There are dinner options as well that have the same American/Swedish split, but I’ll have to leave that for another day.  My cakes made their appearance soon thereafter and looked perfect.

Portion-wise, they were quite large.  I found them to be between a ‘Murikan pancake and a French crepe in terms of thickness.  Amid the sprinklings of powdered sugar, the salt pork was placed atop the pockmarked surface and strangely looked like two of the rosy horses on the table sharing a smooch.  Budding food romances aside, I placed it aside for later.  I focused first on smearing the small container of lingonberry jelly all over these wonderful pancakes and quickly tucked in since I was starving.  However, I think they could have given me a bit more jelly to actually cover both pieces instead of just one.

It was a simple but very well done meal.  The pancakes were substantial yet light on the stomach.  It didn’t feel like I had swallowed a bowling ball by the end of breakfast.  As for the jelly, it was sweet yet more on the tart side which gave the blander pancakes a potent punch with every forkful.  I then turned my full attention toward the salt pork.

I used some of the maple syrup on the side for dipping, but I could only liken the meat to a super thin and crunchy version of bacon.  It wasn’t unbearably salty and only got better with some of the gooey, sweet syrup on top.

As I went to settle the check at the front, I noticed their sign on the cash register that said, “CASH ONLY”.  In this era of credit cards, it seems a bit archaic, but luckily I’m a man of the past.  I paid for my reasonably priced and lip-smacking good breakfast that was like Ikea furniture:  cheap, functional, simple, pleasing to the eye, but way more delicious.  I highly recommend visiting Svea’s to experience an unraveling ethnic patch of Chicago’s cultural quilt.

I'm a food lover who would like to share my many adventures throughout the culinary and geographical world. A good meal or snack can unite people from all walks of life, and new stories can be created from meetings around a table or face to face in a quiet cafe. In this blog, I will share various experiences I've had over the years, and hopefully you'll adventure outside your usual gastronomic choices to try something new and unusual. Bon Appetit, Buen Provecho, and Buon Appetito!
View all posts by Mark T »
← Best of Mastication Monologues (200 Post Anniversary)
Pole Position →