Bearing the Grunt of Good Food

Welcome to the 220th post on Mastication Monologues!  It has been quite a trip, but what better way to celebrate another small milestone than going to the first ever Lettuce Entertain You restaurant:  R.J. Grunts.  It still is as funky as it was back in the 1970s, and the food is as unpretentious as their self-deprecating menu humor.

This food adventure was prefaced by an enchanting time at the zoo with my girlfriend Janice at the Lincoln Park Zoo’s Adult Night.  After enjoying seeing the animals chilling at night in their habitats sans shrieking urchins scurrying about, we stumbled upon the mythical establishment. 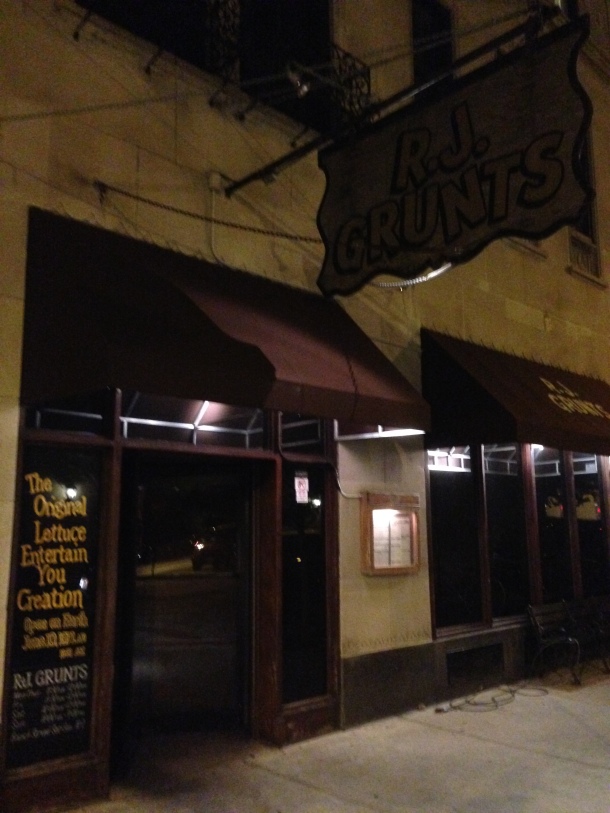 We walked in on a Saturday night, and it was packed.  However, we were able to get a table for two right away.  We walked past happy, chatting diners along with an epic salad bar that seemed to have every condiment under the sun along with some interesting sides like various neon colored Jellos. 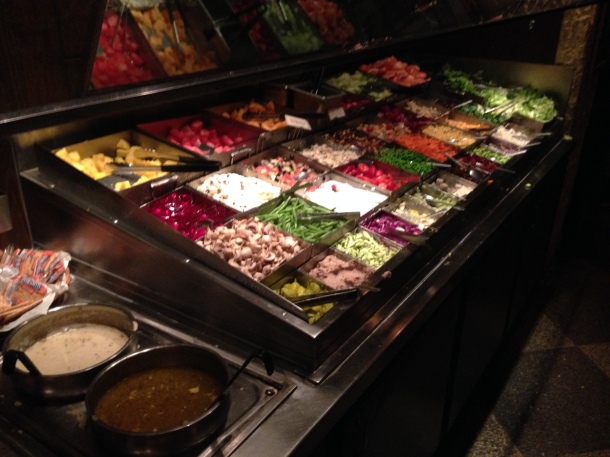 When we sat down, I surveyed the walls that were coated with pictures of random people who I never really found out who they were.  However, the menu was a work of art, and it was gigantic as shown by my semi-hidden boo. 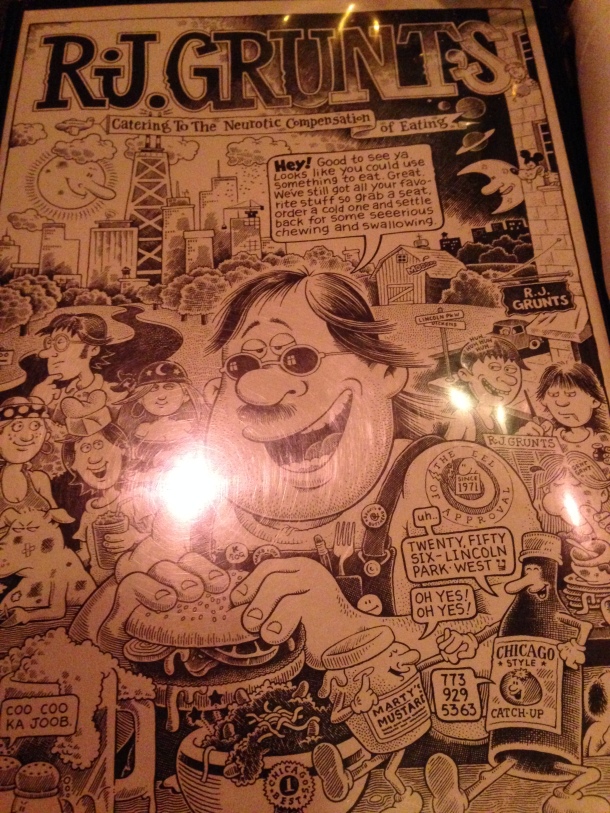 Hide and Seek at our own table

Not only was it hulking in terms of size, but also food and drink options.  One of the most interesting items on the menu was the temperature soup.  What it consists of is the soup of the day that costs the same temperature based on what it says on the lakeside thermometer, i.e. if it’s 32 degrees, you pay $0.32 for your soup.  It can be added to your entree with the following three conditions:  1.  The salad bar doesn’t come with it, 2.  They won’t pay you if it’s -0 F, and 3.  It’s only valid with purchase of an entree.  While it was intriguing, I was much hungrier and looking for something more substantial.  Thus, I came to the burger part of the menu.  After looking it over, I decided to get the Yowza Burger (a common phrase used as an exclamation of excitement during the 70s like in Happy Days) for $12.95 and a hand-dipped creamy caramel shake ($6).  Janice got the Grunt Burger ($11.95) but no shake.  They came out after a bit, and they didn’t look spectacular. 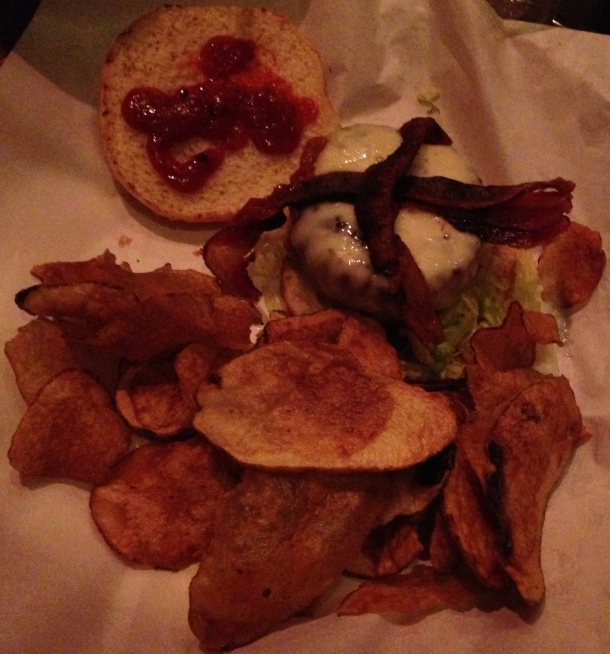 However, I made the mistake of judging a burger by its bun. It was stacked with enough spicy things to make someone yell its name, but with someone who has dead tastebuds after years of heat challenges, it wouldn’t trouble many chiliheads.

Normal people, maybe.  I really liked the pepper jack, spicy ketchup, and peppercorns that were coating the burger.  It was different kinds of spice that activated different parts of the palate along with the crunch from the smoked bacon and occasional peppercorn lodged in the juicy patty.  I personally preferred my girlfriend’s Grunt burger because there were a ton of fried onion strings and crumbly/melted blue cheese chunks on the Angus patty. 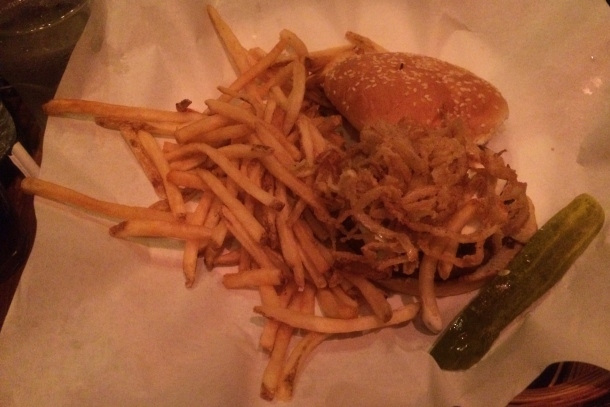 Two great, strong flavors and differing textures that would make me happy but sorely needing a breath mint by the end of the meal.  Then there were the fries that were more like potato chips but not really.  I really enjoyed them since they were unique, exquisitely fried, and were just the right amount of crispy leaning more toward the softer end of things.  The piece de resistance was the  milkshake I had there. 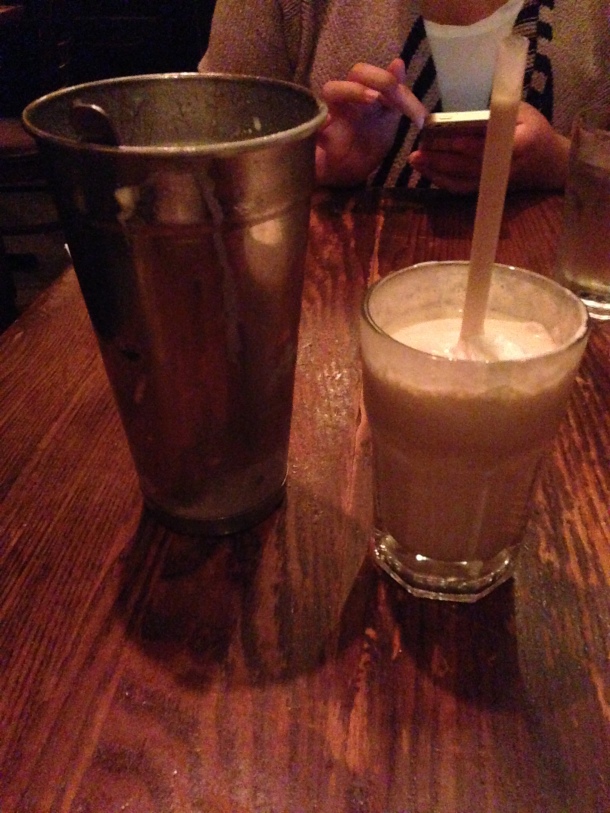 I’ve had my fair share of ice cream treats, both good and disgusting, but this was one of my top three milk shakes I’ve ever tried.  The butterfat of the ice cream mixing with the rich milk and sweet caramel created a cool ambrosia that washed over my palate with wave upon wave of dulcet notes that made me happy until there was none left.  I had no shame when taking it down in public like a sweet fiend.  It was a creative, classic all American meal for a fun date night.

So if you’re looking for a restaurant with plenty of history, character, innovative dishes, and moderate prices, look no further than the blast from the past, R.J. Grunts.  Dy-no-mite!!

I'm a food lover who would like to share my many adventures throughout the culinary and geographical world. A good meal or snack can unite people from all walks of life, and new stories can be created from meetings around a table or face to face in a quiet cafe. In this blog, I will share various experiences I've had over the years, and hopefully you'll adventure outside your usual gastronomic choices to try something new and unusual. Bon Appetit, Buen Provecho, and Buon Appetito!
View all posts by Mark T »
← Food Convention Post: Taste Talks in Chicago
Little Bucharest: All the Meat That’s Fit to Eat! →