Merry Christmas and happy holiday season to everyone out there in cyberspace!  I hope this post finds you well, and you have been enjoying plenty of delicious dishes at some rockin’ parties.  Today begins the recounting of our (Janice and I) adventure to Costa Rica.  Why Costa Rica you might ask?  Well, it was the same price as a ticket to Texas, and we wanted some place warm.  So, why not go to a place that is a bit more exotic and less like King of the Hill? Then there is the question as to what exactly Costa Rica offers over more popular Latin American destinations like Brazil or Argentina or Mexico?  Easy.  A country that is an anomaly in the region in the sense of being a more European enclave surrounded by more indigenous/mestizo nations.  A country that has not had a standing army since 1948.  A country with the largest sloth sanctuary in the world (more to come on this particular Costa Rican highlight).  Another fun fact is that our trip to the land of Pura Vida is that it was one of my best vacations ever thanks to my lovely travel partner and delicious food that we sampled all over the country.  Day one takes us to a local favorite in San Jose, the capital city.

When we landed in the country, we were greeted with sun, smiles, and warm weather.  Coming from typically frigid Chicago, I could only turn to Janice, chuckle, and say, “This is December”.  This became a common refrain when we witnessed something absolutely beautiful that would be instead frozen solid or coated in a sludge of melted snow if it was up north in Chi-town.  While being driven from the airport to our condo, we talked with the driver, Rigoberto, about what would be a good, local place to grab dinner.  He recommended La Princesa Marina (The Marine Princess), and soon thereafter, our condo owner also confirmed that it would be a perfect way to kick off our vacation.

We caught a ride with the condo owner, and eventually arrived at the door. 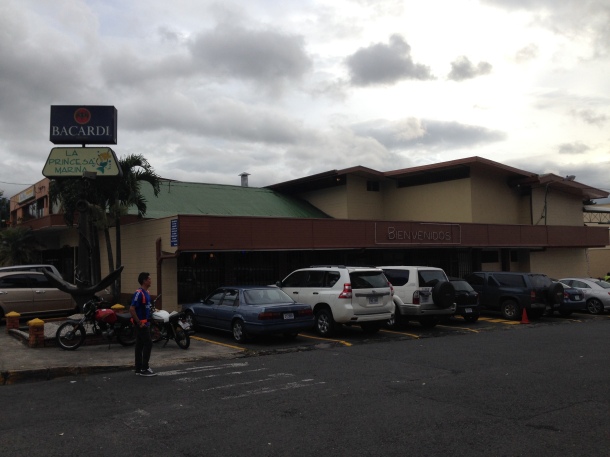 I couldn’t give you directions there since Costa Rican street names aren’t the best, and most locals rely on landmarks to show you the way.  Ergo, the biggest thing by the establishment is the Estadio Nacional de Costa Rica shown below (the national soccer stadium build by the Chinese curiously enough).

It was moderately packed when we walked into the place since local soccer club, Saprissa, was getting ready to play the final game of the season against neighboring Heredia. 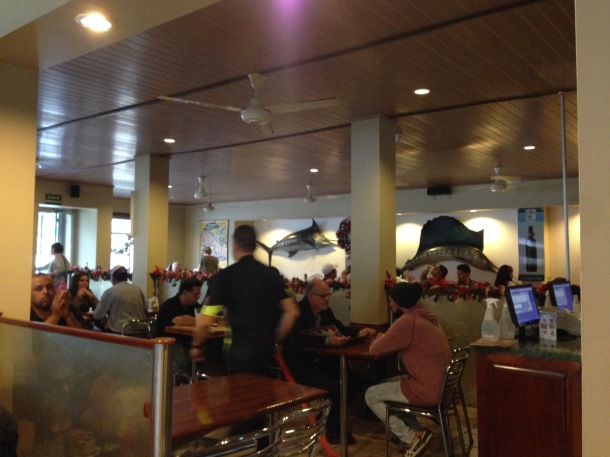 Apparently this is one of the big, rowdy hangouts when the big matches happen.  Luckily, we came there way before kickoff, so we weren’t caught up in any type of hubbub.

Most of the staff were rocking their Saprissa jerseys though.  Janice and I just had our game faces on as we were looking over their giant menus that were in both English and Spanish, and there were two columns of prices that indicated the price before and after tax.  I never saw that anywhere else in the world.  Obviously, La Princesa Marina is a seafood place, and Costa Rica is known for their amazing frutas del mar.  Naturally, we kicked it off with two different types of ceviche, camaron con aguacate (shrimp with avocado; 3,690 colones/$6.80) and corvina con aguacate (sea bass which is a local specialty with avocado; 3,320 colones/$6).  NOTE:  They accept both Colones and USD in Costa Rica in most places, but the exchange rate is really messy when trying to convert between the two which made it difficult for us to determine what was a good or bad deal.  They say use USD, but I’d recommend using Colones because it’s less of a headache. 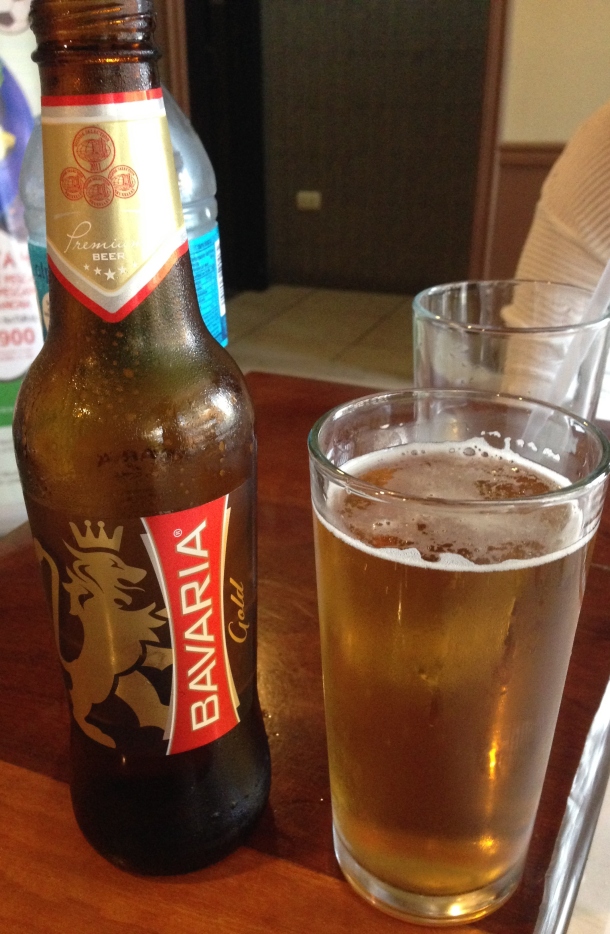 It was a pilsner that was slightly bitter and had hoppy notes, but it was pretty watery overall.

When they all came out, I was pleasantly surprised.  Now, I’m not a big fish guy beyond shrimp and tuna fish sandwiches, but this ceviche really won me over.  Ceviche has a colorful history that stretches back over 2,000 years in Peru (originally called siwichi in Quechua) that was first invented by Inca populations that then adopted the citrus fruits like oranges, limes, and lemons that the Spanish explorers brought with them compliments of their former Moorish overlords.  The dish basically hasn’t changed since then since it still consists of raw fish that is “cooked” by the citric acid from the aforementioned fruits, in this case lemon and lime.  However, it was a bit different than Mexican ceviche I’ve tried that had tortilla chips on the side instead of the saltines the Costa Ricans preferred.  Plus, it had a lot more liquid in it which was similar to an Ecuadorian variety I sampled at a family friend’s party.  Either way, I sampled both and liked the shrimp ceviche better. 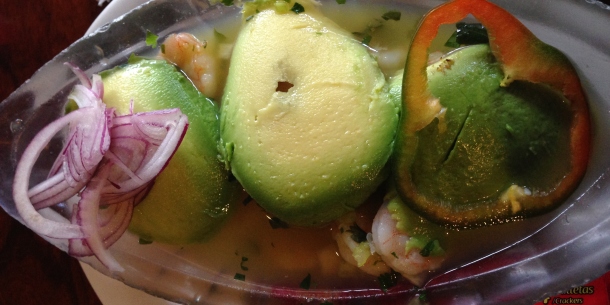 I found the corvina to be good, pure white sea bass, but it didn’t have the chewier texture that the shrimp brought to the table.

For both, I loved the combination of smooth avocado with the onions, cilantro, and tangy citrus juices that I kicked up a notch with a trusty local hot sauce that I could liken to a kind of Tabasco.

I wasn’t a huge fan of the saltines as a means of transporting the tasty ceviche from bowl to mouth due to the crumbliness of the cracker, so I guess I enjoy the Mexican ceviche more in that aspect.  Once we were almost done with our ceviches, our main plates came out.

First, there was my arroz de la casa (rice of the house; ₡ 4,180/$7.75) which was a ton of cooked rice that was seasoned and filled with shrimp, pork, chicken, and a mix of vegetables.

It was similar to the rice side dish found in almost every Mexican restaurant in terms of the orange hue, slightly buttery flavor, and corn and peas lurking amongst the grains, but the meat really jazzed up this side dish to make it one of the highlights of the meal.  My lomo en salsa jalapeña (sirloin in jalapeño pepper sauce;₡ 5,535/$10) was also fantastic.

The steak was seared to perfection, and the spicy sauce was filled with onions, peppers, and extra spicy jalapeño slices.  Not only did I have the huge slab of meat in front of me, but there was a cup of fried plantains, plain white rice, and black beans on the side. 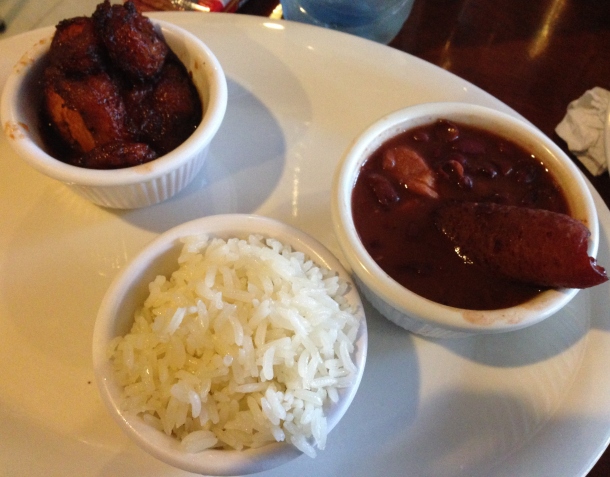 I ignored the rice, but the fried plantains were wonderful since they tasted like a mix of caramel and bananas.  As for the black beans, they were interesting since there literally was a piece of pork sticking out of the ebony muck like the sinking Titanic.  However, this doomed piece of pork imparted its flavor to the beans that were scrumptious, and soon thereafter had a one way ticket to my stomach.  Then there was Janice’s mixed plate of shrimp, fish filets, and octopus (plato surtido de camaron, filet, y pulpo; ₡ 7,380/$13). 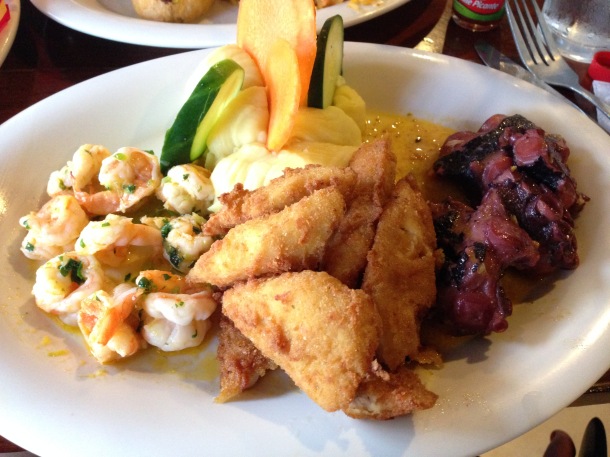 Even with the wonderful seafood in the ceviche, Janice was quite disappointed with this mixed plate, and she loves seafood which is saying something.  It looked like the shrimp were cooked and marinated in some type of butter/olive oil sauce with herbs, but I didn’t try them or the fish filets. 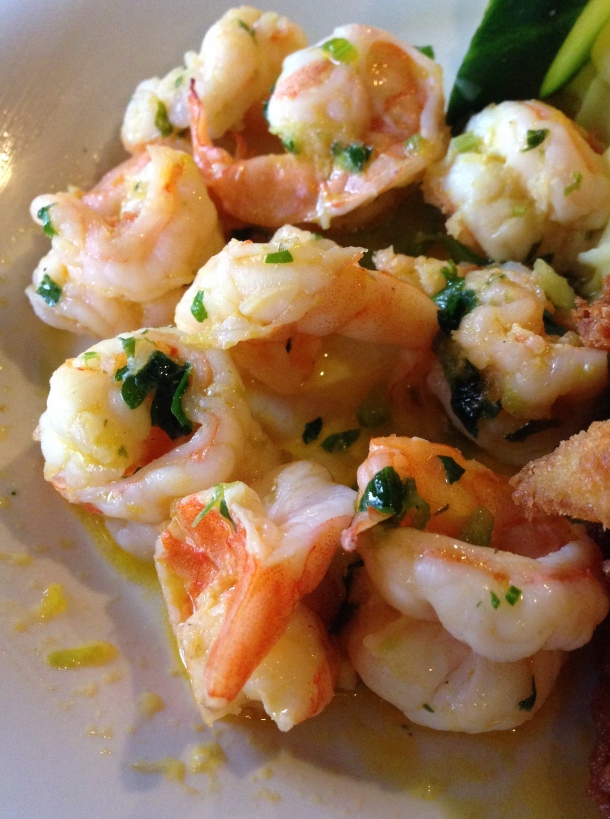 The filets just looked like fried pieces of corvina, so I’m sure they weren’t anything special. 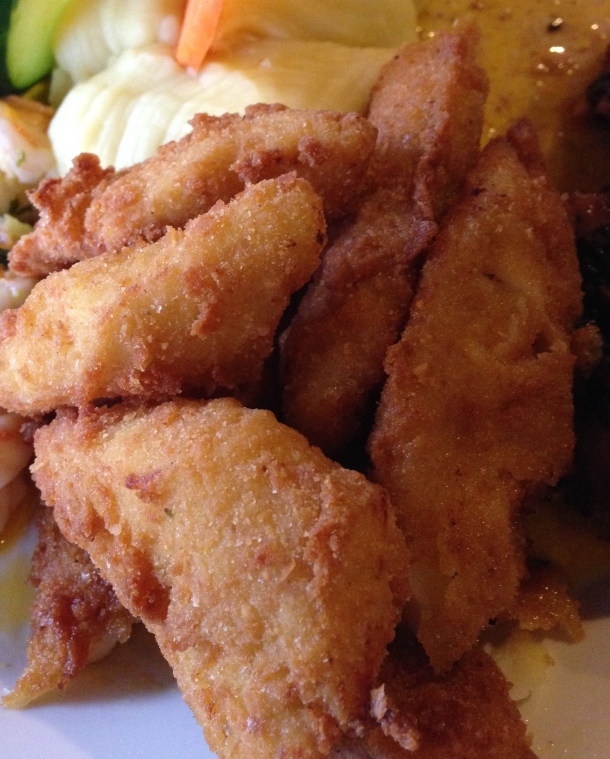 As for the octopus, if they were cut in slightly smaller pieces with a pinch of paprika, I would say it was just as good as the pulpo gallego I had in Santiago de Compostela in Spain.

It was so fresh that the suction cups still would stick to the plate, and it was neither too chewy nor too soggy.  Definitely the king of this sea platter.

When it came time to pay, I found out that I had go up to a cashier window that looked more at home in a liquor store than a restaurant since it had bars on the window and a small opening where receipts and money were exchanged.  While paying, this was where I first found out how screwy the currency was since our bill came out to roughly $50 bucks.  I paid in USD, and I got Colones back and mixed change, i.e. there were 100 colon coins, 500 colon coins, and then some nickles thrown in there for fun.  Seriously?  Nickles?  Either way, La Princesa Marina was a filling and satisfying way to kick off our vacation, and got us ready for the adventures to come.

I'm a food lover who would like to share my many adventures throughout the culinary and geographical world. A good meal or snack can unite people from all walks of life, and new stories can be created from meetings around a table or face to face in a quiet cafe. In this blog, I will share various experiences I've had over the years, and hopefully you'll adventure outside your usual gastronomic choices to try something new and unusual. Bon Appetit, Buen Provecho, and Buon Appetito!
View all posts by Mark T »
← The Sooper Gift of Gab
Costa Rica (Day 2)- Cruisin’ For Brews, Beans, and Bites →