Well, it has finally come to this.  The end of our Costa Rican adventure.  It was a wonderful time, and in this post I plan on covering the final two days of our Central American trek.

Our penultimate day kicked off with another super delicious, home-made breakfast that consisted of a quarter of a watermelon, bakery from the night before, and some interesting fruit juice.

First, there was the juice.  When walking through the supermarket the night before, I found this juice of the cas fruit.  Before running into it, the first thing I would have thought of when I heard the word “cas” would be of a terrible Korean beer, but this discovery was worlds apart.

Turns out the cas fruit is a variety of guava grown in Costa Rica, and the juice was a bit more sour than sweet.  It had elements of pear, apple, lime, and orange to be a refreshing glass of juice.  Then there were the pastries. *Cue drooling*.  First, there was my dulce de leche roll that basically was a cinnamon roll with the frosting replaced with that sweet sweet caramel.

It was soft, filled with cinnamon, and super decadent.

My only regret was not microwaving it when I had the chance to get that “fresh-out-of-the-oven” taste and feel. 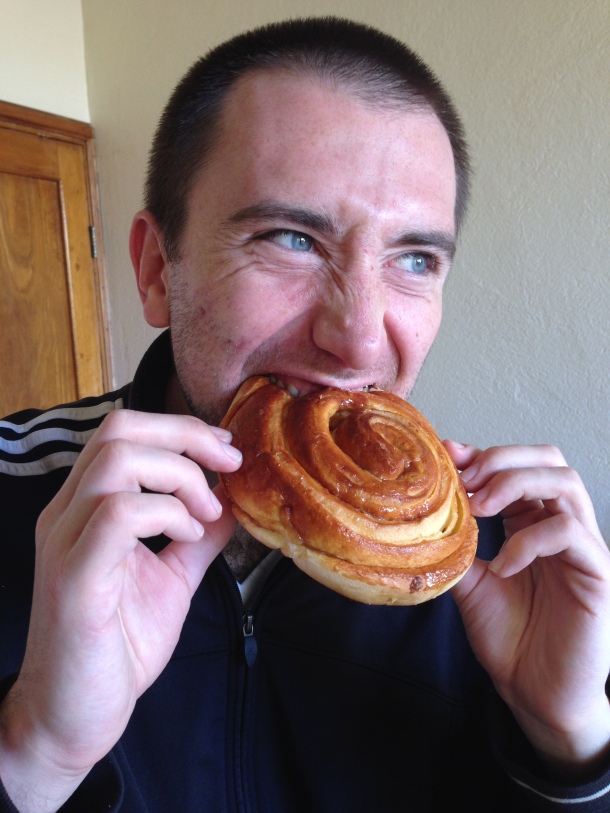 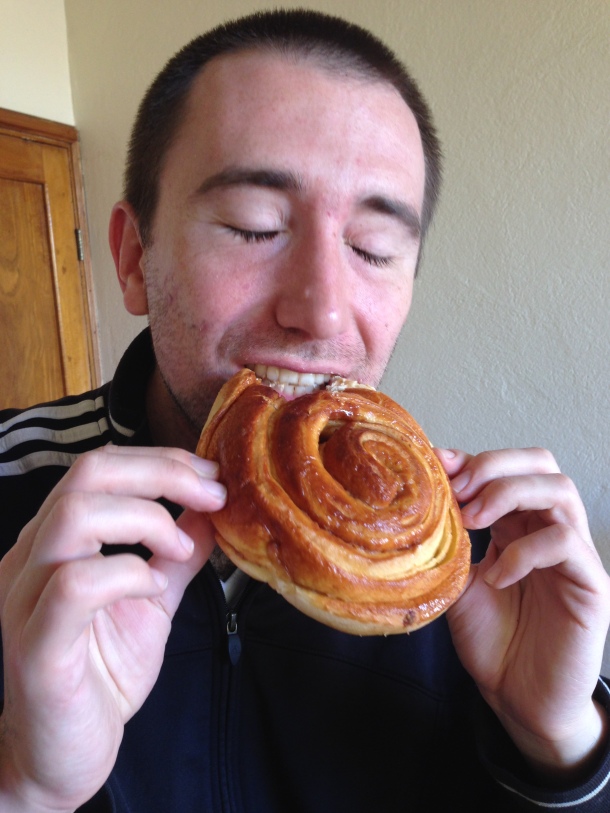 What kind of threw me for a loop was that the Costa Ricans called this a pupusa when I was more acquainted with a more savory and tortilla based variety from El Salvador.

Plus, it was stuffed with a savory cheese that wouldn’t have worked too well without the sugary crust that spanned from stern to bow.

It was a great contrast that left me pleasantly satiated by the end of our breakfast.  These treats were a prelude to our trip to the Poas Volcano.  It was an extremely clear day which was great for us since we were able to see the entire volcano crater complete with the aromatic smell of sulphur dioxide in the air.  How romantic!

After sauntering back down the side of the smouldering mountain, we loaded into the mini-bus to go to the waterfall garden.  However, before we arrived there, we stopped at a roadside store that specialized in strawberries.  In Costa Rica, the land of abundant wildlife and produce, what is grown is dependent on the altitude and climate.  So, in addition to those two factors, the volcanic soil proved to be the ideal environment for growing the sweet fruits. 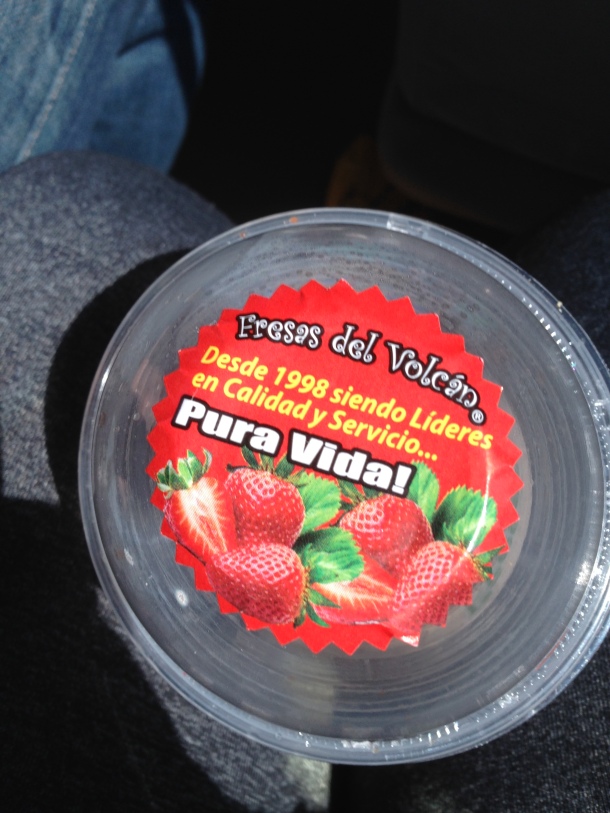 I tried some from Janice’s purchase and other fellow passengers’ cups, but they didn’t taste any different than the ones from back home.  We arrived at the La Paz animal sanctuary and waterfall garden which was a menagerie of some truly unique flora and fauna specimens like parrots that could sound like crying babies and treasure beetles that looked like they were dipped in precious metals.  Before going to see the waterfalls, we got free samples of a coconut pudding similar to one Janice bought when we were in Sarchi along with a cube of very bland cheese.

The coolest part of the waterfall garden was the magia blanca (“white magic” in Spanish) cataract whose name derives from the optical illusion achieved by staring at the middle of the falls for roughly 20 seconds.

Then, we moved our eyes to the right to see the cliff moving upward against the water.  After we finished with this adventure through the mountains, we went for lunch at another strawberry market and restaurant.  The steak was good but nothing noteworthy.  Janice’s beef stew was a lot tastier since each piece was melting in my mouth. 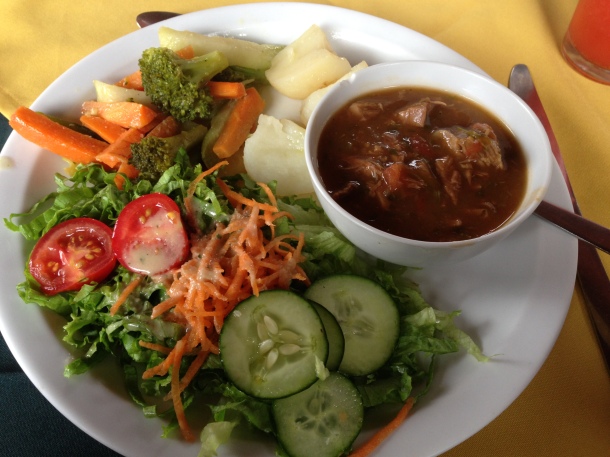 The strawberry smoothie was a lot better than their intact brethren since it was sweeter due to probable added sugar.

We peaced out of there to get to San Jose, and at night our entire tour group met up for one last meal together.  Our guide, Christian, swore by this place, La Cascada Steakhouse, as one of the best eateries in San Jose.

Fitting that it was also named after a waterfall in Spanish.  It looked moderately more fancy compared to the soda diners we hit up in days past. 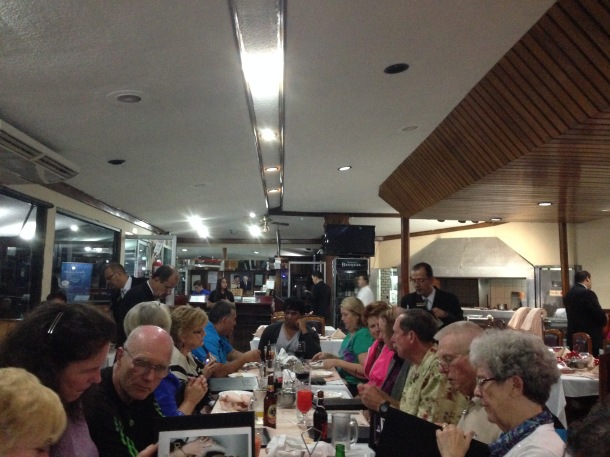 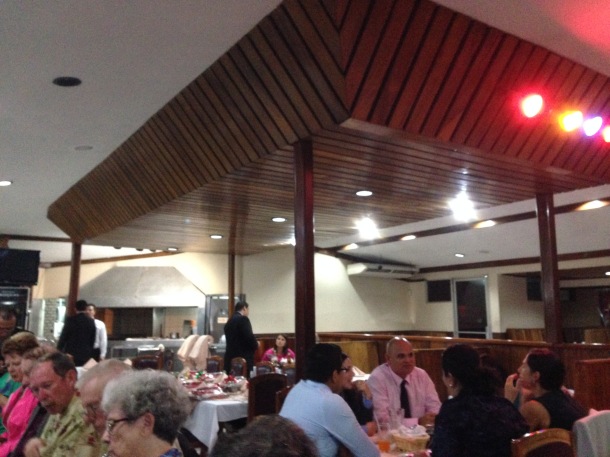 I started the night off with a Pilsen beer that was to a T exactly what the name suggested:  a disappointing pilsner style brew.

On the table, there was a bread and tortilla basket complimented with three different sauces along with butter.  I was a personal fan of the spicy ketchup mix combined with the garlic-laden Chimichurri sauce.

I ordered the Cascada house special, and Janice got the Tierra y Mar (“Surf and turf” basically in Spanish).  While waiting for our food, I decided to get a pic of the grill when one of the servers initiated a conversation with me in Spanish.  I explained to him that I wrote a food blog, so he gave me the lowdown about the grill.  Apparently what sets this steakhouse apart from others was that the grill was that it was coal fueled as opposed to the wood or gas varieties.

This showed in the food when our meals came out.  My steak was expertly grilled and super juicy with a smoky flavor.

Janice’s shrimp and steak combined were super decadent while the side of potato, black beans, and fried plantains were ok.

Surprisingly, we had room for dessert.  I got the apple pie a la mode, and the Tico take on this slice of ‘Murika was pretty damn tasty, especially the carmelized sugar goblet holding the delicious vanilla ice cream. 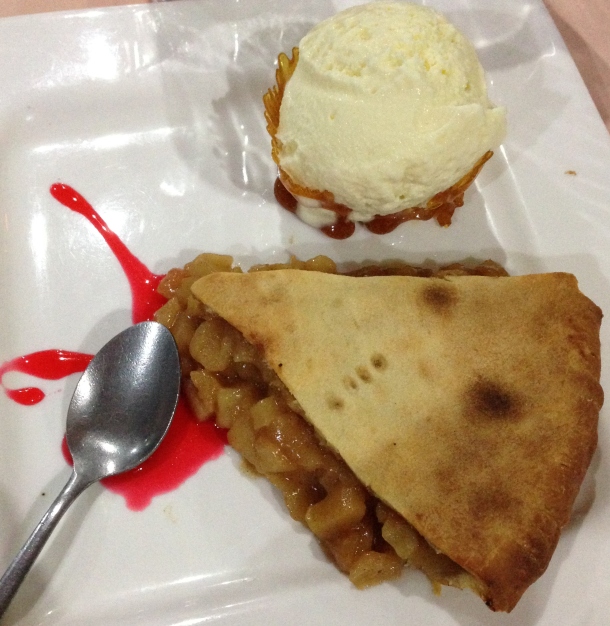 I loved Janice’s coconut flan that was more bread pudding-esque than the jigglier versions I’ve tried before. 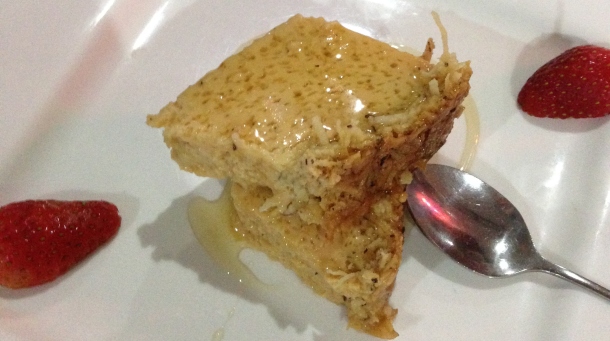 One of our fellow travelers ordered the tres leches (“three milks” in Spanish) cake that was rich yet simple with a creamy topping and vanilla undertones.

It was a bittersweet sign that our time together was coming to a close.

Some of the people in our group.

The final full day consisted of our ziplining adventure throughout the San Lorenzo canopy which was absolutely exhilarating and ended our trip on literally a high note. 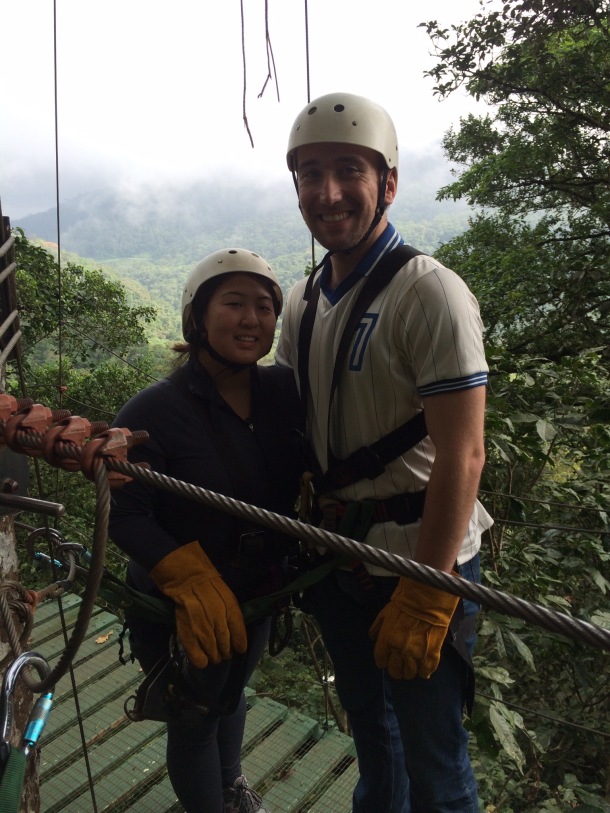 Before becoming airborn, we had some deliciously sweet vanilla pudding puffs for breakfast from the same bakery in downtown San Jose where we got the dulce de leche roll. 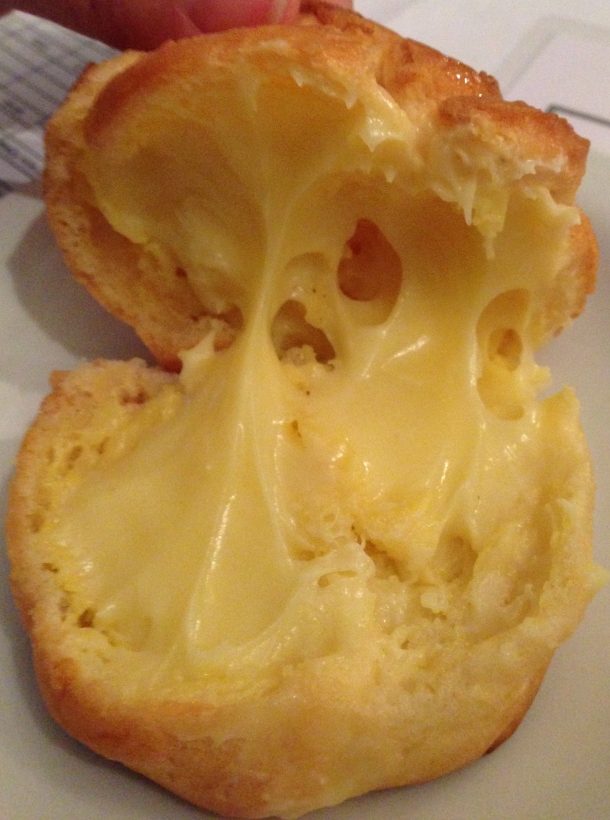 After flying through the jungle and over mountains at speeds reaching 50-60 mph (96.5 kph), that worked our appetites up.  So, we hit up the sangria bar at the Best Western down the street.  We kept it simple with a margarita pizza which I guess translates to a regular cheese pizza in Costa Rica.  My dark Bavaria beer was like any of the other beers I had in Costa Rica:  disappointing with minimal taste.

So much for having a full bodied beer on vacation.   The chocolate mousse dessert was a tantalizing dessert that went well with our sweet sangria to top off the night and our journey.

It was hard to say goodbye to the friends that we made along the way, and the wonderful country we explored for that week.  However, reality set in as we passed the marimba players at the airport playing the Chicken Dance, and we walked up to security to return home to freezing Chicago.  It was a perfect vacation, and we stayed classy all the way to the end.   We wouldn’t have done it any other way.

I'm a food lover who would like to share my many adventures throughout the culinary and geographical world. A good meal or snack can unite people from all walks of life, and new stories can be created from meetings around a table or face to face in a quiet cafe. In this blog, I will share various experiences I've had over the years, and hopefully you'll adventure outside your usual gastronomic choices to try something new and unusual. Bon Appetit, Buen Provecho, and Buon Appetito!
View all posts by Mark T »
← Costa Rica (Day 5)- Sloth Sanctuary = BOO-YA, Grandma!
At the Market With My Dawgs →