A View to a Grill

Welcome one and all to another great post on Mastication Monologues!  Today’s post focuses on cuisine that might not get the spotlight like other, more mainstream types of food like Chinese food or Mexican food, but that doesn’t mean that it is of lesser quality.  In this case, I’m talking about Syrian cuisine.  It is part of the Levant on the far eastern side of the Mediterranean Sea, its food shares roots with neighbors Turkey, Lebanon, Palestine, and even as far as Iraq.  Unfortunately, the ongoing civil war has colored everyone’s thoughts about this country, but I would like to show you that there is more to Syria than the seemingly eternal struggle between Assad and the plethora of Islamic militias that shift alliances as much as the Syrian desert sands.  I had my first taste of Syrian food at Pita Pita Mediterranean (formerly Pita Pit).

It’s just another storefront in another stripmall in the northern Chicago suburbs, but the food inside is like the lamp in the Disney movie Aladdin:  relatively unknown to the world unless you help Jafar with both halves of the golden scarab.  Actually, it’s not as dramatic as that given that a quick Google Maps could sort you out in a snap, but there definitely is treasure to be found when looking over their menu.  I saw typical Middle Eastern/Mediterranean fare like kebab, hummus, and Jerusalem salad, but then there were other choices I’ve never heard of.  Naturally, I gravitated toward these options.  I started off with sampling their babha ghanouj ($3 small/$5 large) and the muthawama ($3 small/$5 large).

Babha ghanouj (بابا غنوج) literally means “pampered papa” in reference to most likely the head of a harem, and these flavors were definitely made for royalty.  It consists of grilled and pureed eggplant that is then mixed with sesame seeds, lemon juice, garlic, and yogurt.  It was also topped with a dollop of olive oil for good measure.  I found this cold spread to be both savory yet slightly tart that went very well with the light pita triangles that came with the dip.  I was more partial to the muthawama.  It was very similar to the babha ghanouj in terms of ingredients aside from replacing the eggplant with potatoes.  I think this switch made the white condiment feel more like sour cream and taste like a garlic aioli which goes great on any type of carb, be it pita or French fry.  As for my main dish, I passed over the tried and true favorites in my mind and took a dive into the great unknown with the mnazeleh ($10).  When it came out, I didn’t know what to think. 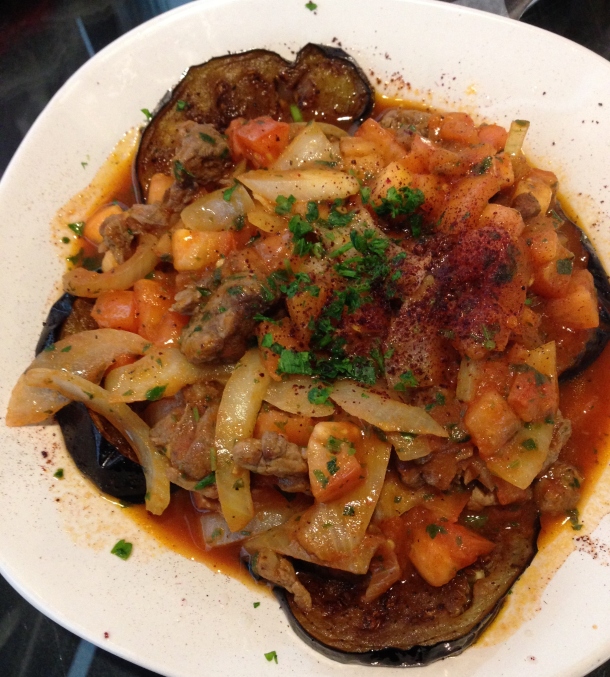 It wasn’t as sexy as the spreads I had before, but it looked more like an over spiced pile of onions and tomatoes.  The colors weren’t as bright either.  However, I made the mistake of judging a book by its cover.  It came with a more vibrant, complimentary side of rice that was moist and lightly seasoned that I subsequently folded into the main meal. 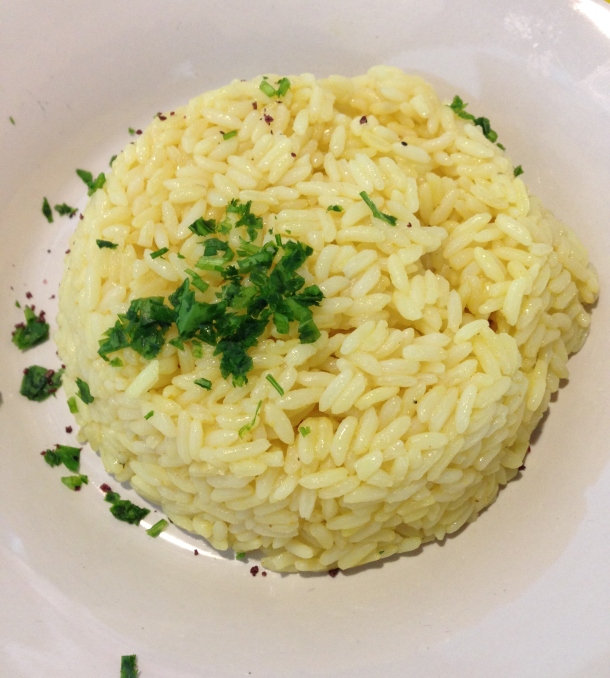 What I ended up experiencing was one of the best Middle Eastern dishes I’ve eaten.  The eggplant base that upheld the tomato, onion, and beef hodgepodge was super tender to the point of disintegrating faster than Subway’s ties with Jared and was infused with the beefy goodness residing above.  The addition of the rice gave it a lot more body, and I would suggest changing the recipe to include the rice.  I recommend this plate if you’re looking for something uniquely Syrian and full of flavor.  By the end of my meal, I thought I couldn’t fit anymore, but I had to try their baklava ($2.80).  This dessert’s history is as multilayered as its filo dough.  Different countries throughout the eastern Mediterranean claim it as their own invention, but there is no definitive answer for a dessert that is as old as time.  Some scholars believe it comes from the Mongols since it might derive from the root “bayla-” meaning “to pile up”, but the “-va” ending suggests a Persian origin.  The oldest recipe, dating back to the second century B.C., of anything resembling this sweet treat is the Roman placenta cake.  You might be thinking, “Ugh!  They made cake out of placenta?!!!  Vomitrocious!”  Au contraire, mon frere.  The word “placenta” derives from the Greek word “plakous” which related to layered breads and was then transferred into Latin as “placenta” as a word meaning “cake”.  However, the Roman version had cheese, honey, and bay leaves between each layer or “tracta” instead of the nuts we use now.  The modern version of baklava is thought to have derived from Istanbul during the reign of the Ottomans where the sultan would present his elite guard, the Janissaries, with trays of baklava on the 15th day of Ramadan in a procession complete with pomp and circumstance.  At Pita Pita Grill, I was neither a Christian mercenary nor served with any great ceremony.

The baklava was dripping with honey with every forkful, but I think it was a bit too thick for its own good.  It had plenty of chopped nuts throughout the flaky dough layers, but it made it extremely frustrating to cut with a fork.  I’d prefer if it was served in smaller, easier to eat squares.  I did get a ton of baklava for the price though, and I recommend it to anyone.  Just be prepared to use some elbow grease to keep it on the plate.

So, if you’re looking for a “diamond in the rough” restaurant that is no frills in terms of presentation, go to Pita Pita Grill and discover a whole new world of delicious, Syrian food!

I'm a food lover who would like to share my many adventures throughout the culinary and geographical world. A good meal or snack can unite people from all walks of life, and new stories can be created from meetings around a table or face to face in a quiet cafe. In this blog, I will share various experiences I've had over the years, and hopefully you'll adventure outside your usual gastronomic choices to try something new and unusual. Bon Appetit, Buen Provecho, and Buon Appetito!
View all posts by Mark T »
← Do the Deaux
It’s Greek to Me →