As if day three in London couldn’t get any wilder, day four was extra crazy as my friends and I went off to have dinner at an Italian eatery called Bunga Bunga.  It’s located in the Battersea area of London which is just south of the Thames nearby the posh Chelsea neighborhood.  It was a dining experience unlike any other I’ve had in my life, so I hope this installation of Mastication Monologues can adequately describe the madness that is Bunga Bunga.  I’ll also cover my pre-match meal before seeing Tottenham Hotspur play in north London later on in this post.

So, Bunga Bunga.  If you aren’t up on your geo-political happenings or history in general, politicians are known as getting things done, both good and bad.  In Italy, there is a man named Silvio Berlusconi (former prime minister of Italy) who is one part politician, one part business tycoon, and one part Lothario.  That last part is where the restaurant gets its name from because “Bunga Bunga” is a joke that became synonymous with sex parties he threw for his friends and cronies complete with hookers, drugs, and bribes to keep everything hush hush…until recently when all of these allegations came to the surface. 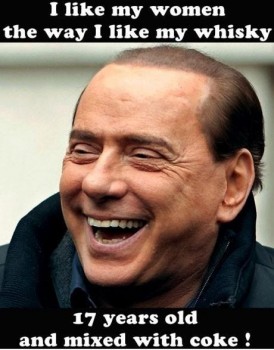 With all of this info in the back of my head, I was wondering what sort of mischief Bunga Bunga had in store for its diners.  As soon as we walked in, I didn’t see any saucy vixens, but there was plenty of Italian kitsch adorning every square inch of the walls. 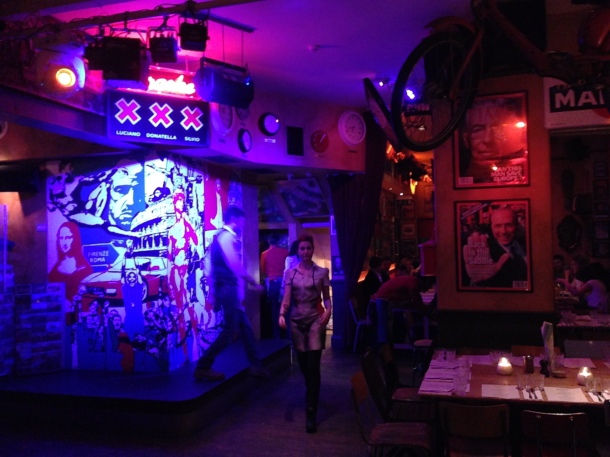 We knew it was a unique place when the servers would randomly break into a choreographed dance routine accompanied by pumping Italo-techo music in the middle of the restaurant (much to their annoyance).  I kind of felt bad for them since the novelty of it wore off after the first time.  Anyway, we started our meal off with three fancy mixed drinks (12 pounds each) that ended up being fantastic and hilarious since they sported names of famous Italians. 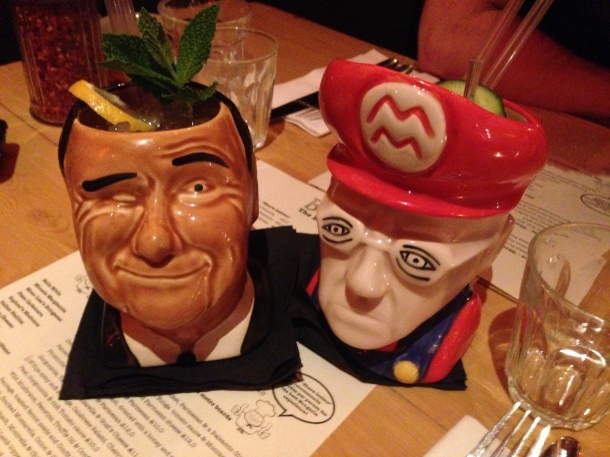 I got the  BungaBunga which was served in the head of a winking Berlusconi.  It consisted of gin, Martini Fierro, peppercorns, and grapefruit juice.  It was light and spicy with a bitter aftertaste, kind of like Berlusconi’s eventual fall from grace.  My friend Ravi got the SuperMario Monti (the prime minister of Italy post-Berlusconi) which was basically gin combined with muddled cucumbers which was cleaner and more refreshing than my cocktail. 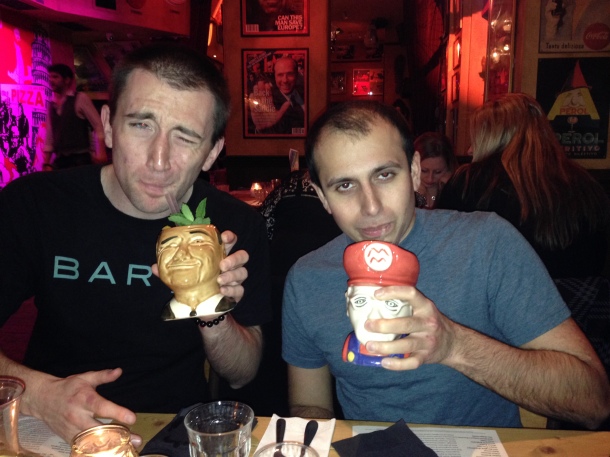 My failed attempt at winking.

As for my friend Bob, he’s a big footy fan, so he went for the Chellsi Balotelli (maverick soccer player who now plays for AC Milan) that had rhubarb vodka, rhubarb puree, cranberry juice, lime juice, and bitters all of which made a sour and strong drink.  Fitting for a man more known for his off the field antics and sulky personality.

For appetizers, we then got a side of cheesy garlic pizzicato (5.95 L) and cheese and spinach bruschetta (6 L).  The former was ok since it was starch combined with cheese, but I wouldn’t get it again since it was a bit too oily for my liking.

As for the latter, I liked the addition of spinach to modify the traditional bruschetta recipe, but once again it was extremely oily that kind of put a damper on the meal.

For the main course, we ordered three different pizzas (range: 9-13 pounds each).  I got the Ruby Loves (11 L); Bob ordered Chef Share-issimo’s Favorito (13 L); and Ravi’s a vegetarian, so he got The Naughty Napolitano (10 L) that had gorgonzola and pears on top.  Bob’s and my pizza were brought out on a long board like some sort of meaty centerpiece for a Roman feast.

My choice consisted  of N’duja soft sausage, salami, and cherry tomatoes.  It was tasty with the savory and salty meats but greasy once again (notice a trend?).  As for Bob’s side that contained rosemary seasoned lamb and chili, I liked it better because the lamb was expertly roasted and proved to be a lighter, less greasy topping compared to the pork products on my side.

I needed something to cut through the Mediterranean Sea of grease in my mouth, so I got their specialty, Ferrero Rocher gelato, for dessert. 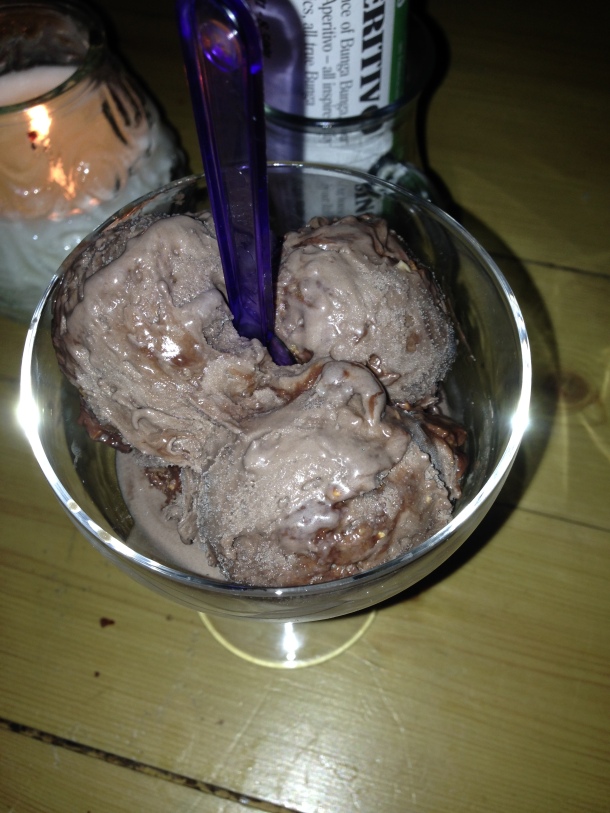 It did the trick as my palate was coated in a molto delicioso wave of semi-dark chocolate ecstasy with interspersed crunchy Ferrero Rocher candy pieces.

As the night went on, the place filled up with plenty of party goers as the stage was filled with a variety of performers like a cabaret singer, a magician, and karaoke singers.

Abra-ca-blabra. Make with the magic.

NOTE:  If you want to go to the discoteca upstairs, make reservations for that in addition to your table.  We made that mistake and were confined just to the first floor.  Either way, it was a fun time aside from a brief upset stomach compliments of the greasy food.  I recommend Bunga Bunga to anyone if you’re looking for a crazy dining experience, but I don’t think I would make it one of my regular haunts.

The following day was a bit rough given that we left Bunga Bunga, got crazy in the Clapham neighborhood, and didn’t make it home until 3 am.  Thankfully, it was laid back as Bob and I just spent most of it watching football or soccer in Amurikan.  Before watching the League Cup, Bob and I got lunch at a cafe nearby White Hart Lane.  While I was contemplating doing the English breakfast that had everything I loved like hash browns and bacon, I decided to go more for a footy classic with a steak and kidney pie with tea on the side.

I was disappointed with the pie and tea.  The crust was ok, and the insides were coated with a peppery white sauce.  However, they were missing a key ingredient:  brown gravy drizzled over the top, and the tea looked anemic.  As for the pea mash and chips on the side, they were passable.  Those were enhanced with the addition of this mysterious “brown sauce” that was in a squeeze bottle on the table that I could only liken to a sweet gravy with a hint of sour aftertaste and a lighter ketchup consistency.  This meal was as exciting at the Spurs vs. Cardiff match we saw, but maybe it just required a change of venue.  The only highlight was seeing Adam Richman of Man vs. Food fame on the field!  At least my last days in London would prove to be much more exciting.