There’s nothing I love more than a perfectly made sandwich.  From the crunchy bread to the random assortment of ingredients that reside between the foundation layers, it is a meal that can be customized for anyone from any walk of life.  Ergo, there are a plethora of different sandwich shops throughout the Chicagoland area, and I’d like to tell you today about Panes Bread Cafe.

I had never heard of this establishment prior to a random visit there with my girlfriend.  I didn’t really know what to expect from a place called a “bread cafe”.  I’m sure there would be coffee involved, but then what?  Random slices of bread to go with your espresso?  Anyway, we walked in and were greeted by a brightly painted interior decorated with an eclectic mix of Latin American artifacts, Italian movie posters, and colorful murals.

We walked up to the order counter and looked over the menu.

Panes offers everything from soups, salads, sandwiches, pizzas, and pastas, but I was eventually swayed to the bread side as I looked over the sandwiches.  While they had more tame options like a ham and cheese or a B.L.T., I went for the devilish pollo diablo ($5.95).  My girlfriend got the pompazo sandwich ($5.95).

They both came out about 10 minutes later as they constructed and pressed each fresh panini sandwich to perfection.  They both looked great with the golden potato chips on the side.

I wouldn’t consider my sandwich anything that would render Satan a hot mess due to the spicyness, but it had a slight kick due to the spicy mayo and peppery spice rub on the juicy, all white chicken breast.

I personally thought that the bread really brought the sandwich to the next level.  The pompazo was ok, but I felt that the rich and verdant pesto overshadowed the chicken, tomatoes, and cheese.  Pesto-avalanche aside, I was impressed by their fresh ingredients on perfect bread that was hefty enough to deal with me tearing through it like Pac Man in the labyrinth of white dots.  As for the potato chips, I really liked them because they were crisp but not too salty.

I highly recommend Panes Bread Cafe if you’re looking for a cozy cafe that offers plenty of fresh sandwiches that won’t cost you that much bread.

I Must’ve Pied and Went to Rich Man Heaven

Today’s post is going to be short and sweet like the dessert I ate after my Paraguayan meal.  Once I took down my fair share of empanadas, I wanted something sweet to balance out the savory fillings, so I found myself at Tartine.  Tartine is located in Itaewon at 119-15 Itaewon, Yongsan -Gu, Seoul. Take the metro to Itaewon station, and then come out of exit 1 and walk straight. It is in the second alley you pass on your right hand side.  Turn right and you’ll see the red sign on the right and left sides of the buildings.  Here’s their website.

When I got there, I felt like crying with how much stuff I wanted to try yet every item was insanely expensive. 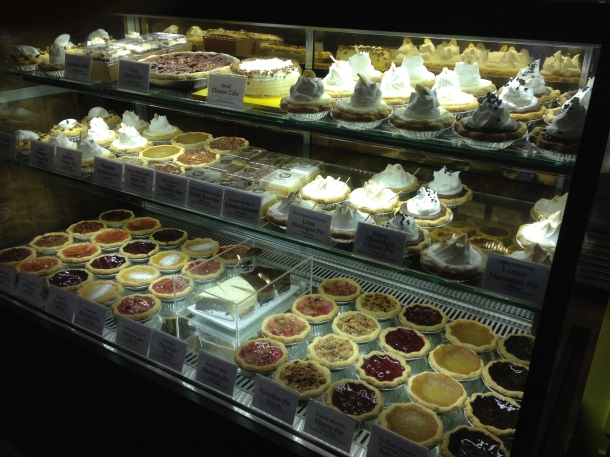 For the tiny pies, it ranged from 6,000 W-8,500 W.  A small chocolate cake cost 35,000 W!  I don’t know if they mixed in 24 Karat gold in the batter or used ground unicorn horn for the frosting, but that’s ridiculous.  Either way, I was just going to settle for a pie since I wanted to try it once.  They have a take out bakery on one side of the walk, and an actual cafe on the other side where you can sit outside when the weather’s nice like it was today.

I perused the case looking at various fruit, meringue, and chocolate inspired creations, but one caught my eye that really seemed unique.  It was called “Paradise Pie” (8,800 W).  When I got the pie, I still didn’t see why it was so expensive given the size, but the taste was somewhat worth it.

The crust was a typical shortening based crust that was average. but the insides were something delightful.

Basically, it was the equivalent of a chocolate pie and a pecan pie creating a tropical baby made of coconut with all of it covered in the signature pecan pie sugar sauce.  The whole pecans were crunchy and sweet while the small chocolate chunks were occasional nuggets of treasure I found while digging through the thick layers of brown coconut mixed with chocolate mousse.  It was very decadent, but I wouldn’t make this a regular habit.

If you want to try some competently made but overpriced desserts, Tartine is the place for you.

Lets Get Down To Business! To (Def)Eat the Huns!

Hello and welcome to another installation of Mastication Monologues!  I’m just getting off a long but rewarding templestay weekend in the mountains outside of Seoul.  However, upon returning to civilization, I was on a mission to try a new cuisine that I would have never have thought would be lurking in Seoul’s gastronomic dark corners:  Mongolian food.  Now, in terms of Asian cuisine, Mongolia would not be the first country that would come to mind, and who could blame me with China’s vast plethora of regional dishes and Japan’s global appeal with sushi appearing all over the world.  I would expect simple cuisine like a tenderized piece of beef that has been sitting underneath a Mongol saddle for weeks during a ride across the wind-swept steps (this is actually one theory that may credit the Mongol armies with inventing hamburgers).  So I found out that right by Dongdaemun History Park, exit 5 is Seoul’s very own Central Asian quarter.

In Seoul, Cyrillic reads you!

As soon as I walked onto the main street, I felt like I was transported to a land of Borats and Azamats, and they were watching me closely as I resemble their former Russian overlords.  History aside, I was soon in front of Darkhan Cafe (Дархан Kaфe) for some Mongolian cuisine.

Upon walking into the establishment, I was greeted with blank stares from the ladies running the kitchen and a few Mongolian guys from the table across the room.  I guess they’re not used to seeing outsiders in the restaurant, and I have to warn you now that the menus are only in Korean and Cyrillic for the most part aside from the drink menu.  My waitress was quite cordial and spoke a tiny bit of English to help me choose what I figured to be Mongolian goulash based off of the appearance in the menu and my rudimentary skills in sounding out Cyrillic.

It came out after about 15 minutes, and it looked very simplistic in appearance but hearty.  Just my kind of meal for 9,000 Won.  I don’t know if it was the fact that I spent the entire weekend eating only vegetables, but the pieces of meat were extra succulent, packed with flavor, and had a great ratio of fat to tender beef.

A meal fit for the Scourge of God

The gravy was a nice, slightly-salty compliment to the savory beef.  I also noticed the rice it was served with was drizzled with ketchup which I assume was a touch to modify it for Korean tastes.  However, I really enjoyed the pickled vegetables and carrot salad on the side.  The pickled vegetables were not obnoxiously sour, but did have a slight bite that complimented the bland white rice.  Plus, the carrot salad was quite rich because it consisted of julienned carrots mixed with some sort of mayo and Thousand Island dressing mixture that was strange yet strangely comforting.

Overall, I was satisfied with the meal.  Did it conquer my heart like Ghengis Khan did minus the pillaging/massacring/being related to 1 in every 200 men in the world?  Not really, but it was something new and exciting in a non-touristy restaurant.  So if you’re tired of going to the same old Korean/Western restaurant, come to Darkhan Cafe to experience your own piece of Xanadu (the kingdom, not the song).

The Delicious Bay of Pigs

Hello to all of my fellow gourmands and gastronomes out there!  Welcome to another article of Mastication Monologues.  Today I am going to be reviewing a little place in Chicago that is considered to have the best Cuban food in the entire city.  I’m talking about 90 Miles Cafe at 2540 W. Armitage.  There is another location located at 3101 North Clybourn Avenue, but I don’t know if it’s any different from the one I went to on Armitage.  Anyway, I was surprised that we even had Cuban restaurants in Chicago given that our Mexican population is much larger than any other Hispanic group, and obviously we’re a lot farther away from Cuba than Florida.  Last time I checked, we weren’t Miami with classic 1920’s art deco hotels, white sand beaches, and a more recent scourge of the sports world *CoMiamiHeatLebronJamesugh*.  Even though my expectations were not that high coming into this establishment, I was pleasantly surprised.

First, the outside was brightly colored and even had the signature buoy one could find in Key West that proclaims its status as the southernmost point in the contiguous United States on the roof.  I loved this decoration since it brought me back to when I actually went to Key West and got my picture taken with said tourist site.  Once inside, it was a very cramped area near the entrance, but when you move towards the larger dining area, it is actually quite cozy.  It’s also byob, so we ended up bringing Casillero del Diablo which was a Cabernet Sauvignon and had hints of black cherries which elegantly complimented my meal:  puerco rostizado. 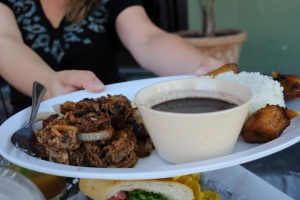 La estrella de mi cena (The star of my dinner)

When it came out, I was very excited because it definitely looked like something that you’d get in an abuelita’s kitchen in Havana.  It wasn’t the prettiest thing in the world, but I started with the roasted pork that apparently was infused with guayaba and mixed with pan-fried onions (yum!).  I’m as crazy for pan-fried onions as Tony Montana was in Scarface for da money, da power, and da women.  The pork itself was flavorful, tender, and had a slight sweet aftertaste which surprised me because I thought that the onions would overpower the guayaba.  Moving on from the main part of the entrée, I then attacked the rice and black beans like Castro’s forces against Bautista’s armies.  The rice was an average white long grain rice, but the beans were submerged in a black, pork based broth.  I wasn’t a huge fan of them being served like this, but they still were quite flavorful.  Anyway, I poured them into the rice, and it made for an interesting little goulash of sorts that I mixed with the pork on occasion.  The last item on my plate I saved till the end of the meal because I had never tried them before:  fried plantains or more commonly known as maduros (lit. “matures” or “ripes”).  I don’t know why I had never tried them before, but I was so glad that I did at 90 Miles Cafe because they were excellent.  The breading was even and slightly sweet and buttery which went along with the firm and ever so creamy texture of the plantains. 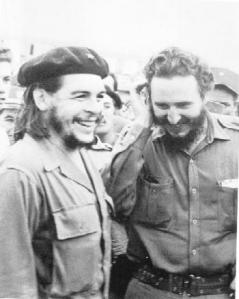 You don’t have to be a promoter of Marxism, smoke cigars, or rock a sweet beard to enjoy this cafe

So if you’re looking for an authentic slice of the forbidden island of Cuba, end your culinary embargo and head on over to 90 Miles Cafe in Chicago.

“The only things that the United States has given to the world are skyscrapers, jazz, and cocktails. That is all. And in Cuba, in our America, they make much better cocktails.”
Federico Garcia Lorca