I Scream, You Scream, We All Scream For Red Beans!

So I don’t know if this post could really hold a candle to my previous post (See Crazy Karate) where I ate a live octopus, but it’s about food that almost everyone around the world loves:  ice cream.  Whenever I’m traveling to different countries/regions of the USA, I like to see what sort of twists the locals can put on foods that I recognize in order to accommodate local palates.  With ice cream in South Korea, it’s no different even when it comes to an American chain that most people would recognize:  Baskin Robbins.  Before I get to some good old-fashioned American ice cream that has been Koreanized, let me quickly mention a purely Korean treat that I tried after going to Jongmyo temple with my friends.

I had kept on hearing about the different types of traditional Korean desserts like the ubiquitous rice cake or even 팥빙수 patbingsu which is shaved ice traditionally topped with azuki beans, fruit, and yogurt.  I’ve never tried it, but while rummaging through the ice cream bin at the CU convenience store, I stumbled upon a red bean popsicle.

Thankfully, it was a 2+1 deal, so I got other flavors as chasers to this red bean one if it was really terrible.  I was glad I did that because this bean-laden ice pop did not beat the unbearable heat and humidity. 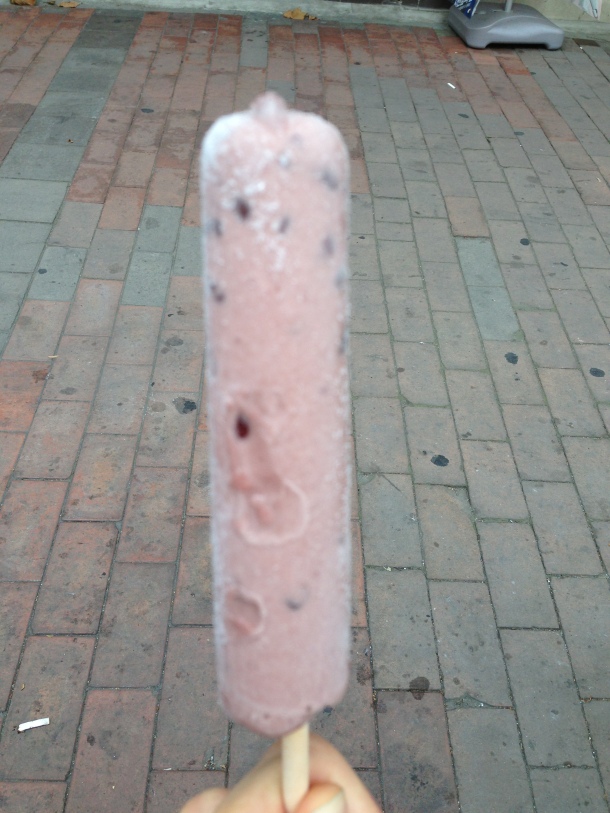 When I bit into it, I was immediately immersed in a world of whole red beans.  The medium in which the beans were suspended didn’t have much flavor, but I was overwhelmed by the savory sweet sensation.  It definitely wasn’t a good choice.  However, Baskin Robbins didn’t disappoint in terms of trying strange new foods.

My friend Carolyn and I decided to get dessert after a small dinner, and that naturally led us to Baskin Robbins since she has a major sweet tooth while I’ve never been to one in Korea.  I scanned the menu for something beyond the typical cone and cup binary, and my eyes wandered over to the “frozen desserts” section.  They were cheaper than ice cream, but the names sounded so odd like “Apogato” and “Honeybread”.  Definitely not like the ice cream shops back home.  I eventually settled on a snow mochi (2,000 won) and a biscuit choux (2,000 won).

I started with the snow mochi since I had already had mochi before.  For those who don’t know what mochi is, it’s a type of rice dough similar to Korea’s tteok where it’s quite pliable and has a neutral flavor.  I picked up the little pink ice ball and bit into it.

I don’t know what it was, perhaps my love for gummi candy, but the mochi’s rubbery texture combined with the hard, cold ice cream really made me love this small treat.  Plus, the mochi was strawberry flavored which resulted in a fruity vanilla swirl that would be hard to beat.

In the center, there was some sort of gelatinous fruit that I assumed was more strawberry paste, but overall, I was quite satisfied with the snow mochi. 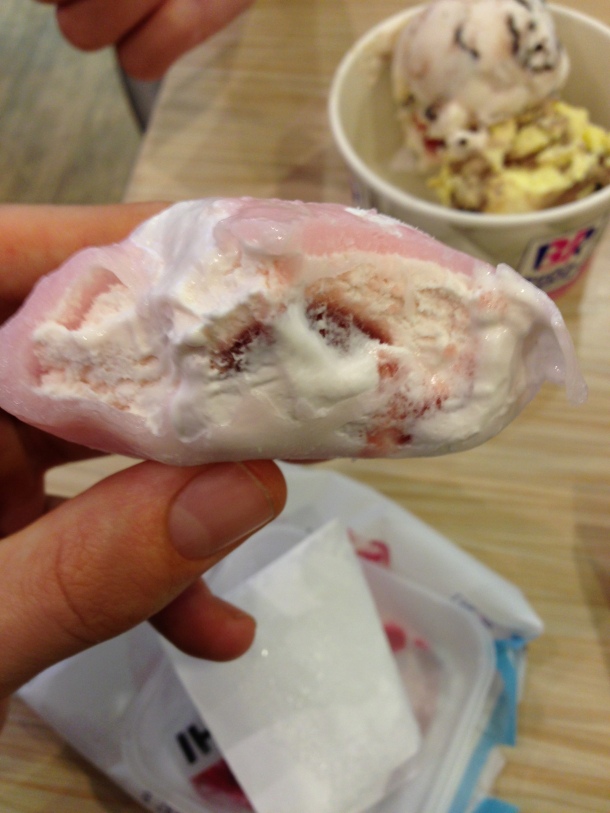 With the bar set high by the snow mochi, the biscuit choux was bound to not live up to the same expectations.  While the outside had the same appearance as some sort of dry pastry (choux is the same dough used in eclairs), when I bit into it I was greeted with some chocolate hidden treasure.

This was the only bright point of the biscuit choux.

The ice cream was great with a rich milk chocolate flavor and high butterfat content, but the pastry was a mere spectator to the show that was our dessert.  Alas, it was flaky and flavorless.  While the mochi was exotic and entertaining like a Cirque du Soleil show, the biscuit felt like this, entertaining but falling a bit flat.

Either way, I highly recommend that you try some Baskin Robbins while you’re in Korea if you’re looking for some delicious ice cream.  As for the red bean popsicles, I’m going to give them the cold shoulder in the future.

Annnnd I’m back once again to pick up where I left off in this culinary cliffhanger of a blog entry.  Last time I started out talking about the overall nature of the tapas restaurant Meson Sabika, and what exactly tapas are to the world foodie community.  Now, I can finally get to the heart of the matter with the actual description of these lilliputian dishes that stand large on any dinner table. 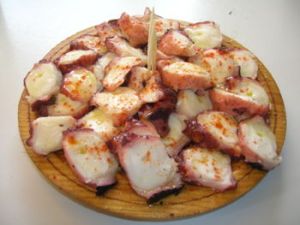 , but I can attest to Meson Sabika faithfully recreating these regional Spanish flavors stateside.  They serve both hot and cold tapas in typical Spanish fashion, so I’ll just comment on two hot tapas and two cold tapas to keep it short and sweet.  One of the cold tapas I’d recommend would be the rollito de buey (literally a “little ox roll”) which is absolutely sensational due to the fact that it uses a thinly sliced, succulent beef tenderloin wrapped around a mixture of blue cheese, dates, and Portobello mushrooms.  Now some would think that the addition of dates might turn some picky eaters off, but it provides a flourish of sweetness that nicely balances the earthy flavors of the mushroom, the acidic bite of the cheese, and the savory taste of the beef.  The second cold tapa I’d try again would be the patatas con alioli (potatoes with garlic and oil).  It’s a variant on your typical potato salad which utilizes the Catalan alioli mayonnaise that is molt creamy and packs quite a potent garlic punch.  However, I would not recommend this if you are on a very important date or business meeting since it can make your breath quite pungent depending on who’s making it that day so tread carefully (though if you love garlic as much as I do, it’s worth it everytime).

The duck but with pears, not apples 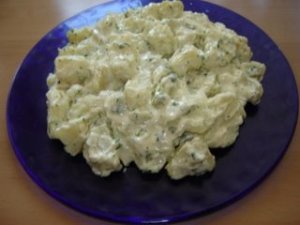 Definitely not the potato salad from your usual picnic

As for the hot tapas, it is a lot harder to just pick two  because they have greater variety and are quite more creative in terms of their presentation.  The first one you should order is the pato confitado (or duck confit for those who don’t habla español), but the name does not do this dish justice.  Although it is on the smaller size, like all the other tapas, it is a small leg of duck that has a very crunchy skin that leaves a sweet, smooth aftertaste on your tongue whilst the cinnamon apples provide a warm, contrasting texture to the duck skin.  Plus, there are mushrooms that are thrown in for good measure, but they really are not the highlight of this tapa.  As always, I saved the best for last with my number one tapa of all time:  patatas bravas.  This dish is quite possibly one of the simplest of tapas, but the one that I have seen the most variations of in terms of the preparation and taste ranging from bland, undercooked tubers to the perfectly fried potato cubes served with a side of peppery bravas sauce.  This aforementioned sauce, from what I have tasted in the states, has yet to be recreated with the same panache as they do in Spain, but thankfully Meson Sabika provides their own adequate touches to this fan favorite.  They dice up and fry fresh potatoes in a bowl while lightly covering them in a tomato based sauce that is not very spicy, and these potatoes are then covered with a generous helping of shredded Manchego cheese. 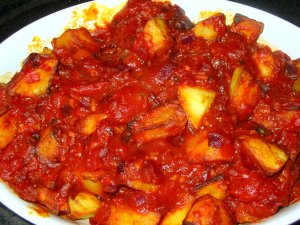 The Sauce is the Boss!

Even though this is not the traditional bravas I pine for, they are quite filling and the paprika in the sauce provides a punchy zing at the end of each bite that makes me always come back for more.

Overall, Meson Sabika provides a small slice of Spain in the Chicagoland area in the most elegant of settings.  The prices are decent, the food is fresh and delicious, and the atmosphere is ideal for any sort of occasion.  To close with two of my favorite Spanish sayings, I say hasta luego y ¡A beber y a tragar, que el mundo se va a acabar! (Let us eat and drink for tomorrow we die!).