Apart of Something Delicious

Hello to everyone out there in the blogosphere!  Welcome to another edition of Mastication Monologues where I review various restaurants, and let everyone know whether or not it’s worth it to spend your money at said establishments.  Today, I will be talking about a pizzeria in Chicago that I never even heard of until my friend said she had a Groupon, and my stomach was telling me, “Hey ya mook, fill me up with something!”  So, we decided to go to Apart Pizza located at  5624 North Broadway, Chicago, IL. 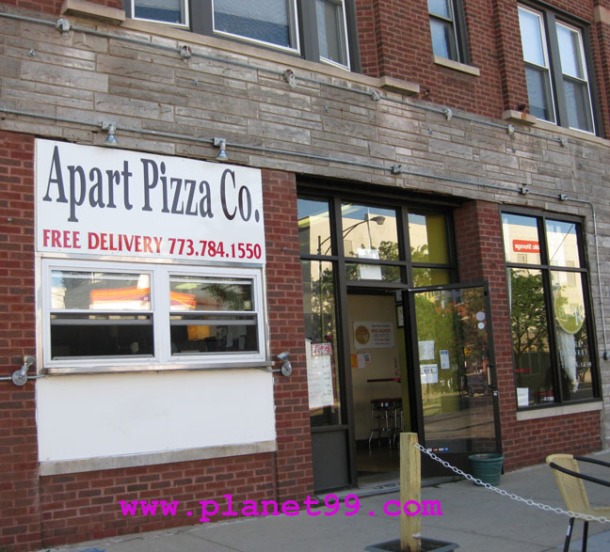 Now in Chicago, how pizza is made is a point of personal preference and pride when talking to outsiders.  Obviously, we have our arguments with New Yorkers about who has better pizza, and the best thing that Los Angeles has to offer in the pizza world is California Pizza Kitchen…no comment.  However, for the uninitiated to the NY vs. Chicago pizza polemic, it basically boils down to this:  crust.  Classic New York pizza is cut in slices and is paper-thin while Chicago has thicker, crunchier crust and can be cut in slices or squares (a.k.a. “Party Cut” if you really want to sound like a local).  However, Chicago also has its signature deep dish pizza which is like a thick pie of sauce and cheese, and it will fill you up after two slices.  Anyway, I’m a firm believer in the overall superiority of Chicago pizza to New York pizza simply based off of the variety we have, but I guess it’s like comparing apples and oranges.  I’ll let you be the judge.

Moving on from culinary debates, we walked into their very unassuming storefront to find a tiny dining room with only three tables in it.  If you are planning on coming there with a large group, I would recommend taking advantage of their free delivery services.  I ordered the Pollo Tuscano pizza, and my friend ordered the Queen Margherita.  I was surprised when it came out because it turns out that it was New York style with very thin, floppy slices, but I still greatly enjoyed my pizza. It was festooned with chicken, mushrooms, onions, roasted red peppers, and small cubes of Feta cheese.  Once I let the blazing pie cool off, I proceeded to chow down on its golden crust that was lightly dusted with flour.  The cheese to sauce ratio was pretty evenly proportion and taste-wise and allowed for the sweet peppers to do a lively tarantella with the bold tasting onions and  fresh Feta cheese.  As for the chicken, it was a bit on the dry side, so I think it could have been better if they perhaps used shredded chicken instead of the cubes.  Plus, the mushrooms were pretty much a non-factor, so I don’t know why they even put them on the pizza.   My friend’s Queen Margherita was a classic pie with fresh tomatoes, buffalo mozzarella, and basil leaves.  It was very thin, light, and fresh like the queen this type of pizza was named after, and it’s always a solid choice for those vegetarians out there.

So if you’re looking for a slice of Big Apple pizza while visiting the Windy City or are tired of the gut busting proportions of a Giordanos deep dish pizza, try out Apart Pizza!  It truly is a star on Broadway.