Well, if you’ve been following the various posts of my Portland adventures, you’ve seen that I’ve been trying to sample a wide variety of foods.  Everything from breakfast fare to haunted pizzerias have gone into Mastication Monologues, and today I’ll be talking about the food experience one must try when in Portland:  Voodoo Doughnut.

Ever since I’ve been watching the Travel Channel regularly, which has been a very recent practice, Voodoo Doughnut has always managed to pop up on some sort of wacky food program or just general tourism show.  Why would that be?  Well, Voodoo Doughnut isn’t your typical mom and pop bakery.  This franchise delves into the darkest realms of the occult religion and comes up with some culinary creations that only a the craziest houngan (voodoo priest) could imagine.  Not only that, but this establishment allows people to be wed through their shop.  Tie the knot with a couple knotted cinnamon twists?  Only at Voodoo Doughtnut!  They offer basic, non-legal weddings for $25 all the way to the “Whole Shebang” package for $6,600 that includes airfare, hotel, legal ceremony, and a tour of Portland.  I could go on and on about what makes this place so unique, but I was surprised to hear Portland natives’ reactions to my delight in going to Voodoo Doughnuts.  Most were begrudgingly accepting of this bakery like it’s the popular kid who’s really loud and obnoxious yet everyone wants to be his/her friend.  While others seemed to be happy that I tasted probably the most popular part of the Portland culinary scene.  This general joy was reflected in the omnipresent line I saw outside their original location at 22 SW 3rd Ave.

They’re open 24/7 aside from major holidays, but I heard from a friend of a friend who is a native of Portland that back in the day they used to hold very odd hours like 11 pm to 4 am, close for two hours, and then open from 7 am to 9:23 am or something like that.  Seems like they know how to pounce on financial opportunities while still maintaining their extremely strange vibe.  Doughnuts’ prices range from 95 cents to $3, and they only take cash!

My Voodoo Doughnut experience started after another bizarre experience that involved me going to a 21+ mini-golf course.  I could only liken it to a mix between a hands-on arts gallery and a fun house which included CO2 powered 50 caliber golf ball guns, a low rider, and a scratch and sniff wheel to name a few holes.  Once I made my way through the course, I knew I had to take the plunge and get my Voodoo on.  It was raining, so I was in full Deatheater mode with my black jacket’s hood up as I walked up to the line that was snaking past the barriers.

Thankfully, it didn’t scare my new friends I made in line who took the form of a large bachelorette party.  It made the wait go by faster as we talked about travel, and eventually I stepped foot in this hallowed ground of creative snack cakes.

Their menu was as eclectic as their decor as I didn’t have any clue what to get.  I saw most people were ordering a dozen doughnuts each, but I didn’t really want to end up as round as a doughnut by the time the night was over.  After attempting to ask what the girls in the bachelorette party would recommend I should get, they all seemed deadset on the bacon maple bars…boring.  I know you can get those in other doughnut shops in the USA.  So, I first went with Voodoo Doughnut’s signature voodoo doll doughnut since I felt obligated to try it.  Then, for my second choice, it was extremely tough to choose.  The Mexican hot chocolate really was calling to me along with the Butterfinger chocolate and Marshall Mathers doughnuts.  However, one won out as I made my choice:  the O.D.B. (Old Dirty Bastard) doughnut.  I had no clue what was on it, but I picked it since it pays homage to ODB, the Staten Island rap group Wu Tang Clan’s wackiest, most drugged out, and quite possibly mentally handicapped member.  I present Exhibit A and Exhibit B.  Requiem in terra pax, dawg.  If this doughnut was as crazy as him, I expected a real treat, and a treat I did receive.  I ate one for breakfast the following Friday and Saturday, and the Voodoo Doll doughnut went first.  First, it wasn’t as neat as I was expecting the doll to be since it didn’t seem to have a face or any sort of discerning facial features. 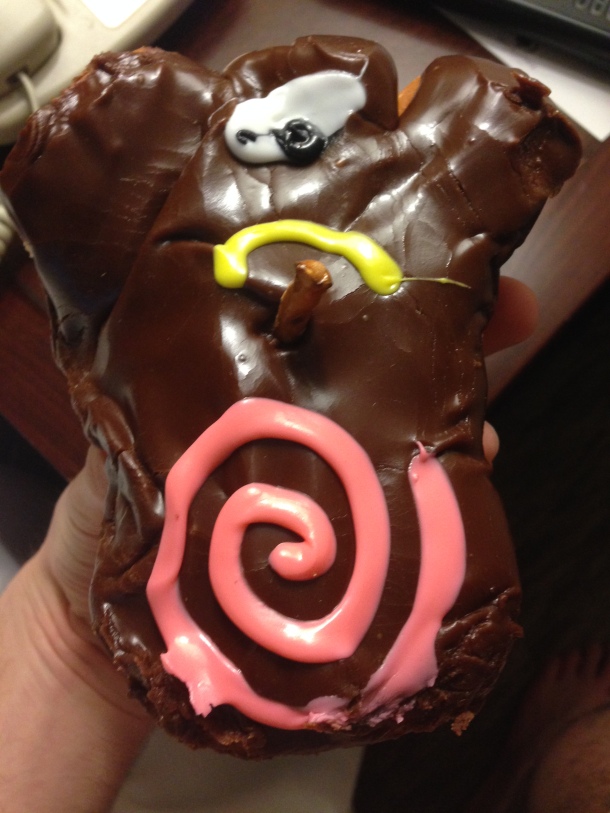 There still was the pretzel driven into the torso of the doll which might have been an omen of my fiery food downfall later in my trip…tastewise, it was great.  The yellow dough was soft and spongy with a mainly neutral taste with hints of its buttery upbringing.

This allowed for the thick, rich milk chocolate frosting on top and gory, sweet raspberry jelly inside to sanctify this food sacrifice to Baron Samedi, lord of the Voodoo underworld a.k.a. my stomach.  As for the Old Dirty Bastard doughnut, it seriously was as over the top like one of ODB’s freestyles. 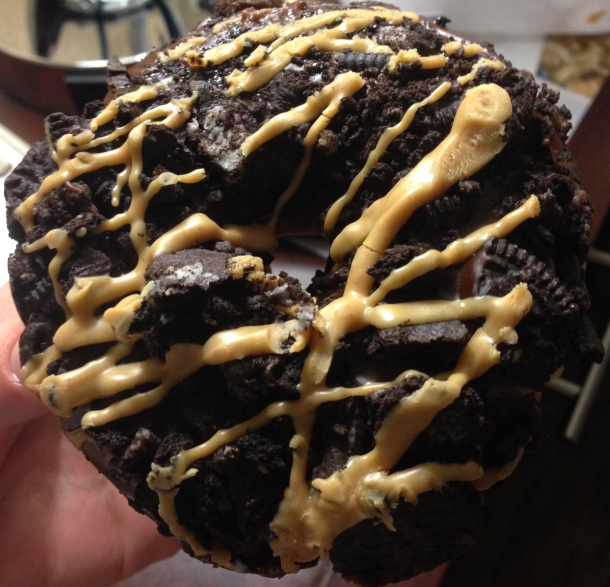 It started with a traditional yeast-raised ring doughnut with the same dough as the Voodoo doll along with a similar chocolate frosting on top.  Then it got extra dirty with the giant, crunchy chunks of Oreos heaped on top that were then tricked out with a generous drizzling of peanut butter.

It was like eating a giant Reeses peanut butter cup cake with Oreos on the inside.  Needless to say, it gave me the gangsta power to walk up a mountain to see the Pittock Mansion (a great non-food related sightseeing area in Portland).

So if you want to try probably the most touristy spot in Portland with some tasty desserts (although some Portlandians might say otherwise), get yourself down to Voodoo Doughnuts or else you will be cursing the day you decided not to go.