Hola a todos y bienvenidos a un capítulo nuevo de Mastication Monologues!  For those who don’t habla the espanol, I basically said, “what’s up and welcome!”.  Anyway, the reason why I busted out the Spanish is because I tried Paraguayan food for the first time today.  Now, if you don’t really know South America, there are basically two countries that dominate the world’s imagination when anyone mentions the continent:  Brazil and Argentina.  These two nations have become so famous thanks to their futbol teams/players, food, women, and not to mention the fact that they’re gargantuan and take up most of the continent.  Therefore, little landlocked Paraguay doesn’t stand a chance to have its voice heard on the global stage when it’s being drowned out by samba, tango, and pan pipes from Bolivia. 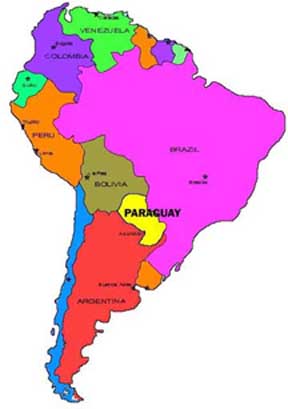 Somehow a slice of this South American minnow landed in Itaewon in Seoul in the form of the restaurant Comedor or “dining room” in Spanish.  It’s located at 130-3 Itaewon-dong, Yongsan-gu, Seoul (서울시 용산구 이태원동 130-3).  You can get there by walking out of exit 4 of Itaewon Station and turn around. Take a right at the intersection and then take another right at the small alley. Comedor will be on your left across from Wolfhound Pub. 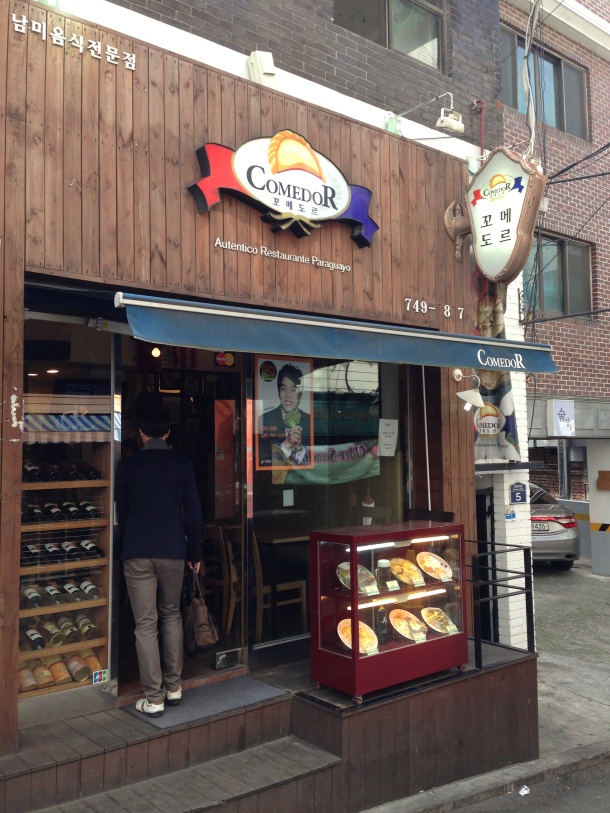 The inside is very cozy and could probably hold only 10 people max at a time, but I personally preferred it to a large, noisy place.  There was only one waitress in the place which added to the homey atmosphere.  The menu consisted of individual empanadas (small pockets of meat, cheese, and vegetables) ranging from (4,000-6,000 W), menu of the day, and sides like chipa which is a native Paraguayan bread.  I ended up getting the combo platter (14,000 W) which consisted of three different types of empanadas, regular chipa bread, cheesy chipa bread, and a beverage.  For my beverage, I wanted to get mate tea (cocido 4,000 W, caliente and terrere varieties 6,000 W) which is the national drink of Paraguay and consists of brewing the leaves of the yerba mate plant.  Even though it wasn’t part of the combo deal, my waitress didn’t charge me for it probably because I spoke Spanish with her (hint hint for all you hispanohablantes out there).

When it came out, I didn’t know where to start first, but who was I kidding?  I was going straight for the empanadas. 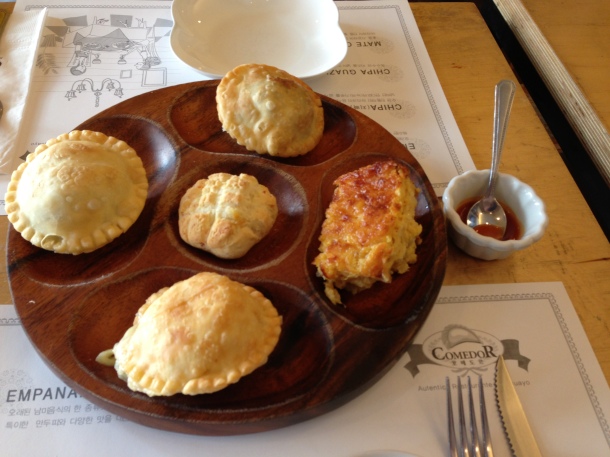 First, there was the cheese and corn one.  It was a great combination since the corn was very sweet, and the cheese was slightly salty and gooey.  The flaky pastry crust was a golden blanket that kept these two ingredients piping hot which really brought out the flavors even more. 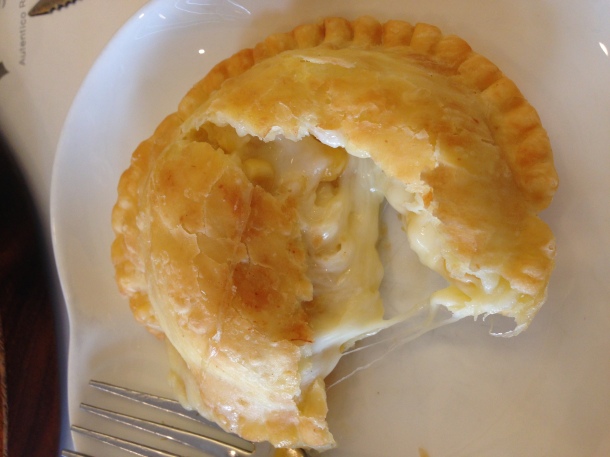 I splashed some of the spicy Tabasco-esque sauce from the side bowl on top of a piece, and it was a spicy, salty, sweet fiesta in my mouth.  Next came the chicken empanada. 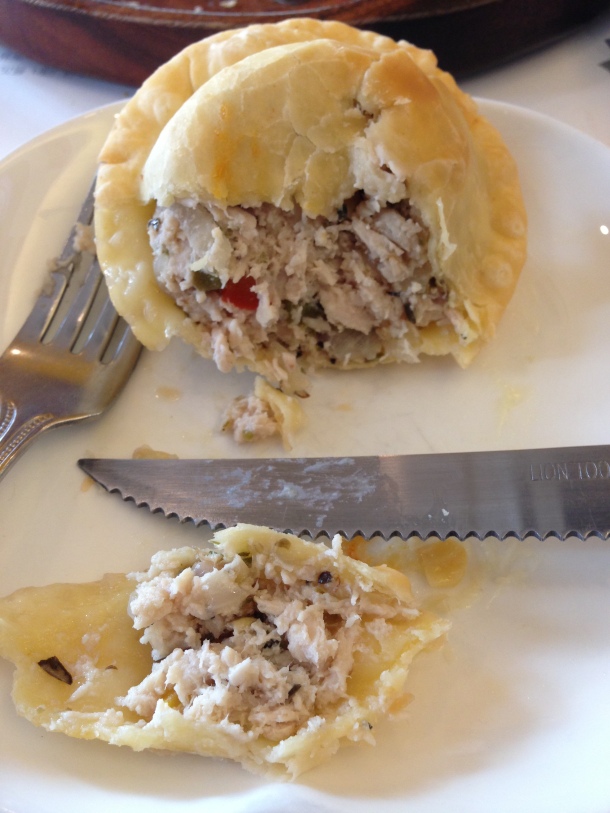 I wasn’t really blown away by this empanada since the chicken was on the dry side, but the pastry was still executed to excellence.  As for the final beef empanada, I was a bit surprised because not only did it have seasoned ground beef in it but also hard boiled egg crumbles.

This added an extra flavor/texture dimension to another possibly pedestrian empanada.  So out of the three I tried, the cheese and corn one stood head and shoulders above its less flavorful companions.  Then there were the two types of chipa bread whose name comes from the indigenous Guaraní language of Paraguay that still is widely spoken.  I tried the cheesy chipa first, and it was like corn bread mixed with Cheetos in a good way, i.e.  it wasn’t as radioactively orange, and I didn’t get the cheese dust all over my fingers.  Once I forked every last crumb down, I attacked the yuca chipa bread. 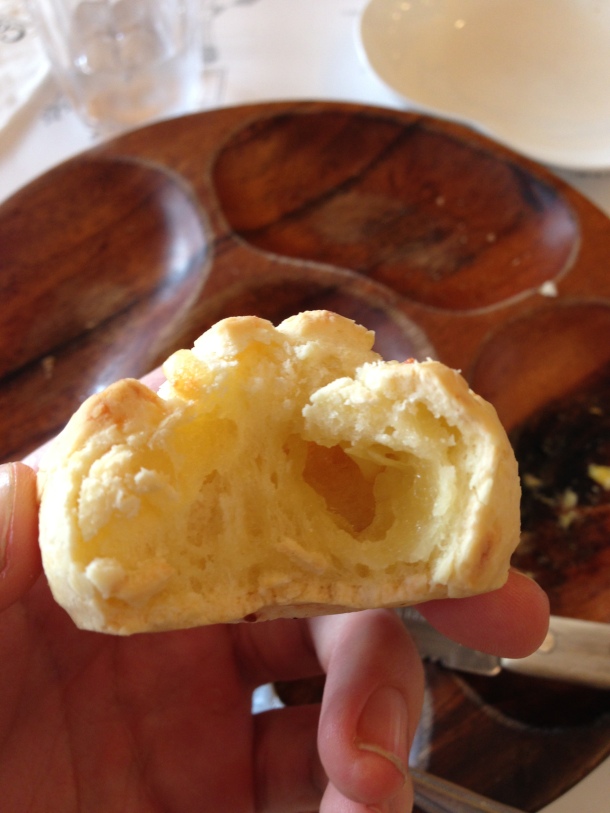 It was a great last piece of the platter because it was very similar to the Brazilian pão de queijo or “cheese bread”.  It’s exactly what it sounds like.  The actual bread was ever so crispy on the outside but quite soft/pliable which gave way to a moderate, interior coating of fresh white cheese.  To drink, it was a bit of folly on my part.  As I said before, I ordered mate tea, but there are three different types on the menu:  cocido (cooked), caliente (hot), and terere (cold in Guaraní).  I got the cocido thinking it was the traditional mate served out of a gourd with a metal straw, but instead I got the gentrified version of it in a fine china teacup.  Qué lastima!   Turns out the other two were the traditional versions.  Nevertheless, it was a potent brew that reflected its indigenous roots in every sip through a mostly herbal flavor profile while being consumed in a European manner.  One could say it was a microcosm of Paraguayan society within one cup of tea.

So if you’re tired of eating the same old tacos and nachos at Vatos in Itaewon, try out Comedor for some rare South American fare.