The Quay to a Man’s Heart Is Through His Stomach

Hello everyone once again in the blogosphere to another addition to Mastication Monologues.  Unfortunately, it has been hotter than the inside of a Pepperoni Hot Pocket as of late in the Chicagoland area.  So while lurking about in my air-conditioned cocoon known as my house, I decided I might as well write about a delightful restaurant I visited a few weeks ago.  A friend, Maria Jose, was in town from New York, and she decided she wanted to try out this new place called Quay (pronounced “key” not “kway”; confusing, I know).  It is located at 465 East Illinois Street  Chicago, IL 60611 in the River East building.  Unbeknownst to me, I would be pleasantly surprised by her suggestion.

First, I was surprised at the location because I remember during my childhood the River East building being a hollow shell of an edifice mainly housing empty storefronts with the occasional video game arcade or art gallery, but it functioned mainly as a mooring hub for boats making their way out to the lake/Navy Pier.  Therefore, when I showed up to a buzzing and elegant restaurant with al fresco dining, I was gobsmacked.  There is valet parking for 12 dollars and is valid all night (I opted for this option), or you can park in the parking garage across the street.  As we entered, the decor of the restaurant was very sleek and modern with softer lighting in the bar area, and the staff were very friendly. 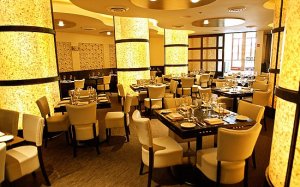 We first split a bottle of Tangley Oaks, a Merlot from Napa which was a soft, full-bodied wine that was not too overwhelming (mind you, I am not a sommelier by any stretch of the imagination, but it was a pleasant compliment to my meal).  The menu boasted a variety of American options (steak, burgers), French cuisine (Tarte Flambe, Lamb au Poirve), and Italian cooking (Suckling Pig Porchetta, Insalata Caprese).  For dinner, I decided to order the Spring Risotto which contained fava beans, english peas, braised radish, spring onions pecorino pepato, and truffled nettle puree.  Unfortunately, I was unable to take a picture of this tiny masterpiece, but it was elegantly presented on a simple white plate along with a drizzling of olive oil and a very dark vinaigrette to provide a bit of slightly bitter bite to the risotto.  The actual rice dish was very nicely balanced as the rice was not too soggy which sometimes can happen to cream-based rice dishes.  Another part of the dish that I enjoyed was the fact that all of the ingredients weren’t simply assimilated into the flavor background.  The english peas were served whole and not mashed contrary to their English heritage.  I am a huge fan of onions, and the spring onions strangely gave the risotto a slightly sweet aftertaste now and then which made me excited to explore more of the nooks and crannies in this mini-mound of goodness.  The pecorino pepato (peppered Italian cheese for those of you who don’t parla italiano) was lightly grated in thin, snow-white slices and perched gently atop Montecello Risotto.   This cheese lived up to its peppery name, but it was not very spicy for those worried about mouth scorching foods.  Plus, the heat of the risotto melted the cheese slightly which made it easier to mix into the rice and integrate it with the other flavors on my palate.

Whilst I was greatly enjoying myself, my friend Maria Jose had a slightly different dining experience.  She ordered the Oven Roasted Sea Bass with a side of grilled asparagus as a substitution for the baby spinach at no extra charge.  Upon tucking into the verdant and evenly grilled and seasoned spears, she found a small amount of hair.  She brought this up to our waiter who was visibly disturbed at this discovery, but he was a gentleman about it and the manager apologized/covered Maria Jose’s meal.  Our waiter even went above and beyond general hospitality and allowed us access to the lounge/bar in the back section of the restaurant even though there was a private function.  It has a lovely view of the Chicago River along with very tasteful furniture and a classy bar area.

The spacious lounge at the back of the restaurant

Upon returning to our table, we finished our main courses and split one of their special desserts for the night:  ice cream sandwiches made with homemade dark chocolate cookies and banana gelato on the inside along with a side of raspberry compote.  These small sandwiches lived up to the Latin phrase “Multum in Parvo” (A lot of stuff in a little package).  They were probably only as big as silver dollars, but the chocolate from the cookies meshed perfectly with the banana gelato to create a classier version of eating frozen chocolate bananas on a stick.  The raspberries also served as a subtle contrast to these two sweet elements with a  slightly sour contribution to the dessert course.

On the whole, I would recommend Quay to anyone who is looking to try out a new restaurant/bar/lounge in the Streeterville area for  a lunch or dinner before Navy Pier, a pre-movie meal, or just looking for a new place to expand your gastronomic horizons.  Even if your visit may seem like it is teetering on the verge of becoming un Inferno like ours was, the helpful staff and delicious food can definitely leave you feeling like you’re in Paradiso.

You may come in as happy as Dante…