Hello to all who have been following my blog, and I am finally ready to write another one of my fantastic entries about the restaurants I have been to in my life so far.  Unfortunately, as of late it has been quite barren in terms of seeking out new eateries to sample due to various factors such as work, translation studies and saving babies from burning buildings (the last one is just a hobby).  However, after talking to some friends, they actually brought up a good idea about a genre of food that I have been ignoring for the longest time and yet have probably the best aptitude on judging the overall quality of the meal:  tapas!

Now many of you have never tried tapas or perhaps have heard a little bit about them.  First off, Spanish cuisine is nothing like Mexican cuisine (i.e. there is very little use of spicy ingredients like jalapeños, the portions for tapas are not like the Mexican burritos that are as big as an artillery shell, and a Spanish tortilla isn’t a type of flatbread but rather a gelatinous omelet of sorts just to name a few differences). 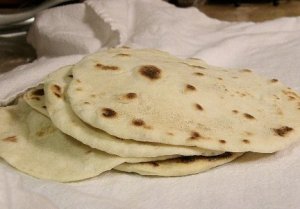 Tortillas We All Know and Love from Taco Bell 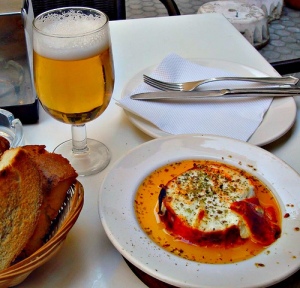 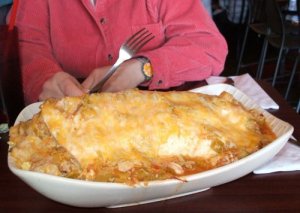 Instead, the tapa style of eating is an integral part of the Spanish culture and often reflect the regional specialties in the choices of ingredients.  In terms of the history of tapas, the name of these curious little appetizers comes from the Spanish verb tapar which means “to cover”.  What exactly did these pieces of food cover you might ask aside from satiating your beckoning hunger?  Well, the legend depends on who you’re asking, but one source says that Spanish King Alfonso XIII received a glass of wine at a local tavern in Cadiz with a piece of bread with chorizo (sausage) on top of his beverage to keep flies out  and sand out of his food due to the fact that Cadiz is on the southern Spanish coast.  Presently, tapas are no longer served on top of glasses of wine but are often arranged in bars all around Spain as a sort of buffet which patrons move from bar to bar while standing and enjoying these freshly made little bites of deliciousness while also partaking in many different types of local beverages whether they be a glass of sidra (alcoholic cider common in the Basque country) or cava(a variant of champagne native to the Penedes region of Catalunya) for example.

It´s like Cheers with More Food and Less Ted Danson

After staying in Barcelona for a year and returning to the States, I longed for my dear tapas that I would often partake in after a long day working at my studies or as a meal before the discotecas at night.  After going to many different tapas restaurants around the Chicagoland area, I decided to highlight Meson Sabika located at 1025 Aurora Ave Naperville, IL 60540.  It is probably one of the most authentic taperias I have been to so far stateside, but the ambiance alone will make you fall in love with this charming eatery.

The actual restaurant is quite different than the usual ethnic restaurant because it immediately creates a sense of elegance as it is housed in the mansion of a deceased millionaire from the turn of the 20th Century.  Plus, due to the spacious groundspace, they host wedding receptions in the guest house which is quite roomy and outfitted with all the amenities for a bash no one will forget…but I digress.  Upon walking in the door, you will feel as if you were taken back to a forgotten time as the narrow staircase leads upstairs to the banquet rooms as the main dining rooms on the first floor are always packed with people to the left and right of you (On weekend, I definitely recommend making reservations especially if the weather is nice).  Plus, every Friday night from 8pm to 10pm, there is live flamenco guitar and flamenco dancing which definitely adds to the overall experience of dining. 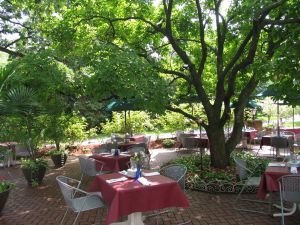 I’ll comment on the last time I was there which was this past June, and it was an absolutely gorgeous day.  So, I managed to eat for the first time outside on the patio, and the location was perfect.  Our waiter was very attentive and even explained what tapas were even though my friend and I lived in Spain, so we just nodded our heads and agreed while admiring his ardor.  To drink, we actually ended up ordering the pomegranate sangria which is not on the menu but should definitely be tried (insider tip right there!).  The wine provided a tart fruity tang with a slight aftertaste of the brandy/the chopped up oranges and lemons and limes.  If you want to try some other Spanish drinks that are quite easy to make if you’re having a big party or are looking for a new drink for the summer, I would recommend tinto de verano (summer red wine) which has many variants, but I often had as red wine mixed with lemon soda or a kalimotxo (pronounced ca-lee-moh-cho) which is 50% cola and 50% red wine.  Now that I have set the scene, the next post will expound on the mouth-watering tapas that will make you want to hop on to the next plane to the peninsula.  Hasta luego for now food fans!