Howdy, Mastication Monologues readers!  I’ve been finding it harder as of late to keep up with my posts due to all of the fun happenings with the girlfriend and the job hunt.  It seems like my inbox has been filling up with new places to write about, and I’m not even done with this throwback Europe series.  It is nearing the end though, so I will have plenty of new restaurants to talk about in the near future.  Anyway, back to the throwback vein of things.  Today’s post brings us to the old but vibrant port city of Amsterdam.

I visited this city twice while living in Spain, but I found the second time around a lot more enjoyable.  The first time I went there, for my birthday, it was deathly cold and windy.  Northern Europe in the beginning of winter, go figure.

As we walked around the city, we were almost run over by the prodigious hordes of bikes that are all over the city.  If you go there, keep your wits about you because you will get cracked if you’re too engrossed in a guide book or your smart phone.  I found Amsterdam to be a quaint city that would have been more enchanting in the summer since I was more focused on not having my hands and nose fall off due to the chilly arctic winds.

The canals and narrow houses harken back to the golden era of trade for the Dutch trading companies in global trade led by their innovated flat bottom barges that were useful in the canals of the city and the rest of the Netherlands.  We managed to see the Rijksmuseum, Anne Frank House, and the infamous Red Light District and a few coffeehouses while we were there.

The latter two are the most notorious parts of Amsterdam for different reasons.  The Red Light District since the canals are lined with full sized glass doors with each one sporting a lady one could spend time with for a fee.  However, contrary to popular belief that an area filled with prostitutes is extremely dangerous, it was one of the safest places in Amsterdam we walked in as there were men, women, and even old couples strolling past the sex shops.

I don’t think sex AIDS would be easy to sell

There were even police on almost every corner, taking pictures of any of the working girls is prohibited in the Red Light District (you will get your camera confiscated by the authorities), and CCTV cameras watch out for troublemakers.  The Dutch government, being liberal leaning since the 1400s, deems these window sex workers legal, collect taxes from them, and even require the girls to get regular medical exams to identify and prevent the spread of communicable diseases.  As for the coffeehouses, not only do they serve caffeine-laden beverages but also marijuana if they have the proper license.  The smell is inescapable if you walk down the street in some areas, but it is nothing that is out of control in terms of people overindulging in public.  The Dutch government is also cracking down on foreigners coming into the coffeehouses due to drug tourism and gangs attempting to sell hard drugs to coffeehouse customers.  While these two aspects of Amsterdam seem to be the most popular in the collective imagination, I’d like to talk about two unique Dutch foods I tried while there:  drop and rijstaffel.

My meeting with drop or licorice in English came in the train station under Shiphol Airport as we were waiting for our train to the main train station in Amsterdam.  I had heard that drop was the most popular Dutch candy, and lo and behold I found some in a vending machine.  Turns out that the Dutch consume the most licorice in the world, but I heard that this drop was definitely an acquired taste.  This particular variety was half and half nibs where one half of the piece was fruit flavored while the other was the signature black drop.

The first bite of this Dutch candy left me greatly puzzled since it didn’t taste like normal black licorice.  After a bit of research, it turns out that it is flavored with ammonium chloride which gave it a salty yet stinging flavor.  Out of my group of friends, I was the only one who enjoyed the chewy, mystery chemical licorice.  Later on during our trip, we tried a Dutch specialty known as rijstaffel.  The word “rijstaffel” in Dutch literally means “rice table” since it is a style of dining that originated in Indonesia during the Dutch colonial period in the 1600s and continued through to 1945.  The Dutch traders wanted to eat elaborate meals that encompassed all of the interesting Indonesian dishes that existed throughout the archipelago, so the rijstaffel was born. 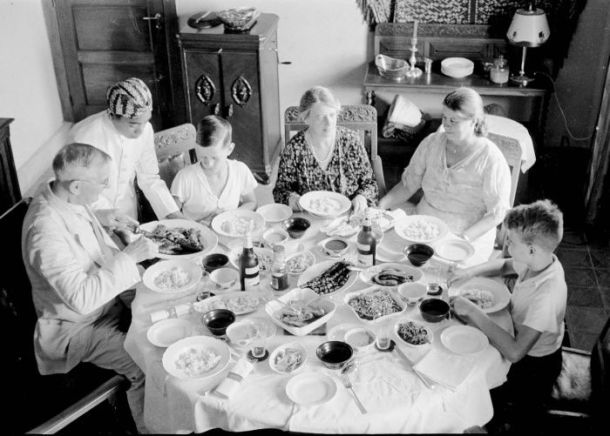 First, the servers would bring out a large plate of rice, and put it in the middle of the table.  Then, anywhere from 10 to 100 smaller dishes, depending on how many diners there were, were brought out and combined with the rice.  Indonesia has done away mostly with the rijstaffel since their independence in 1945, but this Dutch colonial tradition still is going on strong in Amsterdam as we experienced a slice of history.

I remember the chicken satay served with sambal kacang (peanut sauce) was particularly delicious along with the bebek betutu (duck roasted in banana leaves) that was extremely tender with an essence of banana baked into the meat.  Some of the other common dishes include nasi kuning (Indonesian yellow rice), nasi goreng (fried rice), lumpia (spring rolls), and babi kecap (pork belly in sweet soy sauce).  I could go on forever with the other small plates since we had about 20 different dishes for about 30 Euros, but I highly recommend the rijstaffel if you want a unique Amsterdam dining experience.

Things have taken a turn for the amazing for my blog as I’m quickly approaching the 130 post mark, and more and more of people are liking Mastication Monologues as I get the good word about different types of food out to the world.  Thanks to everyone for your support, and keep on viewing, commenting, and liking!  Today will be no different as I continue my recap of my vacation mastication adventures.  This series will be talking about all the wonderful things I tried while staying in Beijing, China.

Now, I’ve had my fair share of Chinese food which ranges from hot pot to some delicious dim sum to even tongue-numbing Sichuan cooking, but mainland China definitely knew how to push my buttons and boundaries as the daring gourmand that I am.  My first food experiences started, oddly, with a trip to McDonalds.  Now, I know what you’re thinking, ‘Mark, why would you want to go to a worldwide chain that has been slowly eroding local eating customs since 1955?’  Well, dear readers, while I do like my McDonalds back in the USA, I also like to try it in different countries to see what sort of unique options they offer that cater to the tastes of the local population.   At this Beijing branch they had most of the standard burgers, but I was drawn to the beef or chicken rice wrap.  I got one of those along with a taro pie for dessert.  The beef wrap was delicious since the meat was flavorful along with some good, not great, fried rice. 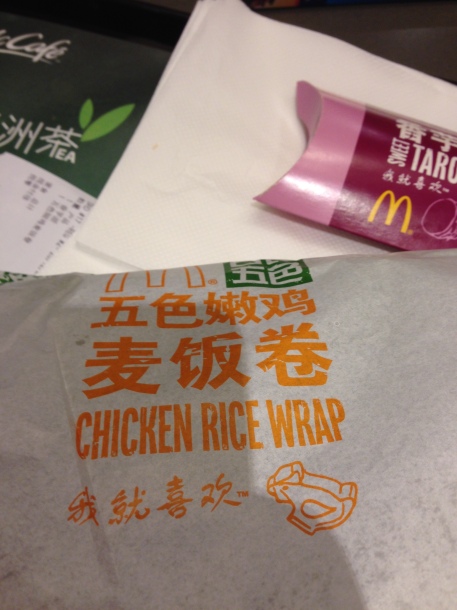 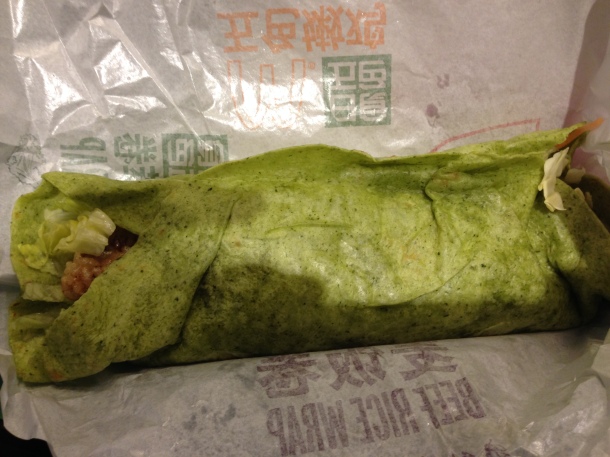 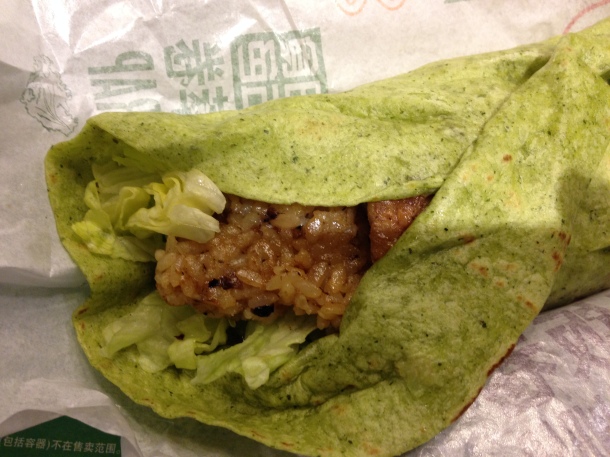 I was more partial to the taro pie. 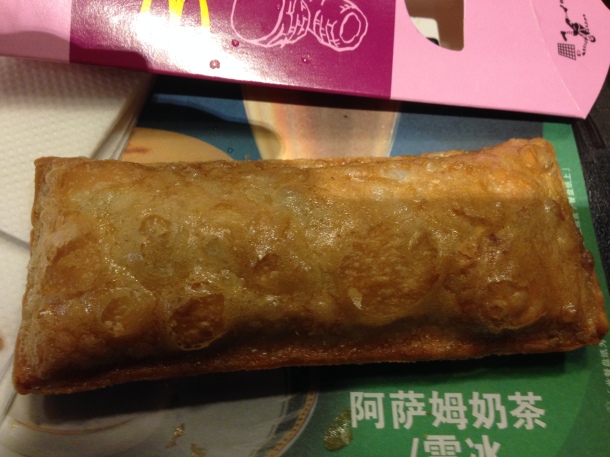 Think your classic McDonalds apple pie, but beneath the cinnamon-sugar encrusted dough there are sweet, steaming pieces of purple taro inside. 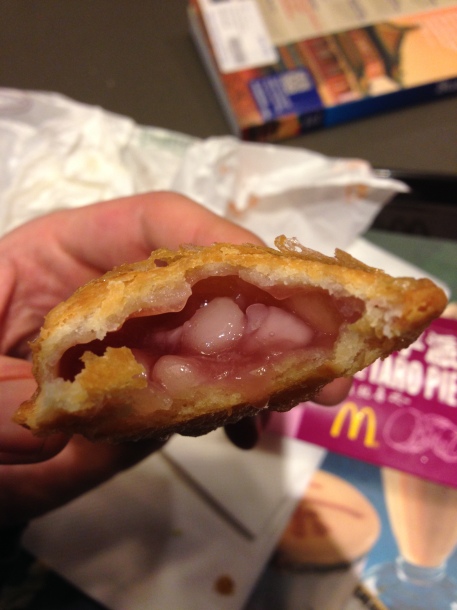 It’s going on the list of foods they need to bring to the US along with the chicken tikka sandwich from Subway shops in England.  Once we figured out where to go, we decided to visit the Donghuamen (东华门) night market .  It was a bit hard to find, but it’s by Wangfujing metro station.  We stopped for a traditional Beijing beverage/food called nai lao.  It’s basically Chinese yogurt you can drink through a straw out of these small porcelain jugs. 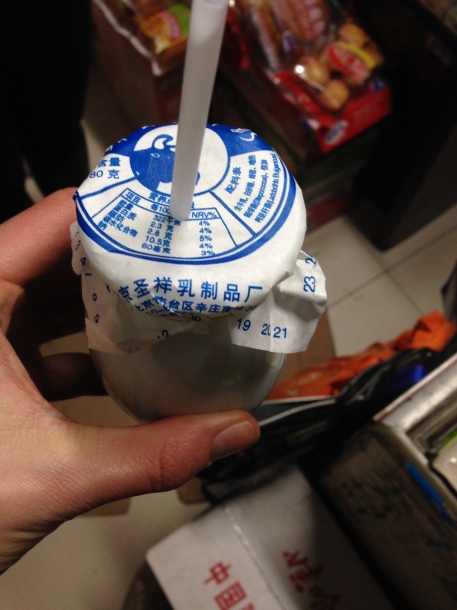 They’re everywhere, and you pay about 80 cents to stand there and drink it.  We were in a tiny convenience store that could have doubled as a closet, but the old couple that ran it were very friendly while we were standing there and slurping the sweet yogurt.

After some wanderings, we eventually found the market. 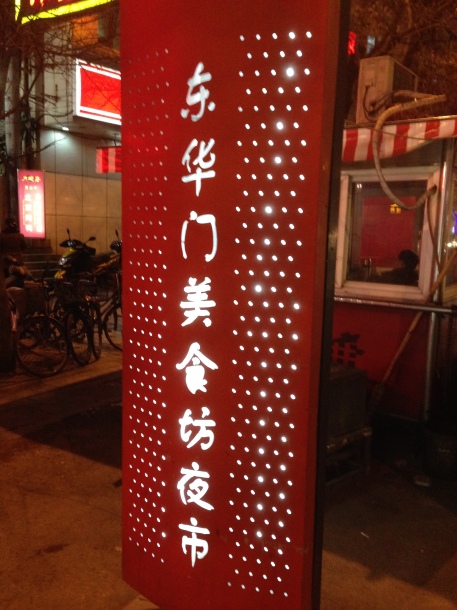 My own Elysian fields

You can’t miss it with it’s red lanterns and seemingly endless array of bizarre foods such as scorpions, snakes, lizards, testicles, starfish, goat penis, and spiders to name a few.

There are also more normal options like dumplings (amazing designs as shown below), corn dogs, and even fried ice cream!

I, however, went for the gusto immediately with a starfish. 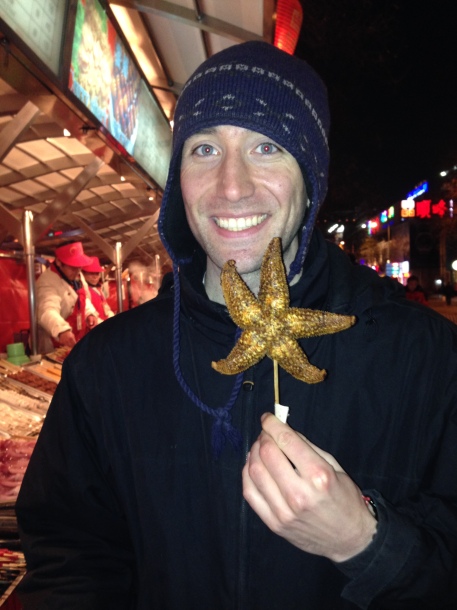 It was absolutely terrible.  Imagine taking food, burning it to a crisp, shaping it into a star, and serving it on a stick.  I ate about 3/4ths of it before I gave up.  It was gross through and through.  I moved on to a much more appetizing prospect in the form of a spider.

This was a million times better than the starfish.  I don’t know if it was the savory seasoning he put on it, or the fact there was a bit of meat to the spider after crunching through the exoskeleton. 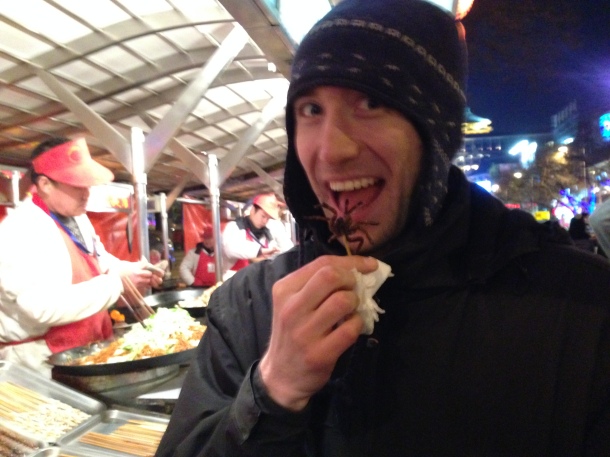 Either way, I followed it up with a giant centipede which immediately fell into the same category as the starfish.  It was just as bad, but I think the guy over-salted it after frying it. 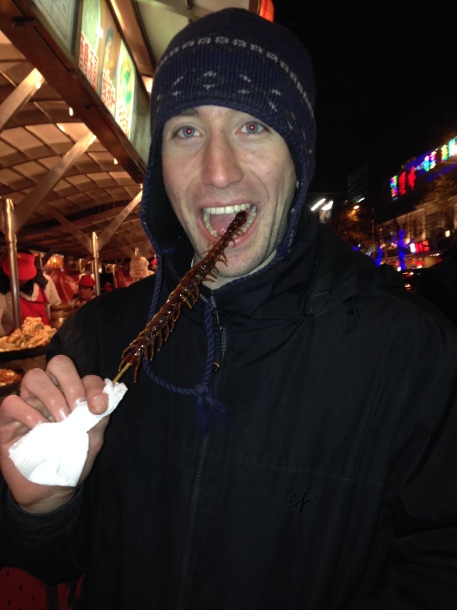 So it tasted like I was chugging a salt shaker while eating a lot of crunchy legs and gooey body segments.  If you haven’t vomited all over your computer at this point, I don’t eat anything else weird in this post.  I instead got something a bit sweeter that is another Beijing staple:  糖葫芦 or tanghulu.  At first, I was looking at the fruit a bit sideways because it looked like they were all frozen in ice. 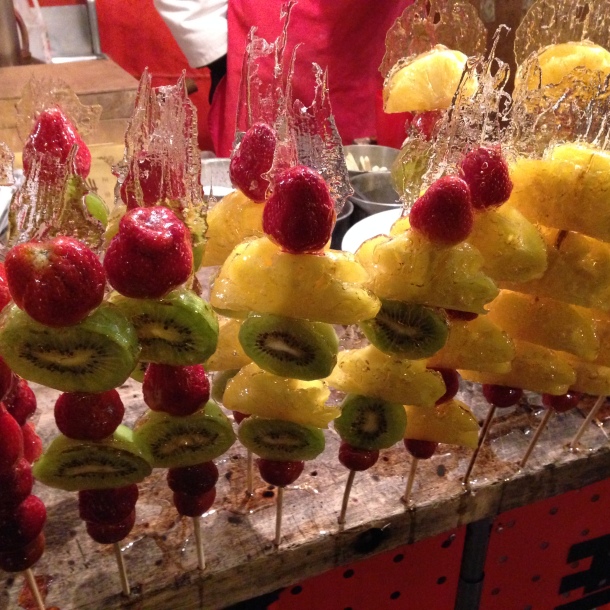 I naturally assumed that since my hands were quickly becoming ice blocks compliments of the lovely northern Chinese winter.  I was sorely mistaken though as it turns out the ice is actually a hardened sugar coating that the vendors dip the skewers of apples, kiwi slices, pineapple bits, and grapes in before serving.  I went with a Chinese grape skewer, and it was the opposite of my extreme foods.

It was insanely sweet to the point of it almost hurting my teeth.  I think if I got the apples or the intriguing sesame seed stuffed apples, it would have been better.  I’d recommend trying at least one skewer though since they’re literally everywhere much like the yogurt bottles.  I have to add a slight caveat to Donghuamen Market though.  It seemed like a bit of a tourist trap.  I found there were other more local markets serving the same fare for slightly lower prices.  Just my two cents.   After all of that strenuous eating and walking for miles, we went to a Belgian beer bar called Beer Mania.  It was a cozy little party place that had a vast array of Belgian beers that almost made me think I was back in Brussels kicking it in the Delirium Tremens bar.  The only downside was the live music was ear-splittingly loud.  Thankfully they gave up playing after ten minutes of being ignored, so we could enjoy our beer in peace.  I went with a Guillotine which ended up being a pretty bold pale ale from Belgium. 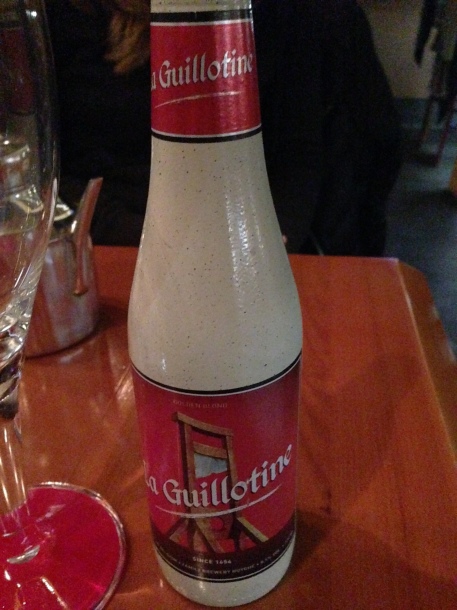 It had a slightly apple aroma which then transitioned into a sweet introductory taste that packed a bitter aftertaste punch right in the tastebuds.  After that one brew, we were both pretty tired after walking around all day, so we called it a night.  I was quite satisfied with the night since I could knock off so many food challenges by just moving from left to right about 15 feet.  What a country!