Hey everyone!  Sorry for the long hiatus on the posts, but I have just returned after a whirlwind adventure through the Far East for the Korean Thanksgiving holiday.  During my travels, I sampled many different foods that ranged from the more standard fare to the downright bizarre and frightening at times.  Today I will be talking about the first day of foods that I sampled when I touched down in Hong Kong.

As soon as I got settled in my hostel, I asked the front desk where I could eat some good snake.  They directed me to the Sogo department store because they thought I meant, “snack”.  I clarified by making a sidewinding motion with my hands, and their eyes lit up with a mixture of excitement and slight bewilderment at the fact that a foreigner would want to search out such a food not normally served for western palates.  Either way, they gave me the address of a place called Lee Kum Kee which is located in Central outside of the Causeway Bay metro station a little bit north of the intersection of Percival and Lockhart Road.

Before I even entered, I saw it was one of the few shops on the block that didn’t have any English on the front of it and had various types of cooked game hanging from hooks in the front window.

Time to go into the unknown.

As soon as I stepped in the room, the whole place somewhat stopped to see the foreigner who was foolish enough to wander into a locals only place.  However, they were very cordial and gave me an English menu.  If you don’t like being hustled about or are claustrophobic, don’t come to this place because I was put at a table with strangers since there was no room anywhere else in the dining room. 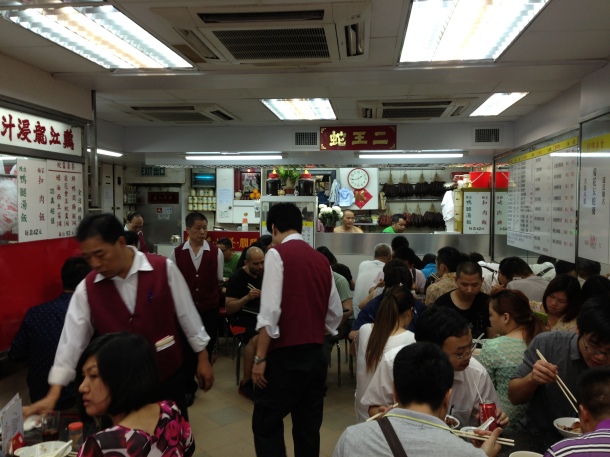 I showed them that I wanted the snake soup (60 HK), and they were even more incredulous that I was going for the gusto after intruding their little culinary sanctuary.  When it came out, I was surprised at how it looked.  I was expecting some skin or at least some scales, but it looked more like egg drop soup garnished with pita chips, lotus petals, and grass.

However, I realized it must be snake soup when I saw them butchering some serpents in the back, and the actual meat didn’t look like beef or pork or chicken.  Overall, it was pretty tasty.  I would liken the taste of the meat to chicken even though it didn’t look like it, and I really enjoyed the texture variants with the crunchy, fried pieces of bread and reedy lemongrass that gave the soup a slight tang with every spoonful.  While I was enjoying my soup, a new group of three customers sat down at my table during the lunch rush, and they were looking at what I was eating.  The biggest guy of the group introduced himself and his friends as Chinese nationals from Guangdong province who work in Hong Kong for the day, and they were surprised to not only see me there but also how well I ate with chopsticks.  They were really friendly though and offered me some of their steamed, tennis-ball yellow Hainan chicken which was extremely succulent.  The bowl of soup wasn’t enough, so I also ordered a bowl of barbecued pork and beef over steamed rice with a free side of broccoli greens (40 HK). 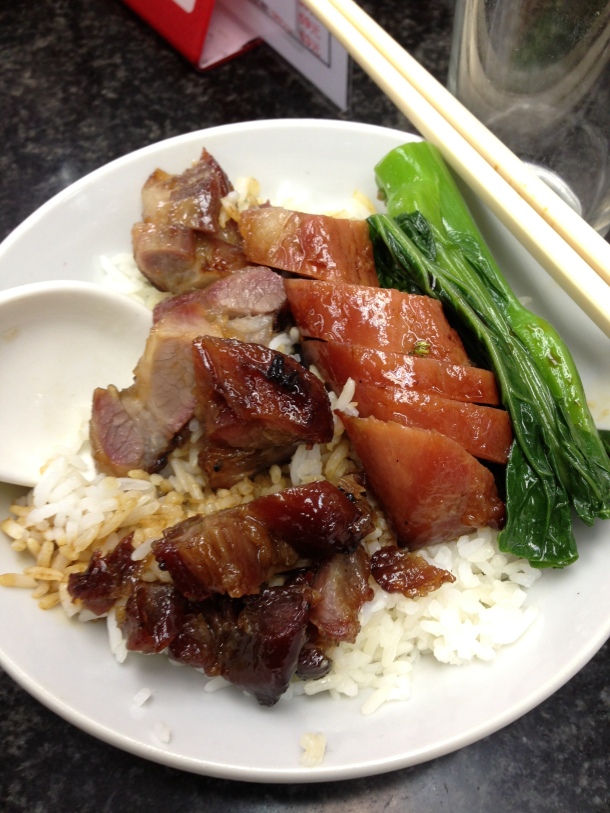 My word.  The Hong Kong locals know how to live high on the hog because the pork stole the show with it’s crunchy, carmel brown, sweet skin which encased a savory interior that was the right level of salty that would be balanced out by the rice.  I couldn’t help myself from scarfing at down because I haven’t had that sort of sweet barbecue since leaving the States for Korea.

Moving on from there, I had to get something to drink since the hot cup of Hong Kong tea really didn’t quench my thirst since it was at least 95 F outside and humid.  So I went into a convenience store to get a bottle of fruit spike tea (8 HK).

I don’t really know what they really were trying to say, but it was a very herbal tea that could fall into the range of Chinese herbal medicine.  It’s not as enjoyable as a Lipton Brisk ice tea or anything like that, but it was cold and more traditional which did the job for me.  Finally, there was the matter of dessert.  I eventually saw a line of Chinese customers lined up around the block at this place that was advertised in Chinese, but then below it it said, “Super Bowl Snack”. 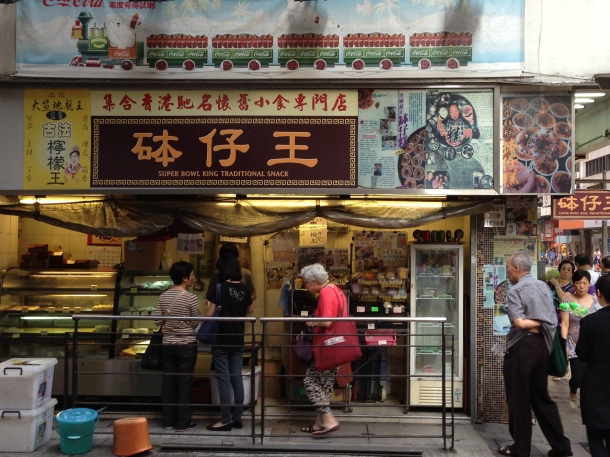 This place needs no cheerleaders.

I didn’t see any footballs around, but it must be popular enough to have a line long enough as one of John Madden’s signature/hilarious ramblings.  When I came up to the counter, I got one “super bowl” (6 HK), and the guy used a bowl to stick two sticks into the substance while putting another bowl over it and flipping it to remove it from the original bowl.  I would have thought it was going to be cold since he was taking the bowls out of a cooler, but it was piping hot. 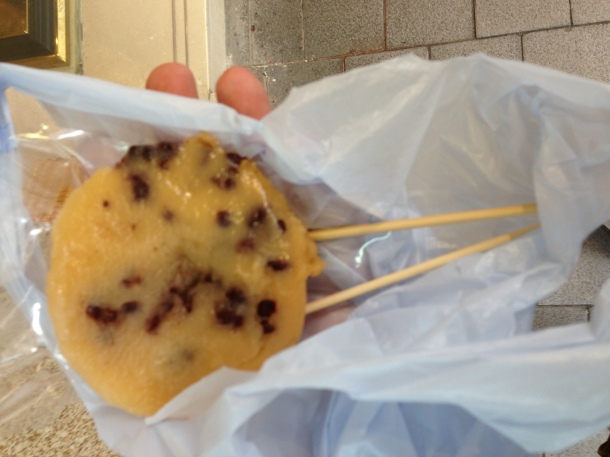 I thought it would be chocolate, but I ran into my old nemesis:  red beans.  This dessert ended up being some sort of gelatinous dough that contained tons of red beans.  Needless to say, I took a couple hearty bites but couldn’t go any further.  At least everything else I had was delicious.  Then there was dinner.

I made a friend at the hostel, Tom, earlier in the day, so he became my travel buddy for my stay in Hong Kong.  Before going out in Lan Kwai Fung, the party center of Hong Kong, we went out to Zhong Guo Song which is right off Lan Kwai Fung on Wo On Lane.

Just look for yellow and green.

They advertised healthier Chinese food with no MSG and less oil.  Tom and I both went for the Yongzhou rice (40 HK), but I got the Thai spice ribs (65 HK) while he got the orange spice chicken. 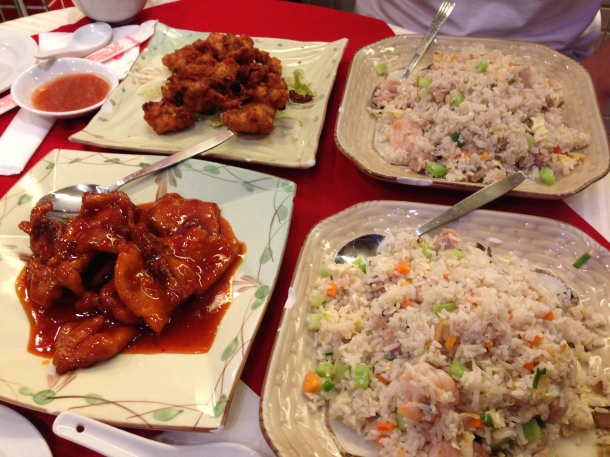 All of it was fantastic and tasted like they lived up to their promise of no MSG and less oil.  The ribs were delectable since the sauce actually had a bit of a peppery bite to each bite, but the downside was that there were random bony pieces with no meat on them.  Tom’s chicken had less bones, and the orange sauce was like eating orange chicken back home at Panda Express.  As for the rice, it was a fried rice which contained plump shrimp, scallions, egg, peas, and carrots.  We were properly stuffed by the end of the amazing meal which was a reflection of the fun time we had later that night watching the United match followed by bar hopping down Lan Kwai Fung.

So to recap day one, I’d recommend snake at Lee Kum Kee, great Cantonese food at Zhong Guo Song, and stay away from super bowl desserts unless you really like red beans.  Coming up next, I finally grapple with the stinky durian fruit and try a Hong Kong fusion breakfast.