BARKBARKWOWOFOFUFFUFUFWOOFFBARKBARK!!!!!!!  We awoke in Costa Rica on day five of our vacation to the calming sound of a loudly barking pack of dogs at 5 am.  We had made friends with them the night before when we arrived at Kenaki Lounge, so I would have thought that they would have at least kept the woofing to a minimum before 8 am.

So friendly at night.

Instead, we found that the entire pooch army had encamped right outside our door with the big Great Dane literally like a giant rock wedged up against our sliding door.  With a bit of finesse and good humor, we got the big guy out of the way, and he greeted me with a smooch. 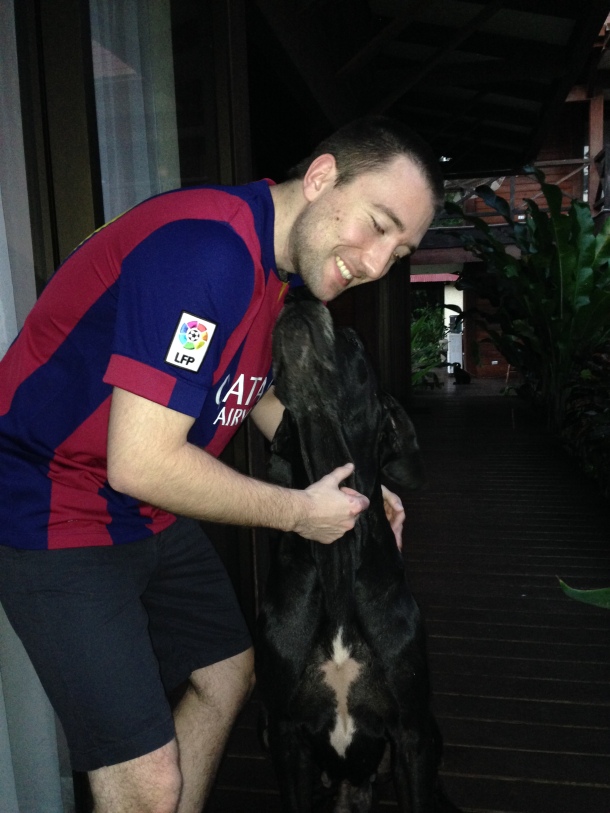 The sun hadn’t risen yet, but our lodging was quite luscious in the daytime.

We set out to see the beach that was right across the dirt road in front of our hotel, and after a bit of bushwhacking through some mud and palm trees, we finally managed to reach the Caribbean Sea. 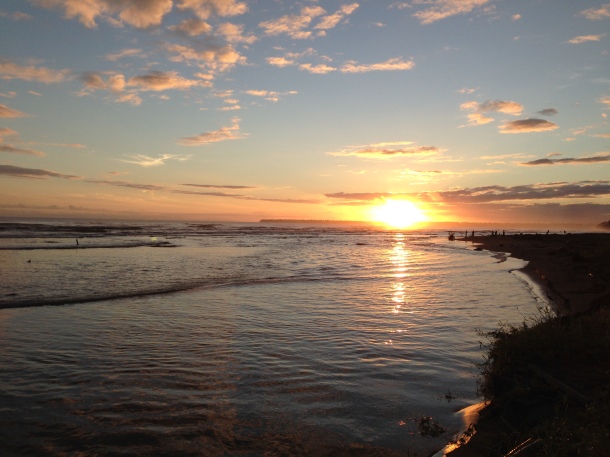 The sunrise was absolutely beautiful; I really couldn’t say that about the beach.  Compared to the clear, sapphire waters on the Pacific side of Costa Rica, the turgid waters were silty and poo colored like the sand on our sandals.  It was more jungle-esque with more bugs too, but both were pretty in their own unique ways.  After walking back, we managed to find a normal path that we could have taken initially instead of jumping over soggy, muddy ditches.  We arrived back at our room to be summoned for a fresh breakfast of fruit and gallo pinto, of course, to be eaten on the deck in the open air.

Our view over breakfast 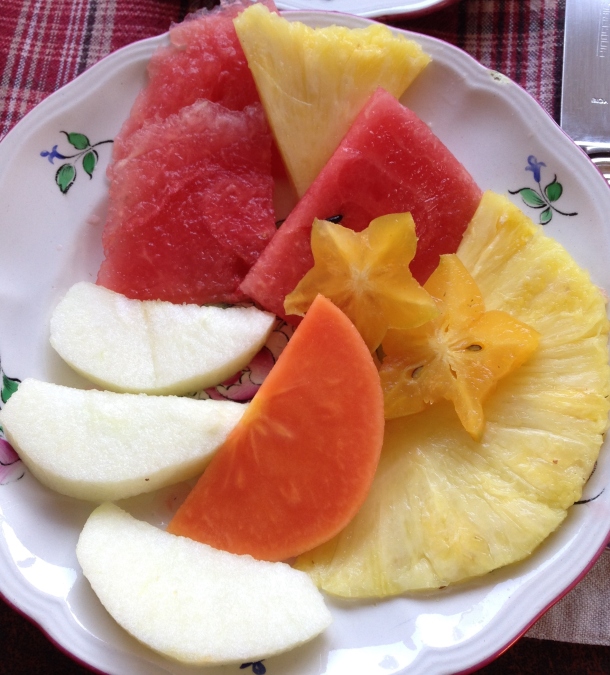 The starfruit were my favorite additions to the fruit plate since they were juicy yet sour which provided a nice contrast to the juicy watermelon and sweet pineapple.   On the side, we had a hot cup of tea along with a mix of papaya and orange juice.

Normally, I’m not a huge fan of papaya (the orange slice on the fruit plate) since it doesn’t really taste like much aside from the occasional hint of fecal matter.  I know it sounds odd, but that’s just my impression of it.  By the time we were chowing down on the last delicious remnants of our breakfast, our driver Rigoberto had arrived to whisk us to what we had been waiting for the entire trip:  the sloth sanctuary!!  When we arrived, we could hardly contain our excitement as everything sloth was surrounding us (even the road signs). 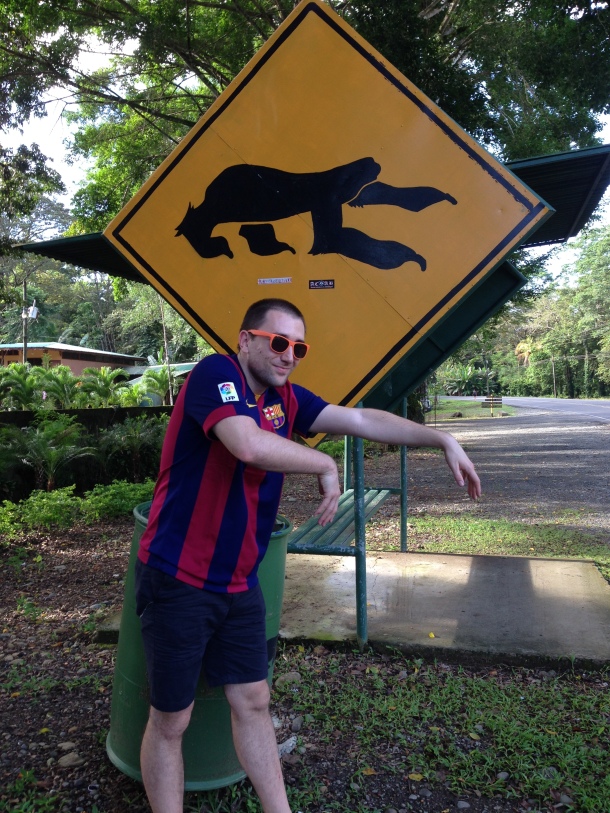 Our first close encounter with one of the slow creatures was with Buttercup; the local sloth diva that I ate fruit with before Janice broke down like a fan-girl. 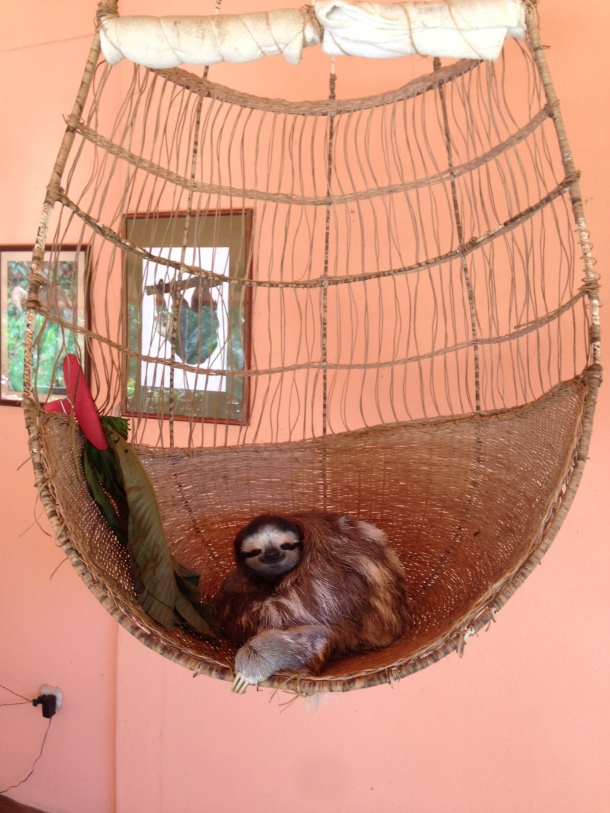 We went on a canoe ride throughout the neighboring lagoon complete with pooping and screaming howler monkeys whose hoots echoed through the thick jungle air.  We then experienced such highlights like meeting baby sloths, feeding two toed sloths, and shaking hands with three toed sloths.

Some fun facts we learned about the sloths include:  they’re related to armadillos and anteaters; they’re cold blooded mammals; and they can move as fast as an average human jogging if necessary.  Sadly, we eventually had to leave the wonderful paradise, but that meant that Rigoberto was going to bring us to a great Costa Rican restaurant that served food that was grilled right in front of your eyes.  Unfortunately, when we got there, the guy waved us away, but it was a blessing in disguise.  We went across the street to another Costa Rican greasy spoon diner called “Soda El Oasis“.

It looked a world away from the first soda we went to given that everything looked spotless from the walls to the silverware even though it was in the middle of a small town called Pocora.

Looking over the menu, which was just a whiteboard on the wall, I went for an order of carne ahumada (smoked meat), a cheese empanada, and a blackberry milkshake. 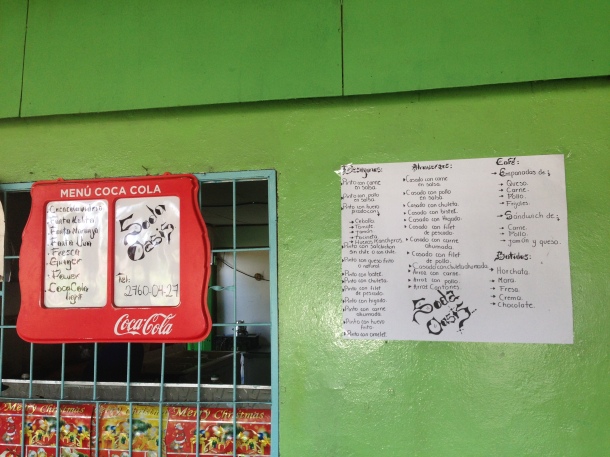 Janice got arroz con pollo (chicken with rice), and it was absolutely mind-blowing.  I don’t know if it was the spices, or the way they fried the rice, but it made me wish I got a side order of it.  As for my plate, the meat was off the hook or perhaps the grill with the wood-smoked flavor that thoroughly permeated every juicy bite. 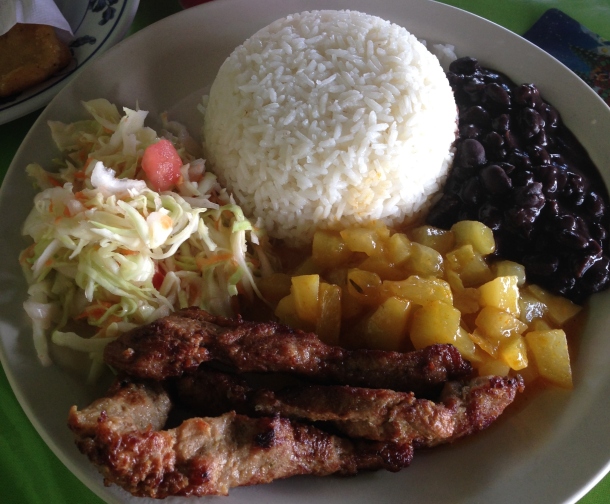 The casado combined with the chayote mixed very well with the pork, and the light, mixed salad on the side countered the heartier half of the plate.  As for the empanada, it was a semi-fail since they gave me a chicken one instead of cheese.

It was good but not great by comparison to the rest of the meal.  Once we finally completed the long trek back to San Jose and bid farewell to good, ol’ Rigoberto, we decided to descend into the madness that was downtown San Jose in the middle of rush hour.  Our cab driver was trying his best to make his way through the chaotic and severely congested streets as hordes of people streamed past our windows and a thick blanket of exhaust wafted through my nostrils.  Eventually, we arrived at the main cathedral in the heart of San Jose.  It was rebuilt after an earthquake according to a security guard who proceeded to give me an entire history of the site after I crossed myself upon leaving.  We also saw the National Theater and the Central Market located on Avenida Central.

It was super busy like everywhere else in the area and was pickpocket central, so be wary with your possessions when walking through the masses.  We hit up a local bakery to get some pastries for next day’s breakfast, and I couldn’t wait to try them.  It made me even hungrier by the time we got back to the condo.  Word on the street was that La Casa de Mi Abuela (My Grandmother’s House in Spanish) was the place to eat at in San Jose, and strangely enough it was run by an expat Canadian.  It was in a strip mall nearby our timeshare that seemed quite abandoned, but the exploration was worth it.

We were the only people in the restaurant, so we got extremely personal service. 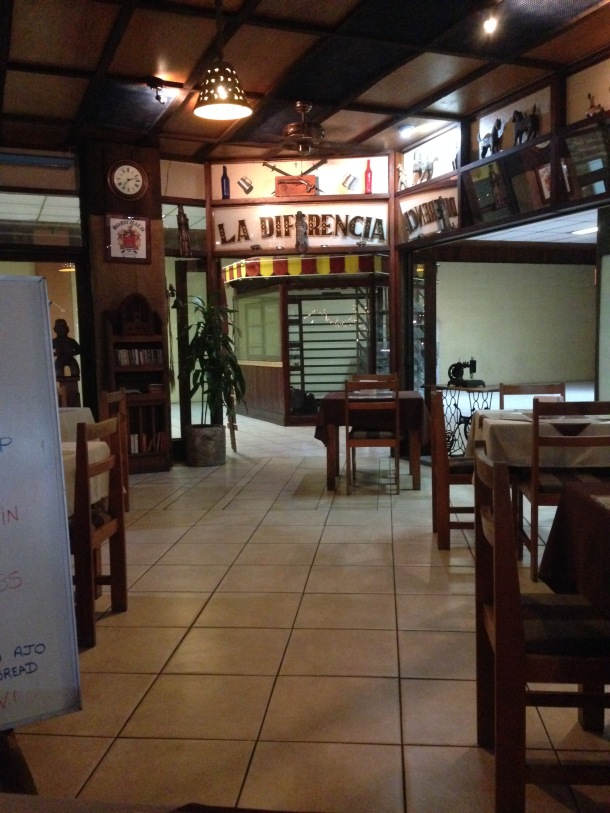 Turns out the owner was originally from New Brunswick, but it seems that the pura vida lifestyle called him back.  He was super friendly and polite like all Canadians I’ve met which was one of many pluses for this establishment. 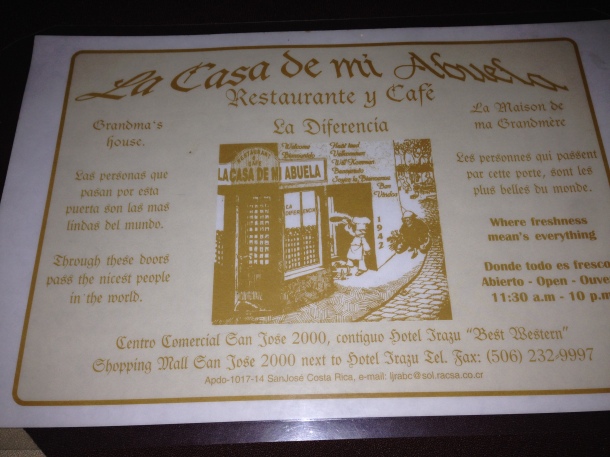 I was quickly acquainted with the only downside of the restaurant:  the bathroom.  It was the dirtiest thing in probably the whole of Costa Rica as the owner winced when I asked him where it was.  He handed me a bottle of hand sanitizer, and bade me the best of luck.  Goody.  I undid the lock on the bathroom door (always promising), walked in, and it looked like I was going to get shanked if I didn’t do my business fast enough.  I hustled, and returned to order my meal.  Out of all of the small places throughout Costa Rica we went to, that bathroom was the dirtiest place we saw, and we went to small truck stop bathrooms in the jungle.  Bathroom antics aside, I got an order of the ribs with a glass of guanabana and blackberry juice.  Janice got the homemade pork sausages with mixed veggies and hand-ground mustard sauce.  While waiting for our meat to be grilled on the griddle out front, 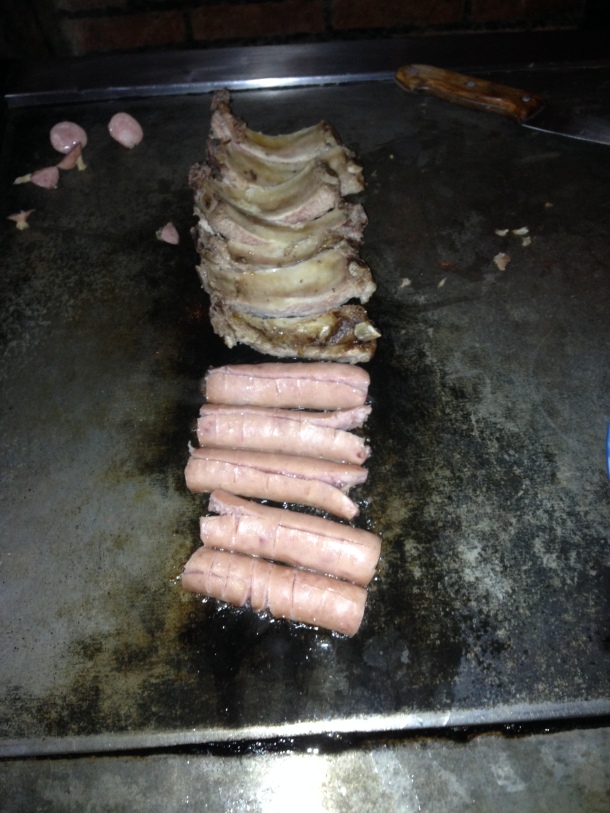 we were treated to some complimentary garlic bread, rice, Nicaraguan red beans, and a homemade spicy sauce.  Everything was delicious, including the beans and rice. 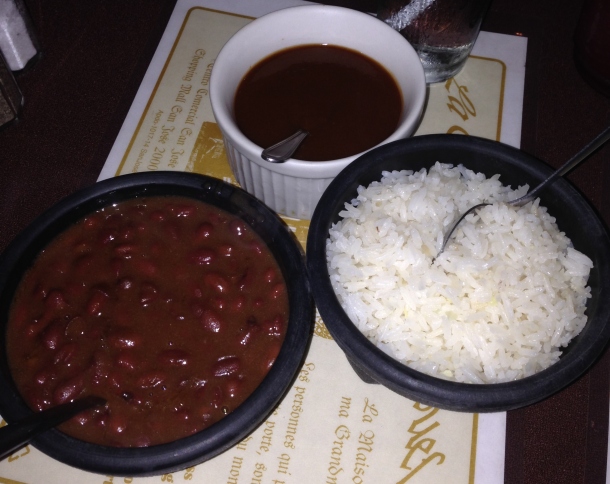 Surprisingly, we weren’t sick of them because they were different than the typical black beans of the casado or kidney beans in gallo pinto, but rather they were bigger and slightly harder.  Plus, the spicy sauce was a slighty sweet and smoky bbq flourish that I was digging.  The garlic bread was sliced into irregular squares, but the owner went hard on the garlic cloves and the butter. I was in heaven.

The party really got started when I asked the owner if he had any guaro or sugar cane liquor, the local alcoholic beverage of choice.  He gave me another sideways look and just matter-of-factly asked, “Why?”.  I responded that I just wanted to try it, so he brought out two shot glasses.  He bade us luck, and I took it down while Janice sipped it.

I would liken it to a slightly sweet, slightly watered down vodka that isn’t as disgusting as Korean soju.  The owner was acting like it was Spirytus, but clearly he wasn’t of a stronger constitution like moi.  Janice also got the same drink as me, so she mixed it in with her juice.  Like vodka, it mixed very well.  Alcohol aside, the guanabana and blackberry juice was the ideal combo of sour and sweet to be paired with our savory plates that were eventually placed in front of us. 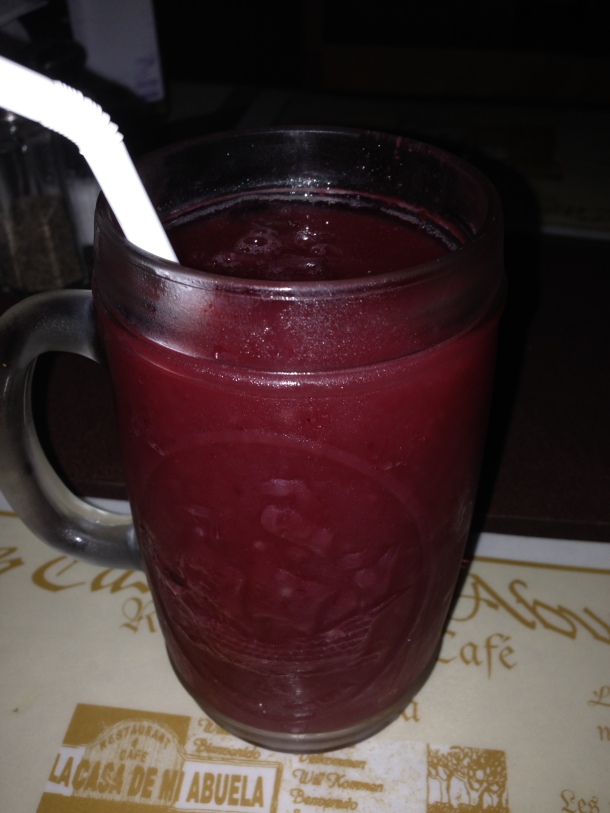 My ribs looked delectable, and I could smell the rich pork flavor wafting past my nostrils.

I took a bite, and it made me smile like a three toed sloth.  The food coma that would ensue later would make me move just as fast as they do.  I splashed some of the spicy bbq sauce from the beans and rice on top of the pork ribs, and it really gussied them up to go to the food jamboree in my stomach.  I really appreciated the ribs’ grease level since it was just the right amount that enhanced the flavor, but did not result in my hands looking like I washed my hands with baby oil.  Janice’s pork sausages by themselves were ok.

True, they had a softer casing that didn’t have a signature pop like Chicago hot dogs have, but the handground mustard sauce saved this dish.

It was a combo of Dijon and honey that enriched the pork but didn’t overwhelm my tastebuds.  The sauteed veggies on the side were competently made, but nothing really noteworthy.  By that point, we were thoroughly stuffed.  We paid the bill and made our way home looking at the stars in the darkness while holding hands hoping our trip would never end.