If you’re still reading Mastication Monologues for day 2 of our Tenerife adventures, you’re in luck because that’s exactly what’s in store for this post!  While my post for day one was action packed complete with a beach rave and us being tardy to a sardine burning party, this post is for those who are more into chill days or fans of the world’s beautiful game:  Soccer or better known as football.

We started the day off with breakfast in the hotel restaurant, and we decided to take a post-breakfast paseo or stroll to the walkway below the hotel that traced the jagged, volcanic coast of the island

with plenty of giant aloe plants,

and lizards along the way. 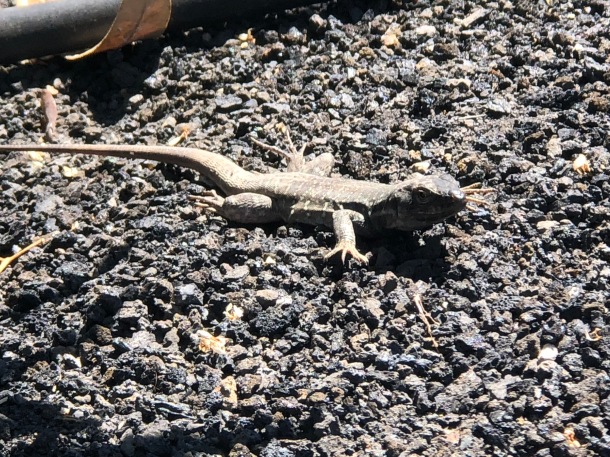 Eventually, we looked out over the alcantilados or local cliffs and saw that there was a round indentation that jutted out from the coastline and was filled with water.  Upon closer inspection, we saw that there were people walking around it and swimming by it in the ocean.  Our new plan for the day was to make it to the natural pool and swim in the ocean or bust.  This was our first foray into the very hilly main neighborhoods east of our hotel, and it turned out to be more complicated that we thought.  Since Tenerife has undergone and still is experiencing the influx of tourism, we had to navigate a labyrinth of private resort properties and small side streets to eventually find a series of stairways that led to the rocky coast line.  However, our adventure didn’t end there, we then traversed a series of giant, sloping crags to eventually reach the end of rocky shore and the natural pool.

It was a true test of marital teamwork.  As we made our way past snorkelers riding the waves while also trying not to be thrown upon the giant stones lining the shore, we were amazed at how Tenerife manages to still have pockets of wild beauty amidst the encroachment of humans.

We gazed upon the water as we prepared to dive in, and we could even see small fish flitting about under the surface before we cannonballed our way into the cold and salty Atlantic.

It was a great day of soaking up the sun and surf while swimming.  Eventually, we decided to call it a day after we began to feel like pieces of salty bacalao, and on our way back up from the natural pool we made friends with an older Italian couple.  The jolly signore and I bonded as we helped our ladies over the giant rocks, and he was surprised to find we were American.  Turns out he was retired Italian air force officer who temporarily worked with the U.S. military and lived in Huntsville, Alabama (said with his best impression of a Southern American accent), and we enjoyed a good laugh about sometimes not being able to understand some of our fellow tourists’ thick British accents.  Eventually, we parted ways at the top of the hill, and Janice and I decided to get an early dinner before the Spain vs. Morocco match.

We ended up at a small restaurant called Camber (Calle Herrador, 64, 38683 Puerto de Santiago, Santa Cruz de Tenerife, Spain) that was your typical Spanish cafeteria with terrace seating and indoor seating and a bar with tapas out for display.  We decided to sit outside to enjoy the sunny weather, but that quickly became our undoing as we were bombarded with a horde of flies that were enchanted with my saltwater-soaked jersey.  Between enraged swats, we had a lovely meal.  The first tapas that emerged were paella and the albondigas or meatballs.

The paella wasn’t as good as the one from our sunset cruise, but the sweet tomato sauce went well with the pork-based meatballs.  We then received our gambas al ajillo or garlic shrimp which was served in a way I’ve never seen before.

Instead of being grilled and tossed with garlic, they were served in a low, wide clay bowl still boiling in water and olive oil and surrounded by a plethora of sliced garlic cloves.  Although they were on the smaller end of the shrimp kingdom, they were fresh and coated in a heavenly garlic wash.  Finally, our main and muy canario entree emerged from the kitchen: choco or cuttlefish with a side of papas arrugadas or wrinkly potatoes.  Surprisingly, there were some indigenous potatoes on the islands before the Spaniards introduced the variety we were eating in the 1500s.  However, the ancient preparation of this dish hasn’t changed where they are boiled, heavily salted, and then left to dry which results in a shriveled potato with a salty crust (kind of how we felt after our Atlantic Ocean adventure).

These spuds were accompanied by traditional mojo verde and mojo rojo (pronounced “mo-ho).

The green/verde variety was more like a mild chimichurri made from parsley, cilantro, garlic, and olive oil, and the red/rojo variety was spicier since it contained paprika and small, red peppers from the neighboring island of La Palma.  I liked both of them, especially when mixed together, on the potatoes.  These sauces were eventually brought to the Caribbean where they live on in Cuban, Puerto Rican, and Dominican cuisine, and the red mojo legacy even can be seen in some spicier barbecue sauces from the American South where Spanish influence existed like Texas, Florida, and Louisiana.  As for the choco or cuttlefish, it is a very common dish as well as octopus in the Canary Islands since island nations typically love their seafood. 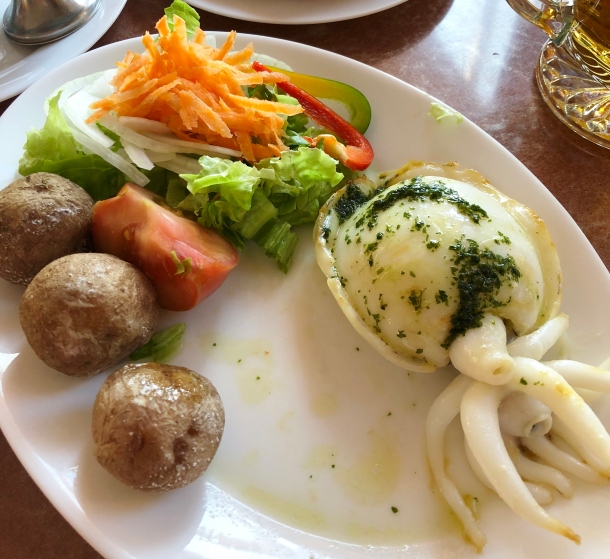 I don’t think it was the best cuttlefish in the world, but it wasn’t terrible.  I liked the green mojo that brought out more of the cuttlefish’s salty flavor, but I’m sure there are better seafood spots on the island.  Once we paid, we walked back to our hotel to change out of the fly-enticing clothes we were rocking.  On our walk back, we perused a local open-air mall for some possible souvenirs, and we found a let’s just say “suggestive” trend of suspiciously shaped bottle openers as we went from store to store. 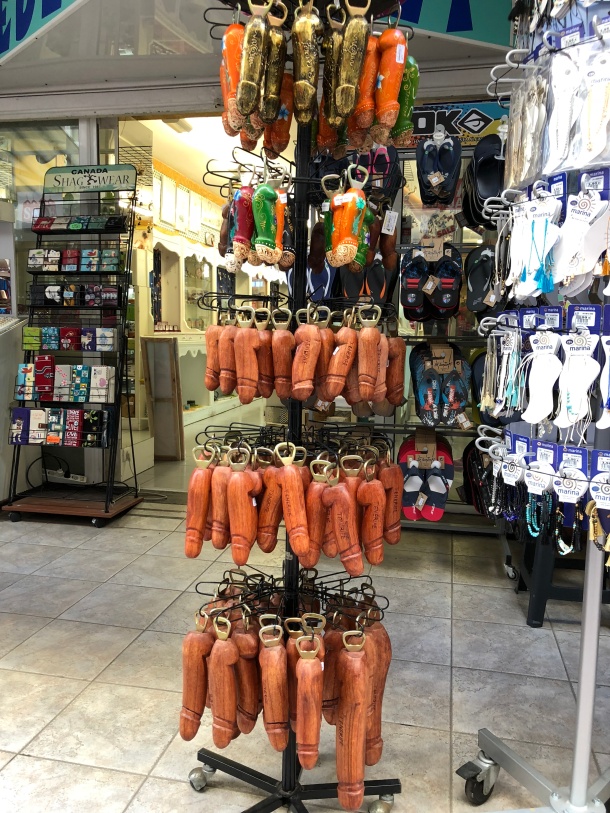 Eventually, we asked a shopkeep why there are so many of these kind of bottle openers, and he simply said, “One person sold them, and people buy them.”  Hooray for civilization!  Once we changed, we walked back up the mini-mountain to Bar Central (Av. 5º Centanario, s/n, 38683 Santiago del Teide, Santa Cruz de Tenerife, Spain).  It was similar to the Camber cafeteria, but it was soccer themed with all of the crests of Spanish futbol clubs along the top of the establishment.

As the teams took the field and the anthems played, we saw the surrounding tables fill up with patrons, some who worked at our hotel, to see the furia roja play their way to the top of the group.  As the ball began to roll, our waiter came around with free tapas (credit to Janice for the excellent portraits) including green olives, 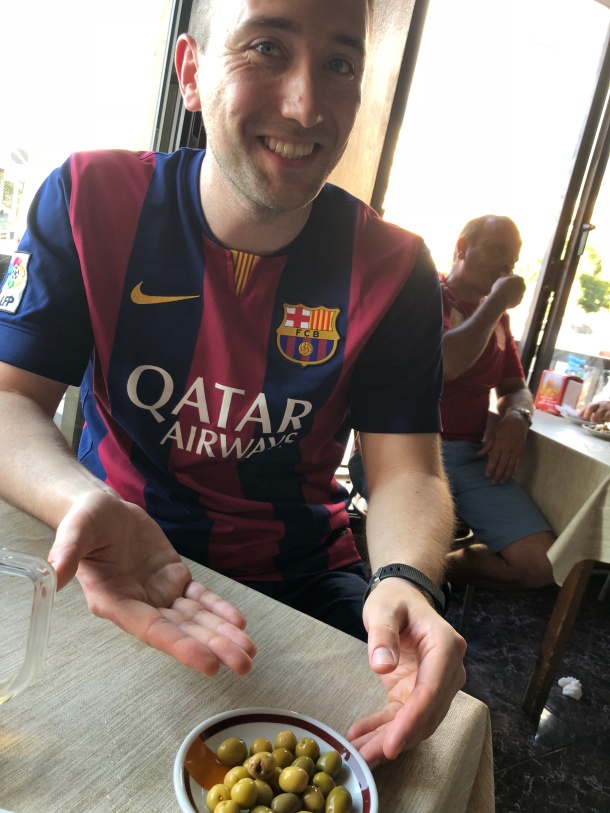 and our favorite spicy chorizo spread on the same small toasts. 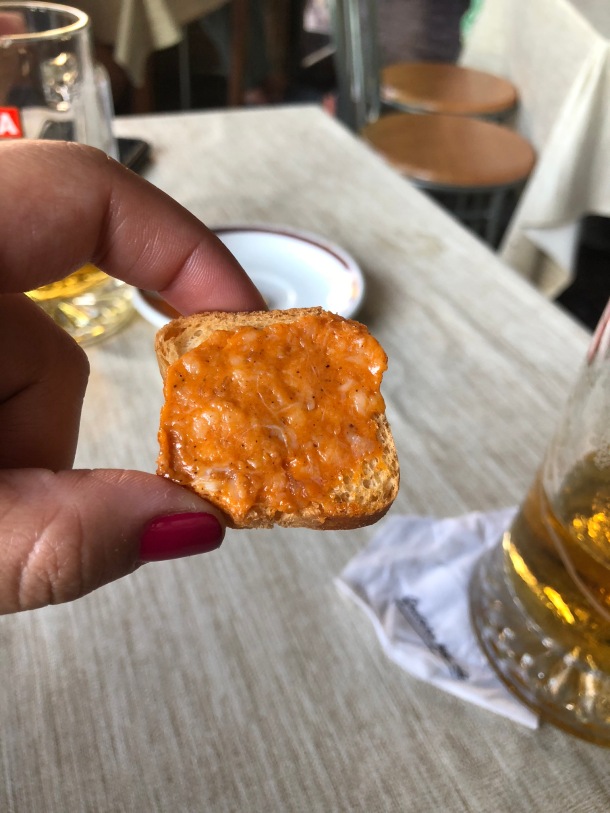 It was the perfect side to our cold Doradas and the dramatic injury time goal that brought the Spanish to the top of their group.

After all that excitement, it was calming to watch the sun set over the horizon and the beautiful island of Gomera that we would explore the following day. Stay tuned, readers!