RSS Feed
← Getting My Goat On
Food Convention Post: Taste Talks in Chicago →

Top of the Tabla

Bienvenidos a Mastication Monologues!  The weather has been absolutely perfect as of late here in Chicago, but I feel like the chill of the Fall will be here sooner rather than later.  With it, comes a longing for hearty food and more robust drinks  in terms of spices and general ingredients.  Ergo, I’d like to put forth a new restaurant review of Las Tablas, a Colombian steakhouse that gives you gargantuan portions of delicious food for reasonable prices to fortify you for Chicago’s terrible winter.

We went to this eatery earlier in the summer for one of Janice’s friends birthdays, so they were easily able to accommodate our enormous party.  The interior of the establishment was simple and some of the most eye-catching decorations were pictures on the wall of different people who seemed to have a bit of a weight problem.  These rotund subjects were signature pieces of “the most Colombian of Colombian artists”, Fernando Botero.  His unique take on artwork has created quite a following throughout the world, and it was an authentic piece of the homeland as we sat down and perused the menu.  We started with drinks.  While Las Tablas is BYOB, you can also order drinks off their menu.  We split a pitcher of sangria since it was a fun summer drink for the extremely humid night.

It wasn’t anything special though.  The wine was semi-acidic and didn’t really possess any of bold sweetness that comes from the sugar and fruit floating in the blood-red elixir.  The food, however, didn’t let us down.  They have plenty of authentic Colombian appetizers and entrees to choose from.  Even though its a steakhouse, vegetarians never fear!  They do have veggie friendly options for you.  For example, the aborrajado ($6) I got was vegetarian but not vegan friendly.  According to the menu, the aborrajado is a specialty from the coastal region of Colombia that consisted of a sweet plantain filled with guava jelly and topped with melted cheese.

While that seemed like an odd mix of ingredients, it actually jived pretty well.  Apparently, the banana was supposed to be fully fried according to Wikipedia, but my plate was semi-fried and was gooier if anything.  If you get this appetizer, let it cool off for a long time.  Although it smells like a freshly baked apple and banana pie, you will get a blazing mouthful of napalm.  Not a good look when out with friends for a fun time speaking from experience.  When I finally let it cool down enough, I found it to be a unique but tasty dish.  If you have a sweet tooth and a love for chewy, salty cheese then this is the ideal appetizer for you.  The guava and banana were a dynamic duo that teamed up with the cooked cheese on top for a sweet and salty treat.  I was semi-full after it, but I still had to choose an entree.  After looking over the numerous meat options, I got the bandeja paisa (literally:  “country tray”) ($21).  My girlfriend got a combinacion ($21) with a plantain, skirt steak, yuca, potato, and baby calamari.

When both of the plates came out, my eyes were definitely bigger than my stomach.  My girlfriend’s plate was especially eye catching with the slightly char-grilled baby octopodes (or octopi if you’re all about mixing Greek and Roman pluralizations). 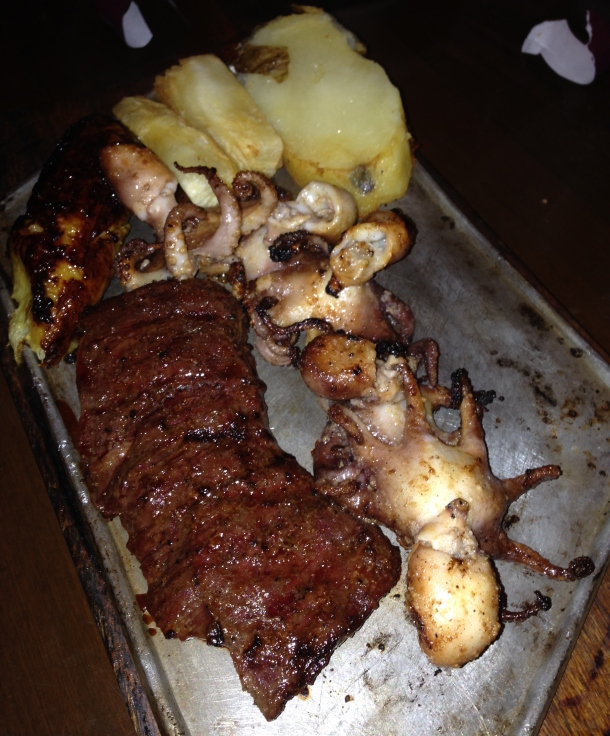 Some of them were quite chilling to look at on other peoples’ plates where they had faces similar to Edvard Munch’s The Scream.  Creepy cephalopods aside, they were quite delicious with a nice firm texture and a great charred aftertaste mixed in with the semi-buttery flesh.  As for my plate, where to begin?

First, there was the rib-eye steak.  Lord, was it perfect.  Juicy, tender, and bursting with rich, meaty flavor.  The other meat element, the fried pork belly, looked very similar to another type of bacon I tried that also tricked me in Hungary.  It was a lot harder to eat than the steak because of the tough pork skin it was attached to, but that didn’t stop me from getting my hands dirty and perhaps scaring some of my fellow diners in the process. 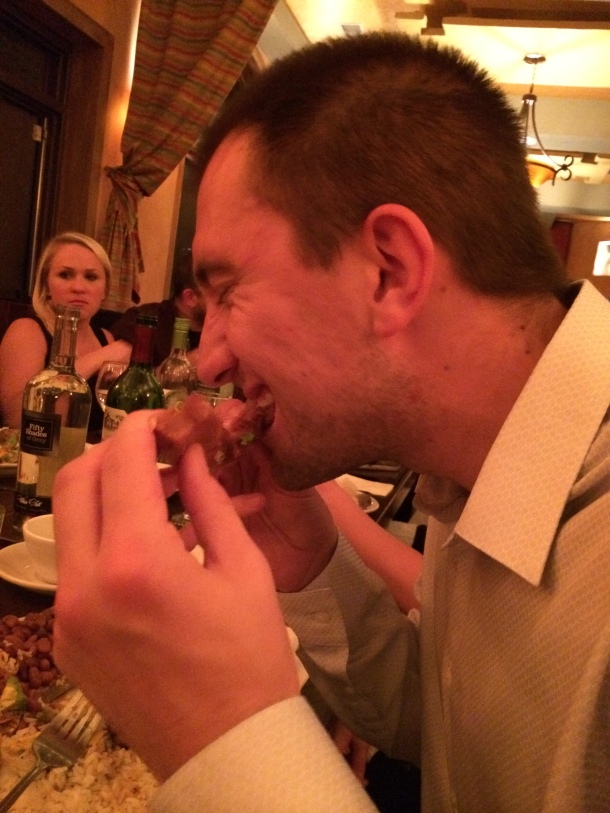 You don’t mess with a man and his bacon.  It was worth the greasy face and fingers with each nugget oozing salty and porktastic notes that were probably as addictive as Pablo Escobar’s finest wares.  The beans were ok, but they were enhanced when I mixed them in with the freshly sliced avocados, white rice (that was on the dry side), and the fried egg atop the mini rice mound.  The arepa on the side was also quite tasty since it was filled with more of the cheese that was melted on top of the aborrajado from earlier in the meal.  It was like a South American version of a Mexican quesadilla, and I’ve tangled with the Salvadorian version of an arepa on an earlier food adventure.  There was no way I was going to finish all of this food, so I threw in the towel by the time I finished all the meat, arepa, and avocados.  I couldn’t stuff myself any more with rice and beans.  In the haze of my food coma, I knew I experienced something special that night from a place I had never been to before but hope to experience one day.

Me riding home from the restaurant.

So if you want a taste of Colombia without having to hop on a plane, check out Las Tablas for some of the best steaks this side of the equator!

I'm a food lover who would like to share my many adventures throughout the culinary and geographical world. A good meal or snack can unite people from all walks of life, and new stories can be created from meetings around a table or face to face in a quiet cafe. In this blog, I will share various experiences I've had over the years, and hopefully you'll adventure outside your usual gastronomic choices to try something new and unusual. Bon Appetit, Buen Provecho, and Buon Appetito!
View all posts by Mark T »
← Getting My Goat On
Food Convention Post: Taste Talks in Chicago →