Getting My Goat On

Welcome to another chapter in the Mastication Monologues saga!  Today’s restaurant review takes us to one of the newer but highly regarded eateries in Chicago in the West Loop:  Girl and the Goat.  I had heard so many great things about famed chef, Stephanie Izard.  According to the website, “Izard is name of goat in the Pyrenees”; hence the name of the restaurant.  Looking beyond their rustic take on English on their website, their food was king or perhaps queen of the mountain.

The interior was bumping when I went there around dinnertime for a double date.

Servers were buzzing by as we checked in for our reservation.  There was a bit of a wait, so we grabbed drinks and took in the entire experience.  From the sleekly designed interior to the open cook line, it was like poetry in motion everywhere I looked.

It only whetted my appetite even more for the upcoming meal.  Eventually we were seated and the madness began.  With a tumbler of whiskey in hand, we looked over the menu to see some common items like olives or steak tartare, but then there were crazy things like duck tongues or pig face.

Mind you, the menu is on a rotating basis, so you might be privy to some dishes I never saw on the menu.  We went crazy ordering once our server came over however.  The journey began with a sun-dried tomato bread boule that came with a side of vinegar seasoned corn relish and savory butter with a garlic infusion. 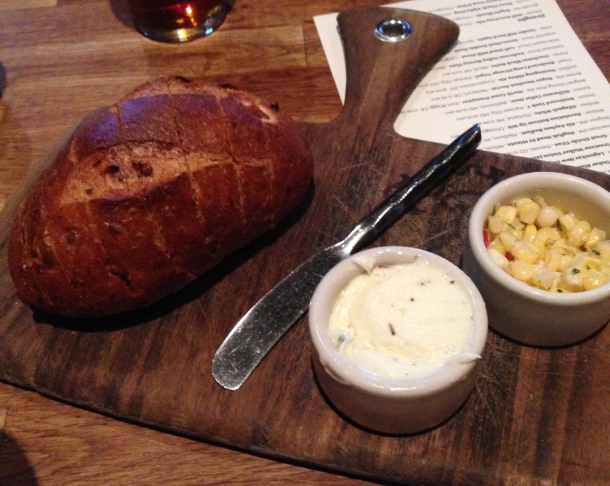 This typical carb starter got us off on the right foot as it was warm, oh-so-soft, and bursting with the taste of fresh tomatoes. 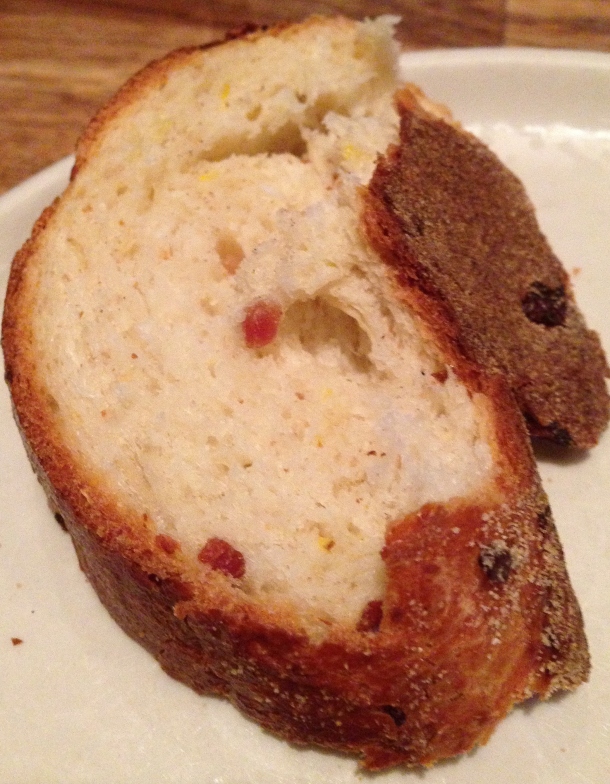 Then for actual dishes, the Girl and the Goat focus on more tapas-esque presentation and portion sizes which means that each selection is meant to be shared amongst all the people at the table.  Ergo, we ordered things that everyone wanted to try.  First, seafood.  We got the raw kusshi oysters with muscatel mignonette and tarrgon along with the wood fired blue point oysters with horseradish, bacon, and preserved lemon.

This was a historical foodie moment for me since it was the first time trying oysters.  While I heard from some people that they tasted like snot going down, I found them to slide right down without any sort of trepidation from my palate.  They didn’t need to be chewed or anything, so I don’t know what those other diners’ problems were.  I personally preferred the wood fired oysters because they were slightly warm along with a nice sinus-tickling horseradish kick.

While we were partying under the sea with the super shellfish, the steak tartare wraps came out.  If you just saw “steak” and “wrap”, the “tartare” part means that the meat was raw inside.

However, that doesn’t mean that it’s unsafe to eat.  In fact, these nibbles were quite light at delicious.  The lettuce leaves were super fresh, and the pieces of red meat were accompanied by some tempura flakes and another corn relish that provided a texture contrast to the tender steak and crunchy tempura batter.

Along with this hands-on dish, we got an order of squash blossom rangoon with wasabi garlic chive yogurt and sliced almonds ($13). 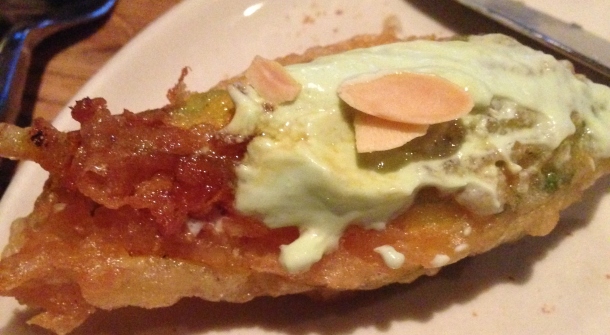 I think these fried gourds were a bit over the top with their cheesy interiors.

It seemed to simply be a high-falutin version of common jalapeno poppers, and they were quite primitive in comparison to the other dishes we tried before.  The duck tongues ($16) that came next were anything but ordinary. 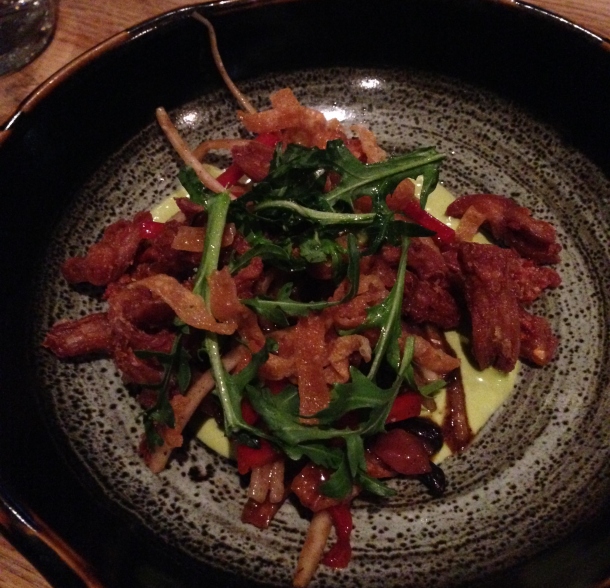 While everyone at the table was disgusted yet slightly curious when I ordered this dish, I was curious to see if it was going to be different from my experiences with duck tongues in Taiwan and China.  Lo and behold, it was since they were neither simply cooked nor still sticking in a duck’s head.  Instead, they were fried and arranged into a mini-mountain over a tuna and black bean poke that was negligible, but the spicy piri-piri bird’s eye pepper (similar to the one at Nando’s in the UK) from Mozambique really kicked these tongues up a notch in terms of flavor.  Plus, my formerly squeamish dining companions found them to be quite pleasant since they melted in your mouth and didn’t feel like you were making out with Donald Duck.  After that bizarre treat, we came back to reality with an order of ham frites ($7) with sides of smoked tomato aioli (literally: “garlic oil” in Catalan) and cheddar beer sauce.

These smoky, savory taters were finger licking good especially with the cheddar beer sauce and powdered ham that took these common bar items to a new level of haute cuisine.  If this redesigned ‘Murikan favorite got my palate amped up, the spring onion potstickers ($15) were a Far East fusion creation to cool it down.

It was served at room temperature, and the fried dough was extra delicate. 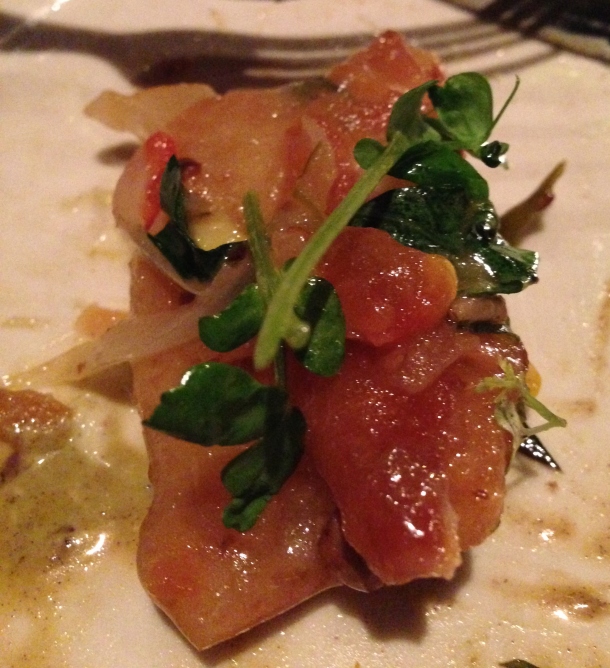 Along with that, the dandelion greens and sunflower seeds created many earthy tones as I took down each one.  All of these were leading up to the piece de resistance, the crisped braised pork shank ($25). 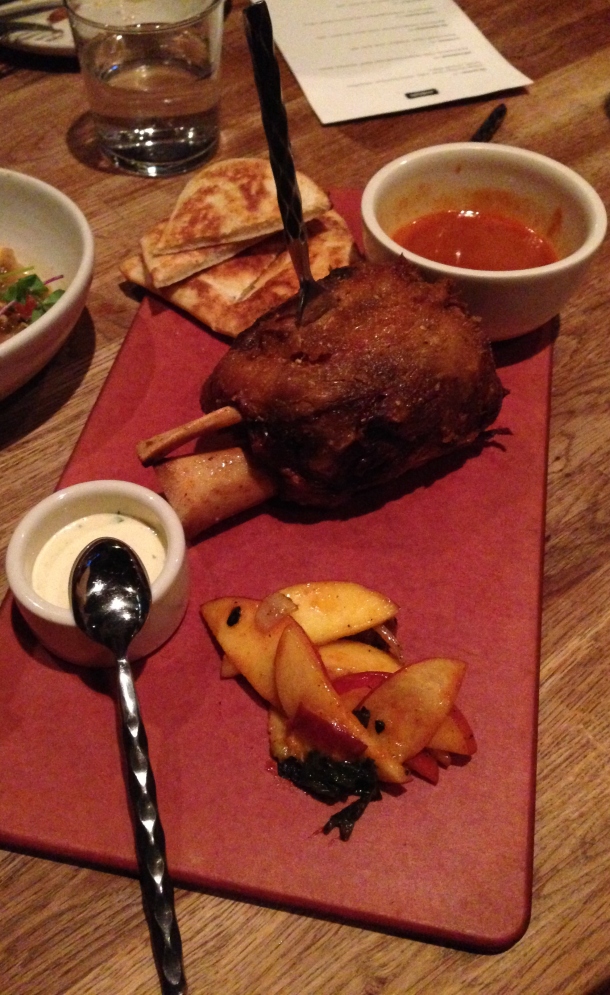 Not only was this thing monstrous, but it also came with sides I would have never expected:  Indian naan bread, buttermilk dressing, peach kimchi, and a pepper sauce.  I almost felt like young King Arthur with the sword in the stone, and I took my Excalibur with great aplomb.

The meat fell off the bone, and it was mind-blowingly succulent.  Each strand combined with the golden crispy skin to create a legendary dish that I will never forget.  The naan was fresh, but I didn’t think it really fit in with the other ingredients.  The kimchi peaches somewhat made sense since it was a sour/sweet element to cut through the savory and slightly greasy meat.  The pepper sauce was good but not great.

As if you thought this was the end to the food madness, the pork belly and scallops came out.  I tried a minuscule portion of the pork belly, and it would have been great if my stomach wasn’t stretched to bursting. 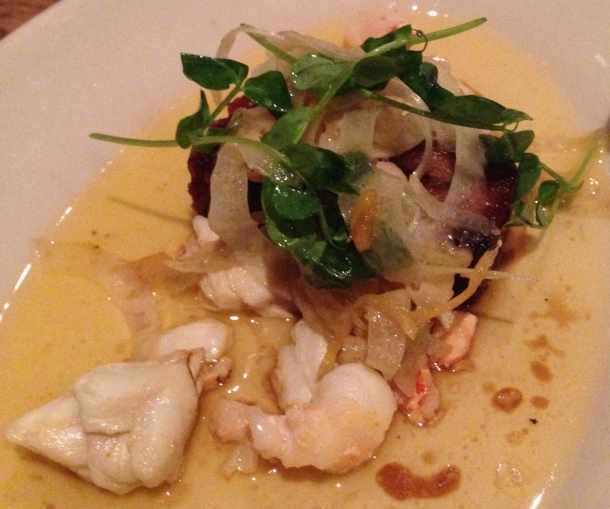 Perhaps for next time.  The lobster was quite sweet while the crab seemed to be a better compliment to the lean pork.  As for the scallops, I can’t really comment on them because I was absolutely stuffed, but their presentation was pleasing to the eye.  Plus, the scallops were quite hefty for the price.

So in closing, if you want to try one of Chicago’s most highly vaunted restaurant, bring your piggy bank and then some because it isn’t cheap.  However, it is high quality food with moderately large portions compared to other similarly prestigious eateries.   Ergo, you should get down to Girl and the Goat ASAP.

I'm a food lover who would like to share my many adventures throughout the culinary and geographical world. A good meal or snack can unite people from all walks of life, and new stories can be created from meetings around a table or face to face in a quiet cafe. In this blog, I will share various experiences I've had over the years, and hopefully you'll adventure outside your usual gastronomic choices to try something new and unusual. Bon Appetit, Buen Provecho, and Buon Appetito!
View all posts by Mark T »
← Absolute Cero
Top of the Tabla →