Finally, I have arrived at the terminus of our South Carolina adventure and not a moment too soon (six months later).  Welcome back to Mastication Monologues where I spread the word of both good food and great times!  This post is the final installment in one of my travel series, and this one was not lacking in terms of major events.  From eating at one of the finest restaurants in the Southern United States to finally asking the love of my life to be with me forever and ever, it was an exhilarating journey from beginning to end.

So, we began our final day in the Holy City with a walking tour around Charleston’s downtown area.  We bided our time looking around the gift shop which boasted plenty of Charleston’s signature golden rice and colonial porcelain, but eventually we found our tour guide, Michael Trouche.  He was in charge of Charleston Footprints Touring Company, and we would highly recommend them if you’re looking for a very informative and affordable tour of the town from a Charlestonian whose family has been there since its founding.  We learned many interesting tidbits about the houses we otherwise would have walked past none the wiser. 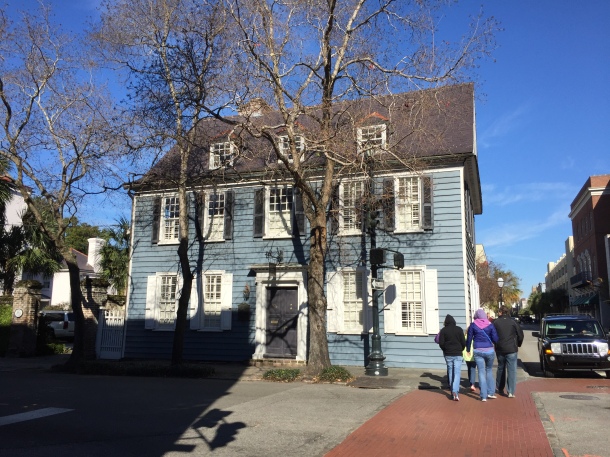 Oldest house in Charleston from the 1600s

He took us from the waterfront,

to the intimate streets where scenes from Porgy and Bess took their inspirations, 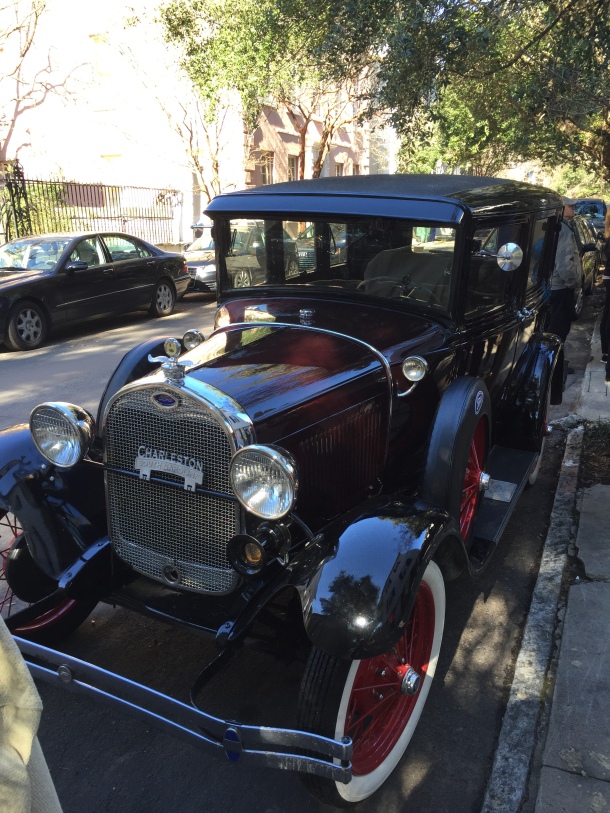 to even his family’s home that was huge yet still had that antiquated Southern charm.

He even showed us the house where Francis Marion, the real life planter and politician who Mel Gibson portrayed in the movie the Patriot, jumped from a third story balcony to the street below because he was embarrassed that he couldn’t toast to beginning a rebellion against their British overlords.  Why?  Because Marion was a teetotaler.  Even though he didn’t drink, he still managed to have fun by some how escaping the party with a broken leg on a horse and then waging a successful guerrilla war against the Crown’s troops during the war.  The most eye catching of the waterfront properties was Rainbow Row (not Road, Mario Kart fans). 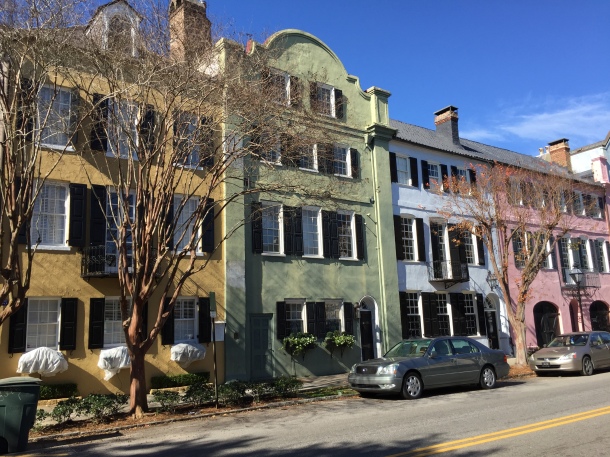 These Georgian style buildings were originally bustling warehouses and storefronts, but they fell into disrepute once the Charleston economy was devastated by the Civil War.  However, in the 1920s they were redone with Caribbean flair in the form of their present day colorful facades.  Not only do they look pretty, but they keep the buildings cool in the sweltering summers thanks to their chromatic appearances.  We also got a taste of local business as we stopped into a local antique store that had everything from paintings to moonshine and of course Janice made friends with the resident poochy!

As our tour came to an end, we had worked up a mighty hunger, and I insisted that we should try Nana’s Seafood and Soul Takeout.  I read that it had some of the best and most affordable seafood in the Lowcountry, and it lived up to the hype and then some.  It’s actually such a small place we drove past it at first and had to back it up to make sure it was the right storefront.

When we walked in, it was a much different crowd than we encountered in most of the other restaurants in Charleston. 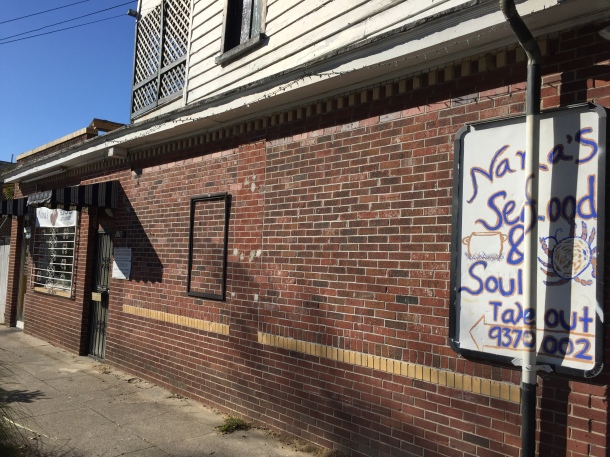 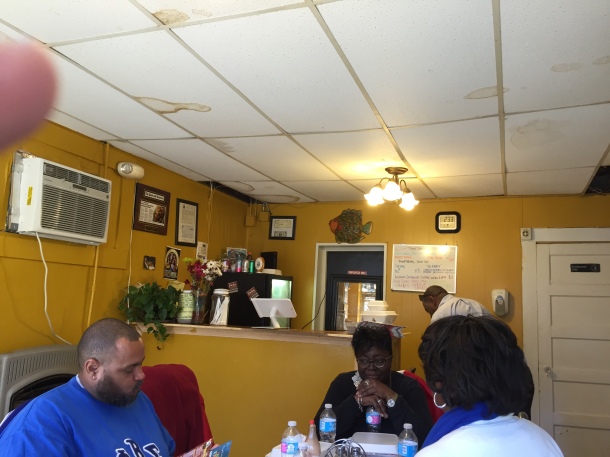 First, it was simply decorated, and it could only seat maybe 10-12 people, 20 if you really wanted to sit cheek to jowl with your fellow diners.  Second, it was exclusively African American in terms of patrons and staff aside from us, but us integrating the place didn’t stop us from having a wonderful time there.  They have mainly seafood options along with some classic chicken wings and sides for rock bottom prices and generous portions.

Need I say more?  Janice also asked if they had their famous garlic blue crabs ($18)  that they only serve when they receive them which isn’t very frequently.  As for me, I purchased their shrimp and oysters ($12).  We also talked with the owner who took our order which was a nice touch not found in many other restaurants in the US. Once we put in our orders, we took a seat at one of the small formica topped tables right next to a group of alumni from historically black fraternities and sororities and soaked in the atmosphere.  Our meals came out in carry out styrofoam containers even though we were dining in which already was a signal to me that we were in for a treat.  Janice opened hers first, and was greeted with a mountain of blue crabs which would be at least double in any other more touristy restaurant in downtown Charleston.

My shrimp and oyster lunch had a bit more variety with my crustaceans and bivalves being of the fried variety.  All of which didn’t surprise me since we were in the Dirty South, but the real rarity that came with this kind of food was the surprisingly green and fresh salad that accompanied my seafood.

Plus, I would have expected maybe some dirty rice or a helping of collard greens, but that Nana always keeps you guessing!  While we got down to business with our food, it was only the beginning of the Trump train where he was quoting the Bible and acting like a Christian who loves all people.  Funny enough, it was Martin Luther King Jr. Day when we visited, and it was funny to see that everyone in that establishment, regardless of color, knew that Trump was talking nonsense.  Hopefully that spirit carries into November this year.  Politics aside, the food was mouthwateringly good and aesthetically pleasing.  The breading on my shrimp was very light and not greasy at all, but I don’t think the oysters went too well with the fried batter since they were runnier and didn’t lend themself to being fried to perfection.  I think crab or maybe the scallops would have been a better choice.  The fries I forgot to mention kept the “heart healthy” meal keep on going, and I tried to insert some green salad between each fried mouthful.  I think my heart was still beating by the end compliments of the lettuce and cucumbers.  Let me say that don’t think I was going to get too healthy on this trip because we shared a cup of potato salad ($2). 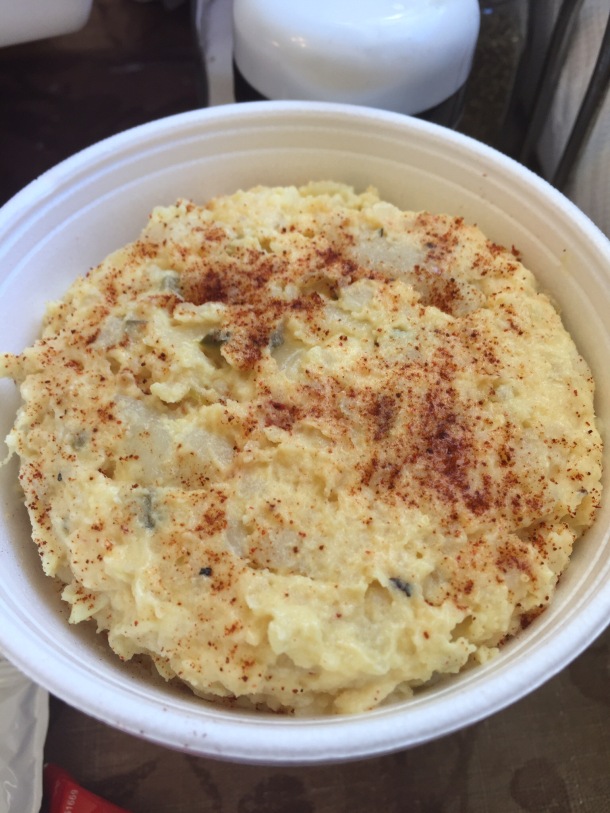 It was perfectly made with diced potatoes, plenty of mayo, and just a right amount of paprika on top. Then there was Janice’s meal.  Talk about having to work for your supper.  I never had fresh crab out of the shell before this visit, so Janice was the Master Yoda to my Luke.

Once I got the hang of it, I found the savory and garlickly meat to be worth the work.

If they have these armor plated morsels available, I’d highly recommend them.  Unfortunately, with pride comes one downfall as Janice was having trouble with a particular leg section.  So I thought I could break the shell with my fingers, which I did, but much to my chagrin the crab also sliced my thumb open.  So, I went into the bathroom in the back of the restaurant which was the definition of bare bones, but there was at least soap and water to wash the wound off.  However, we didn’t have a bandaid, so the owner ran out to her car and got me one.

Now that’s some Southern hospitality!  We actually managed to polish off our meals, and we were off to see some last highlights of Charleston. 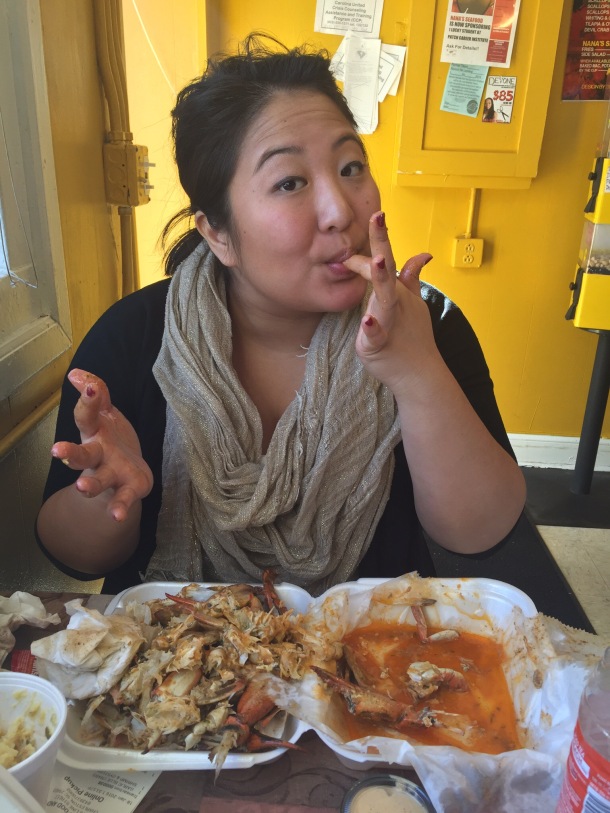 We left Nana’s with great memories, full stomachs, and a “See y’all later!”.  We moved beyond the city to the Sullivan Island beach which was covered with plenty of dead starfish for some reason.

Even though it was an all you can eat bonanza for the seagulls, it didn’t ruin the pristene beach on our perfect vacation as a newly engaged couple. 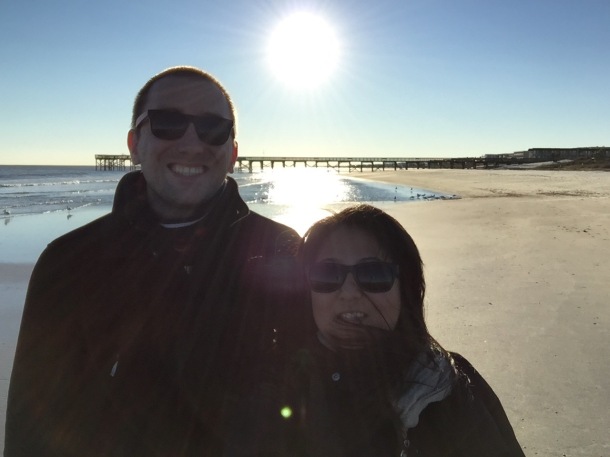 We also went to Fort Moultrie which was originally made of palmetto palm trees during the American Revolution.  Thanks to the supple nature of these native trees, the British naval cannonballs literally bounced off the walls of the rebel-defended fort.  Hence, today we have the nickname of South Carolina, “The Palmetto State”.  It was not the wooden version I was expecting, rather how the fort looked circa World War II when our servicemen had to watch out for those pesky U-boats. 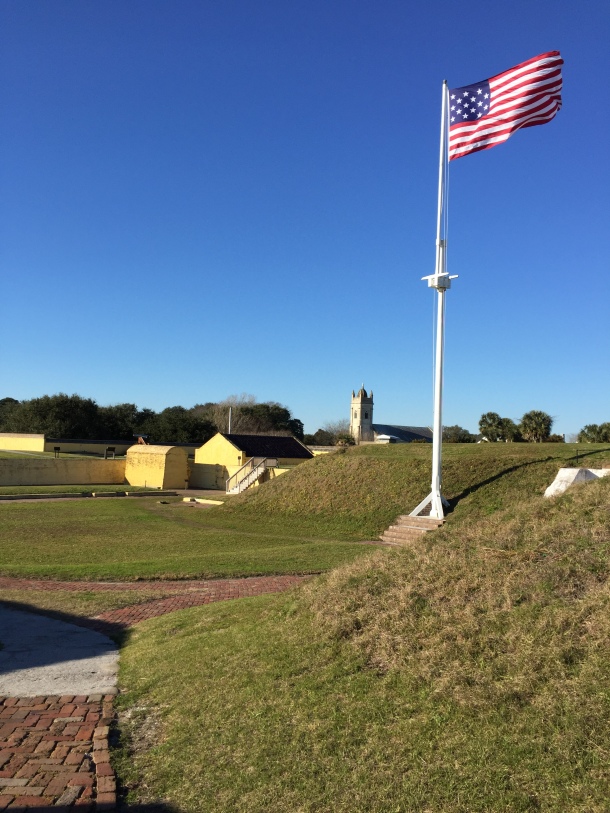 It was an ok experience looking out over the water and walking through the creepy underground bunkers,

but its not something to go out of your way for unless you’re really into history like yours truly.  Our final bite to eat was at a local chain nearby our Air BnB called the Kickin’ Chicken.

It’s like your typical laid back sit down restaurant with a focus on all things poultry with a Southern twist.

We went quite early for dinner, so the place wasn’t too kickin’.  The menu had a mix of bar food and Southern American classics like chicken and waffles.  We were more interested in their signature Kickin’ sandwiches.  Janice got the namesake sandwich ($9), and I got the Santa Fe Wrap ($9).  Clearly, the prices weren’t anything ridiculous, but we also weren’t going to go overboard since we were still stuffed from Nana’s before.  When our plates came out, we weren’t that impressed. 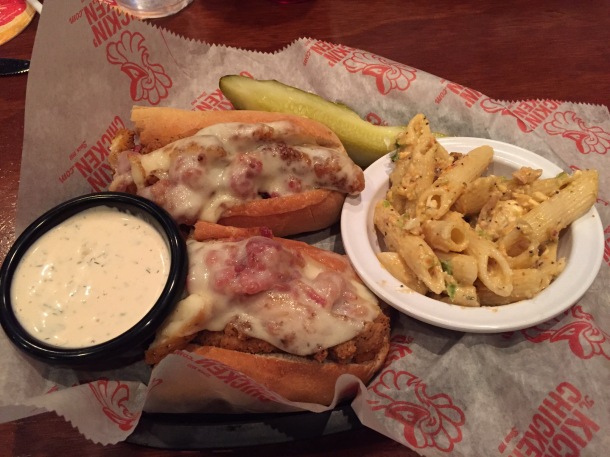 Janice’s was kind of bland with average bacon, a moderate amount of provolone cheese, and not the best chicken we had during the trip.  My Santa Fe wrap was a bit of a let down too.

It did bring the flavors of the Southwest alive with the inclusion of Tex Mex ingredients like peppers, salsa, onions, cheese, and the jalapeno cheddar wrap, but just barely above flat line.  Perhaps we would have been better off ordering the more bar food-esque options because these sandwiches left us wanting.  Once again it proved that small, family owned businesses are typically provide better quality and priced food and drinks.  Although it was the last impression we had of Charleston, it did not leave a sour taste in our mouth because it was drowned out with the great memories we made together on the road to many more in the future. 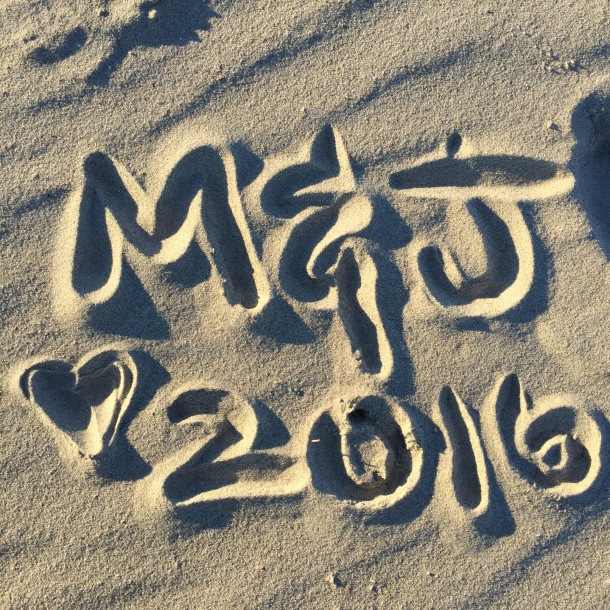 I'm a food lover who would like to share my many adventures throughout the culinary and geographical world. A good meal or snack can unite people from all walks of life, and new stories can be created from meetings around a table or face to face in a quiet cafe. In this blog, I will share various experiences I've had over the years, and hopefully you'll adventure outside your usual gastronomic choices to try something new and unusual. Bon Appetit, Buen Provecho, and Buon Appetito!
View all posts by Mark T »
← South Carolina (Day 3): Going With the Grain (Granary, Vendue House, Griffin)
San Diego (Day 1): I’m Going Back, Back To Cali (Yankee Pier, Lemonade) →