A Deli For a Happy Belly

Ah college…an idyllic time where you can enjoy every social opportunity there is for an 18-22 year old while hopefully gaining an education.  On any college campus in America, minus the dry campuses, there is always a main street where most students go to shop, eat, and get their drink on.  The last two are especially important given that nothing is better than having a great night out on the town and more importantly, getting some precious food to fill your food before, during, and/or after the shenanigans.  This past fall, I went for the first time to the Indiana University with my girlfriend and her friends, and experienced everything their campus had to offer.  I had always heard good things about Bloomington, Indiana (hard to believe given it’s in Indiana), but I never had been there.  Plus, I went to the University of Illinois at Chambana, so our schools aren’t the best of neighbors.  However, I ended up having a fantastic weekend filled with fun, friends, and especially food.

We kicked off Friday night with exploring the downtown area and visiting a popular bar called Nick’s.

Apparently they’re famous for a drinking game called Sink the Biz, or as I’ve always known it from U of Illinois, depth charge.  Basically, you try not to sink the shotglass while pouring beer into it.

The guys behind us were captivated.

Loser has to drink per usual.  Things got really rowdy when Captain Morgan showed up, but we were more into the prompt service and the good bar food like the cheese sticks, fries, and burgers.  Old people priorities, woooooo!  After that, we moved on to the Upstairs Bar where the party really jumped off.  First, there were these drinks called AMFs or Adios Mofos to keep it clean, and after tasting one I can see where the name comes from.

Take down one or two, and you might as well kiss your last functioning neurons goodbye.  If you like to dance, this was the place to be especially when Michael Jackson’s Hold Me from the classic film Free Willy came on.  It was a spiritual experience to say the least.  The rest of the night was pretty fun, but the following morning was even better.

The highlight (one of many) for our visit was the tailgate before the football game.  For the uninitiated, like myself back then, I wasn’t sure what tailgating consisted of.  Turns out it was the biggest food and drink fest of all time, but with the unpredictability of the elements thrown in.  What that meant was while we were freezing outside, we huddled around the Weber grill for warmth as bbq master Cam was slinging burgers at us. 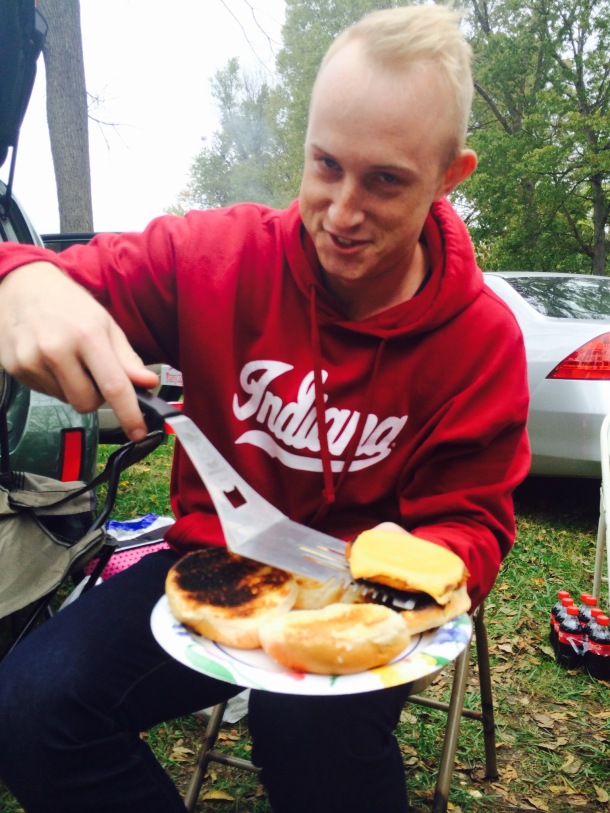 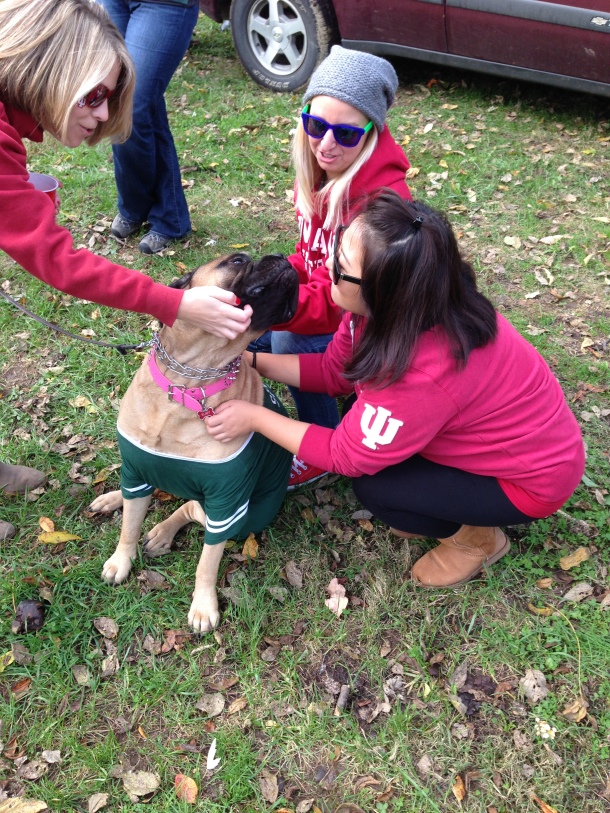 Ruby the dog is so popular

Nobody but Janice is having fun.

and getting on Buzzfeed (Check number 15).  Nbd.  Eventually we made it to the football game, and it was about as dismal as the weather.

It was so depressing that one of our friends, Amanda, basically led a mass exodus of fans out of the stadium after loudly voicing her displeasure at a terrible throw and a missed catch.  We thought about going out, but after 10 hours of straight raging, we decided to call it a night.  The following morning, however, we nursed our hangovers with a little something the girls kept calling VD.  Now, that’s something people normally try to stay away from, but in Bloomington, VD or Village Deli is the place to be on a Sunday morning.

Recently it suffered a terrible fire, but thankfully it was repaired and back in business.  I enjoyed their funky fresh paint scheme with their psychedelic paintings on the wall of celebrities, and the food looked delicious as we walked pass the packed tables.  Their menu was simple but filled with great options for pancakes, omelets, and scramblers.  They are known for their Famous, Collosal, Huge, Ginormous, Fresh Buttermilk Pancakes, so that is exactly what I got ($4.50).  You can also add up to three toppings including fresh fruit, walnuts, peanut butter chips, chocolate chips, granola, or cinnamon roll.  That last one greatly intrigued me, so I plumped for just that to see what these from scratch big boys would look like.  What came out was just as large as they were talking about.

They were literally bigger than my face and coated with cinnamon, sugar, and icing. 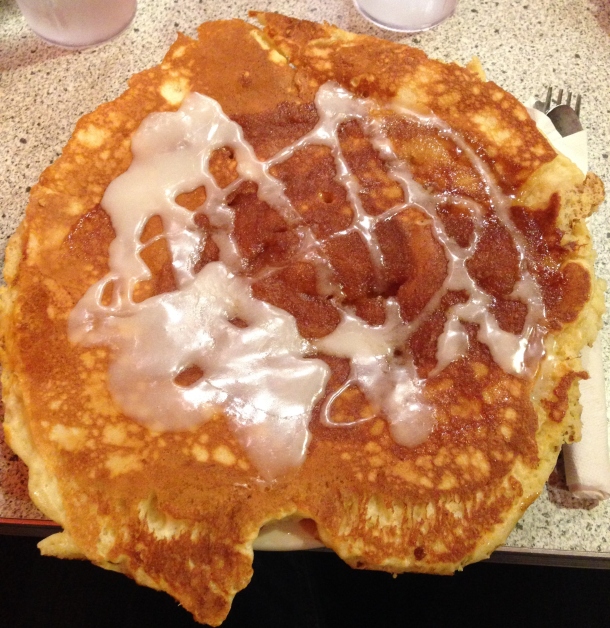 I seem to have a penchant for ordering large breadstuffs for breakfast.  I quickly got down to business since I was starving, and they were some of the best pancakes I’ve ever had.  I could tell they were made from scratch with the fluffiness of each bite coated in that sweet and slightly savory cinnamon sugar melange.  It was kicked up a notch in the diabetes column with the cinnamon roll icing, but I was back in college for a weekend.  Nothing like letting the hair down a little.  My compadres’ meals looked equally delish, but I highly recommend getting there early if you want a table and not have to wait in line for half an hour or more.  It was a satisfying end to an entertaining weekend with new friends.

To finish, I would highly recommend visiting U of Indiana and the Village Deli if you’re looking for good times and great food with even better prices.