It is almost the new year, and that means that I got to squeeze in these last few Costa Rica posts before starting anew in 2015 (fingers crossed).  What does the future hold for Mastication Monologues?  The sky is the limit I think if I keep up the great material, and all you readers out there keep on enjoying my posts.  Plus, I just got picked up to write for Localeur, named by Forbes as one of the top travel apps of 2015, so things are already turning up Milhouse.  More to come on that.  Anyway, today’s entry is going to be quite the sweet treat that began over breakfast back in San Jose.  If you want to read from the beginning of our vacation, click here.

Day 4 in Costa Rica started with a fresh breakfast of delicious mangos that were served up in an exquisite manner by Janice. 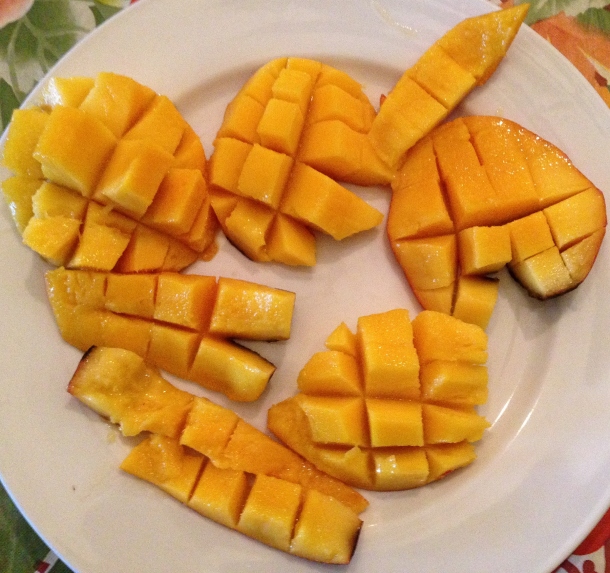 We had bought them a day earlier at a roadside fruit stand that went beyond apples and oranges.  After taking a bite, I became ravenous and destroyed the rest of the super sweet and satisfying pulp.  Having all of this fresh fruit around was yet another reason we came to love Costa Rica.  We met up with our group and proceeded northeast from San Jose toward Braulio Carillo National Park.  Before we got there, we had a rest stop at a roadside restaurant and gas station.  We were still hungry after our mango breakfast, so Janice and I got empanadas to go.  It was the perfect mini meal.  They were fried and greasy which I loved, and they were stuffed with a ton of ingredients. 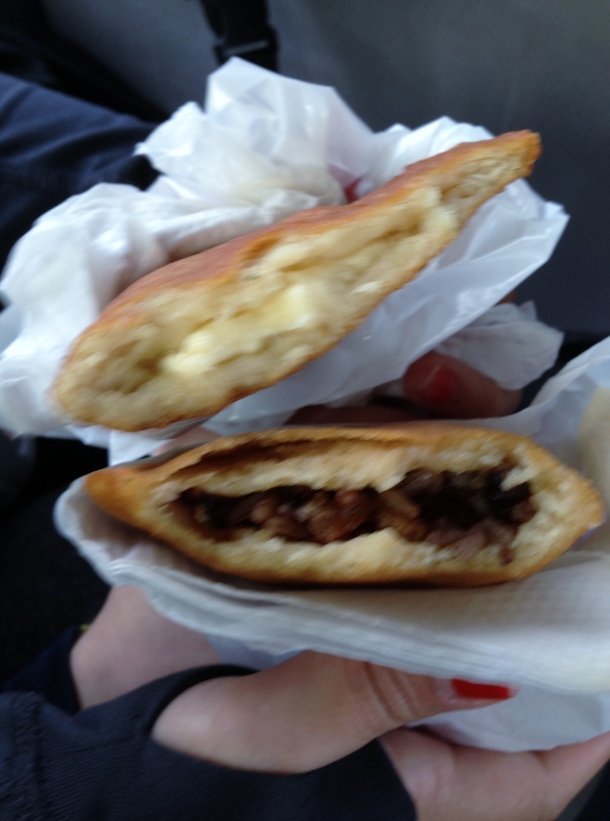 Janice’s had a lot of smooth but not very bold cheese, but mine was a whole lot better.

It was filled with gallo pinto which we first had on day two before our Pacific cruise and chicharrones or fried pork skins.

It was best breakfast for on-the-go Ticos (“Costa Ricans” in the local dialect) which combined semi-savory rice, hearty beans, and crunchy yet chewy pieces of pork.  When we finally arrived at the national park, we started on the trail toward the chocolate presentation the forest rangers had prepared for us.  At one point in time, we passed over a huge river while being hooted at by a family of howler monkeys.  The jungle was getting more and more humid as the drizzle came down around us like a wet blanket. We eventually reached the theobroma, the variety of chocolate grown there (“food of the gods” in Greek), trail that led to the presentation pavilion. 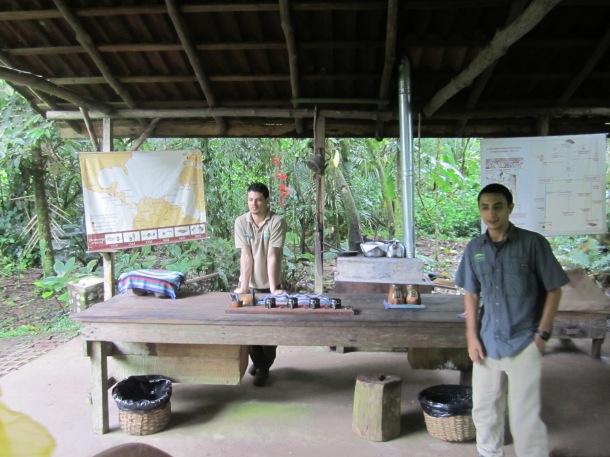 Being a chocolate lover, I was greatly intrigued being in the heartland of where one of my favorite types of candy originated.  We started with an introduction to the cacao pods that grow in the jungle, and the white seeds that can be found in the fruits.

Our guide gave out free seed samples to eat, and the key was to suck on them until the white pulp melted away. 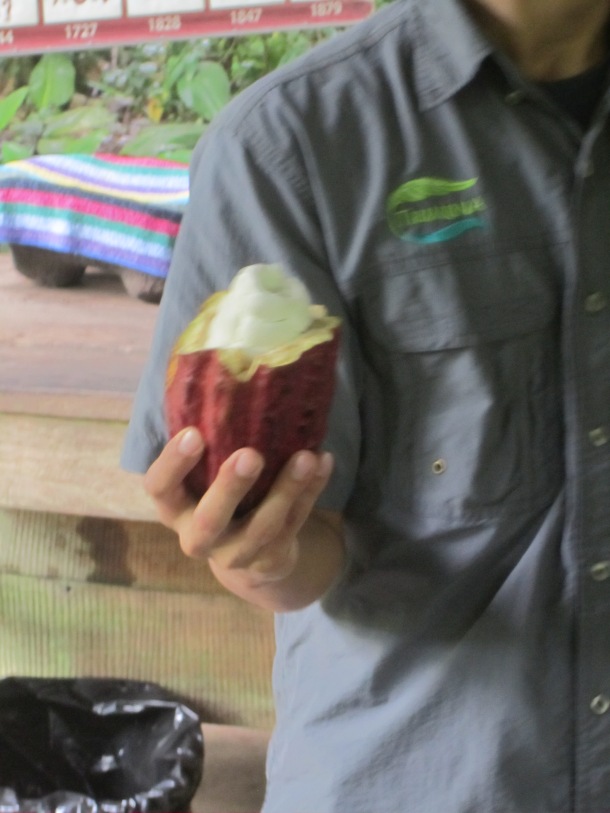 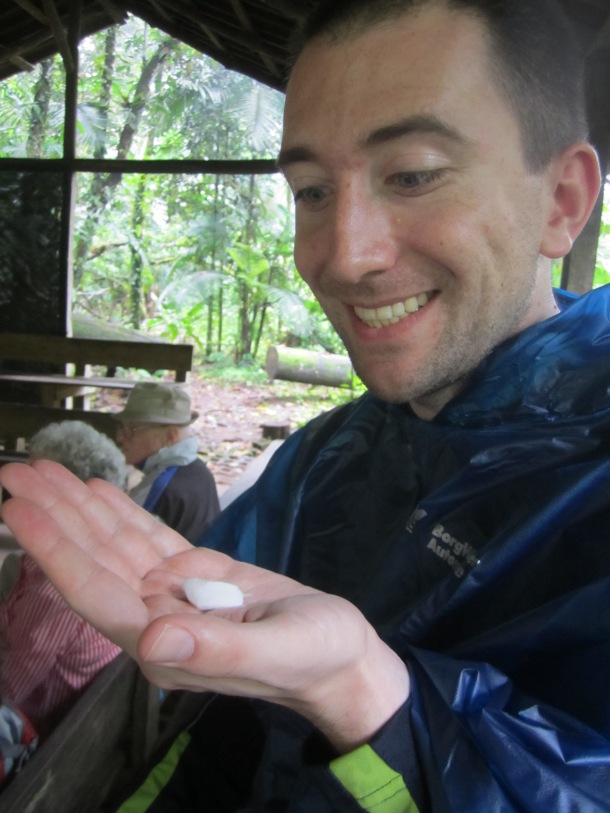 It tasted like lychees actually, but then the seeds were needed for the next step in the chocolate making process.

We learned that the early Mesoamericans ate and spit out these seeds throughout Latin America while migrating since it gave them energy for the long hikes.  These migrations combined with seed spitting led to the spread of cacao plants both north and south of Costa Rica.  After handing our slobber-coated seeds back to our guide, he showed us the second step in chocolate production:  fermentation. 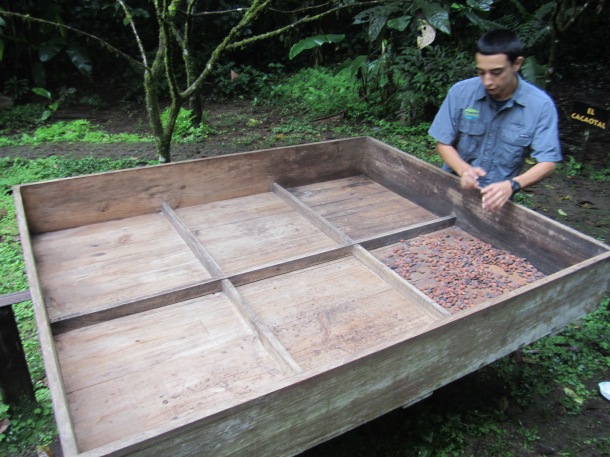 These seeds are placed in a large box with micro-organisms that eventually results in a completely pure bean consisting of cacao solids and cocoa butter.

We could taste the beans, and it could be likened to a 80% cacao dark chocolate bar. 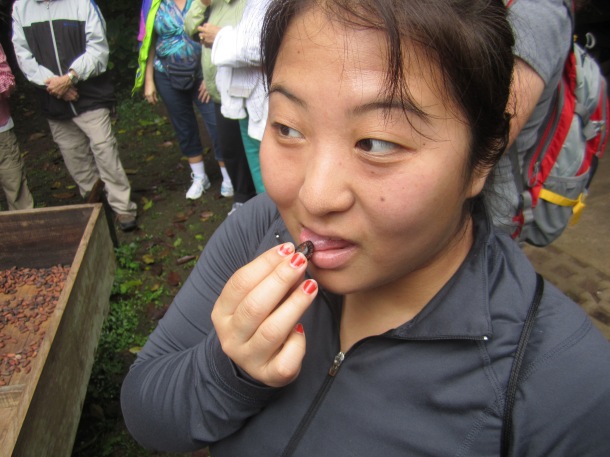 The next step in the process took a turn for the historical.  The presenters took out a large volcanic stone basin known as a metate and a super hot stone called a metlapil, both Nahuatl words for the Mayan tools used in chocolate grinding.  As one of the guides got down to business, he offered us the chance to try our hands at making coarse cocoa powder.  I went first, and I couldn’t believe how stoic the guide was when he was using the metlapil.  I could only hold it for two seconds at a time tops it was so hot.  Janice tried it too, but she was smart and used her long sleeps as oven mitts.

After a couple more minutes of playing Mayan hot potato, a semi-fine cocoa powder resided in the metate.  However, our main guide informed us that when Spanish nuns arrived after the Conquistadores, they realized they could make this bitter Mayan treat a lot more palatable for Spanish tastes by adding sugar and cinnamon to the mix. 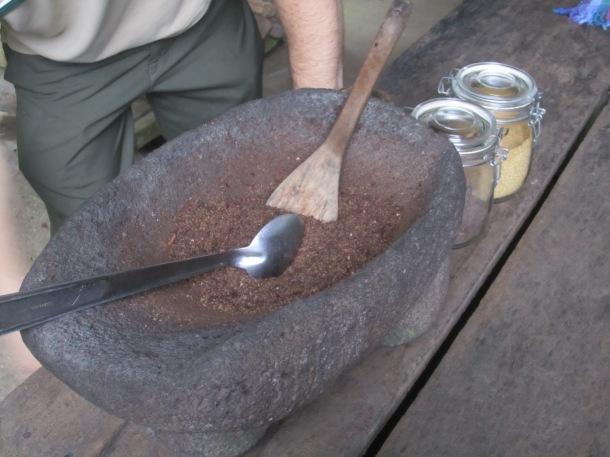 We also got a chance to try a European grinder that was a lot more labor intensive, but you weren’t burning your fingerprints off in the process. 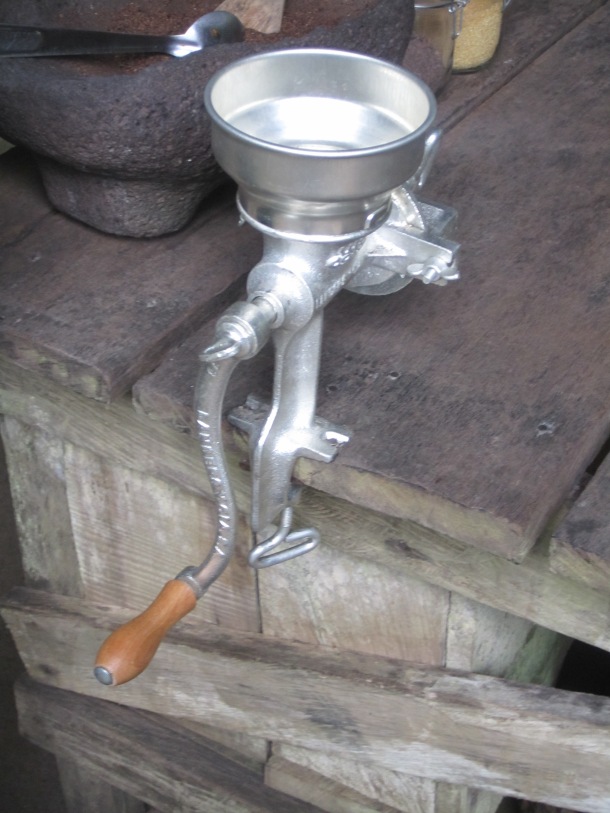 Once finished, we took the very fine powder and mixed it with hot water to make one of the most sacred drinks of the Maya.

It was only served to the upper classes, priests, and kings.  The Mayan chocolate drink was then made to be frothy by pouring it back and forth between cups to get the ideal espuma or foam on top.  You can see a Mayan illustration of the process behind our guide in the picture below.

However, the Spaniards disliked this drink, known in Nahuatl as cacagua, because it was bitter and literally means “poo water” in Spanish (caca + agua), and probably tasted like it to them before the addition of sugar and cinnamon.  We also saw how the Spaniards made the drink frothy by using what looked like a 16th Century egg beater.

Then, in true Maya fashion, we were allowed to put in some classic additives the chocolate producers would introduce to their varieties to make them more popular.  In this instance we had corn starch, ground pepper, chile, cinnamon, and vanilla.

Too bad they didn’t allow us to mix in some tobacco and smoke it as the Maya once did.  Instead of scorching my lungs, I went for a literal hot chocolate with a lot of chile, some ground pepper, a dash of vanilla extract, and some corn starch to thicken the drink.  It was plenty spicy, but I didn’t note any thickening of the watery mixture. 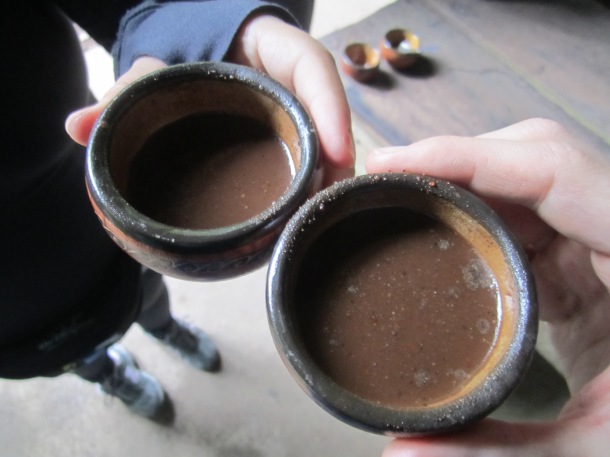 The chocolate was sublime as we sipped to the sound of the gently falling rain and the rustling of agoutis in the underbrush and calls of exotic birds in the distance.  After that, we heard that the chocolate powder to make chocolate bars is first pressed to separate the cocoa butter from the cacao solids.  This is where our guide dropped a huge bomb on us:  white chocolate is not chocolate!!  What it actually is is a bar of cocoa butter, sugar, and condensed milk.  Basically it’s eating a bar of fat with no chocolate involved.  After pressing, the cacao solids are then melted in a kiln and the result is liquid deliciousness.

We got to eat spoonfuls of the milk chocolate goop along with two fresh chocolate shapes. 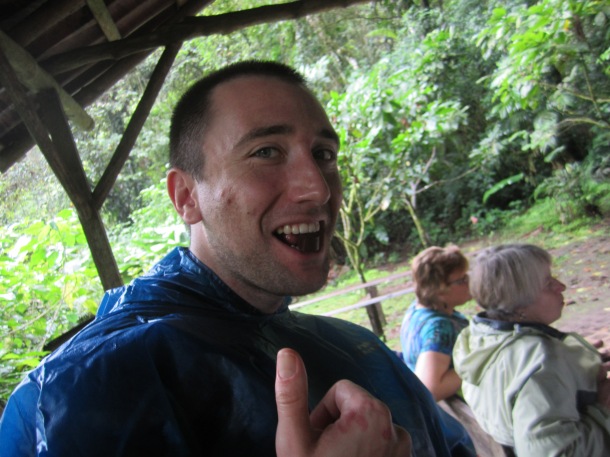 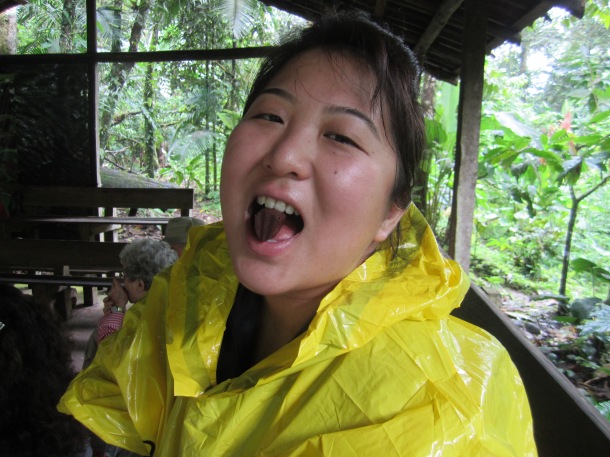 To end the demonstration, we got a bag of cocoa beans that we could cook at home or exchange for post cards.

Like Gollum, I kept my precious to eat at home.  On our walk back through the forest we saw real cocoa pods on the trees that were infected with a fungus that shut down the chocolate plantation that used to be in that very same jungle.

This fungus devastated the chocolate industry in Costa Rica, and that’s why the biggest chocolate producers are in West Africa now.  We went back to the entrance for lunch which was another buffet with rice and beans, but there were also three new items on the menu:  heart of palm, fried yuca, and chayote.

The heart of palm is a vegetable that literally comes from within certain palm trees, and I could liken it to a non-offensive artichoke.  The fried yuca literally tasted like deep fried potato slices, and the chayote tasted like squash. 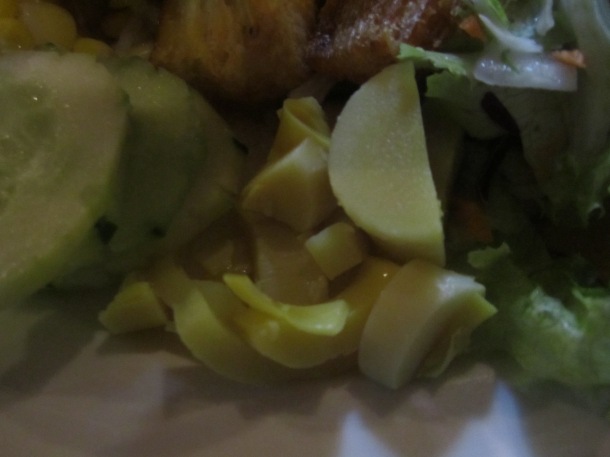 Heart of palm and chayote

For dessert, there was flan that was not too runny that I really enjoyed especially with the drizzle of super sweet caramel on top.

Once we finished our tour in the national park, our bus driver took us back to the roadside restaurant and gas station where we got our empanadas in the morning.  Janice and I broke off from the group with our new driver, Rigoberto, to go to the Caribbean coast since we were going to see the Sloth Sanctuary the next day.  After a long drive and night had fallen, our cordial driver stopped in the port city of Limón.  Our condo owner, Mark, warned us of drug trafficking and violence in the town, and it fit the bill.  Large groups of shady guys hanging out on street corners.  Prostitutes chilling outside truck depots.  Kids lighting off firecrackers in huge groups of people that could have been mistaken for gunshots.  Rigoberto, a native Costa Rican, looked super wary as we parked the car outside a typical Costa Rican greasy spoon diner or a “soda” in Costa Rican Spanish called Happy Landing.  He made sure we left nothing in the car, and looking at our surroundings I could see why when he said many people don’t like to come to this area.  We walked in, and the place could have used new lights and a new coat of paint. 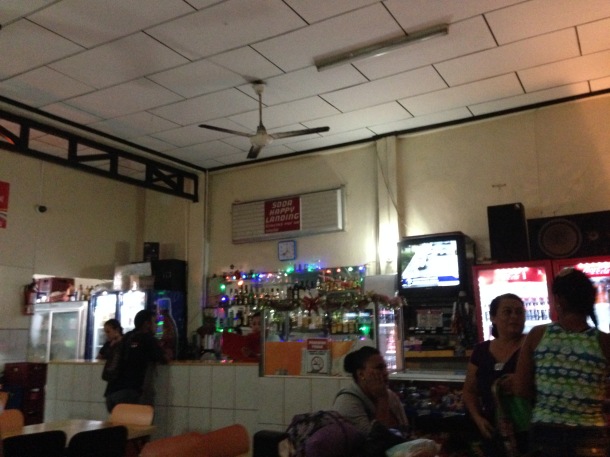 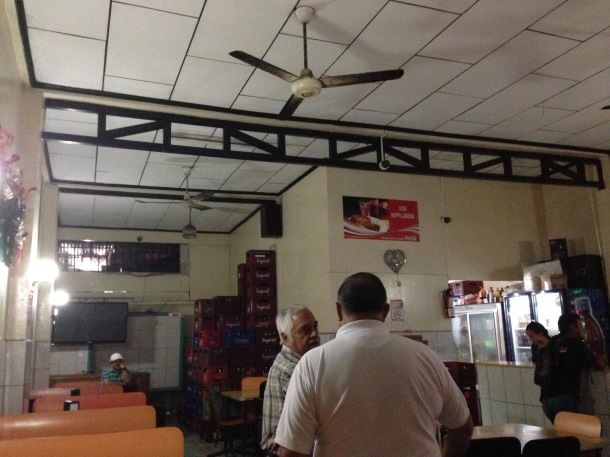 We looked at the menu, and it was all Chinese food!  Classic Costa Rican cuisine haha.  I decided to get the chow mein, and Janice just got fried chicken.  While we were waiting, Rigoberto got randomly pulled into a convo with a guy who had at least ten empty beer bottles in front of him on the table (see pic above; drunky is in plaid).  Eventually, my food came out, and it was the most ridiculous Chinese meal I’ve ever eaten, and I’ve eaten some interesting things in China. 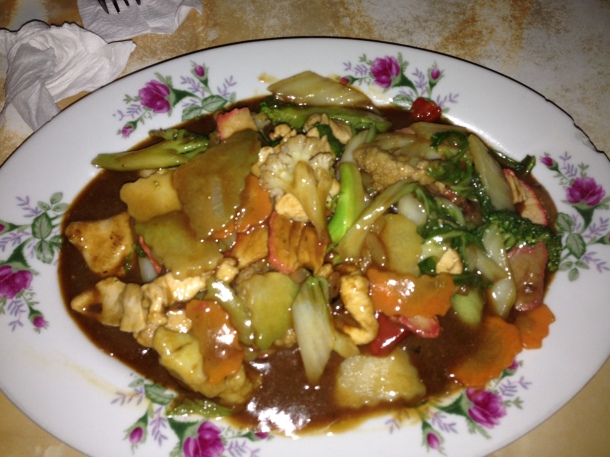 They fried the noodles, and put them on the side like a bread basket or something like that.  The ingredients were all mushed together and not very flavorful.  Janice’s fried chicken came out way later than my plate or Rigoberto’s for some reason, but this diner was not worth stopping for.  We safely made our way out of the drug port and deeper into the dark jungle to find our hotel.  Rigoberto hadn’t been to the coast since 1986, so he was as lost as we were.  Google Maps to the rescue!  We eventually had to traverse a dirt and gravel path in the jungle to get to our destination, Kenaki Lodge, that was across from the beach.  The gates opened, and we were greeted by a French woman and her poochy parade.

We quickly became friends with them, including my best bud the Great Dane.

It was a long day of adventures and food sampling that left us looking forward to the day to come as we fell asleep to the sounds of the waves crashing on the beach.