Too Good To Leaf

Welcome one and all to another Mastication Monologues!  There isn’t much time to spare this summer in Chitown, so you must take advantage of the great weather before the deathly cold comes and the white walkers take over.  So, I’d like to tell you about a great restaurant we’ve been to before during the winter but could also be a wonderful hangout in the summer.  That place is called Hopleaf Bar.

This establishment is located in the quaint Andersonville neighborhood on the North Side of Chicago.  There are a ton of great brunch places up and down Clark Street, but Hopleaf is more of a lunch and dinner establishment.  There is only street parking, but expect plenty to be found.  Given the name of the restaurant, Hopleaf focuses intensely on the pursuit of the best and most unique brews around.  Due to the focus on alcohol, you have to be 21 or over to enter, and that means there are no children allowed (No offense, but huzzah!).

We were a bit surprised about this policy when we walked in, but we also found out that there are no reservations.  So, we had to wait a bit for a table.  Be prepared to wait for a table if it’s a very nice day/night out or if it’s a weekend. 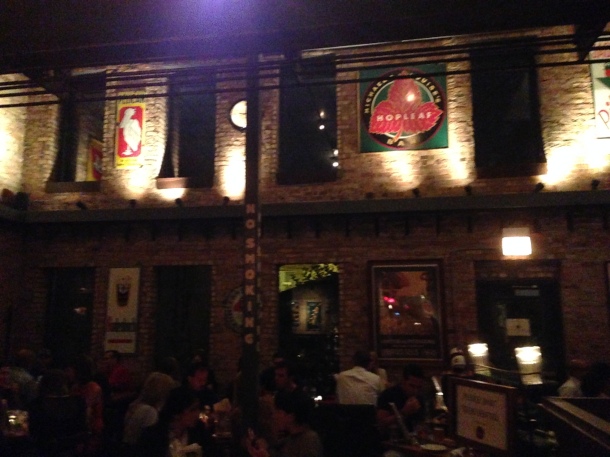 Eventually, we were sat in the bustling back room that gave us a first hand look into the glass-walled kitchen.

We were first presented with a beer menu that was extremely varied in terms of craft beers, but I found one that really caught my eye.  It was called Etrusca Bronze from the Dogfish Head craft beer company ($9).  The description is below,

but basically it is part of a series of ancient ales that the company has brewed based on recipes from millenia ago found all over the world.  In this case, my drink was based on a 2,800 year old recipe that was synthesized from analyzing the resins inside drinking vessels found in Etruscan tombs.  I’ve been throwing around this term “Etruscan” like nobody’s business, but who exactly were these people?  Basically, they were the tribe of people who gave birth to Rome after settling on the Tibur, but it is still up for debate where exactly they originated from.

Anyway, I’ll leave that for the history scholars to decide.  Back to the beer.  When it came out, it was served in a goblet, and it looked like a cup of warm cider.

I gave it a sniff before imbibing, and I was taken aback by the aroma that overtook my nostrils.  It made more sense when I looked at the variety of sweet, savory, and aromatic ingredients it was brewed with like pomegranate, clover, wildflower, raisins, chestnuts, and even myrrh, an ancient tree sap that was used as perfume, incense, an embalming agent for Egyptian mummies, and even presented as a gift to Jesus by one of the three kings.  Clearly, I wasn’t in bland lager-land any more.  When I finally took a sip, it was one of the most unique and complex beers I’ve ever tried.  The honey notes were tempered by the pomegranate juice that had a very subtle nuttiness compliments of the chestnut.  This was further embellished by the wispy wildflowers still dancing in my nose that joined the flavor party on my tongue.  Long story short, this isn’t a drink to be pounded during a game of flip cup, but if you appreciate something super unique or are a historically obsessed weirdo, then you found your beer.  This distinguished beverage prefaced one of the most epic meals I’ve ever had.  Unfortunately, Hopleaf’s menu, both beer and food, changes with the seasons, so some of the options I talk about may or may not be served when you visit like my pastrami sandwich ($12), for example.  This was a straight old-school dish from the turn of the 20th Century New York deli culture. 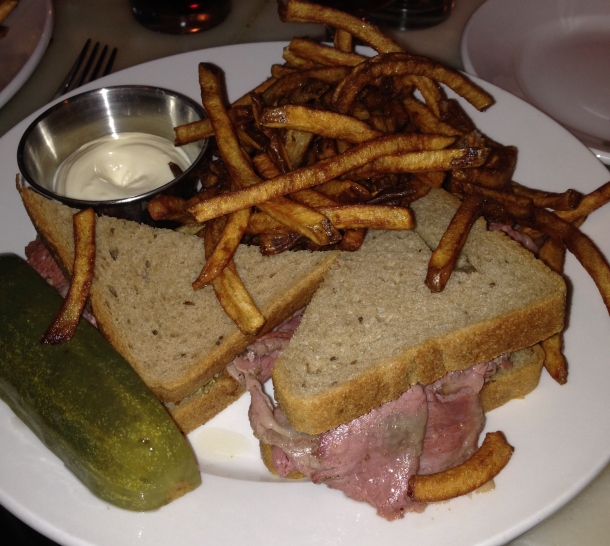 From the rye to the thick layers of beet red meat, it was simple in form but exquisite in flavor.

The combo of herbal caraway with the saltiness of the meat was wonderful, but I would suggest finding a heartier form of rye since it was on the dryer side and crumbled under the pressure of my powerful jaws.  The fries were just my type since they were on the softer side with the occasional crunchy one, but I found their smoky taste intriguing.  Naturally, the pickle on the side was an homage to this deli staple, and it was large, crunchy, and sour.  Yes, please!  Janice’s choice, the duck Reuben ($13), upstaged its fellow New York sandwich.  The origin of the sandwich’s name is a point of contention.  Some parties state that it was named after Reuben Kulakofsky, a Lithuanian born grocer who held poker games at one of Omaha’s premier hotels in the 1920s and 1930s.  Other’s believe that this savory snack came from Arnold Reuben, the owner of the now closed Ruben’s Delicatessen in New York.  Arnold claimed to have come up with the “Reuben special” back in 1914.  Whoever invented it, I doff my proverbial cap to them.  It’s a wonderful combo of meat, bread, and condiments.  First, it was on toasted marble rye that was heartier than my basic brown rye. 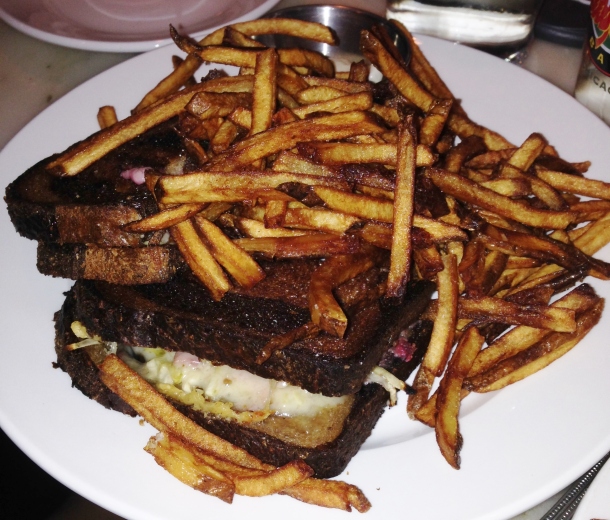 Then we got to the heart of the matter.

Instead of finding the typical pastrami, we were greeted with thin slices of slightly fatty Peking duck breast that also possessed traces of caramelization due to its traditional preparation.  This sweetness was further garnished with a cranberry cream cheese spread that took the place of mustard or Russian dressing to give this typically savory sandwich a sweet side.  To top all of it off, there was a moderate helping of acidic sauerkraut to cut through the sweet elements, and the gooey melted Emmenthaler cheese held all of these mouth-watering ingredients together.  I highly recommend both sandwiches!

So if you’re looking for a laid back beer heaven or a date night without the kids, check out Hopleaf Bar!

Hello to everyone out there and welcome to another edition of Mastication Monologues!  Today’s review partially comes from curiosity but also from an urge to get out of my apartment and check out what is actually in the building I live in.  I’m kind of cooped up right now due to a foot injury from soccer, but here’s to hoping it heals fast!  Anyway, everyday I walk into my building and see a chicken and beer restaurant right across from my elevators.  Not only is this combo a great Ludacris album, but these restaurants are all over Incheon and South Korea metropolis’ in general.  However, one of the key elements of this restaurant in terms of decor is the fact that they use the Hooters owl logo but have changed the name to Boors.  Nevertheless, I hobbled downstairs to see whether this place could measure up to the classic Southern staple I know and love back home.

The actual restaurant wasn’t too big, but the guy running it was quite friendly.  He didn’t really speak much English, but I was able to tell him that I wanted four pieces.  He fried them up in front of me which was a nice change from the mass-produced fried chicken that is sitting under heat lamps all day.  Eventually I got my four piece box and a mystery item in a pojang pongtu (to-go bag) for the low low price of 5000 won or roughly 4 bucks.

It says, “Health food” on the box. Good one

When I opened up the box, I was greeted with two breasts and two wings.  Plus, I found he put a small packet that I didn’t initally see him put in the bag.  When I opened it up, it was salt…as if fried chicken wasn’t more unhealthy for you, they want to just amp up the possibility of you getting atherosclerosis.  Oh Korea.  Health concerns aside, I tucked into the first piece, and I was pleasantly surprised at the breading and quality of the chicken.  There was a certain lightness and absence of grease in the skin that made it taste different from KFC or Popeyes.  The chicken was all white meat, but  like most things in Korea, not hulking in size in comparison to food portions in the USA.  The wings were a bit of a let down since they were mostly bones and cartilage, but then again, when aren’t they a letdown unless they’re the real Hooters wings?  I even added a little gochujang (red pepper sauce) I had in my fridge, and it provided a nice, semi-bbq flavor to the crispy fried skin.  Once I finished the chicken, I opened the mystery container which looked like it contained some sort of white, translucent cubes.

Some pickled veggies with your deep fried meat?

Upon closer inspection, I thought they were rice cakes, but they were floating in a thin, clear liquid which is odd for rice cakes.  Once I ate a cube, I realized it was some sort of pickled radish that had a slightly sour aftertaste and a semi-crunchy texture.  It was an interesting compliment to fried chicken.  Perhaps they think people who eat this food need to get some sort of vegetable into their diets even if they are pickled.

Overall, I would recommend Boors to anyone in Korea who’s craving a little deep-fried, American goodness if you’re getting tired of tonkatsu (even though that’s impossible).  It makes up for the lack of scantily clad waitresses with quality service and a delicious recipe for fried chicken.