Little Bucharest: All the Meat That’s Fit to Eat!

Romania.  A linguistic anomaly in Eastern Europe along with mostly being known for gypsies and the Prince of the Night, Dracula.  However, a trip to Romania back when I was studying in Spain left me with a different impression of the nation.  It was a bit off the beaten path in terms of the tourist trails of Europe, but it had plenty of character, friendly people, and great food.  So, when my girlfriend said that she had a Groupon for a Romanian eatery in Chicago called Little Bucharest, I was more than excited.

It was a cold and rainy night, similar to the weather I experienced while traveling between Bucharest and Sighisoara, so I was having a serious case of deja vu minus the feral dogs running around in the street and the airport.  It had a charming exterior with a patio that obviously wasn’t being used that night along with a fountain.

Upon setting foot in the establishment, we were warmly welcomed by the staff and led quickly to a table.

The cheerful music and clean interior put me at ease since other Eastern European restaurants are a bit more rustic in terms of their setup.  To drink, Janice got a sweet red Romanian wine, and I got a beer from Timisoara.  It seems the alcohol content was a bit much for her along with its sugary aftertaste, but it was still enjoyable.  As for my beer, it was a light lager that could be comparable to Heineken.

We also destroyed a basket of fresh baked bread that wasn’t warm, but they said they baked it in the morning.

This definitely showed in the overall quality of the sliced loaf.  It was chewy but slightly crispy on the outside while the inside was fluffy and white.  We demolished it so fast that the owner came over to say that our healthy appetites for his bread were quite the compliment.  For our appetizer, we got an order of the Mititei ($10).  These little sausages were served with a side of salad, fried polenta, and mustard.

These chubby meat nuggets were quite heavenly and juicy with a heavy emphasis on the garlic, and it seemed to have more beef than pork in the meat blend that jived well with the sour mustard.    The fried polenta (corn meal) was warm but not piping hot.  It also had an enjoyable butter flavor that had overtones of French fries.  As for our entrees, Janice got the sarmale ($18) and I got the chicken paprikash ($20).  The sarmale are similar to Poland’s golabki or stuffed cabbage rolls. 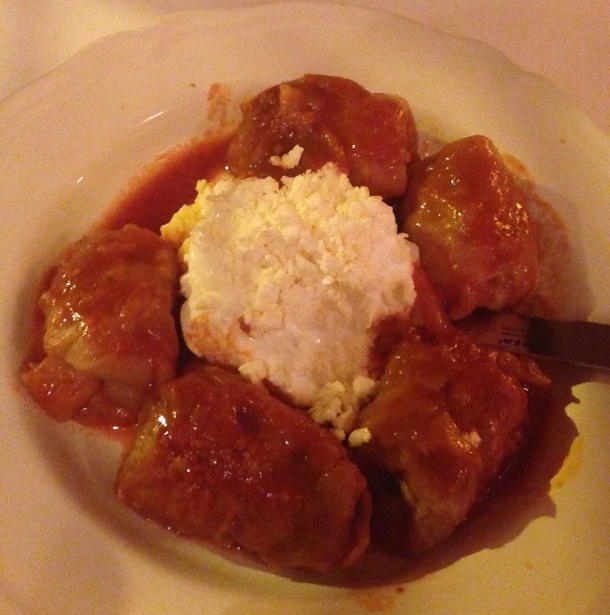 These wee bundles were stewed in tomato sauce which led the cabbage to be extra soft but firm enough to keep all of the pork, ground beef, and rice from bursting forth.  It was a bit more sour than the Polish version of the dish, but it still had the Slavic heartiness common to both meals.  As for my meal, the chicken paprikash was essentially half a chicken in a paprika infused gravy along with green beans and pearl onions.

The sauce was the boss for this dish, and the chicken was falling off the bone.  Beware of the small bones in the chicken though!  For both the sarmale and chicken paprikash, there was mamaliga or soft polenta served on the side.  This was my favorite food I tried in Romania, and it was like going into a culinary time machine for me from the first bite. 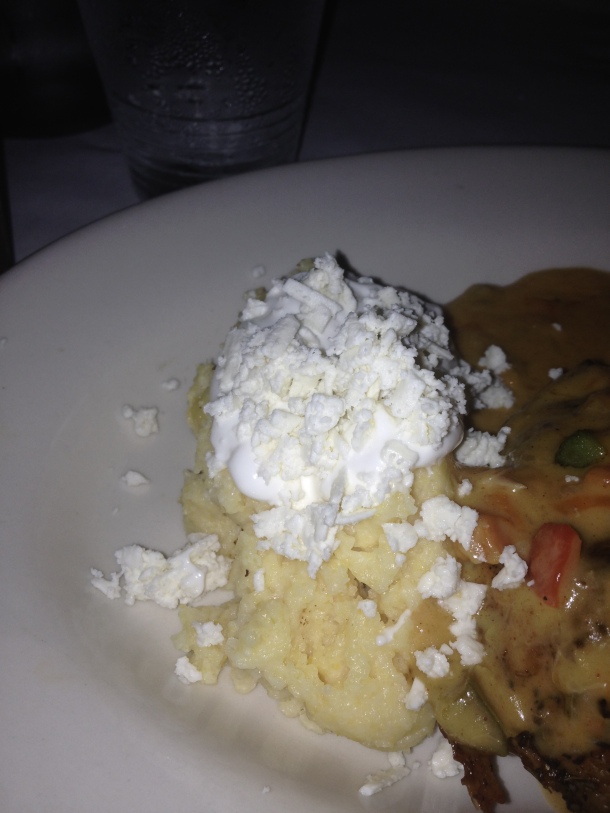 From the smooth, golden polenta to the cool sour cream and strong Feta cheese, I was in heaven.  The only differences between Little Bucharest and the real Bucharest was that the mamaliga in the Motherland was served in a bowl and with a fried egg on top.  Aside from that, it was the perfect comfort food to combat the terrible weather outside.  I couldn’t finish my meal since my stomach was about to burst from all of the polenta and grilled meats, but I didn’t feel bloated like I did with other meals where I ate a lot.  At the end of the meal, we were walking out, and the owner wished us well and told us to check them out on Facebook.  I then told him that I write a food blog, and he was so overjoyed that he hugged me and gave me a bottle of Romanian dry red wine on the spot.

I’ve never experienced such generosity from a restaurant in Chicago or perhaps anywhere else in the world.  Thanks, Branko!

So in closing, we walked away from Little Bucharest greatly satisfied with the friendly service, great prices for huge portions of delicious Romanian fare, and a memory of one of my many distant travels around the world.  This is the real deal if you want to try Romanian food, and they even run their own limo service if you want to experience it in style.