Welcome to another edition of Mastication Monologues!  If you haven’t been following my blog, you are in the middle of my Costa Rican travel series where I recount all of the wild and woolly adventures I find myself in throughout the country (Day 1 and Day 2).  Day 3, today’s post, takes me to a land of oxcarts, hidden volcanos, and hot springs.  Let’s start at the beginning.

The morning started off with a snag as we were locked in our condo complex that was preventing us from getting breakfast before meeting up with our group.  Thankfully, my Spanish came in handy, and we were at Denny’s before you could say “Buenos dias!”.  There really wasn’t anything of note at the American diner aside from the delicious pancakes.  The real highlights came later in the day as we first traveled in the morning to Sarchi which is famous in Costa Rica for their handmade ox carts.  They were a lot more popular and common before the advent of automobiles in the countryside, but now they are mostly used for decorative purposes or collecting.  Before we went to the workshop, our group stopped at a local bakery in the town square that was opposite the largest ox cart in the world! 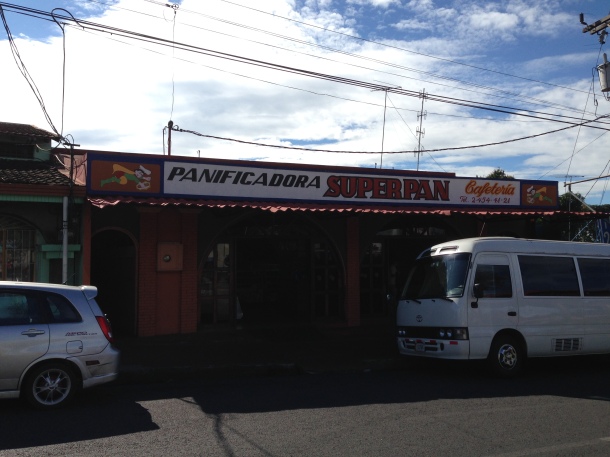 Before seeing this behemoth, we perused all the different types of breads and pastries that were on sale. 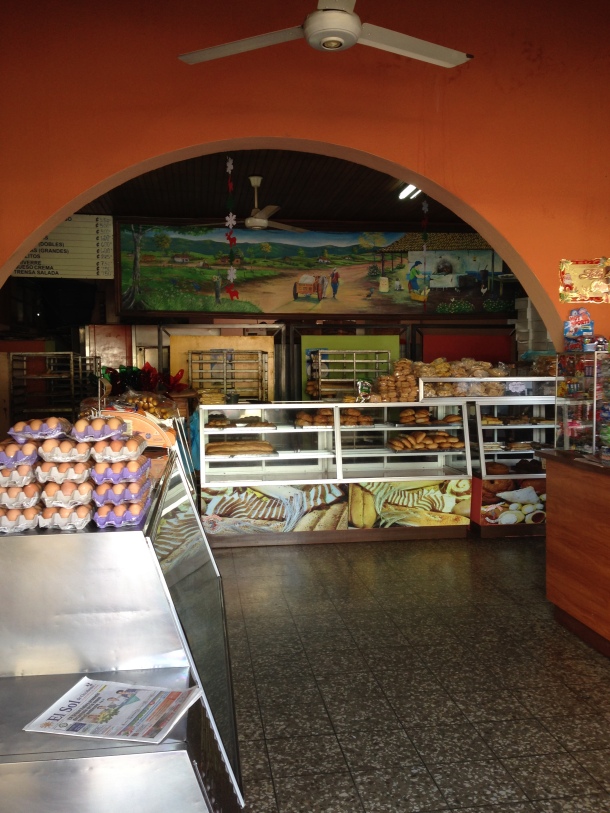 It seemed like they had a lot of different types of bread puddings with different flavors ranging from coconut (Janice’s choice) to pineapple.  I, on the other hand, got a creme pastry that looked somewhat like a brazo de gitano (literally “gypsy’s arm”) dessert from Spain. 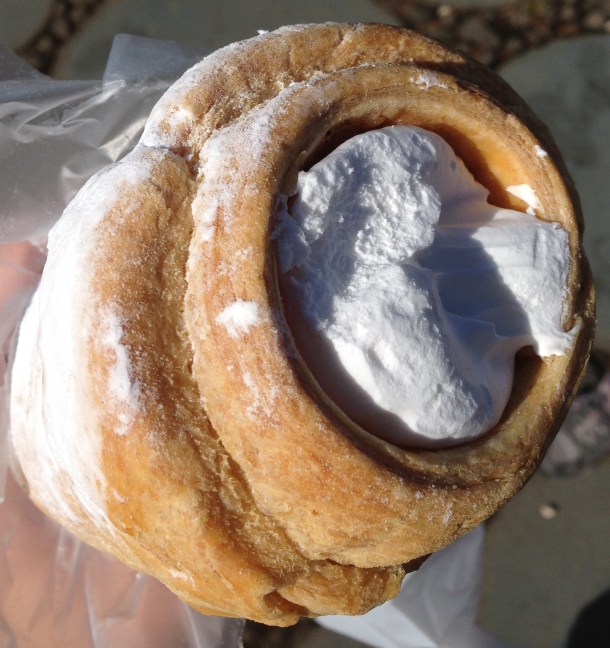 It had everything I wanted for breakfast:  soft pastry dough and plenty of sweet and light whipped filling. 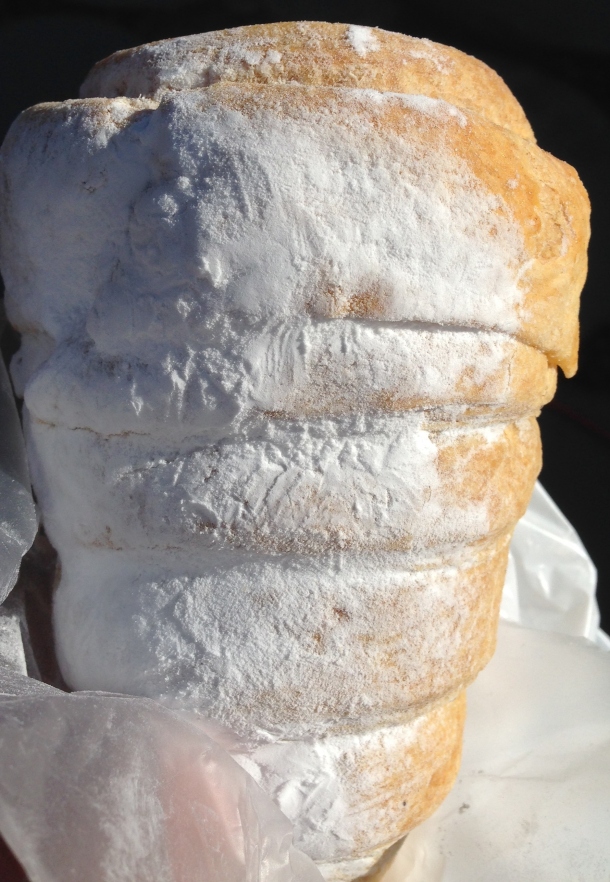 The only downside was the excessive dusting of powdered sugar on the outside that was delicious initially but in the end left me looking like Tony Montana at the end of Scarface. 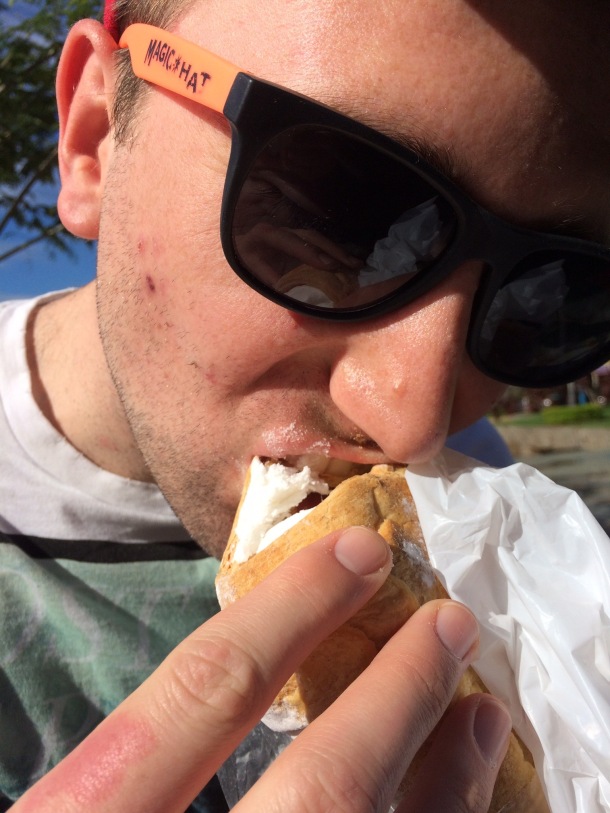 I saved it for later though since it was quite a good amount of sugar in a short period of time.  We had a tour of the Taller Eloy de Sarchi, and some of the artwork was simply spectacular.  The colors were so bright and vibrant it looked like the animals were going to jump out at us. 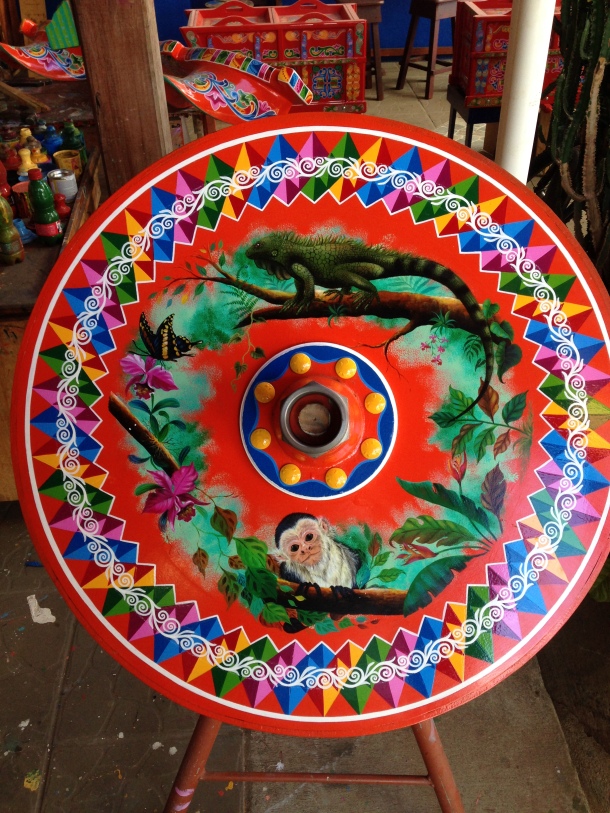 Thankfully, it was just some fancy artwork, and we moved on toward our next destination in the form of the Arenal Volcano.  Once more, we had another roadside stop for food along the way.  This was one of many reasons why I loved our travel group!  This time, it was at a local fruit stand that had some recognizable produce like pumpkins, plantains, and pineapples, but then there were more exotic samples of Costa Rica’s countryside such as purple sweet potatoes and yuca. 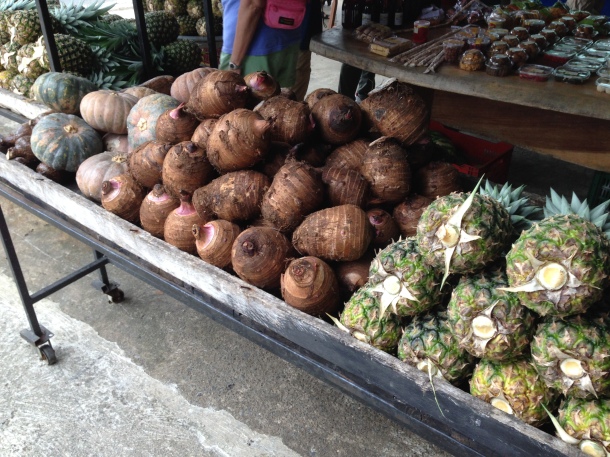 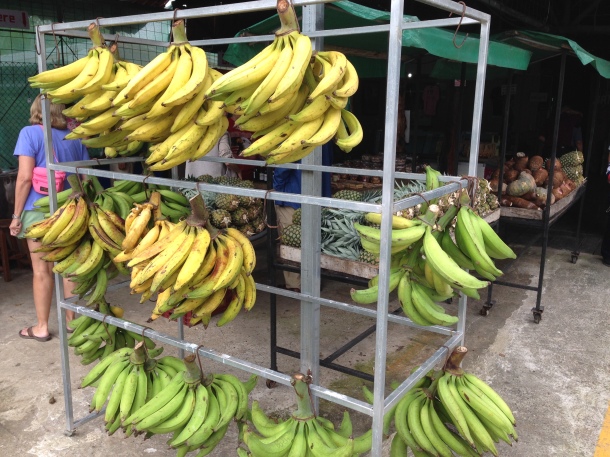 For example, a smaller cart of these odd red fruits that were a bit before the larger fruit shop we were occupying caught Janice’s eye.  She said that they looked like the combination of an apple and a pear.  One of the women in our group bought them, and lo and behold Janice was right.  Our guide informed us that they are known as Malaysian apples.  While their exterior appearance was bold and intriguing, their taste was the polar opposite. 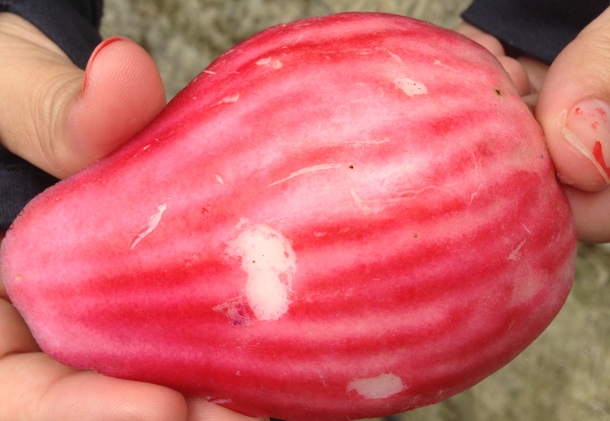 It tasted like a super bland pear that could only be “enhanced” with the salt in a small accompanying bag the fruit hawker supplied our fellow traveler. 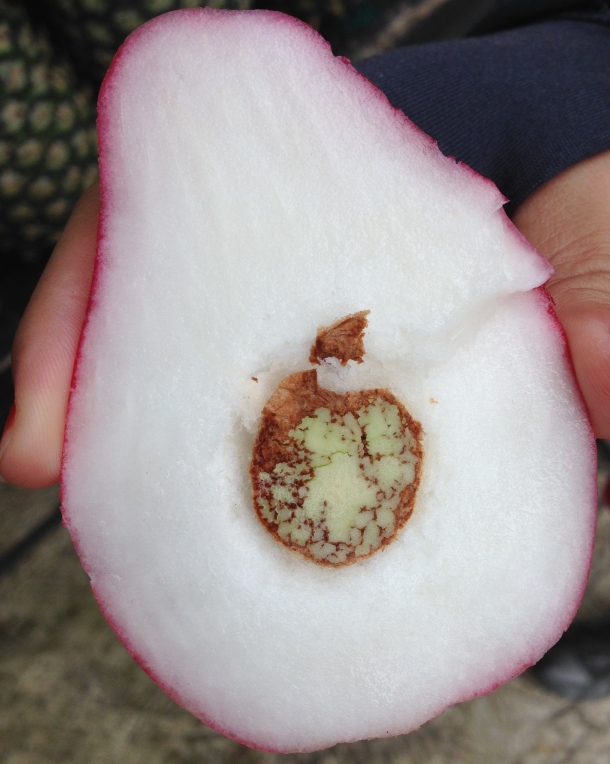 Another interesting entry was the green oranges that were in the same bin as yellow fruits that were completely beyond anything I’ve ever seen. 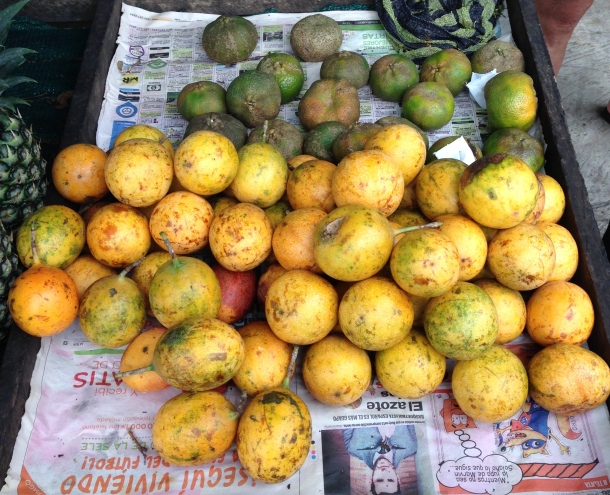 I bought one of the fruits that was slightly smaller than a baseball, and I found out I had to crack it open in order to eat it. 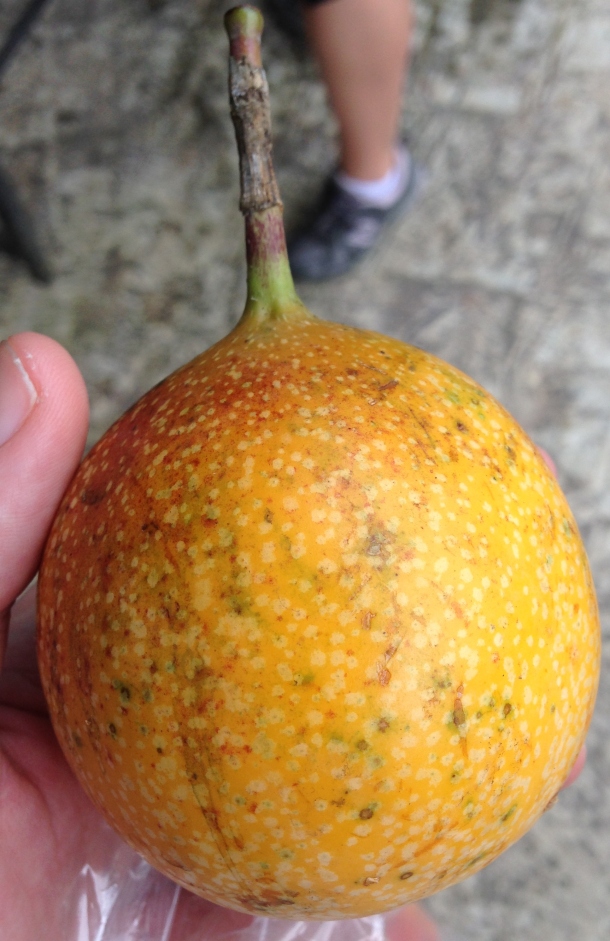 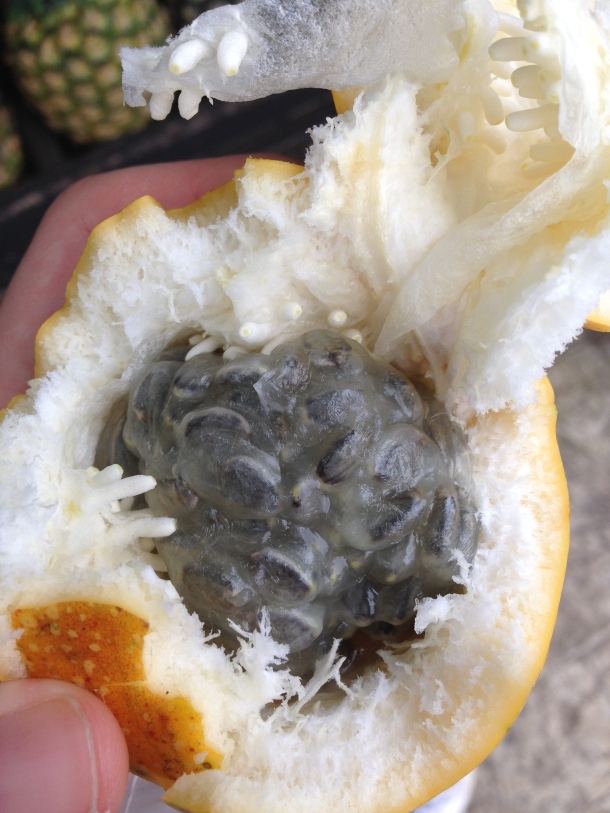 After moving beyond that, I was greeted with a grey, slimy seed pouch that was held in place with small white tendrils.  I learned that the proper way to eat this fruit called a granadilla (“small pomegranate” in Spanish) was to slurp up the black seeds along with the amniotic sack that was holding them. 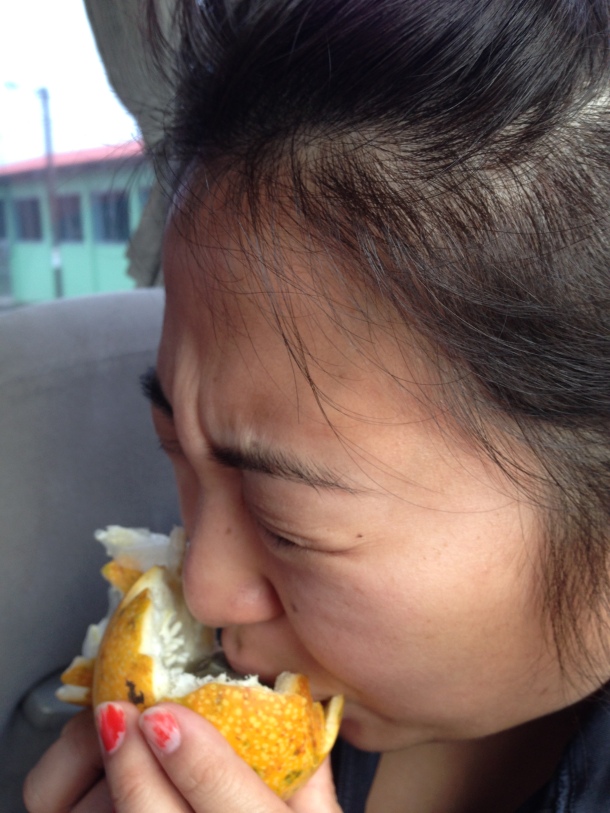 The craziest thing were the edible and very crunch seeds. 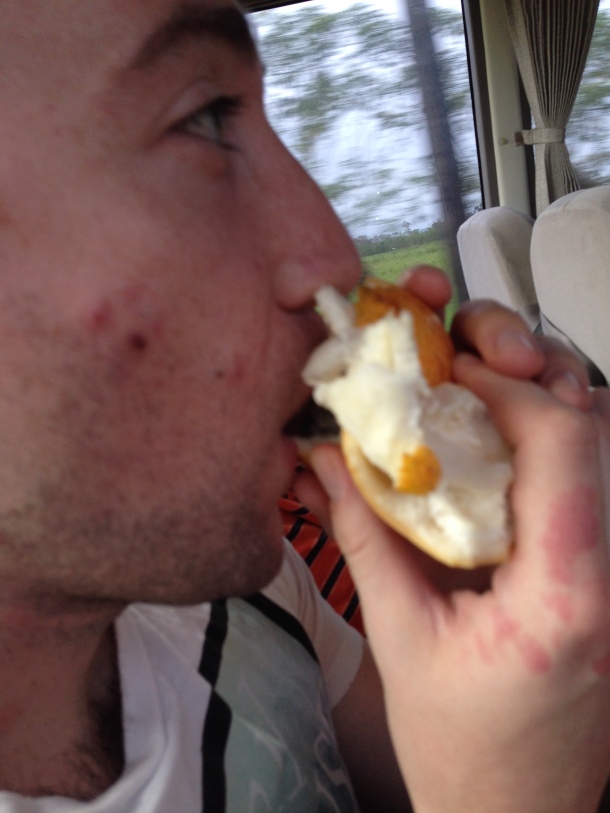 It was overall a good purchase because it was actually quite delicious beyond its bizarre appearance that I could liken to a sweet orange with a tangy lime zing aftertaste.  We also bought some mangos for breakfast later on.  Our visit to the Arenal Volcano was a bust because it was completely obscured by fog and drizzle, but lunch was wonderful.  It was at a very unique restaurant called Restaurante Tobogán or “Slide Restaurant” in Spanish. 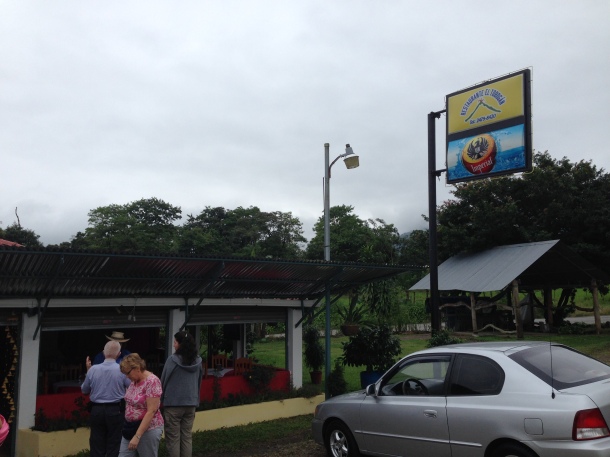 Why would it have such a random name?  Well, because this establishment literally had a giant water slide coming out of the top of it which led to a pool on the side that I’m sure would have been bumping if the weather was more agreeable. 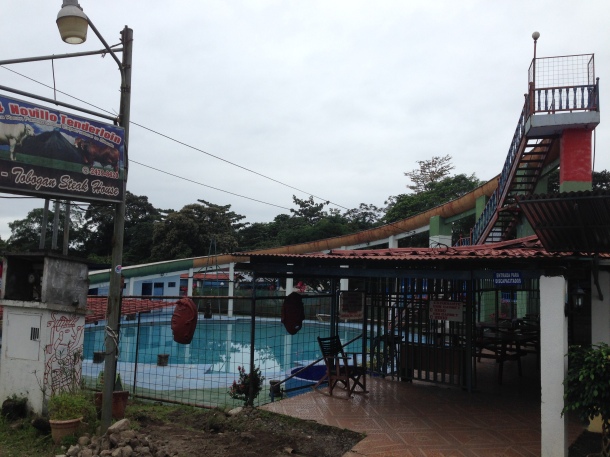 I got the steak fajitas which once again were a lot different from the Mexican variety since there were no sizzling tabletop grills or tortillas to be seen.  The same juicy pieces of grilled steak and onions were there, but they were accompanied with a Costa Rican classic known as casado or “married/married man”. 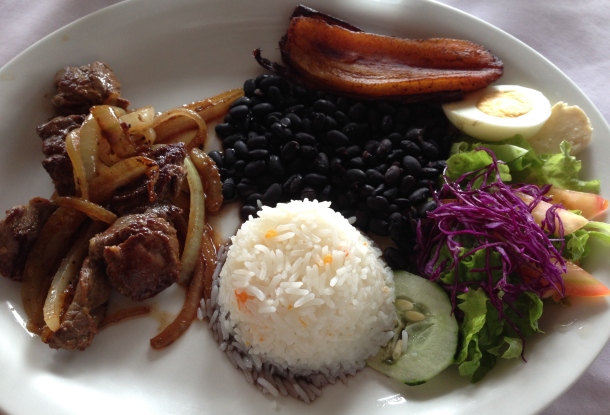 It consisted of white rice, black beans, fried plantains, and a mixed salad.  The name is said to either have originated from customers asking to be served as married men and have the same food in the restaurant as they would at home, or a more plausible explanation would be that the beans and rice are forever linked in gastronomic matrimony.  It was during this meal I was also introduced to salsa Lizano which I could liken to a sweet Worcestershire sauce with a hint of spice. 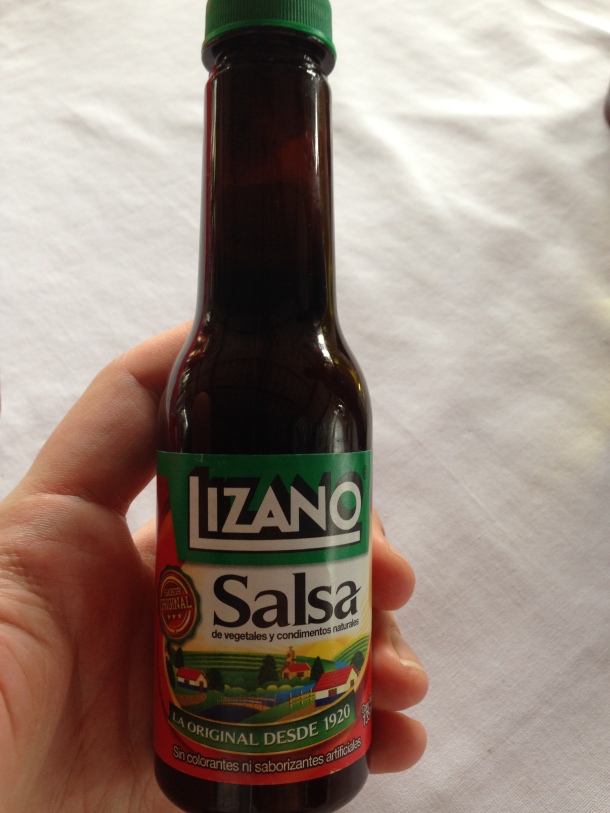 It went great with the fajitas and beans and rice offering a salty/spicy contrast.  I also enjoyed a cool, refreshing glass of guanábana or sour sop juice.  I had tried it previously in south London in a Jamaican restaurant, and I loved it since it seemed like a sweet limeade of sorts.  However, the Costa Rican variety wasn’t as sweet and a lot frothier.  After the meal, we went to Baldi hot springs which was extremely relaxing along with us being able to fly down some water slides since we weren’t able to go down the one earlier in the day. 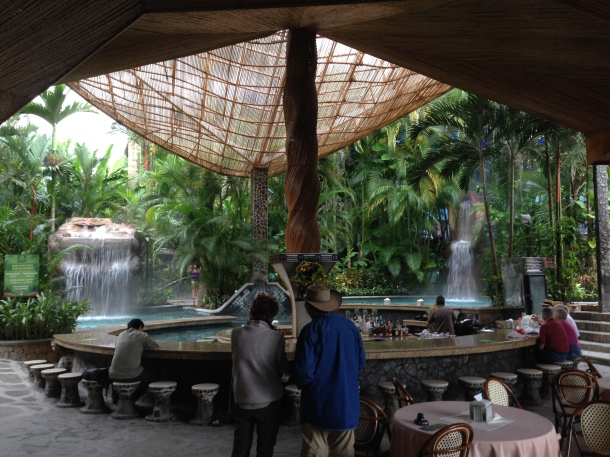 We had dinner at Baldi’s buffet, and most of it I had already tried aside from the Costa Rican version of tamales.  They were very similar to the Mexican version with the cornmeal base encasing seasoned chicken and pork, but the main difference was that they were wrapped in banana leaves and boiled instead of being baked in corn husks.  It was a calming end to a hurried day as we bonded with our fellow travelers over dinner and subsequently rode our food comas all the way back to San Jose for our next adventure.

Que tal, amigos?  If you couldn’t get enough of my food adventures on Mastication Monologues, today I’m bringing you a review of a Mexican restaurant that is well known for their murderous margaritas:  Cesar’s Killer Margaritas.  I’ve passed by it many times while gallivanting about Chicago on the Northside, but I’ve never set foot in the establishment.  Thankfully, I got an opportunity to visit for dinner recently, and it was quite an enjoyable experience. 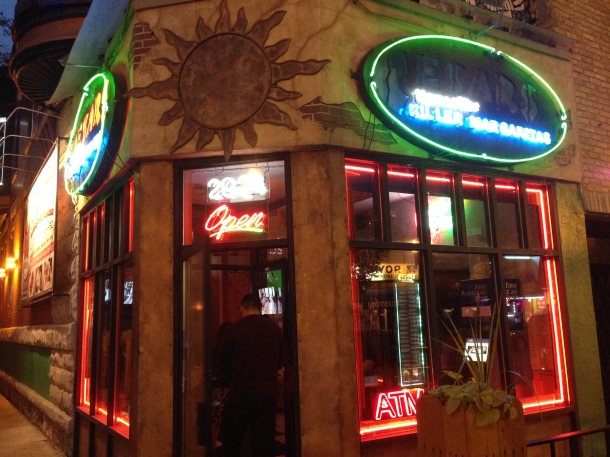 When Janice and I walked in the door, there were a bunch of people waiting for a table sitting along the wall, and that immediately elicited my response of, “Great…a wait”. 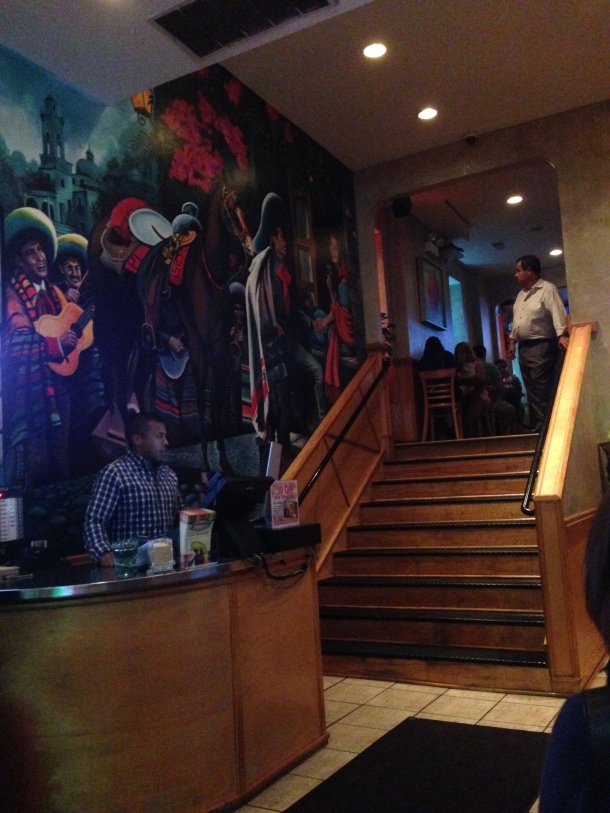 I’ve worked as a host at a restaurant, and I know that giving an estimated table time is a very loose interpretation of how long it’s actually going to be since there are so many variables to take into account.  The hostess quoted us at 10 to 15 for a free table which is the fallback answer since it doesn’t give the customer unreasonable expectations yet doesn’t seem like an insurmountable wait.  Surprisingly, the wait was shorter than estimated, so we were hustled up and down two staircases to get to our table.  Once seated, we immediately looked over the signature margarita menu since we wanted to see if they could live up to the hype.  While they had the usual flavors like raspberry and strawberry, they had nods to Latin flavors with tamarindo and guava.  I got a frozen guava margarita ($11) while Janice got the chilled raspberry margarita ($11).  While waiting, I was systematically destroying the chips in front of me along with the watery but cilantro filled salsa roja that come complimentary with the meal.  Eventually, they were brought out to us, and they looked like any other margaritas.  However, it was a pleasant surprise that they were not too syrupy, and we could taste the liquor as well which let us know we were getting our money’s worth. 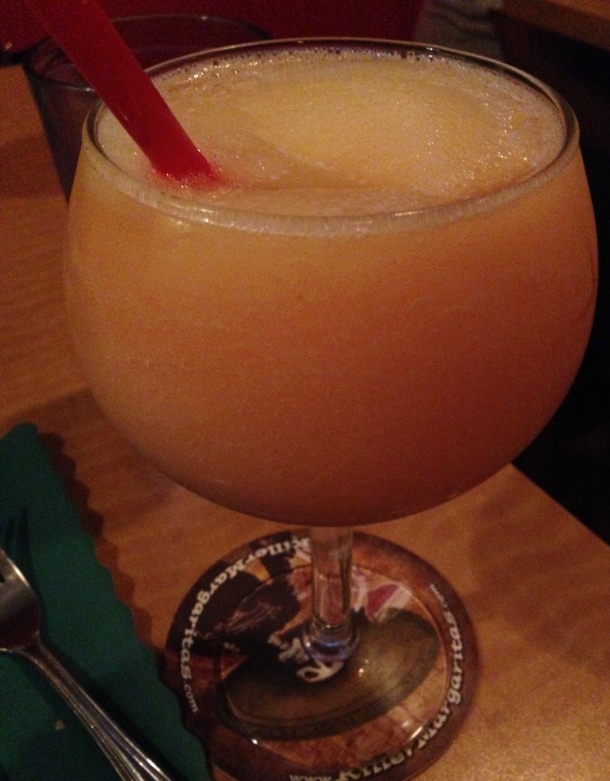 I found Janice’s margarita to be more interesting than mine because it contained something I’ve never seen in a margarita:  fresh fruit. 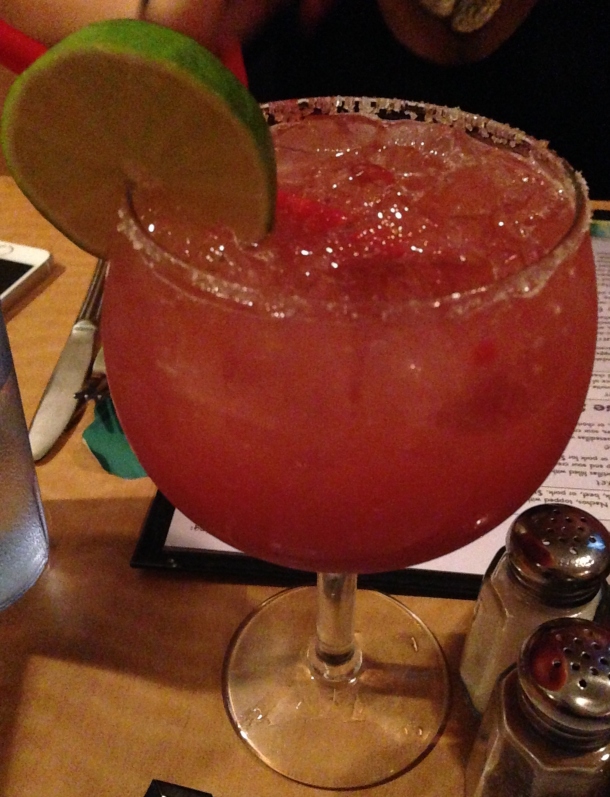 I don’t know if they do this with all of their flavors, but her raspberry margarita literally had whole raspberries floating amongst the ice floes of the red sea of tequila.  It was a masterstroke of tex-mex bartending.  While we were enjoying our frozen beverages, we looked over the dinner menu.  They had plenty of entrees, lighter options, appetizers, starters, and soups.  While they didn’t stray much from the tried and true tex-mex favorites, I decided to go for the steak mini burritos ($10) while Janice got the vegetarian fajitas with steak ($14).  While waiting for our plates to come out, I thought back to another Mexican dinner that I had in London which resulted in me carrying a pair of twin food babies around for the majority of the night.  Thankfully, these burritos wouldn’t destroy me like that chimichanga in Old Blighty.  Before our entrees arrived, we were hooked up with a free cup of what seemed to be tomato soup with noodles. 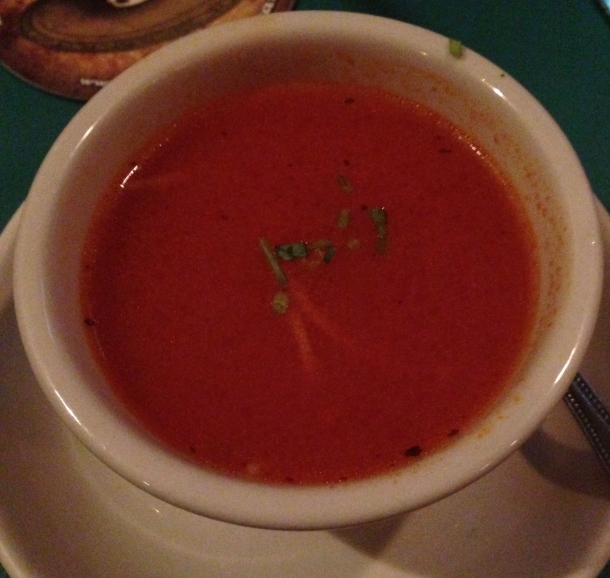 It was flavorful but nothing noteworthy since we could only taste tomatoes.    When they came out, I immediately pounced on them since these plump little buggers looked quite scrumptious under their cheese and salsa verde blanket. 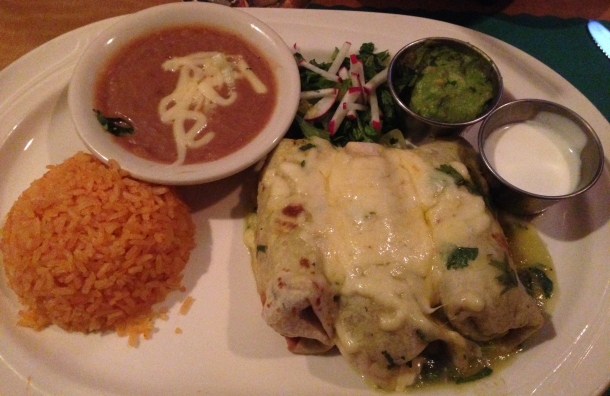 I sliced into them, and the juicy pieces of steak, beans, cheese, lettuce, and tomatoes came tumbling out.  I poured the sour cream all over them while spackling guacamole on each forkful.  Madre de dios, estos burritos fueron de la puta madre! (“These burritos were the bees knees!” in so many words).  The tortillas were flavorful and bursting with gooey cheese and fresh vegetables.  I think the combo of the cool sour cream and the cilantro filled guacamole gave the savory steak a herbal tinge that made my tastebuds scream “Más  Más Más!”.  The Mexican rice was average, but I didn’t even touch the beans.  As for Janice’s vegetable fajitas, they were served piping hot at our table and contained plenty of veggies one typically doesn’t find in Mexican cuisine like cauliflower, broccoli, and mushrooms. 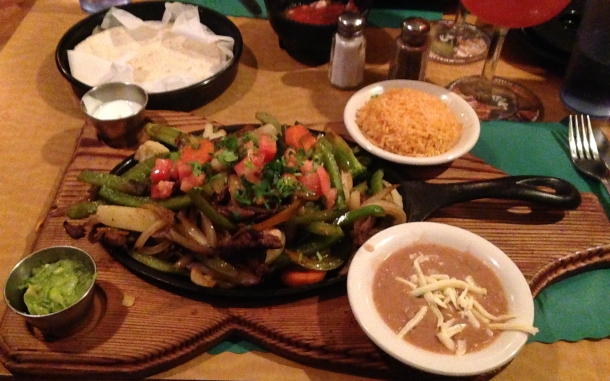 She offered to make me a taco out of the ingredients in her fajita, so I got a mouthful of peppers and onions along with the same succulent steak in my mini burritos. 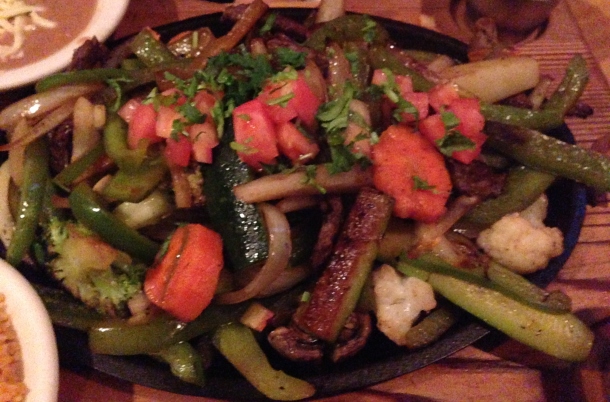 I would have helped her more with the monstrously-sized meal, but I would have needed a second stomach.  I was feeling full by that point in the meal but not to the point of sickness.  It wasn’t the most mind blowing meal in the world since Chicagoland has a ton of great Mexican eateries, but I was a happy customer with the service and food.

So if you’re looking for a fun establishment with well made dishes and unique margaritas, check out Cesar’s!